James Riswick
Today we get our first-ever look at the first-ever 2019 BMW X7 crossover. We've actually already had our first-ever drive in an X7 Prototype. And so, we thought it appropriate to follow that up today with the first-ever X7 comparison of specs between BMW's first-ever three-row crossover with legitimate room for seven and its many high-dollar competitors.

On paper, the 2019 X7 definitely seems to most closely align with the Mercedes-Benz GLS-Class. Their similar dimensions, interior space, engine choices and price would certainly imply where BMW placed the target when developing X7. We used those same elements to determine three-row vehicles likely to be cross-shopped or that should be cross-shopped. These include the Audi Q7, Land Rover Discovery, Volvo XC90 and Lincoln Navigator. Yes, the latter is a truck-based SUV as opposed to a crossover, but tell that to all the people lining out the door at the local Lincoln emporium. They do not care, and neither shall we.

We also included the 2019 BMW X5, which was completely redesigned for this year and therefore not the first-ever. That makes it less appealing? Either way, lining the new X5 up with the SUV that leapfrogs it atop BMW's SUV hierarchy should provide a good idea of just how much more you get by going up a model number. 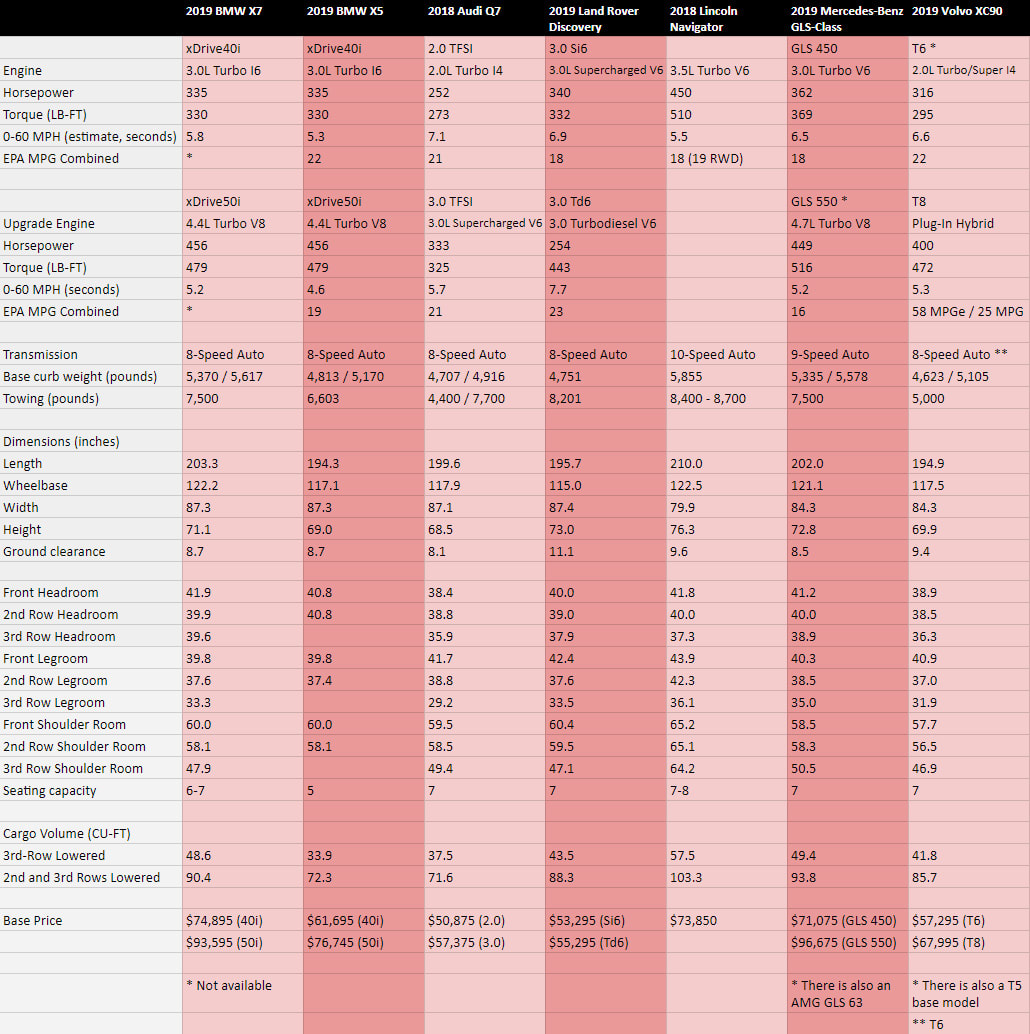 Again, the X7 aligns closest with the GLS, offering a base six-cylinder in its xDrive40i model and an upgrade turbo V8 in the xDrive50i. The Mercedes engines have greater output, but the GLS still accelerates slower than the BMW. As the 2019 X5 offers the exact same engines, we would also expect the X7's fuel economy to be superior to the GLS once its estimates are announced. It should be noted, though, that the GLS offers a high-powered AMG model whereas we anticipate the X7 to offer a plug-in hybrid model comparable to the X5 upcoming xDrive45e model.

The other luxury SUVs diverge in their engine choices and model lineup. The Audi Q7 offers a base turbocharged four-cylinder, as does the Volvo XC90 in its T5 model, which we left out of the above chart entirely for space reasons. That the Q7 3.0 TFSI supercharged V6 gets the same fuel economy estimates as the four-cylinder is proof positive that engine is purely around for its lower base price. Speaking of the Volvo, it's the only one here to have its upgrade engine be a four-cylinder, in this case a turbocharged and supercharged one, as well as offer a plug-in hybrid model that distinctively represents both the performance and fuel economy choice. Win-win!

The only other contender here (for now) to offer a fuel economy choice is the Land Rover with its Td6 diesel engine. Admittedly, it's barely better than the XC90 T6, but a big improvement over the Discovery's standard supercharged V6. That engine actually matches the big boy Navigator's 18 mpg combined, despite that truck's stump-pulling 510 pound-feet of torque and a curb weight that flattens the Discovery by nearly 1,000 pounds. Come to think of it, the Mercedes GLS 450 gets the same 18 as well, which could potentially mean a significant advantage for the X7. To put the passenger space numbers into some kind of perspective, I'm 6-foot-3 and can fit quite comfortably in the third rows of the GLS, Discovery and XC90. I am very squished in the kids-only Q7. I could luxuriate with LeBron James in the Navigator. The X7 should therefore be somewhere in that middle group judging by the specs and the photos (note the squared D pillar and how high the third-row seat is off the floor). In other words, it should deliver the genuine seven-passenger capacity BMW has always lacked.

Cargo space will also be a strong suit, as the X7 has one of the largest cargo holds of any crossover — luxury or otherwise. You'd have to get a Buick Enclave or one of the more utilitarian family haulers to get more. Or just get the Navigator. That thing's enormous and actually gets bigger with that Navigator L that considerably extends the cargo area.

Want to tow with a crossover? Well, this luxury segment is going to be your best bet as all but the four-cylinder-powered contenders offer far more than the Honda Pilots and Subaru Ascents of this world. The Discovery's 8,201-pound capacity is particularly noteworthy as it comes ever-so-close to the mighty Navigator. Of course, which would you really want to tow with? The one with 332 pound-feet of torque or the one with 510?

If you really care about fuel economy, get the XC90 T8 Plug-In Hybrid. When you factor in its price tag, ample interior space and the fact the XC90 still looks just as cool as it did when it debuted, well, it's definitely a compelling family- and eco-friendly luxury hauler.

Take a look at the pictures below and decide for yourself (though after the above XC90 comment, it's probably safe to say where I stand). I was tempted to say BMW is late to the game here, but really, there have never been many luxury SUVs with legitimate room for seven passengers. The GLS has been the biggest luxury thing you could get that wasn't a Navigator-like truck or a Buick Enclave (no slight intended), and judging by the specs, the X7 would seem to be an even-better people hauler. We still need to find out fuel economy, but given the X5, it seems likely to be better than most.

The key takeaways after this first look at the specs and photos: the X7 has the big space it needs to command a premium over the X5, but like the GLS, it sure is expensive. The XC90 T8 Plug-In Hybrid is intriguing. The GLS and Discovery fuel economy disappoint. The Q7 is still an awfully big vehicle for something with so little third-row space. The Navigator sure is different, but it deserves to be in the same conversation as the others.