The new X5 is unnecessarily complex — and we love it

ATLANTA — In the woods outside of Atlanta, we leaned forward in our seat to peer over the nose of a 2019 BMW X5 xDrive40i at a stout German at the bottom of muddy hill. We were waiting for the signal to aim the SUV at him and take our foot off the pedals. This isn't the sort of situation we'd imagine many BMW owners to find themselves in. Who cares though? We were having fun.

At the German's beckoning, we eased the front wheels onto the incline, and took our foot completely off the brake as gravity began to do what it always does. We could feel the various systems firing off the brakes in pulses as the all-season Pirelli tires repeatedly lost and regained grip on the muddy slope below.

Afterward — spoiler alert — there was no human smear on the X5, but the dirt, dust and grass looked out of place on this shiny luxury crossover. Its clean surfaces are accentuated by a few simple, straight lines. Our tester looked imposing standing on its 21-inch wheels, and 22-inchers are available for the first time. The front fascia is more interesting to look at, with the double kidney grille even more visually dominant than before. In back, the lights are slimmer and the exhaust tips are larger and better visually integrated into the bumper.

The interior of the new X5 is a perfect exemplar of BMW's design know-how. We loved the look and feel of the perforated leather seats. The combination of wood and leather on the dash and door panels is a pleasant one, without feely gaudy or gauche. The buttons and controls on the center stack are simple, well placed and kept to a minimum, with the most important ones located on the steering wheel as well. We especially liked the row of buttons numbered 1 through 8, which can be programmed to perform any number of functions, from tuning in to your favorite radio station, navigating to a favorite destination, calling your wife, or putting the car into a specific drive mode configuration. The digital instrument panel and infotainment displays are crisp and clear. The centerpiece of the interior, though, has got to be the optional gear shifter similar to what we saw in the 8 Series, which looks as though it was hewn from clear crystal. Somehow, it didn't come off as too flashy to our eyes. 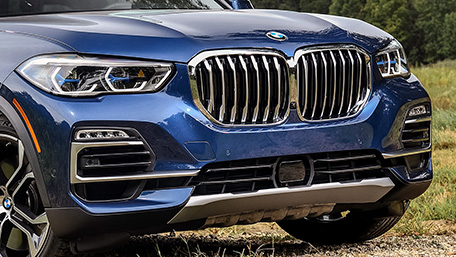 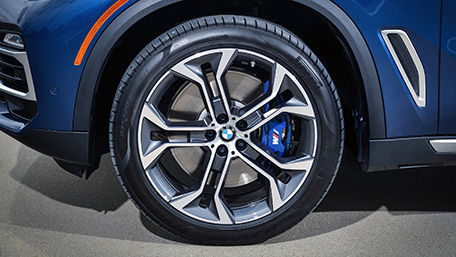 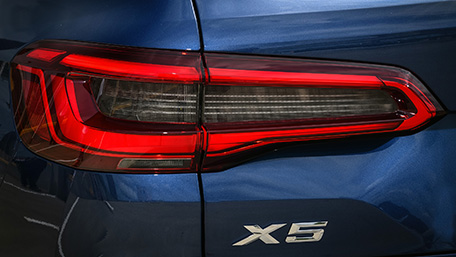 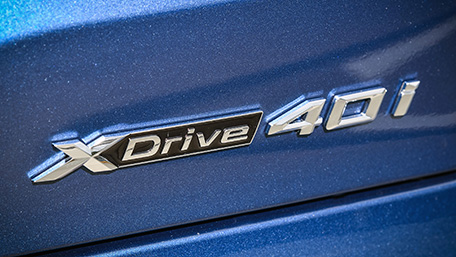 The 2019 X5 is the first vehicle to employ BMW's newest operating system, iDrive 7. We've been critical of iDrive in the past. The old system's menus are manifold, and a pain to navigate. BMW has made improvements over the years, but we're happy to report that this new system finally feels like it really got it right. The large central display can display a lot of information, and is configurable to the put the info you want at the forefront. We found it far easier to find our way through the system, whether we were using the touchscreen or the iDrive control wheel by the gear lever — gesture control still felt awkward, though. We'll be pleased to see this system replace the current-generation of iDrive in other BMWs.

Our tester was equipped with the gigantic color head-up display included in the Premium Package. Our turn-by-turn directions were offered in quadruplicate: on the central display, on the digital instrument cluster, in the HUD, and through the audio system. We couldn't have gotten lost if we tried. 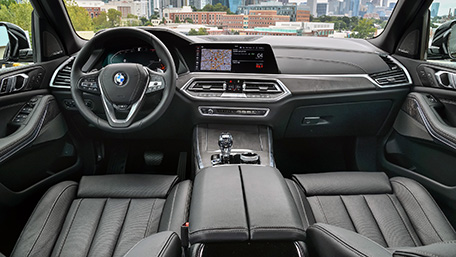 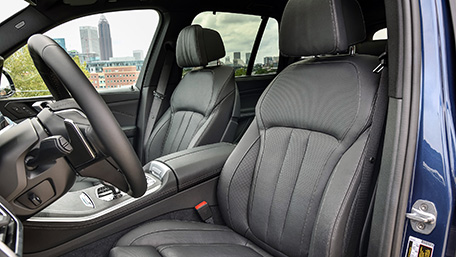 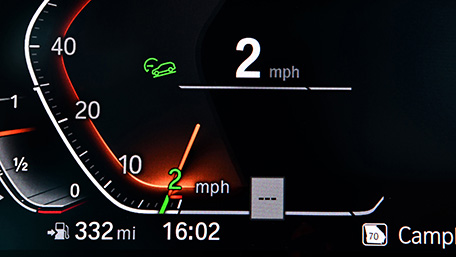 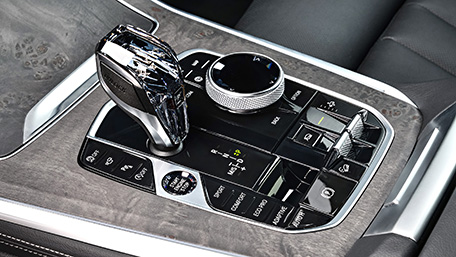 The new X5 offers a number of new or improved technologies, many of which we didn't get the opportunity to use. Its driver assistance suite has the usual stop-and-go adaptive cruise control that makes traffic jams more bearable — as of December of this year, it'll even do the driving for you at speeds of up to 37 mph on a highway, allowing you to take your hands off the wheel as long as the in-cabin camera can see you're watching the road. The car can maneuver itself into perpendicular or parallel parking spots. It has a reversing assistant that remembers the last 164 feet you've driven, and can trace that path in reverse, making it easier to get out of tricky garages. With connected services, you can control certain functions from your smartphone. In a BMW first, you can use your smartphone as a key, and the X5 will adjust settings and preferences for up to five different drivers. There are also concierge services, realtime weather and traffic updates, and a number of vehicle apps that owners may or may not use (do you really want your car to be a smartphone, too?)

Interestingly, the X5 offers heating and cooling cupholders. They seem like a gimmick, but we were completely caught off guard by how cool our room temperature water bottle was after spending 20 minutes in there. It's another example of unnecessary equipment that we were surprised we liked. There'd be more of that to come.

The split tailgate, which now opens and closes completely under electric power, seems a little gimmicky, too, until you actually go to use it. The lower section opens level with the load floor, making it easy to shove stuff in there, and can easily support the weight of a grown man. 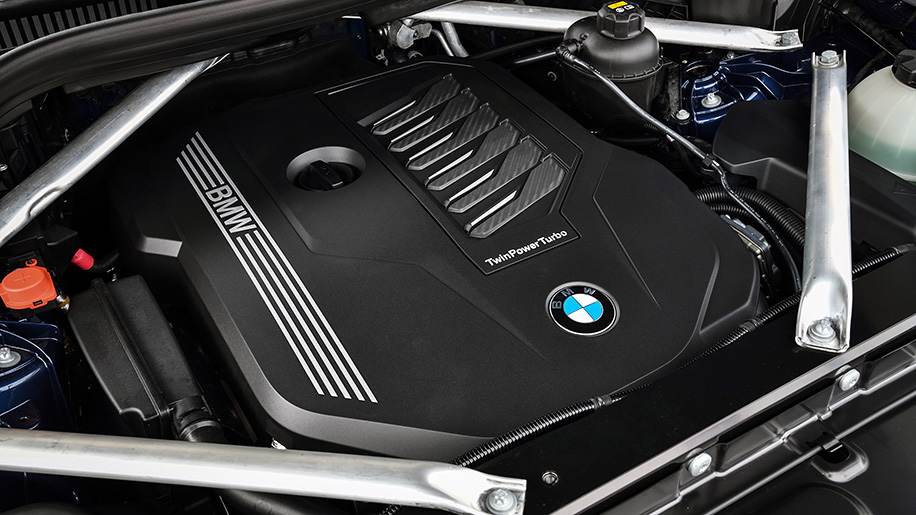 This X5 came with the self-leveling air suspension on both axles as part of the off-road package. It provides an isolated ride on the highway, even with the run-flat tires on it. As we moved onto imperfect roads, the X5 soaked up bumps, vibrations, and noise. It also managed body roll well, which made for a comfortable ride even as the roads got twisty. It'll even adjust the suspension based on the amount of fuel in the tank, which seems highly specific and perhaps unnecessarily complex.

We had the chance to do some off-roading in the X5 — an activity that seemed completely unnecessary — in what appeared to be the middle of nowhere, an hour outside of Atlanta. While tailgating on someone's lawn is about how far off-road most X5s will go, BMW was eager to prove the X5's prowess. So the trail we took was no joke. Sharp, off-camber turns, deep ruts, lots of large, exposed roots, steep hills and plenty of mud were all on the menu. With the off-road mode set for rocks, which raises the ride height to its maximum, we followed the lead vehicle into the woods.

Still wearing the same set of Pirelli P Zero run flats, it climbed uphill in slippery mud, even though on these tires we thought there was no way in hell we were getting to the top. Add in some throttle, and if there was traction to be found, the X5 found it and scrambled upward. When we were staring at the tree canopy and the trail disappeared from view, we used the forward and 360-degree surround cameras to re-orient ourselves. 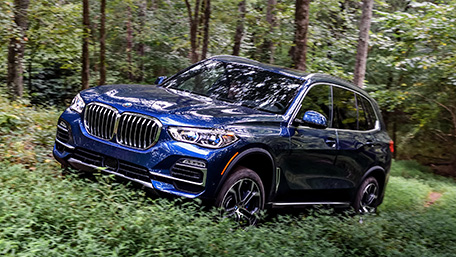 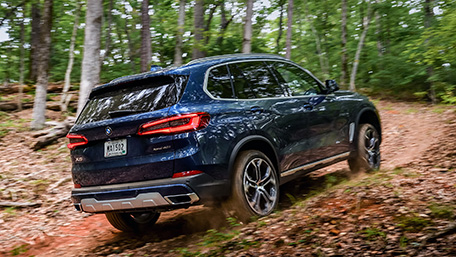 Which brings us back to the stout German — remember him? With hill descent control on, the X5 crept down the steepest, muddiest slopes inches at a time. We were impressed that it did the deed on these tires. Perhaps even more staggering than the fact that we didn't flatten this German dude was just how comfortable we were throughout the entire ordeal. The X5's suspension did its damnedest to keep us level as possible, and it worked well. While the chassis was making all sorts of limber maneuvers, far less motion made its way into the cabin. We turned on the ventilated seats, sipped our chilled water, and relaxed. All these complex features were really starting to grow on us.

With dirt and vegetation still clinging to the X5, we headed back out for a longer drive through the paved roads of the Georgian countryside. With more time to use the vehicle in a more realistic way with regard to BMW customers' lives, that interior experience came to the forefront again. Even after hours in the front seats, we weren't wiggling in our seats and removing items from our pockets to stay comfortable. It was quiet, too. It took some genuine heavy-footing in order to hear the inline-6 working underhood.

There is very little to actually gripe about in the new X5, but our sole major complaint is a near dealbreaker. This crossover is a pain in the ass to steer. There's an absence of steering feel that makes it really hard to place this car in a lane, especially as lanes get narrower and the pavement curvier, as they did on our trek back into Altanta. We had to make constant adjustments, but those adjustments required even further adjustment as we tried to aim the X5 a little more into the corner, or to offset earlier overcompensation. Thankfully, this thing has lane keeping assist, right? 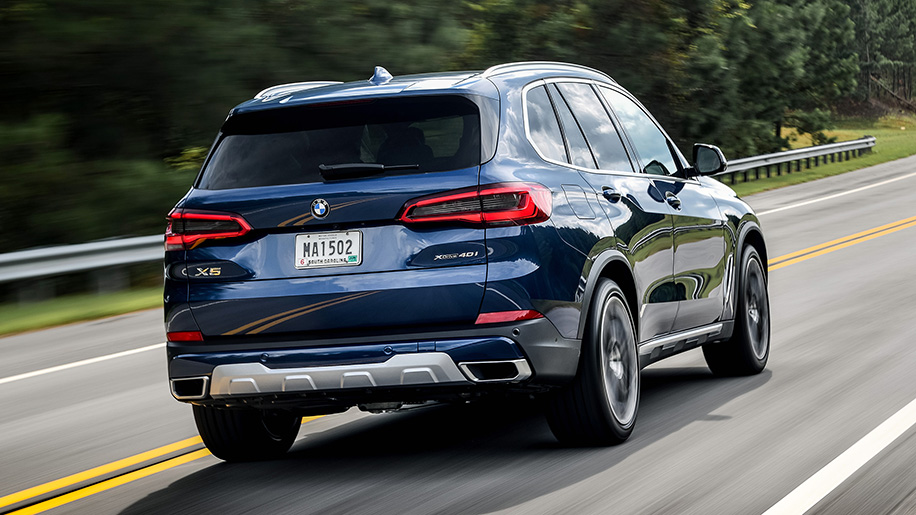 But the lane minder was triggered far too often, giving the X5 a hard nudge back toward the center. Even with the turn signal stalk held to signal a lane change, we found ourselves wrestling with the steering wheel as it tried to guide us back into our starting lane. Generally, we like the added safety that comes with driver assistance systems. In this case, it was a burden.

The X5 starts at $61,695 for the xDrive40i, and goes up quickly from there. Our tester, with its Convenience, Driving Assistance Plus, Luxury Seating, Off-Road, Premium and Executive packages added another $20,000 or so to that. The Audi Q7 and Mercedes-Benz GLE cost less, and start even lower if you don't need all-wheel drive. With the extra price of the BMW, though, you get a lot of useful (if unneeded) technology and thoughtful, unique interior design. It's a hot segment, so it's hard to go wrong in terms of quality and capability. Styling is a major differentiator here, and we won't fault you your personal preferences either way. If you need off-road capability, though, the X5 is a standout.

Steering gripes aside, there's a lot to love about the new X5. We appreciate the effort BMW took in refining this car and providing a multitude of technologies that, even if they seem gratuitous, we ended up enjoying. After all, this is a luxury vehicle, and the X5's multitude of extra goodies define it as such. While we never knew we wanted cooled cupholders, or a reversing assistant, or four ways to get turn-by-turn directions, or even to go off-road in a luxury crossover like this, it was nice to have it all for a day. Many customers will come to the X5 for its space, performance and looks. All the rest is the icing. 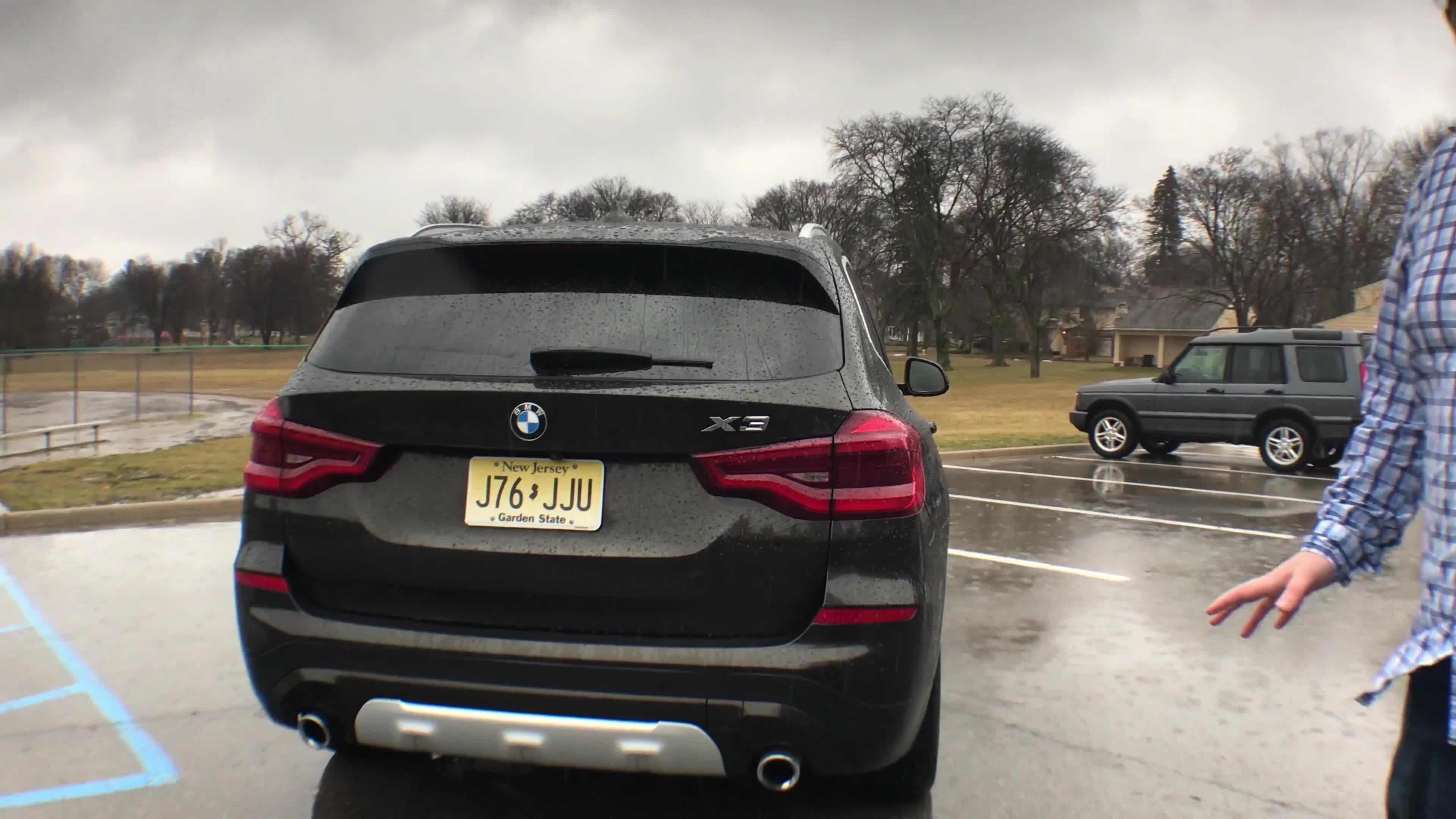