Opulent, Effortless, And Too Good For Children View All Specs
One morning, I'm driving down the Malibu coast, top-down in a two-seat sports car. Twelve hours later, I'm on a straight road, in traffic, and piloting a seven-seat SUV. I think this is how new parents feel.

There's no other word but "parental" to describe how three-row crossovers, like this 2017 Audi Q7, make me feel. Whether it was the Honda Pilot that was actually kind of tossable, or the plush Kia Sorento, one glance in the rear-view mirror at five headrests makes you wonder if someone isn't waiting for you outside an elementary school.

The Q7, however, has always been a luxury car first. And this second-generation model is crammed with technology and convenience features to make life more effortless, as if it was designed for a person who lives in Bel Air but also must take the kids to horse-riding lessons on the one weekend it rains in Southern California. Autoblog already tested a European example, but I'm now getting the chance to finally drive it Stateside.

When it comes to the Q7's appearance, I always seem to have a minority opinion. The old one looked like a bus when plenty of people said it looked beautiful. This new one has been widely criticized for looking like a wagon, but I don't see a lot wrong here. At some angles, it's reminiscent of the old 5000 Avants from the '80s – probably not a coincidence, since the Q7 is Audi's most prestigious wagon right now. Even Audi admits it pulled from the '80s with styling cues along the rear quarter panels and the ever-larger "Quattro" badges. While the shape grows on you, it isn't going to stop people seeing it and thinking it's a Q5. 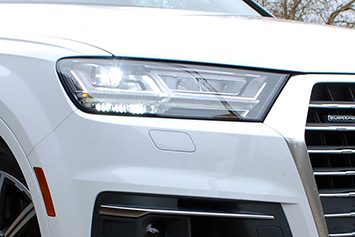 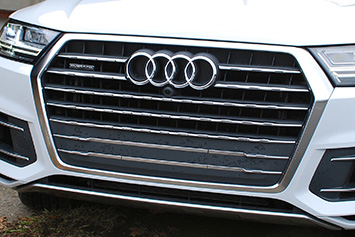 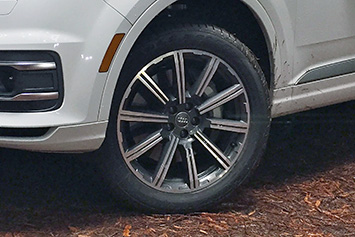 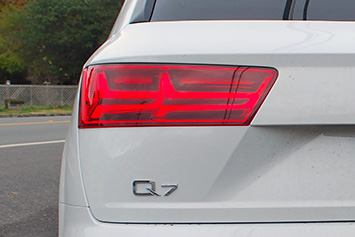 The new Audi Q7 has an incredible sense of elegance about it.

The most ambitious design touches are the arrows in the LED lights, front and rear, but they're ultimately dwarfed by the size of the car. What's more, the string of white, silver, and gray cars on hand at our test aren't exactly striking, and the optional 20-inch wheels are boring in design. You could also call this "quiet luxury." Or perhaps stately.

The new Audi Q7 has an incredible sense of elegance about it, never feeling ponderous like a truck and always feeling secure like a large luxury sedan. As the first application of the Volkswagen Group's MLB Evo platform, it really is a large luxury wagon. Which is the exact image the company seems to be running from. No matter, because the Q7 is exactly the type of vehicle you can put your family in and still look elegant coming out of, never mind the muddy paw prints.

Audi's engineers toned and strengthened the Q7 over the outgoing model, as if they were trying to turn a rugby player into an Olympic diver. The math adds up, even if the original claim of a 700-pound weight reduction has dwindled to 474 pounds in US specification. Nevertheless, you're always confident in the Q7's security. Only on the most aggressively curvy roads does it feel large. 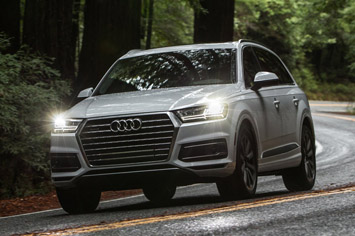 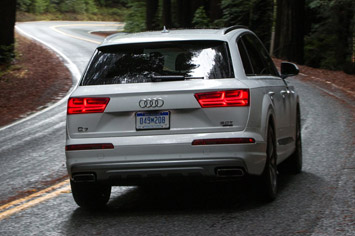 The steering is sharp, but keeping the drive mode set to Dynamic stops the Q7 from feeling overly buoyant on small roads.

Even with the $4,000 optional air suspension and four-wheel steering, the Q7 continues to telegraph its size. It's immensely capable and can be surprisingly communicative when in its most sporting drive mode setting, but it never feels smaller than an A8. At least the four-wheel steering is helpful in parking lot situations, where an SUV this big can be a hassle. The steering is sharp, but keeping the drive mode set to Dynamic stops the Q7 from feeling overly buoyant on small roads. The vast majority of Q7s will be sold with the steel spring setup, however, and that's refined enough.

For now, the 3.0-liter supercharged V6 with 333 horsepower and 325 pound-feet of torque is the only available engine, mated to all-wheel drive and good for 19 miles per gallon city, 25 highway. Later in 2016, a 2.0-liter turbo will serve as the price leader and apparently eke out a few more mpgs. The E-Tron is coming, though timing is unknown. And the 3.0-liter TDI is still TBA. All of those options may not matter because the supercharged V6 is a hearty engine. Power is effortless and immediate, and it's all very confidence-inspiring.

As expected, the interior of this big Audi is a quality place. And as expected, it's far too nice for children with their jam hands. Everything is a quality furnishing, ripped straight out of a Restoration Hardware catalog. And anyone who's been in a recent big Audi will immediately feel at home and pampered. From the front seats, the low dashboard and tall windows provide a great view out, recalling the original Range Rover. 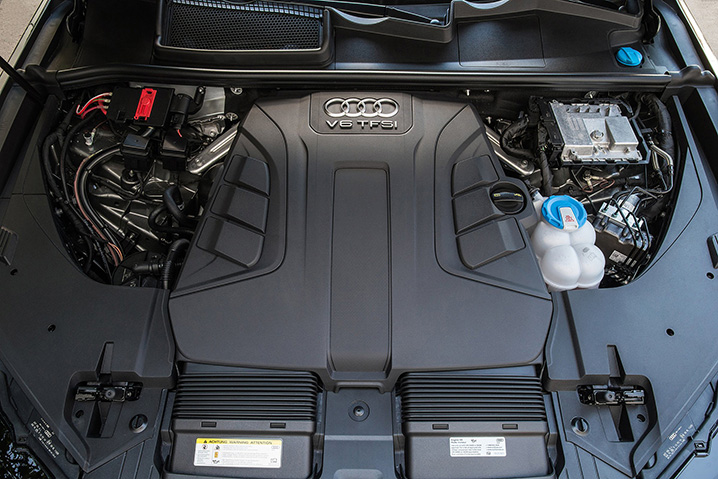 Navigation and radio information are right in front of you, and beautifully rendered.

Previously seen on the Audi TT, the Virtual Cockpit infotainment screen is the centerpiece of the Q7's interior, even though it sits in front of the driver. It's part of a $2,000 Vision Package that bundles other usefulness such as LED headlamps and a surround-view camera system, so it's well worth the price. What looks to be a lavish gadget in the brochure actually makes driving easier in practice. By being able to hide the center screen, there's one fewer shiny object to be distracted by. Navigation and radio information are right in front of you, and beautifully rendered. What looks like a gimmick is actually my favorite part of the interior.

It's also worthwhile to pony up $2,400 for the Driver Assistance pack because of the slick adaptive cruise control. Not only does it smoothly lower your speed when coming up behind another car, but it uses the traffic-sign recognition to automatically slow you down when speed limits abruptly change. Anyone who attracts speeding tickets should check this option. The system also elegantly detects curves ahead and slows you down – helpful on a long, coastal California drive.

Too bad you have to get very familiar with the MMI controller to find out how to adjust some of these systems. And while the tech in the Q7 generally works well, the level of personalization (hundreds of ways to change the interior lighting!) is overwhelming at times. It all makes sense in the end, but you wonder how much easier things would be if you had less choice. 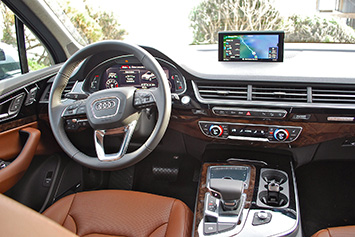 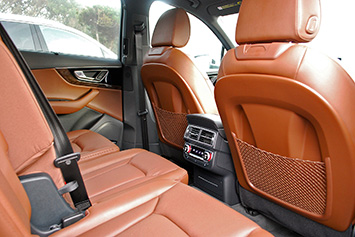 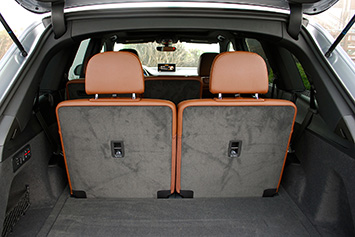 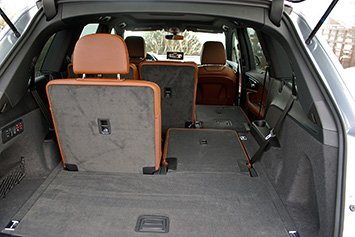 The Audi is luxurious, indulgent, and imposing, never mind that your kids will outgrow the third-row seats before they hit puberty.

Audi says the Q7 competes with everything from the Infiniti QX60 to the Mercedes-Benz GLE (though, weirdly, not the seven-seat 2017 GLS-Class), but the true arch rival has to be the new Volvo XC90. Both come to the US with seven seats and all-wheel drive only, and both are massive by European standards. For comparison, the Volvo's second-row seats slide forward with one motion so your kids can get themselves into the third row, rather than the two-step move in the Audi. The Q7 may have five LATCH connectors, but that alone doesn't make it the family hauler that the Volvo plainly is.

A modestly equipped Q7 3.0 TFSI Premium Plus costs roughly $68,000, a hefty $13,000 over the $54,800 base price, and roughly $2,500 more than a similarly specced Volvo XC90. But then most of the XC90s sold here are more modestly equipped at around $55,000 and doing battle with the Acura MDX – the biggest seller among luxury three-row crossovers. At this time, the Volvo lacks a power-folding third row (a dubious feature, in my book) and power adjustment for the steering column (one of God's greatest gifts). Sure, the Audi is a Silicon Valley tech developer's dream inside, but the Volvo comes off as more inviting and approachable and still looks great when the dog thinks the gear lever is a delicious chew toy.

None of that will matter to the fashionable parents the Q7 has attracted over the years. The Audi is luxurious, indulgent, and imposing, never mind that your kids will outgrow the third-row seats before they hit puberty. Spend an eight-hour day in the Q7, and the Audi won't shout its capabilities at you. But you'll get out, stretch your limbs, and feel like you could do another eight hours. It's effortless. Just like a luxury car should be.