2020 Hyundai Palisade vs. Ascent, Pilot, Highlander and CX-9: How they compare on paper

Autoblog Staff
We've finally had our first drive of the 2020 Hyundai Palisade and found it to be well-equipped for sales success. It nails the formula that some of the most successful three-row crossovers have, the aforementioned seating capacity, high driving position, all-wheel-drive availability and a V6 engine. Of course, it also offers a unique and menacing-looking exterior that ought to stand out in the parking lot.

To dig deeper into how it compares to other three-row family crossovers, we've fired up the old Autoblog Comparo Generator 3000 (™) and lined the all-new 2020 Palisade up against the 2019 Subaru Ascent, 2019 Honda Pilot, 2019 Toyota Highlander and 2019 Mazda CX-9. Besides being two of last year's best-selling three-row SUVs, the Pilot and Highlander are also the closest in general concept to the new Palisade, while the Ascent and CX-9 also offer a comparable turbocharged four-cylinder powertrain. The CX-9 is also one of our favorites in the segment, and the Ascent is one of the newest entrants on the scene.

There are of course numerous other worthy contenders, including the Chevrolet Traverse, GMC Acadia, Volkswagen Atlas, Nissan Pathfinder, Hyundai Santa Fe and the best-selling Ford Explorer, so if you want to see their specs, check out the Autoblog compare tool. 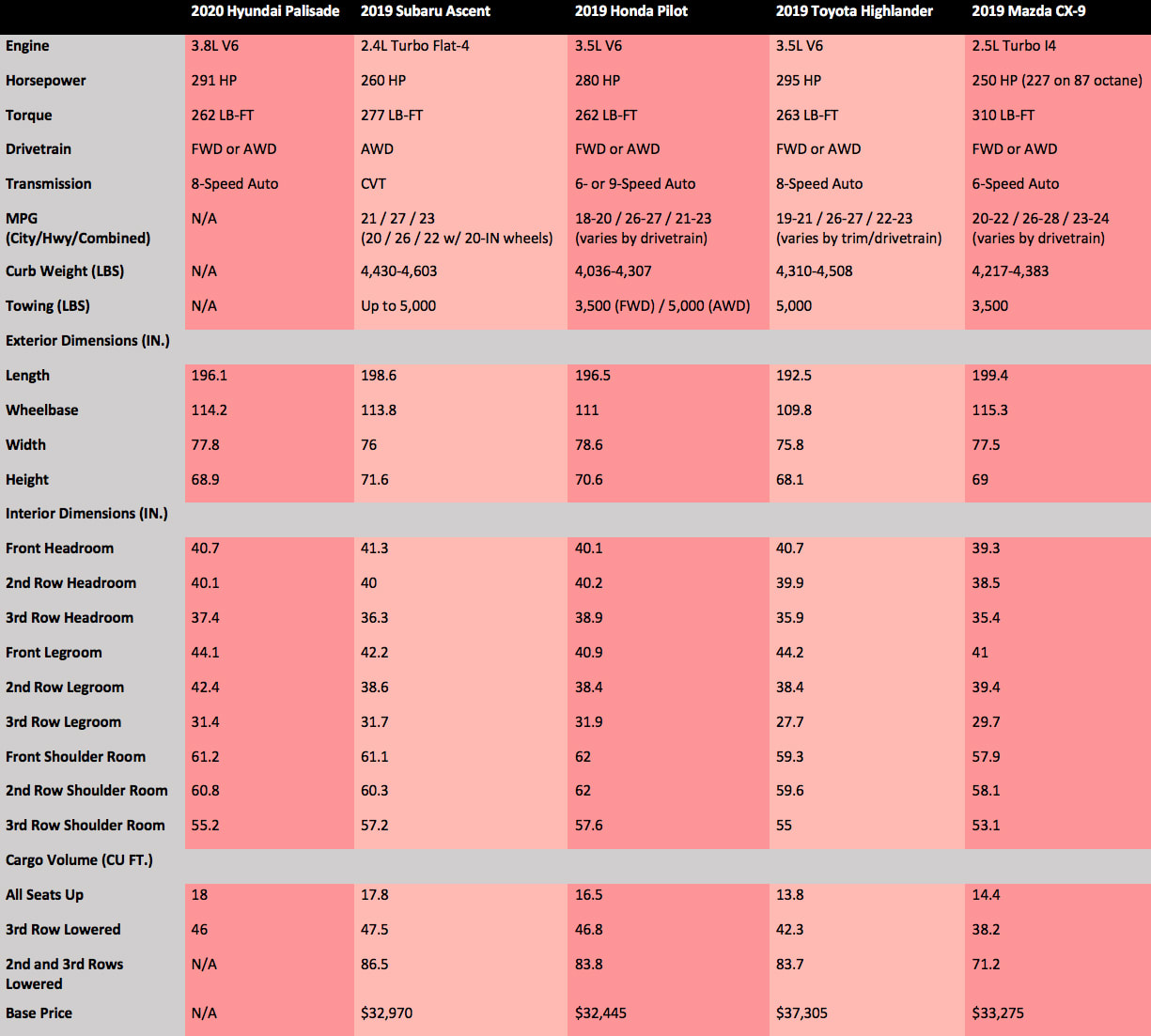 The Subaru, as is so often the case, is the oddball. It has a 2.4-liter turbocharged horizontally opposed four-cylinder (aka a flat-four or a boxer-four) that produces a comparatively modest horsepower rating, but a greater amount of torque. That's typical for turbocharged engines such as Mazda CX-9's turbo inline-four that produces 250 horsepower on premium fuel (227 hp on 87 octane) and 310 lb-ft of torque (the VW Atlas also offers a base turbo-four). The Hyundai, Honda and Toyota, meanwhile, go about it the old-fashioned way, with naturally aspirated V6 engines displacing 3.8 liters in the Hyundai, and 3.5 liters with the two Japanese crossovers. The Toyota and Hyundai lead the pack in horsepower, with the Toyota taking top honors by just 4 horses. The Honda weighs less, though, so their acceleration should be comparable. The Subaru actually accelerates on par with its V6-powered competitors, probably due in part to its continuously variable transmission.

The fuel economy trophy goes to the Ascent. Despite coming standard with all-wheel drive, it gets 23 mpg combined — matching most front-wheel-drive Highlander trims and the nine-speed front-wheel-drive Pilot Touring and Elite trims. Other drivetrain variations aren't much different at 21 or 22 mpg combined. And yes, the CX-9 is technically tops, but its best numbers come with front-wheel drive. With all-wheel drive, it's lower than the Subaru, though just barely. Hyundai hasn't yet announced fuel economy for the Palisade, but expect it to fall somewhere in the range of these competitors.

This is literally the big issue when it comes to family-friendly SUVs, especially this group that caters to more functionality-minded buyers. In short, the new Ascent overall is biggest on the inside, but the Hyundai Palisade isn't far behind in some areas.

The differences are closer in terms of passenger space, with the Palisade, Ascent and Pilot very close in headroom, shoulder room and third-row legroom. The Palisade takes the lead overall, though with the most front and second-row legroom. The CX-9 is somewhere in the middle, but despite what the numbers say, it's more radically sloped roofline can make things a bit claustrophobic in the third row. These five family crossovers obviously have differences, but as you can see, they're awfully similar, and clearly all these manufacturers are watching each other closely. There is one last key aspect to look at, and that's price. Everyone is very close in pricing around the $33,000 mark, with the Pilot pulling off a slight advantage. The Highlander, in the most common V6 guise, is surprisingly expensive at a few thousand more than the next expensive Mazda CX-9. Given these similarities, any of these vehicles should be a strong choice, and thus are worth closer examination by the buyer. 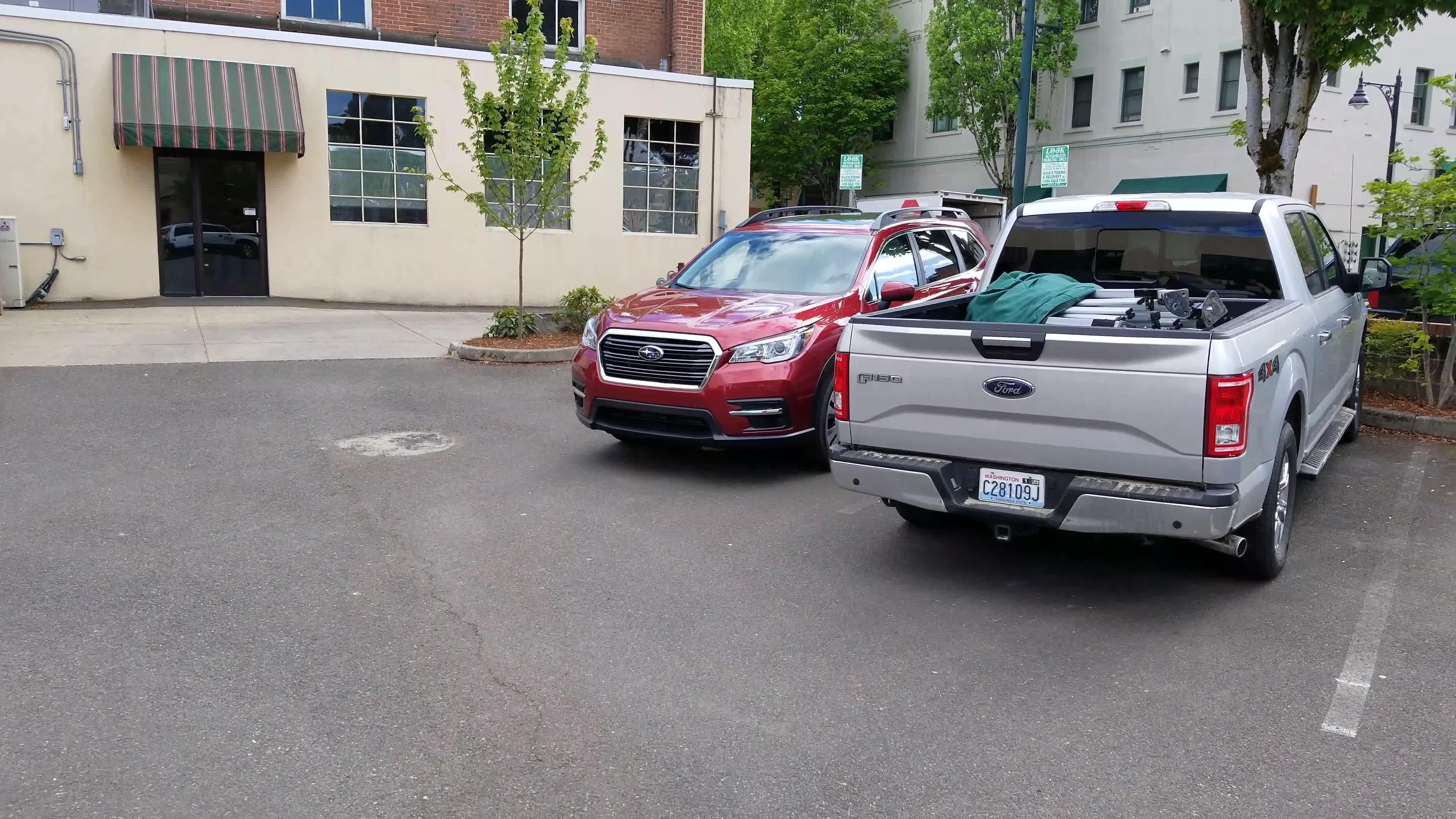 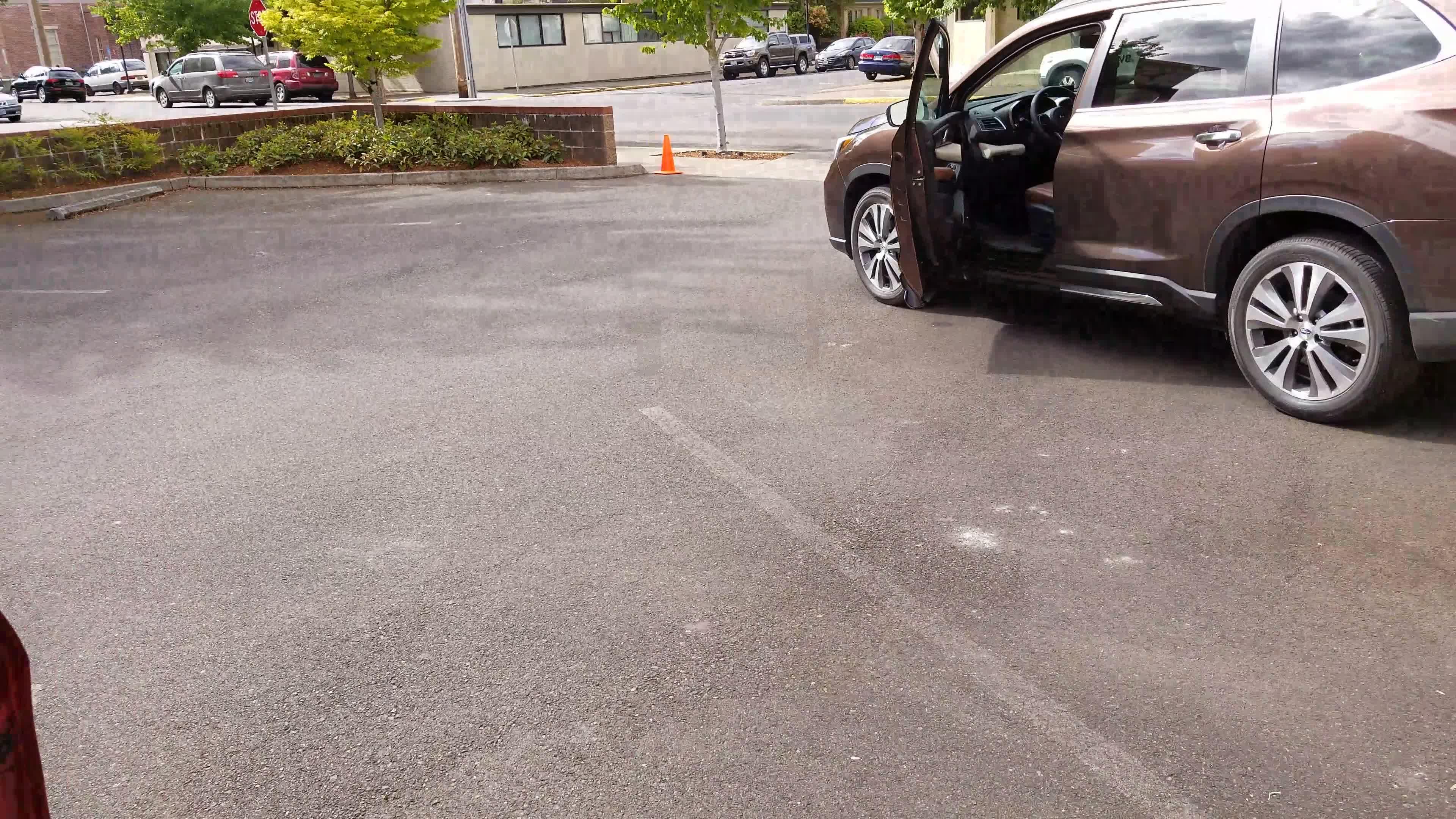