From CR-V and Cherokee, to RAV4 and Rogue, they're all here.

James Riswick
Honda CR-V vs Toyota RAV4. Chevy Equinox vs Ford Escape. Mazda CX-5 vs Subaru Forester. Whichever combinations of compact crossover SUV you're considering, there's probably a comparison test or chart out there to read. Heck, you can even create a three-car comparison yourself here at Autoblog.

However, if you want a bunch of that information all in one convenient place, well, here it is. Our mega comparison of specs, features and photos of compact SUV entries from every mainstream manufacturer that sells them. That includes the 2018 Chevrolet Equinox, 2018 Ford Escape, 2018 GMC Terrain, 2018 Honda CR-V, 2018 Hyundai Tucson, 2019 Jeep Cherokee (it's already on sale with notable changes from 2018), 2018 Jeep Compass, 2018 Kia Sportage, 2018 Mazda CX-5, 2018 Mitsubishi Eclipse Cross (none of Mitsu's SUVs are perfect fits for this segment, so we deemed the MEC the most competitive fit), 2018 Nissan Rogue, 2018 Subaru Forester, 2018 Toyota RAV4 and 2018 Volkswagen Tiguan. We can update this comparison as more information about 2019 models is released, most notably the Forester and RAV4.

Now, there are certainly some models that are smaller (Nissan Rogue Sport) or larger (Kia Sorento) that could also be considered, but we figured it was wise to stick with those in this sweet spot of comparable size and price. We also included links to Autoblog reviews, buying guides and smaller comparisons. 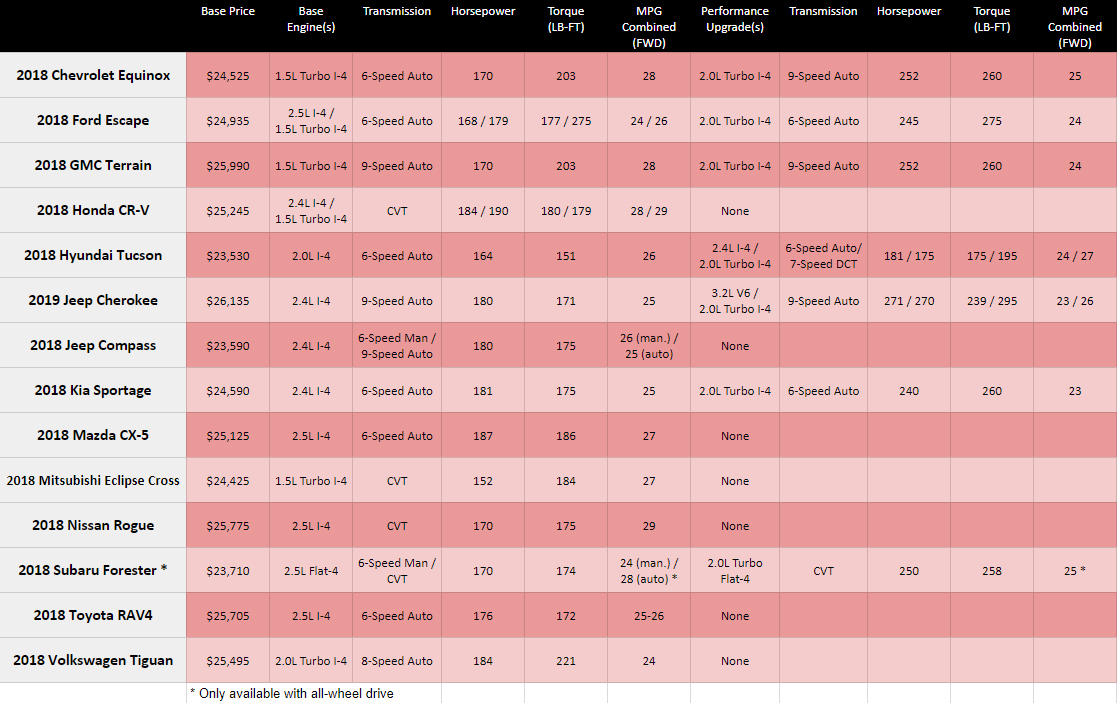 
With rare exception, this segment features four-cylinder power. Sometimes it's turbocharged, often its not, but standard engine outputs are generally in the same ballpark. Therefore, we'd recommend focusing on torque output, as it's what will make a difference around town or when passing, and weighing that versus fuel economy (the Chevy Equinox, GMC Terrain, Honda CR-V and Mazda CX-5 make particularly strong cases in this regard). Many drivers aren't too fond of continuously variable transmissions (CVT), either, so that's another thing to consider and note during a test drive.

As you can see, several models are available with performance upgrades. Besides the Jeep Cherokee's available V6, all are more powerful turbocharged four-cylinder engines. The exception to this would be the Honda CR-V and Ford Escape, as their 1.5-liter turbo engines don't prioritize performance. Instead, they serve as overall upgrades to the base naturally aspirated engines standard on only their base trim levels (CR-V LX and Escape S). Since the volume-selling CR-V EX and Escape SE come with those 1.5-liter turbos, we've listed those as "base engines" for the sake of more realistic comparison.

It's also important to note that several choices are available with fuel economy upgrades. This includes the diesel-powered Chevrolet Equinox and GMC Terrain, as well as the Nissan Rogue and Toyota RAV4 hybrids. 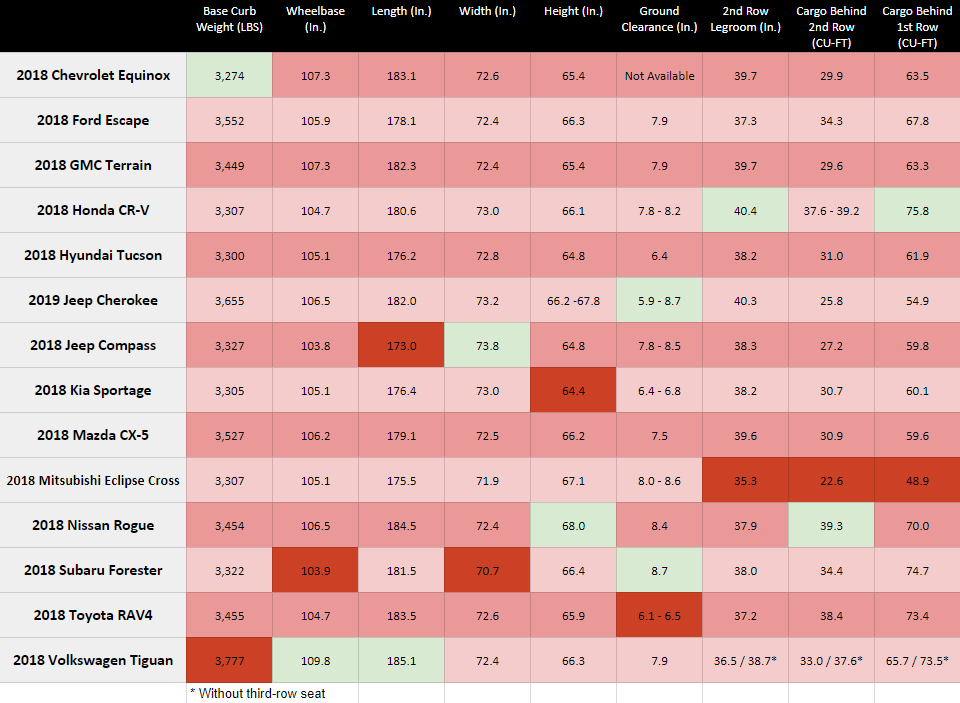 
There were a lot more dimensions we could've included, but there's only so much room, so these are the measurements that make a difference in terms of whether you, your passengers and your child's car seat will fit inside. Whether all your stuff will fit in the cargo area. Whether the compact SUV be too tall, wide or tall for your garage. Whether it will be damaged should you take it lightly off-roading. And whether a hefty curb weight may negate whatever power advantage it might seem to have.

We've gone ahead and highlighted the best (green) and worst (red) in each category, though it's still important to try things out for yourself. That's a reason we left out front legroom: seat adjustments, differing body types, and options like power seats can make measurements misleading. You may or may not fit well regardless of what the specs say. It's also important to note that cargo measurements can be deceptive at times, so don't be shy about bringing along stuff to try out during a test drive. That includes strollers, golf bags or your dog. Seriously, do this. You're spending tens of thousands of dollars, do you really want to do so and find out your Golden Retriever doesn't fit?

Photos and Links to Autoblog Reviews Read our Hyundai Tucson review and see what's changing for 2019 Read our Kia Sportage Review and see what's changing for 2019