For most of us, September 2009 doesn't seem like that long ago. We had the same president, carried Apple iPhones, and were even paying roughly the same amount for a gallon of gas. For Hyundai, though, this particular month was when everything began to change, thanks to the introduction of "fluidic sculpture" and the second-generation Tucson.

The swoopy, handsome styling introduced on the Tucson infiltrated the rest of the brand's offerings, starting with the Sonata sedan and filtering through. In the process, Hyundai raised its flag not as a manufacturer of ultra-affordable utilitarian transport, but as a company that builds fashionable, well-equipped, and high-quality cars.

While it's no secret Hyundai is in a better place than it was nearly six years ago, the importance of the Tucson has grown substantially. Much as the second-gen model helped to signal Hyundai's arrival as a global player, the company hopes the third generation will mark its entry as one of the industry's premier crossover builders. Based on a day of driving around some of Minnesota's 10,000 lakes, we think that's an attainable goal. 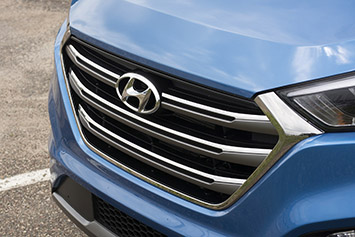 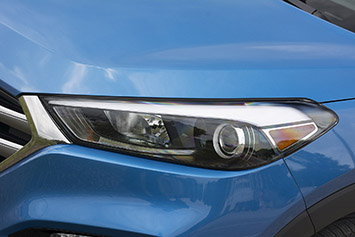 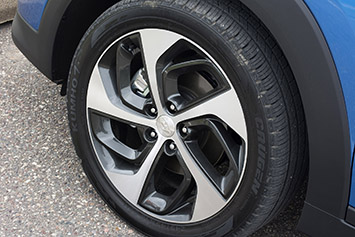 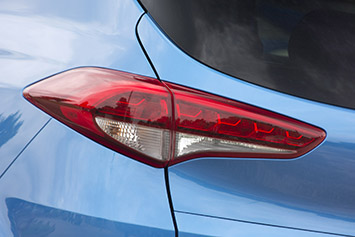 According to Hyundai's research, the Tucson is viewed as "sporty, stylish, and modern." Targeting that first notion is the new 1.6-liter, turbocharged Gamma four-cylinder, which sits under the hood of Eco, Sport, and Limited models. The single-scroll turbo allows the tiny four to deliver 175 horsepower and 195 pound-feet of torque. There's also a 2.0-liter, naturally aspirated four-cylinder for the base SE, with 164 hp and 151 lb-ft of torque, although we weren't able to score any time behind the wheel. Look for more on the base Tucson in the near future. The turbo, though, is shockingly quiet at idle, and isn't too bad as it climbs the tachometer. North of 6,000 rpm, though, it's loud, buzzy, and unpleasant.

Even with the turbo's peak twist available from 1,500 to 4,500 rpm, there's little hiding the maximum curb weight of 3,710. After a smidge of lag, initial torque comes on strong, although the weight of this compact crossover soon overwhelms what power is available. That'd be a problem were it not for the new seven-speed, dual-clutch transmission. Paired exclusively with the 1.6-liter turbo (the 2.0-liter gets a traditional six-speed auto), the dry-clutch gearbox is able to deliver smooth but quick changes, particularly at engine speeds below 5,000 rpm. Shift speeds seemed to fall off north of there, especially when running up to the 7,000-rpm redline and at wide-open throttle. Downshifts don't feel quite as quick as upshifts, but there's very little hunting for gears.

During our testing, we drove a front-wheel-drive Sport trim and an all-wheel-drive Limited model. The front-driver has a tendency to torque steer at low speeds, like those encountered when taking a 90-degree turn after a stop sign, which is why we'd push for the Magna-sourced all-wheel drive and its accompanying torque-vectoring system. Capable of shunting torque to the wheel with the most grip, the system proved sure-footed on our drive route, even when tackling a lengthy section of very loose gravel and dirt at speed. Through the turns, we were able to feel the system at work, shifting torque as needed. There's also a lock mode that forces a perfect 50-50 split between front and rear. 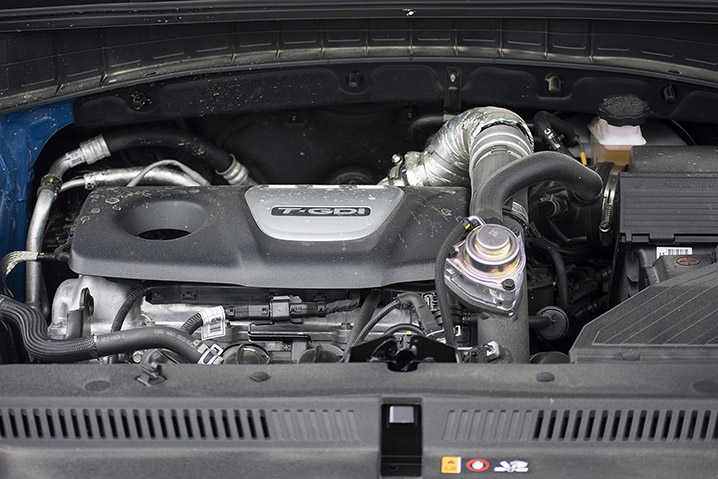 Hyundai did quite a job with the Tucson's new suspension, fitting a multi-link rear suspension across the board (last year's front-drive model had a single-link rear) and adding larger shocks and struts, sourced from Germany's Sachs. The actual structure of the car has also been significantly updated, with 51 percent of the body hewn from advanced high-strength steel, making for a 48-percent bump in rigidity. The result of these efforts is a far more refined, comfortable crossover.

The Tucson impressed on our mixed driving route with the way it managed all manner of bumps and imperfections. The suspension has no issue preventing potholes and other big impacts from interfering with the experience in the cabin. Impact noises are muted and very little of the force gets through to the driver or passengers. The ride is stable over smaller, high frequency ripples and bumps, too. Simply put, not only is the new Tucson is smoother and more poised than its predecessor, but most of the vehicles in this segment today.

The handling profile isn't quite as shining, sitting somewhere between the segment-leading CX-5 and a mid-grade performer like the Honda CR-V or Ford Escape. Roll is progressive, and there is more dive under braking than we'd have liked, although the Tucson feels pinned down over crests and undulating roads. Feedback through the chassis is limited, but the only vehicle in this class that really excels in that regard is the CX-5, so its absence here isn't surprising. 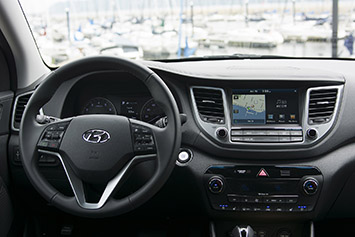 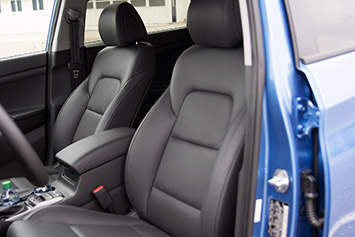 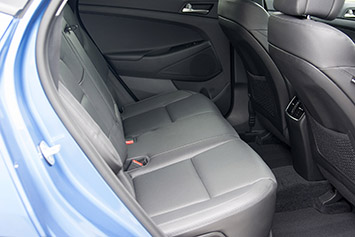 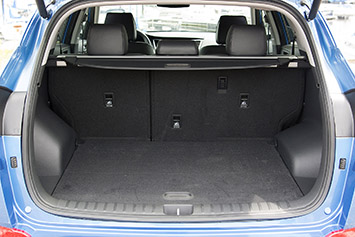 Style, the second step of Hyundai's brief for the Tucson, is naturally a more subjective realm. While the matured styling of Fluidic Sculpture 2.0 has led to a more conservative Sonata, we think it translates better to Hyundai's smallest crossover. That's partially because the Tucson has grown in all the right places,to better accommodate the broad, hexagonal grille, expressive headlights, squat greenhouse, and Sonata-esque taillights. The wheelbase is up 1.2 inches, while the overall vehicle is three inches longer, 1.1 inches wider, and 0.4 inches lower. That means it's shorter, wider, and lower than the competitors like the CR-V, Escape, and Toyota RAV4, although its wheelbase is longer than everything but the Ford. For Hyundai, that means there's slightly more passenger volume than the competition – 102.2 cubic feet compared to 98.1 in the Ford, 101.9 in the Toyota, 101.5 in the Honda – but it's down rather significantly on cargo volume.

Despite its family pretenses, the Tucson's interior isn't a bad place for the driver. The seats – cloth on everything but the Limited trim – are tightly bolstered for a crossover, although we doubt even the bigger boned among us will find them uncomfortable. The bottom cushion is soft enough, too. The optional leather is nothing to write home about, although Hyundai's decision to fit higher-quality leather on the small-diameter steering wheel (again, relative to CUVs) is inspired. This is a really nice touch point, and feels better suited to a performance offering, like the Genesis Coupe or Veloster Turbo than a compact crossover. That said, wheel-mounted paddle shifters are conspicuous by their absence, even on the Sport trim. It's a strange omission, particularly considering the DCT.

The Tucson also feels quite modern. Here we use that to mean technology, which this CUV offers in spades. LED headlights, ventilated front seats, heated rear seats, blind-spot monitoring with cross-traffic alert, a massive panoramic sunroof, and a choice of either five- or eight-inch touchscreens can all be had on at least one of the Tucson's four trims. There's even an awesomely smart, hands-free liftgate.

Those options won't come cheap, though. You can check out our full story on the Tucson's pricing breakdown here. As for our two testers, our front-drive Sport added a $125 set of floormats, bringing the as-tested price to $27,170. Our all-wheel-drive Limited, meanwhile, is as loaded as we could get it, thanks to the $2,750 Ultimate Package (HID headlights with active front lighting, lane departure warning, automatic emergency braking, that huge panoramic sunroof, a 4.2-inch instrument cluster display, ventilated front seats, and heated rear seats). Adding the same set of floor mats and a $190 cargo cover brought the as-tested price to $35,260.

While that price might seem extreme, it's not as excessive as some competitors. A 1.6-liter, all-wheel-drive Ford Escape Titanium, for example, starts at $31,890 before any options, although matching its equipment list with our Tucson Limited makes for roughly even pricing. The Honda CR-V Touring AWD is also substantially more than the top-end Tucson, starting at $33,775, although that price can't be bumped up by options, so Honda drivers come out a smidge ahead of our fully loaded Hyundai.

The long-in-the-tooth second-generation Tucson was an also-ran in the compact crossover race (Hyundai only sold around 47,000 examples in 2014, to the Escape's 306,000 and the CR-V's 335,000). The third-generation model changes that – it's a standout entry that does all the stuff a crossover should, while presenting a handsome face, an entertaining powertrain, and the kind of tech consumers demand. If Hyundai wants to establish itself as a crossover brand, there are few better ways to do it than with a vehicle like the 2016 Tucson.