The competition might still have the edge on VW.

The Volkswagen PR team euphemistically says it has been "fairly underrepresented" in the SUV market. That's perhaps an understatement: thanks to the crossover boom and falling sedan sales, VW's US deliveries are down some 25 percent from 2012 to 2016, the decline beginning even before the diesel scandal.

But a pair of new VW SUVs have arrived, and both are a significant improvement over the previous offerings from Wolfsburg. We drove the Atlas full-size SUV earlier this year and came away with mixed feelings – and so it is again with the redesigned 2018 Tiguan.

Pricing starts at $26,245 for the FWD S Tiguan, with the price rising quickly across four trim levels to the $38,450 AWD SEL Premium. Much like with the larger Atlas, the Tiguan starts out decently equipped for the price. But the top-of-the-line version that we tested ends up a bit less compelling.

It's built on Wolfsburg's Modular Transverse Matrix (MQB) platform first seen on the Mk. 7 Golf and then on the Atlas SUV. 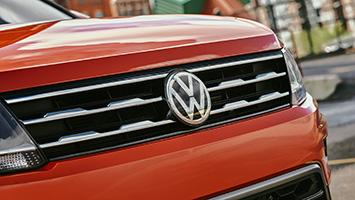 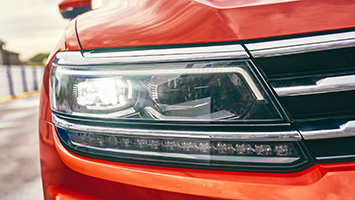 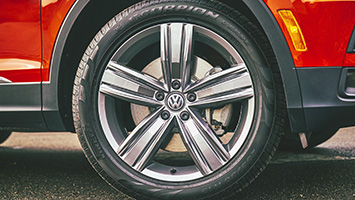 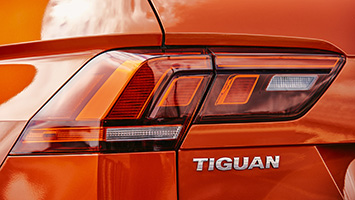 The Tiguan's designers didn't stray far from the clean lines and IKEA-esque styling that have been a Volkswagen signature for more than a decade. LED taillights are standard, with distinctive LED front lighting available on higher trims. Base models get 17-inch wheels, while 18- and 19-inch versions appear on higher trims. A sporty R-Line cosmetic package, including 20-inch wheels, will be available on the SEL ($1,795) and SEL Premium ($1,495) with late availability.

Though still a compact SUV, the Tiguan is bigger than its predecessor, growing 10.6 inches front-to-back and gaining as much as 58 percent more cargo space. VW says the Tiguan has been redesigned specifically for the American market, though we wonder if perhaps the awkward name should have been part of the redesign as well (TIGG-juan? tig-you-AHN?).

Volkswagen's 4Motion all-wheel drive is an option at any trim level, but FWD is standard. Like many AWD crossovers, the front wheels are driven most of the time for fuel efficiency reasons, with the rears driven only when needed. A rally monster it isn't, but those who live where the roads get slippery can pick up the $1,300 AWD option. 4Motion Tiguans get a number of drive modes that change things up a little bit, but I suspect the vast majority of owners will just leave that knob alone. 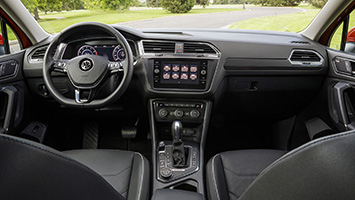 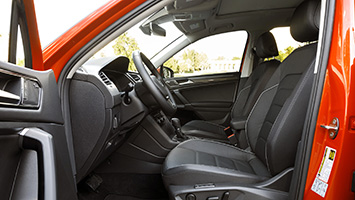 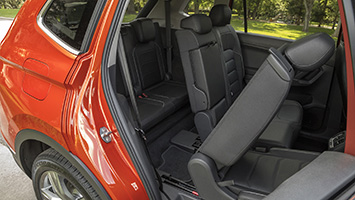 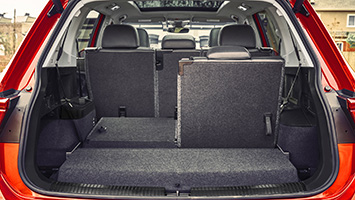 FWD Tiguans get a standard third-row to seat seven, though anyone over the age of 12 will want to avoid sitting in the back on all but the shortest trips. The third-row is a $500 option if you opt for all-wheel drive.

Opt for anything above the base S model and you get an excellent capacitive touch eight-inch infotainment screen with support for Apple CarPlay and Android Auto. A slick 12.3-inch Digital Cockpit cluster, borrowed from corporate cousin Audi, is standard on the SEL Premium trim. The car has several USB ports in front, and one in back, as well as a 12-volt power port for the front and middle rows.

Tiguans with the SE trim and above get an eight-way power driver seat, but the passenger seat remains manually adjusted. The small center console featured a driver's armrest located too low for your author, at five-foot-eight, to use at all. Our six-foot driving partner didn't have the same issues, so it may not affect everyone. Still, for a car designed for road-tripping Americans, a tiny, impractical armrest seems a weird oversight.

Plastic surfaces and trim pieces are everywhere and, though it seemed solidly built, what was fine on the entry-level was out of place at the top. A terrific panoramic sunroof is a $1,200 option on SE Tiguans, and is standard on SEL and SEL Premium. The warranty is an impressive six-year/72,000-mile bumper-to-bumper guarantee that is transferable to later owners. 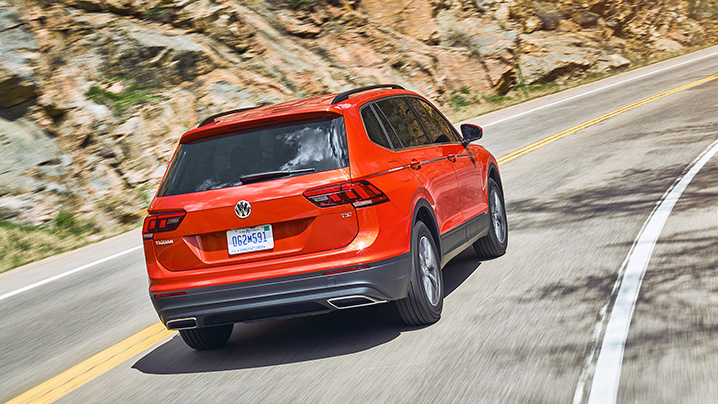 And then we get to the engine. It's an all-new 2.0-liter four-cylinder turbo TSI unit, putting out 184 horsepower and 221 pound-feet of torque – and it's a dog. We don't know if it was the altitude in Denver or the sluggish transmission or what, but if you're at a stop and plant the gas in the floor ... nothing happens. After what seems like an eternity, the car finally sets off. At 70 miles per hour, the car is smooth and quiet, but any sort of acceleration is interminable. It's as if the car wants to make sure that you actually want to go, and needs to verify it in triplicate.

The seven-passenger AWD Tiguan sports a curb weight just north of 4,000 pounds, and the engine simply isn't powerful enough. Worst still, the little turbo doesn't even deliver fantastic fuel economy as a trade-off for its poor performance. The FWD Tiguan delivers 22/27/24 miles per gallon city/highway/combined, while the AWD does even worse at 21/27/23 mpg.

Engine aside, the Tiguan is roomy and comfortable, and the price is largely competitive with others in the segment. We like the Euro-design and the center infotainment screen is terrific. It won't be hard for Volkswagen to improve on the sales of the previous Tiguan. But, going up against proven winners like the Toyota Rav4 and the Honda CR-V, it may be tricky for Volkswagen to carve out more than a niche. 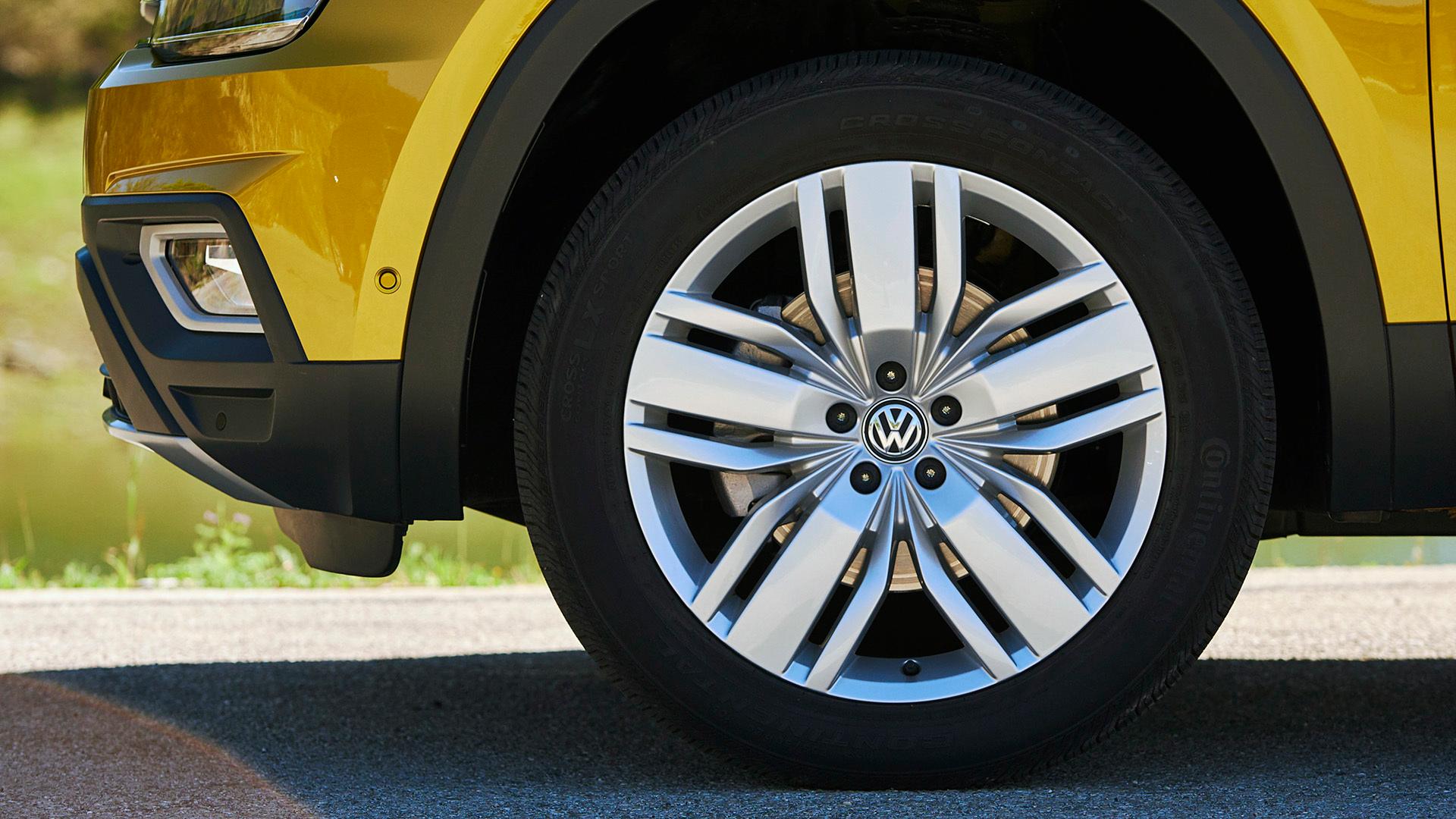