If you look at the 2017 Forester XT Touring and don't notice the changes compared to the 2016 model, we won't blame you. They're subtle. The naturally aspirated models get a new front bumper that matches the surrounding body color, but the turbo model we drove still has the black gap in the middle. The grille gives up the wide mesh look for a pattern that subtly accentuates the Pleiades badge. Look into the updated Forester's eyes, though, and you might see a new spark of beauty, with a redesign that prominently features a surrounding strip of LEDs. There's also a new color; our test vehicle came in the new-for-2017 Sepia Bronze Metallic paint, a tasteful brown(-ish) that might let you get away with going longer between washes.

On the inside, this Forester had the new Saddle Brown leather interior exclusive to the Touring trim. It's the rich sort of brown that reminds one of a rustic but well-appointed hunting lodge, where one would expect to catch a whiff of pipe tobacco and whiskey. It just smelled like a normal car, though, at least before we got in it. Touring spec also offers up a heated steering wheel and seats, the automotive equivalent to a chair in front of the fireplace. Most touch points are attended to with sturdy-feeling materials, and the most important one – the wheel­ – feels grippy and comfortable without being overwrought.

The front seats are firm but comfortable, with an upright seating position. They're a bit reminiscent of those moderately expensive high-back office chairs, except in this case, the office rolls around with the seat. Sitting behind them isn't bad, either, as they're shaped in a way that carves out extra room for the knees. The door openings are large enough to make ingress and egress an easy task, which is a merciful thing, especially when wrestling a car seat into the back. As for our own rear-facing kid carrier, it fits in the Forester just fine, but, when clipped in the passenger side, means the front occupant is just one click closer to the dash than they'd be ideally. Their knees won't be crunched into the glove box, though (that's a position some of us have learned to live with in other cars with a rear-facing car seat installed). 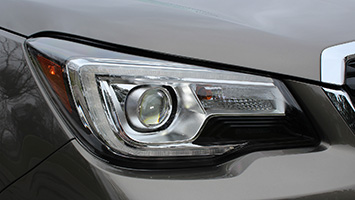 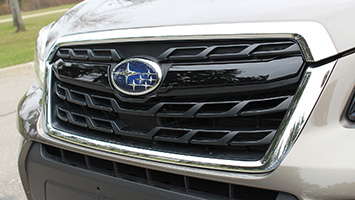 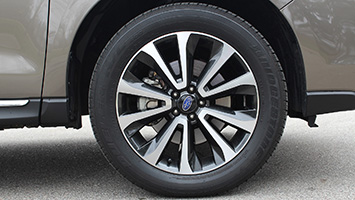 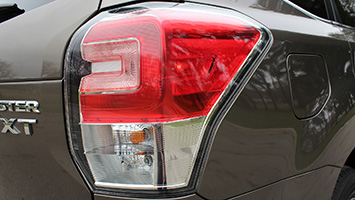 The view from the driver's seat is exceptional. Tall, wide windows let you keep track of everything that's going on around you. They also bring in a lot of light, and piloting the Forester is a bit like driving a greenhouse on wheels. Open up the panoramic moonroof for maximum exposure. Generous mirrors and a rearview camera help take some of the mystery out of parking, too.

The displays are numerous in this Forester, and having info heavily clustered in different places feels a little disorganized. There is a seven-inch central touchscreen, a smaller multifunction display on the dash above, plus a third digital display between the gauges on the instrument panel. The glass of the central touchscreen extends beyond the edges of the display, with indentations where the important buttons reside on either side. The actual graphic quality of the LCD screen is crisp and clear, making it easy to follow the directions provided by the navigation. The system lags behind the control inputs, though, and the address entry process is downright frustrating.

The driving experience totally makes up for these quibbles, we're happy to report.

The Forester features Subaru's SI-Drive system, which has different modes that govern the transmission and throttle behavior. In order of increasing intensity, they are I, S, and S#. I, which stands for "intelligent," gives you the best fuel economy, tempering throttle response and keeping CVT ratios conservative. S (or "sport") is sort of the happy medium for normal driving, with enough power on tap to make a move when necessary, but maintaining smooth acceleration and transmission response. S# ("sport sharp") provides, as one would expect, the sharpest, high-revving performance from the motor and CVT. It means the Forester snaps to life and stays there with a tap of the right pedal, but it also means she'll be drinking more fuel to keep her wits sharp. 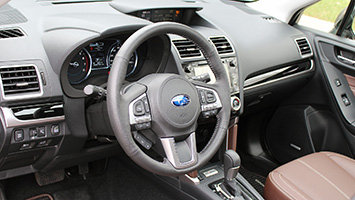 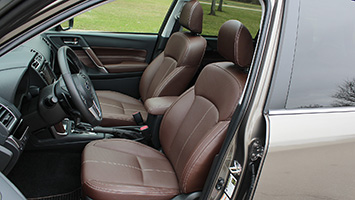 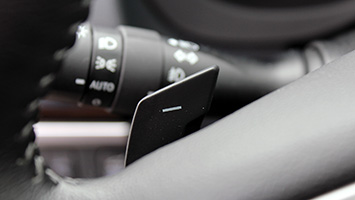 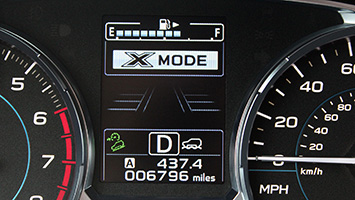 The Forester 2.0XT feels refreshingly quick, especially for something so blocky and brown. The XT is like that little rocket you built out of cardboard boxes as a kid, only now you're an adult and your little brown box actually moves. Accelerating from a stop with S# selected, we watched the needle sweep past 60 miles per hour in a little over six seconds. Engine noise is kept largely in check, but the little whistle and whoosh we heard from the turbo was enough to get a gleeful hoot out of us as we were gently tugged back in the seat. Even at highway speeds, it felt like there was always a reserve of power deep enough for any sort of sane speeds you'd ever need to conjure up from this family hauler.

The CVT sorts things out well enough on its own without ever feeling like it's getting in the way, but for those with the need to be a bit more involved in their driving, there's a manual mode on the gear lever, as well as a pair of paddle shifters on the back of the steering wheel. In I or S mode, you can choose between six different ratios, but S# mimics an eight-speed automatic. The Forester will also hold onto a virtual gear indefinitely, bumping up against the rev limiter until the driver shifts.

Really, though, one of the actual advantages of a CVT from a driving standpoint is the constant tug of acceleration, firmly but gently pushing you into your seat without having to pause for a shift. After a few stints of playing with the paddles, we found we preferred to let the car manage the transmission in normal driving. It was nice to have the option on hand, though, for the couple times when we were heading downhill or preparing for a quick overtake of a slower driver. 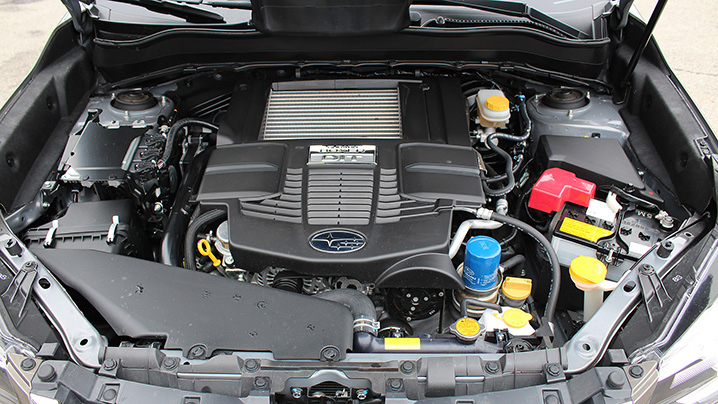 For most daily driving, the Forester offers nicely sharp handling when you need to point and shoot through holes in traffic (having that extra power on tap using the S# mode makes it easy to fill those gaps, too). In the curvier stuff, we saw mixed but predictable results. Turn-in is just a smidge on the softer side of crisp – let's call it al dente – and the feeling from the front wheels is pretty darned telepathic. The Forester responds quickly to inputs from the tiller and is eager to dice back and forth (in fact, Subaru tightened up the steering for 2017, at 14: 1 compared to 15.5:1 in the previous model). The harder you turn, though, the smooshier the Forester gets.

As you start to really push the Forester in the corners, you'll be reminded that, despite what's under the hood, this is not a WRX. A highway cloverleaf interchange is the perfect place to get a sense of the Forester's limits in a short amount of time. It starts to lean when carrying speed through a corner, but it builds up progressively and doesn't catch you off guard. Wheels start to complain a bit, too, but it remains pointed right where you steer it. Thank the torque vectoring system – standard in the 2.0XT Touring with EyeSight – for that. Body roll and grip loss all happen in foreseeable linearity, and the Forester's great communication skills mean you're not likely to find yourself pushing the car into some sort of surprise catastrophe.

For 2017, the Forester gets some advancements in its EyeSight safety technology suite. The new color cameras capture more of their surroundings. In addition to providing adaptive cruise control, the system offers a lane departure warning (along with an assist feature to nudge it back into the center of the lane), pre-collision braking, blind-spot detection, rear cross-traffic alert, and reverse automatic braking. Despite periods of heavy traffic and late wintry weather, our drive time with the Forester was uneventful. We declined to engineer any simulated emergencies, so we didn't have the opportunity to really test these safety systems out. We think that speaks to the ease of driving the Forester. 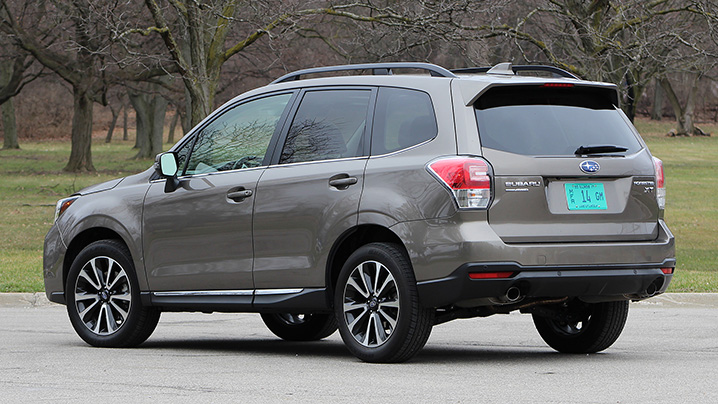 Probably our biggest nag in day-to-day driving was the amount of road noise that made its way into the cabin, especially at highway speeds. As velocity increases, a sort of white noise slowly rises from the floor to fill the car's interior, while the tires produce a roar that – at least on one rainy drive to the office – had us looking out the window for airplanes passing overhead. Subaru did some work to make the car quieter for 2017, though, and truth be told, we didn't hear much wind noise through the improved glass.

We didn't take the Forester over any extreme terrain (unless you count Michigan's cratered post-winter roads), so didn't take advantage of the X-Mode button located forward of the gear lever. It helps make the most traction off-road, and has hill-descent control, perfect for when your kid's swimming lessons are in a glacial pond at the bottom of a mountain. Be honest. You're probably not going to use it either.

The turbocharged Forester does a lot. It's roomy, easy to pilot, and joyfully swift. It combines elements of both a WRX and an off-roader, while still being the sort of car that tackles all the normal commuting, grocery getting, and school bussing for which normal people will use it on a daily basis. In Touring trim, it also offers a decent level of comfort. For such a mainstream family vehicle, the 2017 Forester 2.0XT still has a lot of personality, much of which comes from what's under the hood. The rest is a bit quirky and lovable, despite its faults, and we found ourselves emphasizing how fun it is rather than complaining about nav or noise when it came up in conversation. That's sort of the essence of driving a Subaru, though, isn't it?