Look past that funny face and Kia's new Sportage is a well-rounded, competent crossover.

View All Specs
It's hard to get excited about most mainstream crossovers, but the truth is this is one of the hottest segments of the market right now. The automotive space is saturated with a glut of these profit-making, two-box, semi-practical, soft-roading vehicles, and the tide isn't likely to abate soon. At first blush, Kia's redesigned 2017 Sportage isn't the most eye-catching of new products, but it's poised to do very well in the ongoing CUV wars.

Progress in this kind of battle is often measured in inches of space, and the 2017 Sportage grows both inside and out. The new Kia measures the same 73 inches wide as its predecessor, but it gains 1.2 inches on the wheelbase, and 1.6 inches in overall length. There's more room overall for passengers, and there's 18-percent greater cargo space in back. Plus, the luggage floor can be moved down into a lower position to make more vertical space when needed. 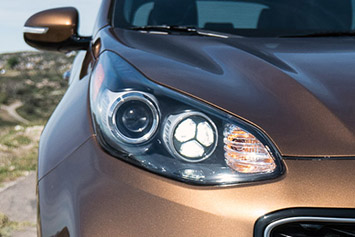 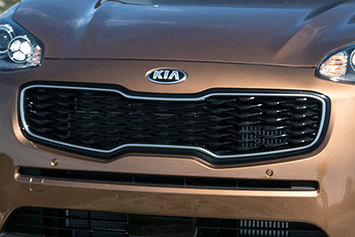 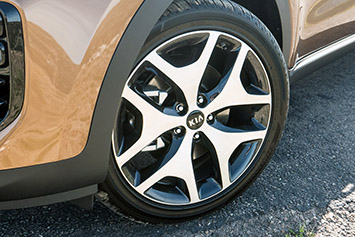 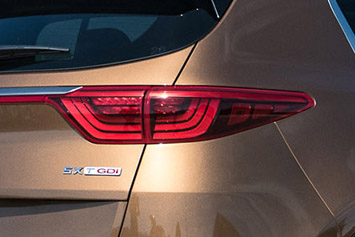 The Sportage was penned by renowned designer Peter Schreyer (he of first-gen Audi TT fame), but the end result is a bulbous-looking crossover, especially when viewed from the front – it's like a chipmunk with too many acorns in its cheeks. The "tiger-nose" grille – a hallmark of Schreyer – was moved up to accommodate the "ice-cube" fog lamps, while the headlights sweep back along the sides of the car. The A and C pillars are thinner, allowing occupants better visibility from inside the car, but from the outside, the rear three-quarter view looks blocky and cut up. The rear doesn't seem to match the rest of the car, either – it's more svelte and understated.

Looking past its exterior design, the new Sportage is marginally, uh, sportier, thanks to a new, lighter, stiffer body, a redesigned suspension, and new engine tuning. Kia is mostly chasing improved fuel efficiency with its latest powertrain updates, as both engines have slightly lower outputs than their predecessors but have marginal improvements in fuel economy. The entry-level 2.4-liter inline-four (same as the Optima and Sorento) puts out 181 horsepower and 175 pound-feet of torque – decreases of only 1 hp and 2 lb-ft – and can be had with front- or all-wheel drive. Step up to the top-of-the-line SX Turbo and you get a 2.0-liter turbo-four that puts out 240 hp and 260 lb-ft of torque (that's 20 hp and 9 lb-ft less than before). Kia estimates the 2.4/FWD combination will return 23 miles per gallon city, 30 mpg highway, and 26 mpg combined, while the 2.0T/AWD will score 20/23/21.

With front-wheel drive, it's possible to get the Sportage's rear end to unset itself on a winding road – it's not our first choice. Instead, the Magna Dynamax all-wheel-drive system electronically senses the road and anticipates slide events and can brake individual wheels to prevent or mitigate traction loss. The system can push as much as 100 percent of the power to front or rear wheels as needed, and there's even a 50/50 locking differential – you know, for those times when you have to scale a small snowbank to get to soccer practice. 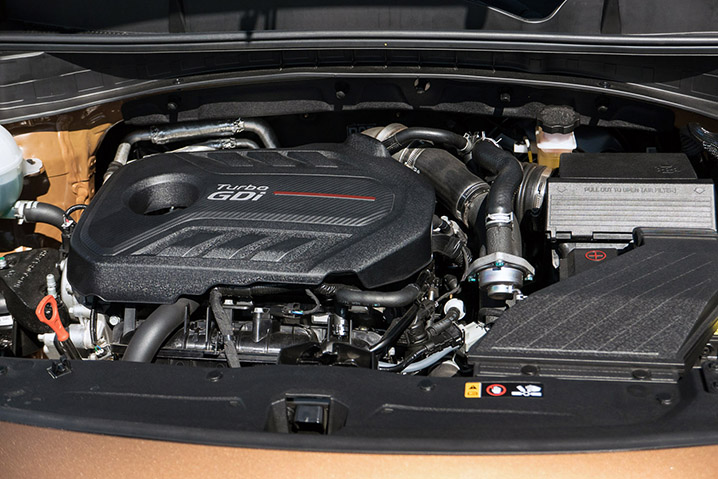 We ventured down a light off-road path around Julian, CA, and found it easy to get a good sense of the surface beneath the tires, while still enjoying a relatively comfortable ride on paves surfaces (though the hard, flat seats do leave a lot to be desired).

The Sportage comes with Eco, Normal, and Sport driving modes, and while suspension dynamics don't change between the settings, throttle response and steering weight are altered. In Eco, the throttle is numb, the steering is incredibly vague, and the six-speed automatic transmission shifts as early as possible (fuel economy!). In Normal, you get slightly more responsive acceleration and a touch more weight in the steering – here, you don't feel a constant lack of power, and for standard daily driving, this mode offers a good balance of feedback and comfort. In Sport, the throttle is, of course, more lively, and the transmission happily holds gears higher up in the rev range. The steering becomes more direct and there's more weight, but it's not going to wow you with its impeccable response.

Inside, the Sportage gets a more luxurious interior and a suite of (optional) technology. Softer touch materials that look like leather, even if upon closer inspection they aren't, are littered throughout the cabin. A full leather interior becomes available at the mid-level EX range. The new Sportage is quieter, too – Kia increased the amount of noise reduction material in the wheel wells and inside the cabin. It's not Lexus quiet by any means, but the new Sportage is a bit more hushed on the road than the previous model. 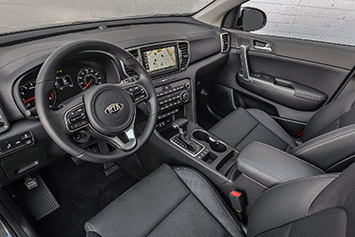 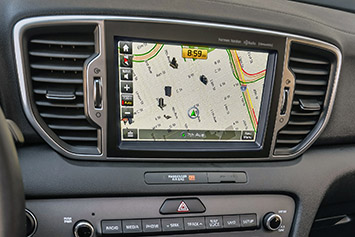 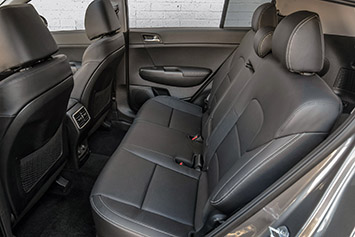 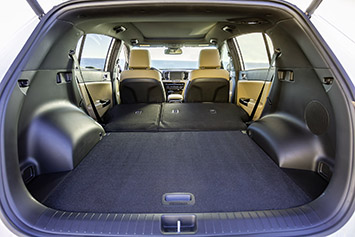 The UVO infotainment system is fairly intuitive to use, and bright enough to read easily, even in the California desert sun. In the base Sportage LX you only get a five-inch screen, but up-level EX and SX Turbo models get a seven-inch headunit. It's simple to move through menus on the UVO system, but from the passenger seat it is downright difficult to reach. You can't input a navigation destination while already underway – this, and other settings, have to be done while the vehicle is in Park. Between those lockouts, plus the driver-angled position of the screen, passengers are pretty much useless in terms of accessing UVO's functionality. Kia is also still sorting out details of how to roll out Apple CarPlay and Android Auto, but assured us that both will be available in the new 2017 Sportage eventually. That said, early buyers might have to take their cars back to the dealer for an update in order to get this technology.

You can buy a new Sportage with forward collision warning, autonomous emergency braking, blind spot detection, lane departure warning (with an annoyingly persistent alarm that thankfully you can turn off with a button on the dash), and rear cross traffic alert. Surprisingly, there is no option for adaptive cruise control. Kia executives indicated that integrating the cameras into the drive system is more cost prohibitive than they would like. This is a hugely popular feature these days, and it's a curious omission – many competitors offer this tech, including the segment-leading Honda CR-V. 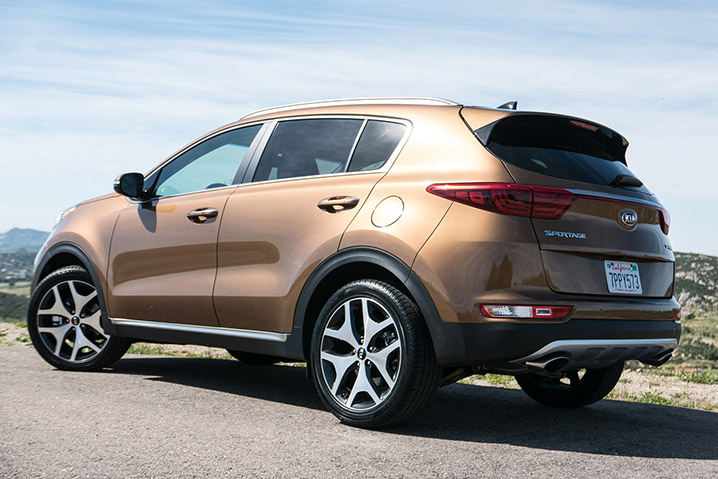 The 2017 Kia Sportage might just be another new crossover, but it's poised to do well within its class. For one, at $22,990, it offers a low cost of entry into this highly popular and competitive segment – even a loaded one will slot right around $35,000. It's a little awkward to look at, but it's at least distinctive – it doesn't just blend in with other CUVs, especially from up front. Overall, the 2017 Sportage easy to like and pleasant to use. That's hardly exciting, but in this segment, that's good enough. 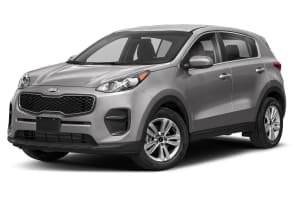