We tried living with the smaller trail-rated Jeep

The Jeep Compass Trailhawk is the smaller sibling to the Cherokee off-roader. They look a lot alike, and generally that seems to be a good thing. We spent some time with it, both in Michigan and the Pacific Northwest. It seemed like the perfect little ute to tackle rain and late snow, as well as the cratered roads surrounding Detroit every spring. Here's what we thought after spending some quality time together:

Editor-in-Chief Greg Migliore: The Jeep Compass is one of the coolest compact crossovers you can buy. Jeep has struggled to translate its genetics into smaller models, but they come through in this one. The Trailhawk trim provides plenty of capability. Even if you don't need it on a daily basis, the package adds design flourishes like red tow hooks and a two-tone black roof, which look slick. Our test model's olive green paint also puts off a heritage vibe. I like that. It's subtle, like wearing a watch with a NATO band.

The interior looks and feels premium, with leather seats, a leather-trimmed steering wheel and ambient lighting. Uconnect remains one of my favorite infotainment systems on the market, and its simplicity is an industry benchmark. The inline four-cylinder and nine-speed automatic transmission work well together. In fact, the smooth shifting surprises me, as I've had issues with this gearbox in other Fiat Chrysler vehicles.

Overall, I would consider the Compass among the better options for car shoppers. It stands out in a segment that's fairly vanilla, though the less flashy but well-executed Honda CR-V and Toyota RAV4 are formidable. I wouldn't get the Trailhawk trim on a Compass, but it's smart of Jeep to push this kind of off-road capability thoughout its lineup.

Associate Editor Joel Stocksdale: I've recently spent some time in the refreshed Jeep Cherokee, which I found to be a decent crossover, if not class-leading, and it had a distinctly truck-like feel, unlike its competitors. The Compass Trailhawk is just the same, except at about 2/3 scale.

The truck-like feel is what really stood out. The seating position is very tall, giving you a good view forward and of the corners of the Compass. Combined with the small size, it makes it very easy to maneuver around town, and likely on tight trails. The ride on this Trailhawk model is a bit stiff over small bumps, but it does soak up the large ones fairly well. This suspension and the raised ride height also make the Compass seem a little tipsy. The steering is weighted decently, but it's very vague and imprecise like a bigger truck. The engine is powerful enough to get the Compass around, but it does feel slow going up on-ramps. It isn't helped by the stunningly slow nine-speed automatic. At least it's smooth.

Inside, the Compass is hit and miss. There are quite a few cheap plastics, but the Trailhawk brightens things up with red painted trim here and there. UConnect is as good as always, though I wish the climate controls and radio controls were a little higher up on the dash. As it is, you have to reach pretty far down to get to them. The seats are pretty comfortable, though, and there's a good amount of cargo space. It's also fairly quiet, punctuated mostly by the buzzing four-cylinder.

While I liked the size and maneuverability of the Compass, as well as its stylish two tone paint and rugged body, it's truck-like tendencies put me off a bit. But it's entirely possible that people used to driving more traditional trucks and SUVs might appreciate the feel in the smaller package. It's also possible some of the characteristics are amplified in this off-road oriented Trailhawk model. I'm curious what a more roadgoing model would be like to drive, especially one with the manual transmission. Yes, regular Compasses can be had with a manual, and they can be paired with all-wheel-drive.

Contributing Editor James Riswick: The powertrain absolutely kills the Compass for me. FCA's 2.4-liter four-cylinder seems like it makes a competitive amount of power on paper, but in practice, it's a lot better at making noise than actual thrust. Making things even worse is the nine-speed automatic, making the Compass yet another vehicle let down by this woeful transmission. Its response to your right foot is downright poor, and when it eventually does choose to downshift, it often will get flummoxed about which of its many gears to choose. I attempted to pass a slow-moving car at one point, but by the time the powertrain actually responded to my foot firmly planted in the floor, passing-lane traffic had already caught up. My wife had to put up with a lot of complaining on that particular drive.

As this is the only powertrain available in the Compass, it certainly provides the answer to the question: Why should I get the Cherokee instead? Sure, its bigger brother actually has less space inside, but it's also offered with a V6 and a turbocharged four-cylinder for 2019. Sure, they're also saddled with the nine-speed, but it's definitely less of an issue with more power aboard. The Compass also seems less substantial and refined than the Cherokee, instead feeling more like a big Renegade when behind the wheel. That's not necessarily a bad thing as I actually like the Renegade quite a bit.

And I really should like this Compass a lot, too. My test car, seen in the photos above, wasn't painted the cool green that the gents in Michigan got, but I'd still say the Compass Trailhawk is one of the coolest-looking compact SUVs on the market. There's just so much style and character to it that I could easily see someone choosing the Compass despite its faults and better-sorted competitors. Plus, I echo Greg and Joel's thoughts on the interior's space and refinement. It should be a compelling, characterful package, which makes the powertrain all the more depressing.

Senior Editor (Green) John Beltz Snyder: I was impressed seeing the Trailhawk version of the Compass — I vehicle I'd normally care very little about — in the flesh. Visually, it captures a lot of the elements that drew me to the Cherokee back in my younger Jeep days in the late 90s. The tow eyes, bulging tires and selectors for four-wheel drive and terrain modes all make this feel like the real deal. I love the hints of red inside and out. I appreciate the modern touches, too. UConnect is a good system to use.

Driving it in my normal commute was a bit disappointing, though. Riswick sums up the powertrain woes pretty succinctly above. I might love the Compass Trailhawk if I were creeping over rocks or climbing that snowbank our Facebook fans were encouraging Reese to tackle during his Live Drive. On the city streets and highways of suburban Detroit, not so much. It made easy work of the springtime potholes, though. 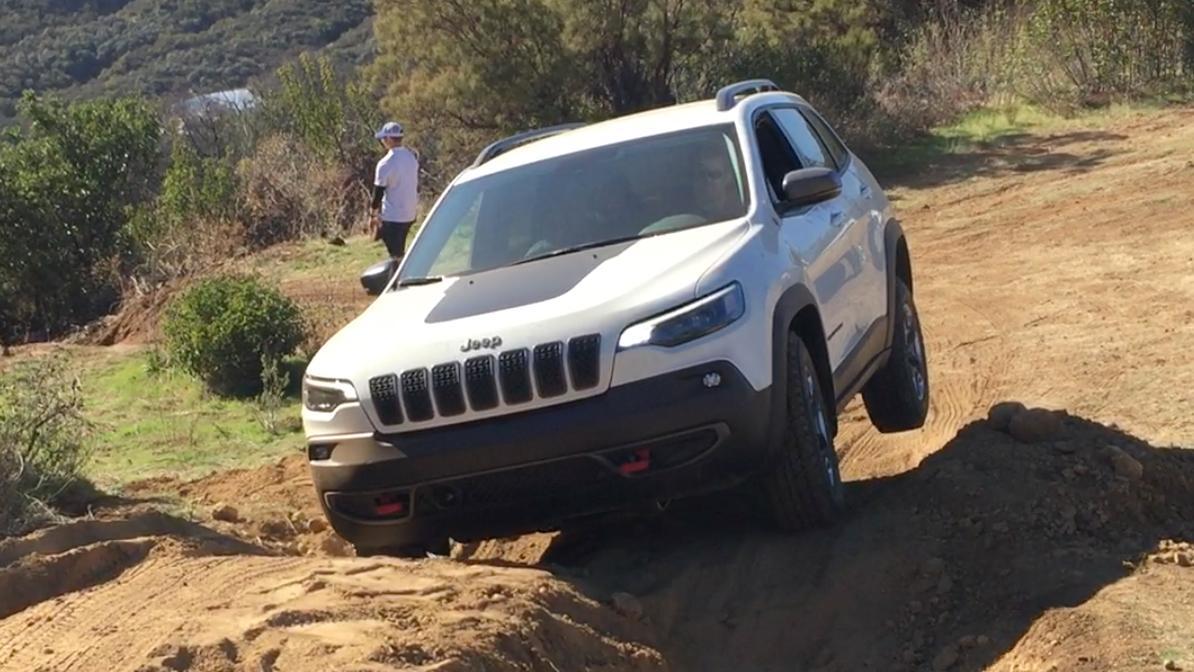