Compact utility vehicles make up the largest single segment in the American automotive industry. And with good reason – crossovers today very nearly match up with sedans in refinement and driving manners while providing respectable fuel efficiency and lots of cargo capacity. People buy them because they are practical, potentially filling multiple needs with just one vehicle.

The Honda CR-V was the best-selling vehicle in the compact CUV segment last year, and it has been redesigned for 2017. Major updates mean more space inside for passengers and cargo, a bit more power and efficiency from a new 1.5-liter turbocharged four-cylinder engine, and a quieter, more comfortable driving experience. The previous CR-V was already one of the best vehicles in its class, and the fully redesigned 2017 CR-V remains the best bet for your buck.

The first thing we noticed about the 2017 Honda CR-V was its size. We're all used to vehicles getting successively larger with every new generation, and true to form, Honda's compact crossover isn't really very compact anymore. The 2017 edition's wheelbase has been stretched 1.6 inches over the previous CR-V's, and it's 1.4 inches taller and 1.2 inches longer overall. Thankfully, those extra inches equal more room inside. 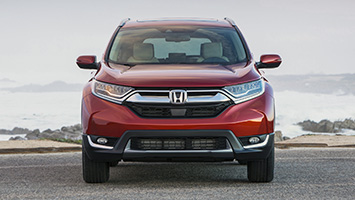 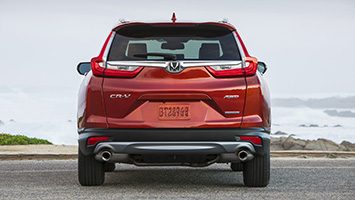 Rear-seat passengers get more than two extra inches of legroom compared to the 2016 CR-V for a total of 40.4 inches. Competitors like the Ford Escape, Nissan Rogue, and Toyota RAV4 all have around 37 inches of rear legroom. With the back seats folded flat, the cargo area is nearly 10 inches longer than before. There's 39.2 cubic feet of cargo space with the rear seats up, or 75.8 with the second row folded. Those capacities are at least as good as those of its main competitors, though it's worth noting that the Rogue is offered with a small third row for a total of seven seats.

Honda designers did a decent job of masking the new CR-V's bigness with shapely bodywork highlighted by muscular, bulging fenders and detailed lighting elements front and rear. A prominent horizontal chrome bar leads the way, flanked by LED headlights with strong Nike-swoosh-shaped daytime running lights. The rear light clusters are massive, with a clear plastic enclosure that juts far out from the bodywork. It's strange, then, that the actual amber turn signals are small vertical slits that don't really stand out in daylight. 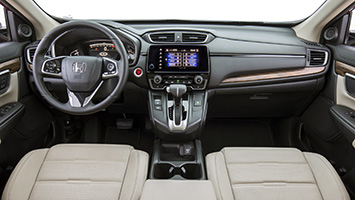 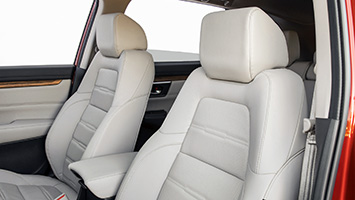 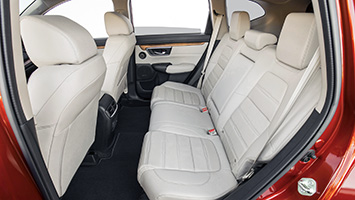 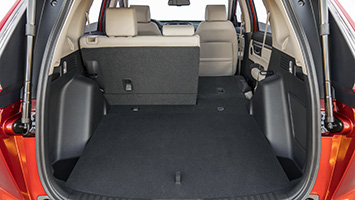 Inside, the 2017 CR-V is thoughtfully laid out, and we applaud the addition of an actual volume knob for the seven-inch Display Audio system. We drove a Civic the same week as the CR-V and bemoaned the fiddly capacitive volume interface that most Honda products still use. We're also pleased to see Apple CarPlay and Android Auto added to the CR-V's infotainment package. Leather comes standard on EX-L and Touring models.

Clever features inside the 2017 CR-V include a two-level rear package shelf, a reconfigurable center console, and a height-adjustable power rear liftgate. You can get a better idea of the interior appointments in our Short Cut videos below.

From the driver's seat, all the controls and dials you'll use on a daily basis are within easy reach and are clearly marked, with the exception of the twin meters flanking the digital gauge cluster on EX models and above. The gas gauge and temperature gauges use tiny little bars that light up instead of simple dials or readouts, making them difficult to read at a glance. If you think we're being picky about little things like the gas gauge, you're absolutely right. That's because Honda pretty much nailed the 2017 CR-V package, and the good vibes continue out on the road.

Base LX models carry on with a 2.4-liter four-cylinder engine with 184 horsepower and 180 pound-feet of torque. But the big news for 2017 is the 1.5-liter turbocharged mill that comes standard across the rest of the range. The turbo engine spins out 190 hp, and even though it's technically down a single pound-foot compared to the bigger naturally aspirated powerplant, its 179 lb-ft peak at 2,000 rpm and stay available until 5,000. The EPA estimates that turbocharged CR-Vs will manage 28 miles per gallon in the city, 34 on the highway, and 30 combined. Drop one mpg across the board with all-wheel drive. Not only is that better than the 2016 CR-V, it's also better than comparable Ford Escape, Nissan Rogue, and Toyota RAV4 models.

In normal driving conditions, the 1.5-liter turbo feels plenty peppy in the CR-V. That's partly due to Honda's CVT transmission, which, like the units in the Accord and Civic, is equipped with a torque converter for smooth initial acceleration. Unless you floor the accelerator and leave it there until well past the legal speed limit, the endless drone you hear from some competitors' CVT gearboxes is notably absent in the 2017 CR-V. Honda's CVT mimics traditional stepped-gear transmissions by adjusting the engine speed in part-throttle driving conditions. That strategy may not be as ultimately efficient, but it's more satisfying for the driver and it allows Honda to avoid the dreaded rubber-band effect that CVT owners so often complain about. 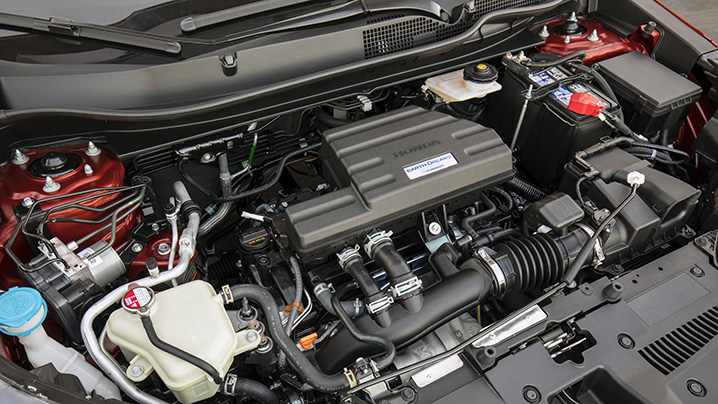 Honda's Real Time AWD is a $1,300 option across the board, and can send up to 40 percent of the engine's torque to the rear wheels. Hardware changes allow a 57-percent increase in the amount of power sent to the rear axle, and you can monitor that torque spread on the digital gauge cluster. There aren't any settings for the all-wheel-drive system – it's always on, and automatically chooses which wheels to spin. In other words, Honda doesn't think CR-V owners need specific off-road modes, and we agree. In the rainy or snowy conditions that the CR-V is likely to encounter, the set-and-forget Real Time AWD makes perfect sense.

Most 2017 CR-Vs will be equipped with Honda Sensing, a suite that includes safety technology like collision mitigation, lane- and road-departure mitigation, adaptive cruise control, and lane-keeping assist. Instead of using Honda's LaneWatch system, which displays an image from the right side of the car on the central LCD display, the 2017 CR-V gets a more traditional blind-spot warning that flashes an illuminated image on the side mirrors. And if all these safety systems sense that you're tired or not paying attention, you'll get a coffee cup icon on the dash reminding you to take a rest or get caffeinated.

It would be nice if these safety packages were standard across the board, but instead they come as part of the EX equipment grade that starts at $27,595. Buyers of the $24,945 LX model get a rear-view camera, but the Honda Sensing suite is notably absent. 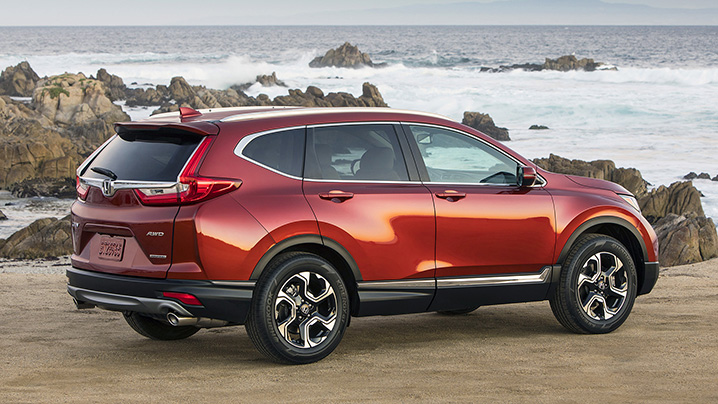 The 2017 CR-V's chassis is well sorted. The ride is firm but compliant and remains well controlled even on rough pavement. The variable-ratio electric power steering is direct, nicely weighted, and never feels too artificial. We drove the new CR-V back-to-back with the 2016 Ford Escape and Toyota RAV4, and found the Honda offers the best ride-and-handling balance of the three. The Ford is a bit sharper in quick transitions but feels harsher everywhere else, and the Toyota is comparatively numb and lifeless.

Ford offers a 1.5-liter turbocharged engine in the Escape that we compared with the CR-V. Some of the difference between the two can be attributed to the Escape's conventional six-speed automatic transmission, but even so the CR-V felt punchier and more powerful. Toyota sticks with a naturally aspirated 2.5-liter four-cylinder in the RAV4, and the engine doesn't make good power until high in its rev range. Both the CR-V and Escape felt torquier at low revs and quicker at full throttle.

Naturally, at-the-limit performance isn't what the CR-V or its competitors are all about. These compact CUVs are aimed straight at young couples and families who want more utility than most sedans can offer. And in that role, the CR-V is the best of its breed. It's roomy, comfortable, and efficient – all qualities that make us think the 2017 CR-V will stay perched atop the best-selling crossover column for quite some time.