2020 Kia Telluride comparison: Specs and pricing versus other 3-row crossovers

Kia's all-new SUV is big, powerful and competitively priced for the segment

James Riswick
The 2020 Kia Telluride is a three-row family crossover that slots into the top spot in Kia's SUV lineup. It does not replace the three-row Sorento — rather, this bigger, more luxurious model is intended for those who need even more space. And that they'll certainly get, because as you'll see below, the Telluride is one of the biggest crossovers on the market.

In this comparison of engine specs, dimensions, pricing and photos, we'll take a look at the 2020 Telluride versus the Honda Pilot, Subaru Ascent, Toyota Highlander, the all-new 2020 Ford Explorer, and the Telluride's mechanically related cousin, the equally new 2020 Hyundai Palisade. Of course, those just represent one corner of an iceberg that also includes the Mazda CX-9, Chevrolet Traverse, GMC Acadia and Dodge Durango. 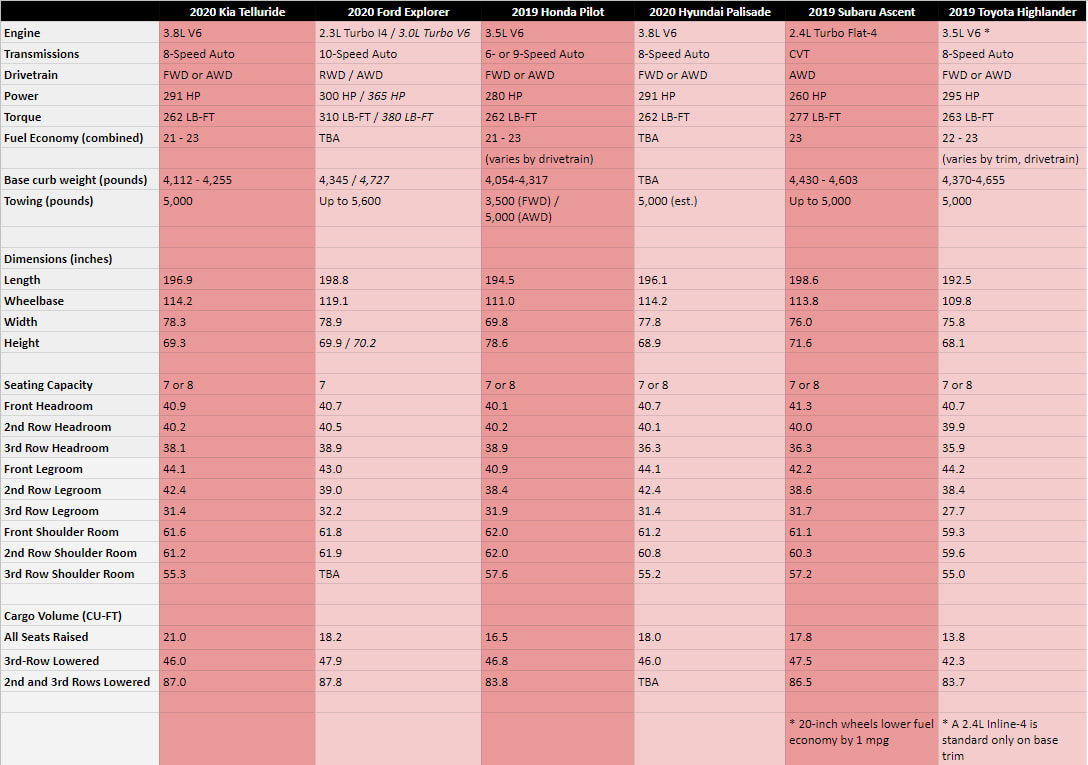 Like most other entries in the three-row segment, the Telluride offers seven- or eight-passenger capacity. The difference is determined by whether you get second-row captain's chairs. Judging by the Telluride's 55.3 inches of third-row shoulder room, it looks like it won't be quite as spacious with three kids across back there as it would be in the Pilot or Ascent. Two inches can make a big difference in this regard. Third-row legroom is very competitive, however, and if it's indeed just as spacious back there as the Pilot and Ascent, two full-sized adults should be able to fit quite comfortably. Its third-row headroom is also quite good, one of the areas in which the Telluride surpasses its otherwise comparably sized Palisade cousin.

If you're wondering about second-row space, there's really nothing outstanding to glean from these specs. As expected for this segment, it's huge, with abundant leg- and headroom. There should be no problem fitting child seats.

The Telluride would seem to have class-leading space behind its raised third-row seat. If we were to guess, this is the result of its rather boxy tailgate and roofline design. This should also help explain why it has more maximum space than all but the Explorer. Space with the third row lowered is middle of the pack, but when you're talking about vehicles this size, the differences in cubic feet behind the second-row ultimately don't matter much.

The Kia Telluride has the same powertrain as the Hyundai Palisade, although their tuning and consequent driving experience may differ even if their specs are seemingly the same. That's something we'll discover once we get to drive both here in the United States. In terms of output, its 291 horsepower is among the strongest in the segment, and with one of the lowest base curb weights, acceleration should be as well.

The EPA estimates that the front-wheel-drive Telluride will get 20 mpg city, 26 mpg highway, and 23 mpg combined, while all-wheel drive reduces estimates 19 mpg city, 24 highway, and 21 combined. As you can see, this puts it inline with the segment norm.

Although we're still waiting on some final specs for the 2020 Kia Telluride, we do know how much it will cost after pricing was announced during the Chicago Auto Show. The base, two-wheel-drive LX trim levels starts at $32,735, including the $1,045 destination charge. That's $240 more than the Pilot, but $155 less than the Ascent (which comes standard with all-wheel drive) and a whopping $1,740 less than a base V6-powered Highlander. Explorer and Palisade pricing were not released at the time of this writing. Also, if you're wondering, a Sorento LX would be $5,400 less.

Importantly, standard equipment seems comparable, if just a bit better thanks to standard simulated leather upholstery (versus cloth) and an 8-inch touchscreen (versus the smaller standard screens of competitors. Like all of the above competitors, the Telluride comes standard with accident avoidance tech features like forward collision warning, emergency automatic braking and lane-keeping assist. Adaptive cruise control is also standard along with USB charge ports in all rows, rear parking sensors and proximity entry with push-button start.