​Race recap: 2015 British Grand Prix is a testament to timing

In front of his home crowd, Lewis Hamilton actually had to work for pole position at the British Formula One Grand Prix. The World Champion couldn't get on top of the setup for his Mercedes-AMG Petronas on Friday, lapping behind teammate Nico Rosberg and the two Ferraris. Come Saturday, after a few alterations and a whole lot of wing to clamp down on understeer, Hamilton returned to his regular program at the front, taking pole position by just over a tenth of a second from his teammate.

Williams, thought to be headed for another stretch in the weeds a few races ago, showed its best strength all year. The Grove team got both cars on the second row and in front of the Ferraris, Felipe Massa qualifying ahead of teammate Valtteri Bottas, but they were eight and nine tenths behind the Mercedes'. Kimi Räikkönen out-qualified Ferrari teammate Sebastian Vettel for the second time this year, and only the first time in a straight-up battle with two healthy cars. But more than a second behind the two cars at the front, and with two nearly-impossible-to-pass Williams' in front, neither the Finn nor the German is happy with where they are.

Daniil Kvyat claimed seventh, his side of the garage at Infiniti Red Bull Racing having got through the weekend to that point without a single complaint about their Renault power unit. Carlos Sainz, Jr. put a single Toro Rosso inside the top ten in eighth position, ahead of Nico Hülkenberg who did the same for Sahara Force India by slotting in ninth.

The second Infiniti Red Bull driven by Daniel Ricciardo did have an unspecified engine complaint – his car kept "bleeding power" on the straights – but even so he managed to qualify tenth with his second-fastest lap. The stewards deleted his best lap because he ran three centimeters outside the track limits at Copse, an infraction that stung a few other drivers as well. Up in front, what would sting the Mercedes-AMG Petronas drivers the most was the start. 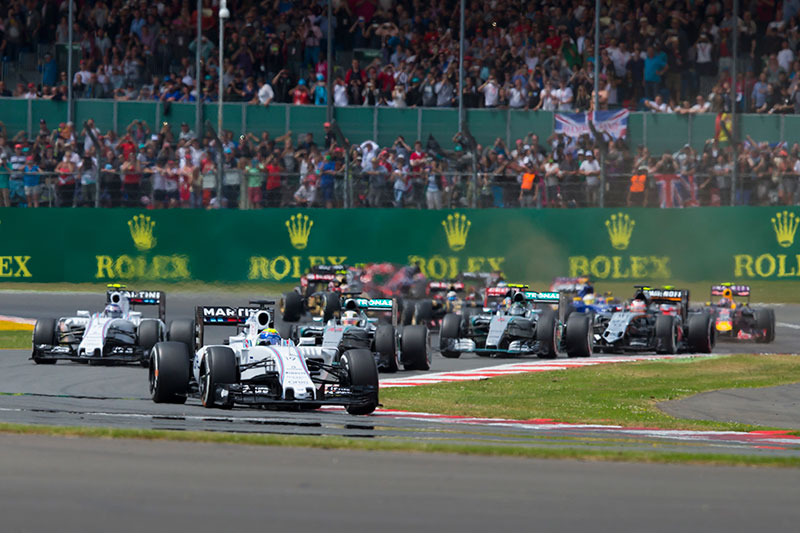 That's when a dearth of grip struck both Hamilton and Rosberg, allowing Massa and Bottas to slide right up the middle between them and take the first two places. The leapfrogging was so surprising that it looked like the Mercedes drivers were giving the Williams drivers a head start. They diced through the first corners, Hamilton sliding past Bottas into second place halfway through the lap. 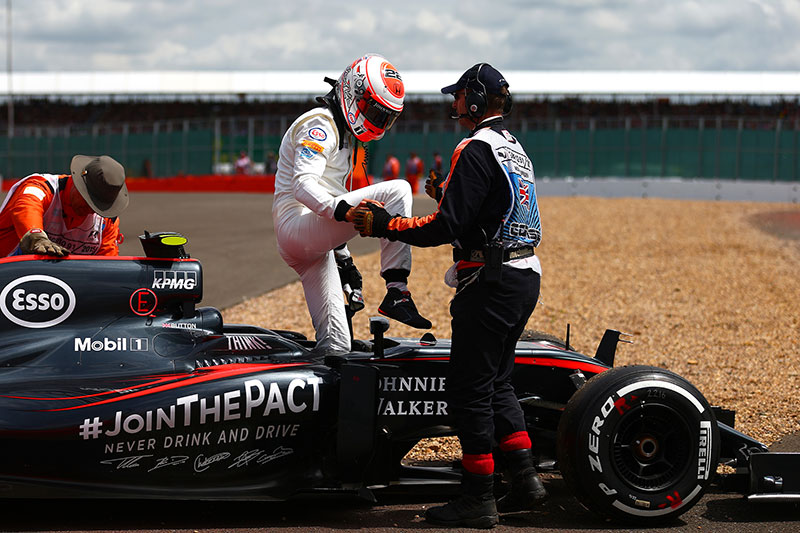 And then the safety car reported for duty. Back in the pack, Daniel Ricciardo tried to slide under the Romain Grosjean into Turn 2, catching Grosjean by surprise. The Frenchman jinked to the left and into his teammate Pastor Maldonado, who then bumped into Fernando Alonso in the McLaren, who then slid around back-end first and plowed into Jenson Button, whose engine shut off instantly on impact. Grosjean, Maldonado, and Button got sent packing from the race. Alonso had to hit the pits for a new nose. 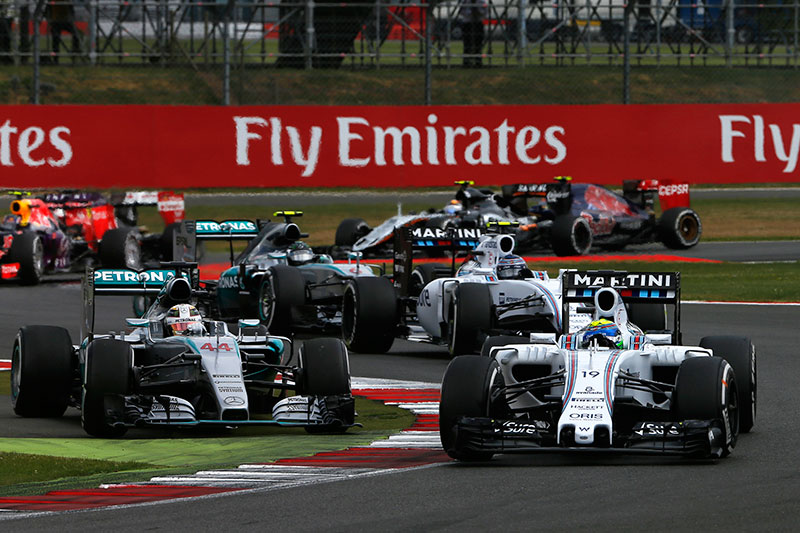 After two laps behind the Safety Car, Hamilton tried to blast his way around Massa around the outside when racing resumed but instead ran off the track and let Bottas through again, relegating himself to third. Silverstone is a fast track, but passing in dry weather is a challenge, meaning the Mercedes-powered Williams' had their way, going faster than the Mercs behind. 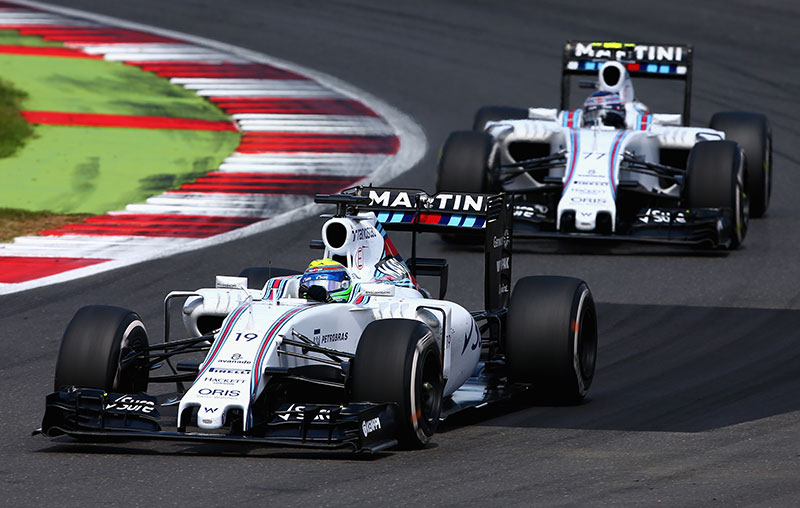 We'll never know how much faster they could have been, though. Bottas, in the second Williams, was faster than his teammate Massa in the lead, but Williams told him not to race Massa. For eight laps Bottas stalked Massa, clearly faster, asking if he could pass and being told "No." On Lap 11 the team told him he could pass on the back straight but his window had closed, and he stayed in second place.
This kept up until Hamilton pitted on Lap 19, then came out in clear air. Massa pitted a lap later and fell victim to Hammer Time – the Mercedes driver had ripped off fast laps and took the lead while the Williams got new tires. When Bottas pitted, he narrowly managed to stay in front of Rosberg in spite of both of them rolling down the pit lane next to one another. 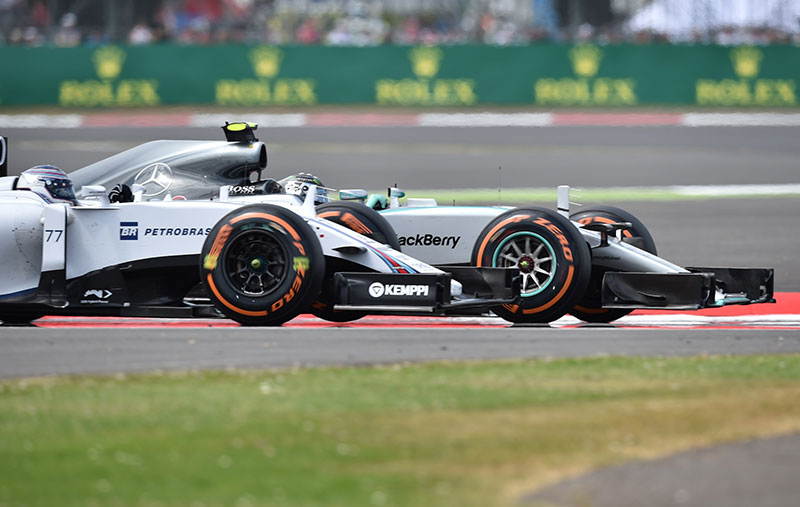 Rosberg trailed Bottas for 14 laps, but as the track got slick and Bottas dallied with his engineer about coming in for intermediate tires, the German closed the gap. On Lap 38, with the Williams and the Mercedes sliding around the wet parts of the circuit, Rosberg got around Bottas on the inside of Maggots and made it stick, taking third place. Three laps later, Rosberg, suddenly flying, passed Massa at The Loop and nabbed second, eating away at Hamilton's lead by as much as a second per sector. 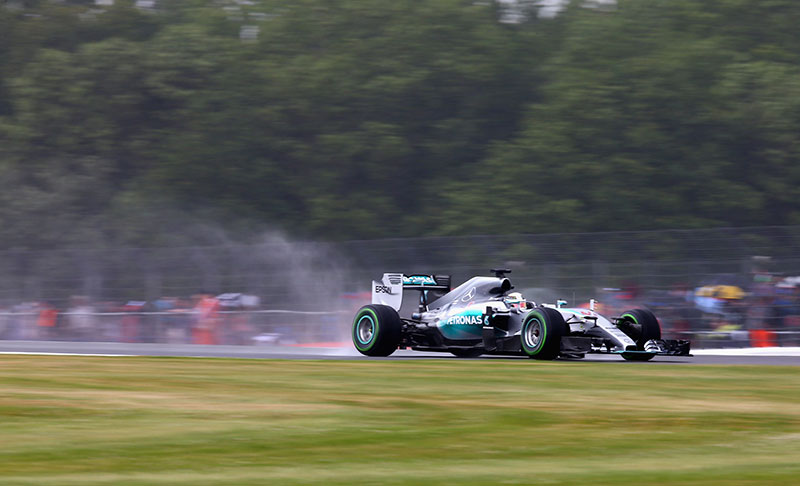 Then came Lap 43. The second part of the rain shower arrived and everyone's radar seemed to be on the wrong setting except for Hamilton's. He made the call to come in for intermediates when everyone thought that was the wrong thing to do. In actuality, it was the move of the race, one Hamilton later referred to as, "The best call of my career." The worst of the rain hit just as he had got his rubber boots up to temperature, and then behind him everyone else had to pit for intermediates while he took off. No one got close to him for the final nine laps and he took the win, and an excellent one at that. Rosberg finished second. 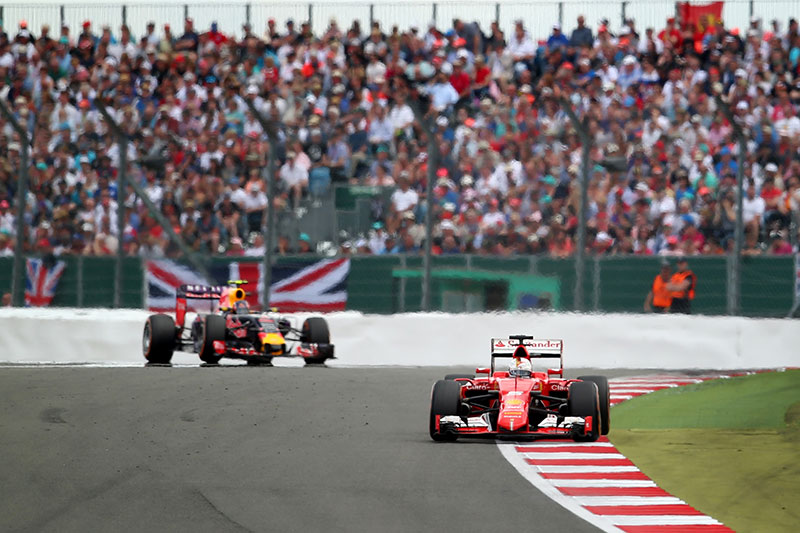 Sebastian Vettel crossed the line in third for the surprise of the day. The Ferrari driver, in fifth place on Lap 42, pitted on Lap 43 behind Hamilton and a lap ahead of the two Williams drivers. Williams stacked both cars in the pits on Lap 44, after they'd spent an extra lap sliding around Silverstone, and when they left pit lane they'd lost the place to Vettel – an extra heaping of shame on top of their calls early in the race, which were never convincingly explained. That put Massa in fourth at the finish, Bottas in fifth.

Sixth went to Daniil Kvyat, the Russian in with a shout for a fight at third place when the rains came, but he spun on his out lap on new, cold intermediate tires. Although he's done a decent job under the hot lights of a first year in one of the sport's top teams, he's not distinguished himself yet. A podium would have done that, but even so, he showed he had the pace in the dry to challenge the Ferraris, something he and Red Bull will be happy about. 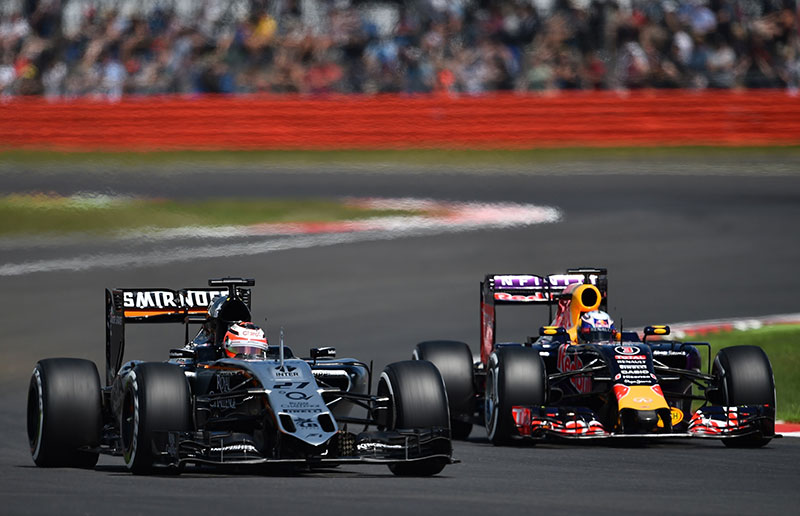 Seventh belonged to Nico Hülkenberg, in sixth just before the rains came. The updated Force India could hold the key to the team's climb up the standings, Sergio Perez coming in ninth. Those eight points earned put space between Force India and the teams behind, and maintained the gap to Red Bull.

In between those two came Kimi Räikkönen in eighth. The Finn made the right call to go to intermediates but he made it four laps too early, on Lap 39, when he was in fifth place. By the time the real showers came, the dry track had chewed up his tires and he had to pit again, dropping him back. 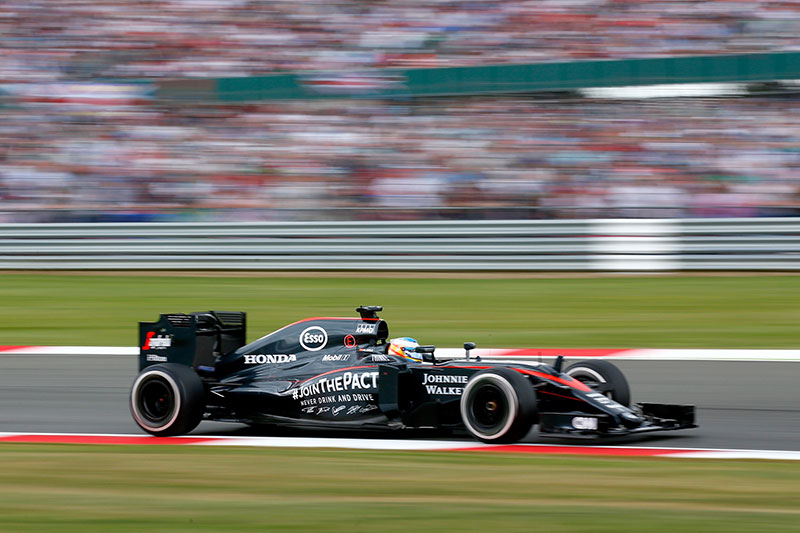 Fernando Alonso in the McLaren took the last points-paying position. Yes, you read that correctly. Seven retirements left 13 cars in the field, and the Honda power unit lasted long enough, forcefully enough, to keep Alonso ahead of two Manor Marussias and a Sauber. That gives the team five points for the year. A year after Ron Dennis said he wouldn't sell branding rights on the car at a discount, this weekend the team admitted that the poor performance this season is hurting their sales pitches. 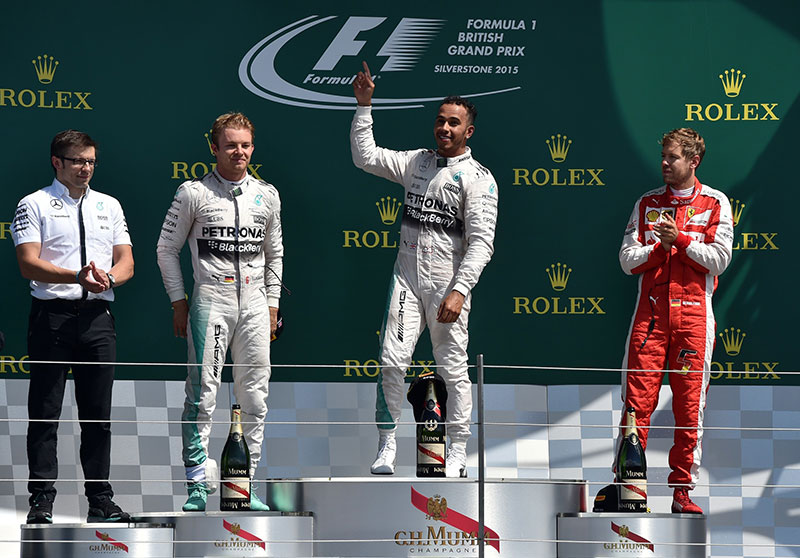 Hamilton's win gives him three British Grand Prix victories, one behind Nigel Mansell and two behind Jim Clark. He also broke Jackie Stewart's 45-year-old record of leading 17 consecutive grand prix, and Mercedes getting two drivers on the podium for the ninth consecutive race tied Ferrari's 62-year-old record from 1953, when Alberto Ascari and Mike Hawhtorne were regulars on the steps. Hamilton puts more padding into his Driver's Championship lead, with 194 points to Rosberg's 177. Vettel is the only other driver in triple digits, with 135. It's the sixth time in this year's nine races that we've seen the same trio on the podium.

In the Constructor's Championship it's more of the same, Mercedes pulling out its gap to 371 points to Ferrari's 211. Even with the snafu's Williams did well for itself, scoring more than Ferrari on the day and getting to 151 points.

With the German Grand Prix cancelled, the next race is in three weeks in Hungary. We'll see you then.