These vehicles are canvases for the art of adding accessories 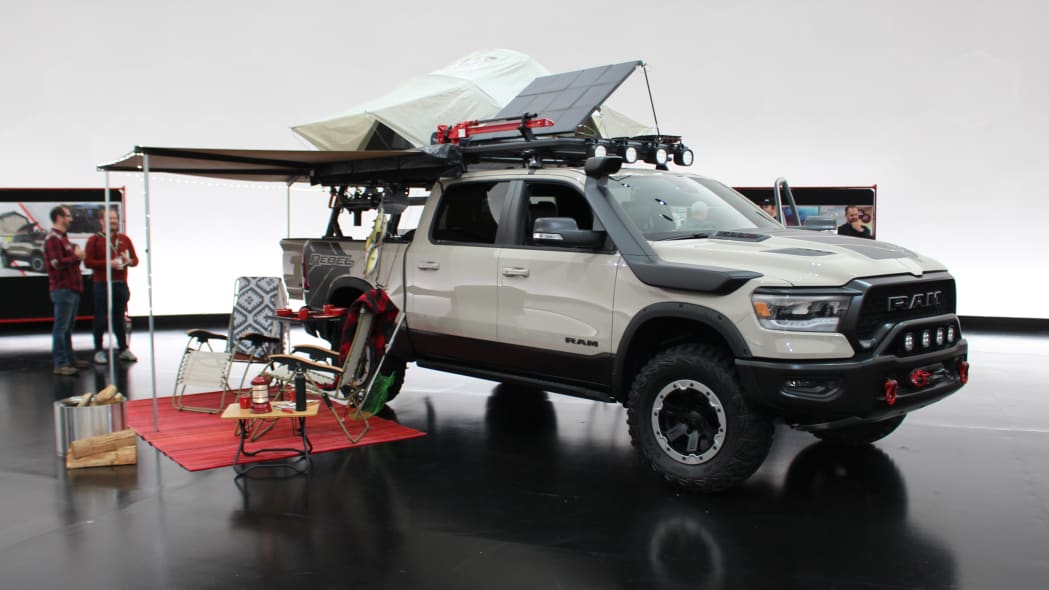 Ram and Jeep both have some heavily customized off-roaders for SEMA this year. The Ram is a 2020 1500 Rebel with the diesel engine and an overlanding theme, and the Jeep is a 2020 Wrangler Unlimited with a general off-road theme. Each features loads of Mopar accessories, and, in the case of the Ram, accessories from other companies. They both have a few parts that haven't made it to market yet.

The Ram 1500 has the suffix of OTG, which stands for off-the-grid. It's designed to be an overlanding vehicle perfect for getting you far away from civilization and still have your needs taken care of. As such, the new EcoDiesel with its strong fuel economy and large amounts of torque is a good engine choice, and the Rebel has plenty of rugged style to begin with. That style is augmented by some special concept Mopar parts such as a high-flow grille complete with flow-through Ram block letters, a la the Chevy "Flow Tie," and steel bumper with a retro-fitted Power Wagon winch. Another concept part is the intake snorkel. Dodge also dug into the existing catalog of Ram parts and added the base Tradesman's vinyl flooring for easy interior cleaning, as well as the Tradesman's rear bumper that doesn't have cut-outs for exhaust. The exhaust was then tucked away behind the bumper, giving the truck a better departure angle.

Many ready-to-purchase accessories have been added to the Ram 1500 OTG, too. From the Mopar catalog comes off-road lights, rock rails, wheels and bolt-on fender flares. The utility rack, basket and tent all came from Yakima. A roof-mounted solar array along with sliding cooking areas and bed-mounted cooler all come from Dometic. A representative from Dodge also showed how the split tailgate can be used as an easily accesible place to have fold out cooking or table space.

While the Ram has parts from all around the aftermarket world, the Jeep Wrangler Unlimited has been outfitted entirely with Mopar parts. And most of those parts are already available, with two exceptions. On one side of the truck, Jeep is showing off some concept mesh covers for its tube-doors. The idea behind them is that they still allow for plenty of air flow, but help keep shrubbery, mud clods and other things from getting in. They're also simple to install or remove, since the slide on and zip up. The other concept parts are also related to the tube-doors, and they're mirror brackets for the tube doors. They were being demonstrated with previous-generation Wrangler mirrors, and simply add side mirrors to the otherwise unadorned doors, providing better rear and blind-spot visibility.

The rest of the truck's upgrades are on sale now. They include the two-inch lift kit with Fox Racing shocks, beadlock-ready wheels, rock rails, steel bumper and off-road lights. The Jeep is also fitted with tube doors, rock rails, a snorkel, Katzkin leather seat upholstery, rubber floor mats and a tailgate table.