Yet another new Ram to love, but without fuel economy estimates, the jury is still out

A good truck gets even better. Impressive comfort and handling for a full-size truck. It also packs the best interior in the segment. Not perfect, but better than the current competition.

DULUTH, Minn. — Ram gave us a new generation of its 1500 pickup for 2019, and we’ve already had a lot of fun with it. We’ve driven the V6 and the Hemi V8 versions. We’ve tried it with and without the eTorque mild hybrid system. We’ve sampled the humble Tradesman, the rambunctious Rebel, the well-rounded Big Horn and Laramie, and the high-lux Limited. But now we get to sample one of the most anticipated updates, this one made for the 2020 Ram 1500 lineup: the third-generation EcoDiesel engine.

With plenty of miles already spent with the new 1500 over the past year, we know the fresh generation of the Ram full-size pickup is already an overachiever. Its interior is class-leading, the ride is surprisingly comfortable, and the 1500’s handling is surprisingly agile for its size. So we’ll focus on the heart of the matter: the new engine, starting out in a Rebel for a cruise around Duluth.

Slated to go on sale later this year as a 2020 model, this is the third generation of the light-duty turbo-diesel engine, and it has undergone a significant  overhaul. The result is that this 3.0-liter V6 provides 260 horsepower at 3,600 rpm and an impressive (not to mention class-leading) 480 pound-feet of peak torque at 1,600 rpm. In addition, the EcoDiesel allows for up to 12,560 pounds of towing, and a 2,040-pound payload.

If we’re keeping score — as we know truck fans are — the Duramax diesel in the 2020 Chevy Silverado and GMC Sierra makes 277 hp (points to GM) and 460 lb-ft, with towing and payload yet to be announced. The Ford F-150 Power Stroke provides 250 hp and 440 lb-ft, with 11,400 pounds towing and 2,020 pounds of payload. Ram hasn’t announced fuel economy yet, so the Duramax’s 23 mpg city and 33 mpg highway are the figures to beat, while the Ford’s gets up to 22 city and 30 highway in 2WD guise. Ram spokespeople wouldn’t budge on providing fuel economy hints, but Ram’s U.S. marketing director Mike Koval promised the EcoDiesel would be “very competitive” here. To be continued … 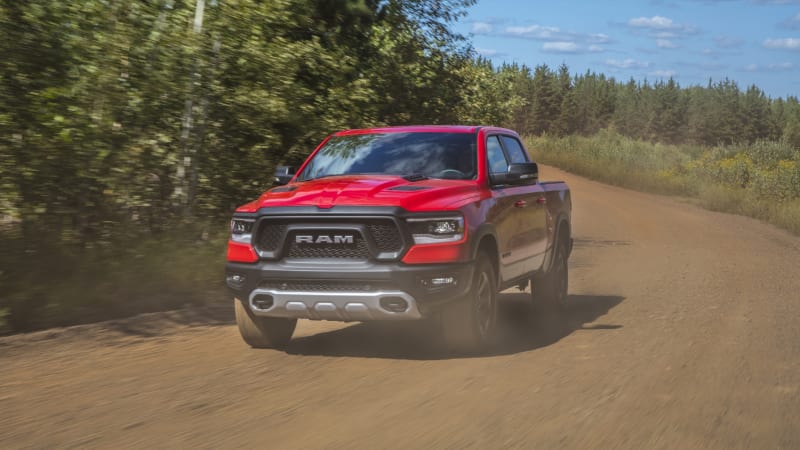 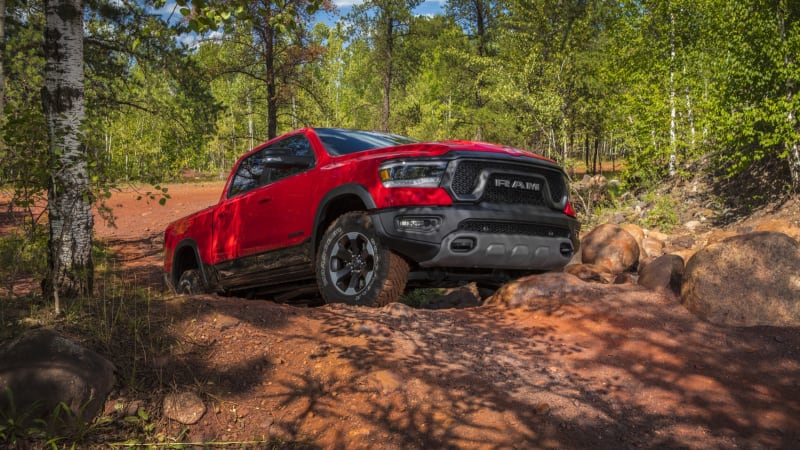 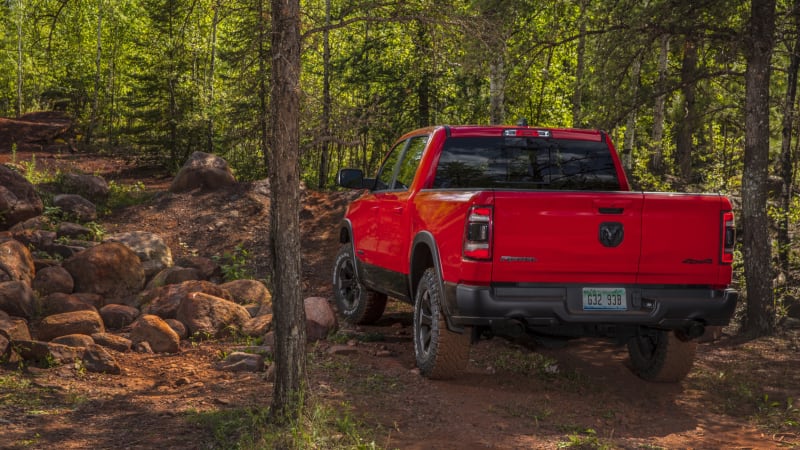 At idle, the EcoDiesel is muted, with a bassy patter typical of a diesel — no surprises there. Sitting still, the truck is very quiet. We made our way through town, and it remained soft-spoken, but for the high, breathy whisper of the turbocharger doing its part — a sound that we enjoyed quite a bit at first, but eventually tuned out. In town, the truck felt responsive off the line, with plenty of low-end grunt but without any annoyingly overeager throttle tip-in.

Accelerating onto the highway as we normally would, the Ram’s eight-speed automatic transmission served up quick, calm but early-feeling shifts (to be expected, on account of the 5,800-rpm redline). Wide-open, the EcoDiesel was still steady, though it started running out of steam higher in the rev range for a brief moment before shifting.

It's frustrating to not have fuel economy figures — official or otherwise. But by watching the 1500’s digital display, we saw an indicated 23.1 mpg average over 60 miles of city roads, expressways, and rural highways – roughly analogous to the competition’s EPA mixed numbers, for whatever that’s worth. We’re confident that figure could've improved with little effort by driving smoother and perhaps less eagerly.

Over the miles, we appreciated the motor’s quiet and confident voice, steady power, easy response and smooth acceleration. While EcoDiesel buyers who aren’t already diesel acolytes will likely buy this out of a careful, personal calculation of capability, price and fuel economy, we found it to provide an attractive refinement proposition. While we previously praised the eTorque motor for the same, the EcoDiesel offers similar graciousness, just in a slightly different way. While the eTorque eases shifts and helps the engine get out of its own way using electric assist, this diesel engine provides smoothness, linearity and quietude.

Speaking of that eTorque, it’s a lot cheaper — by $2,350 when looked at as a standalone option. The eTorque V8 comes pretty close to matching the prowess of the EcoDiesel, too. It has more horsepower, at 395, which makes it pretty darn satisfying to drive, and boasts its own high level of refinement. It tows more than 11,000 pounds, and can outstrip the diesel at 12,750 pounds when equipped just right (4x2 Crew Cab with 6’4” box). If you just love torque, diesel is king by a margin of 70 pound-feet. The EcoDiesel’s fuel economy is the pesky missing piece of the puzzle here, but with diesel prices as high as they are in many parts of the country, it could likely take years of driving to make up the cost differential. 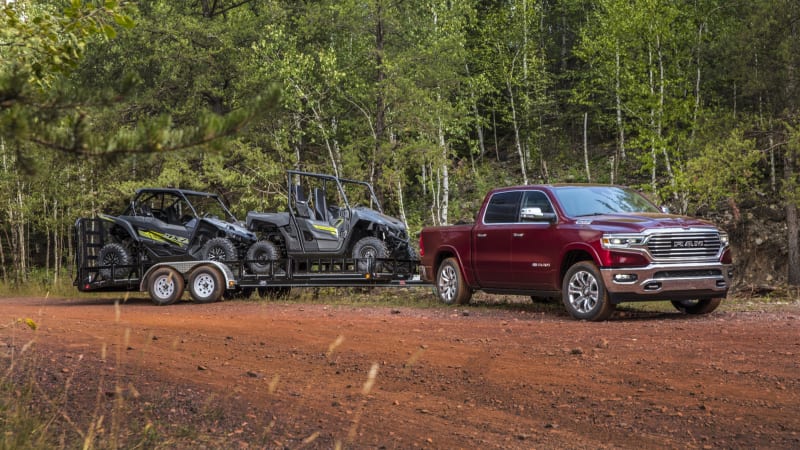 Later, we had the opportunity to get into a Longhorn EcoDiesel hooked up to a trailer loaded with two Yamaha Wolverine X2 side-by-sides – altogether about 4,000 pounds. That’s not even a third of the truck’s maximum towing capacity. And as you’d expect, it didn’t strain the Ram EcoDiesel whatsoever. The truck was definitely slower but far from sluggish, and just as smooth as before. The rest of our brief towing stint was unremarkable, and we’re ready to double or triple the weight and try again the next chance we get.

Back in a Rebel EcoDiesel, we took advantage of some of the park’s off-road trails. We found the EcoDiesel at home creeping up steep hills coated in a red, dusty soil. With the rear locker button poked on, the Rebel pointed its nose at the sky, and was happy to mount the intimidatingly severe grade at a slow creep. Again, it is impressive how smoothly the truck completed what looked like a much more daunting task than it felt. Heading downhill was even simpler with hill descent control on, as it has the ability to hold speeds as low as 0.6 mph, and is adjustable with buttons on the steering wheel.

The book isn’t closed on the third-generation EcoDiesel. In fact, it’s hardly opened. We don’t have fuel economy figures yet, and we won’t until closer to the engine’s Q4 availability. Ram did release pricing for the EcoDiesel models, and announced that it’ll be available on every 1500 trim from Tradesman on up as a $4,995 option. While that’s no small premium, its availability on all trims means you can get into a diesel Ram for as little as $38,585 in the rear-drive Tradesman Quad Cab. It would be considerably more for Ford ($46,255) or Chevy ($42,385), but they’re cost-competitive at similar trim levels. If a (relatively) inexpensive diesel is what you seek, look no further than your Ram dealership.

The EcoDiesel speaks softly but packs a wallop as the aforementioned 480 pound-feet of torque and 12,560 pounds of towing speak for themselves. But more importantly, it provides a comfy, confident drive that's worthy of the very civilized Ram 1500. The lingering question is value. Is the EcoDiesel actually worth the price premium? It is if you fetishize torque (hey, we’re not here to judge), but we can’t make a final call until we know the fuel mileage. We can confirm that the EcoDiesel is a quality component in the overall rosy Ram picture, and diesel purists can’t go wrong here. For the rest of us, well, to be continued …