Tesla Autopilot creates the most confusion of all

One portion of the study involved the IIHS surveying participants about certain unsafe behaviors behind the wheel, given only the name of the driver assistance system. People weren't given the name of the brand for this section, and were instead told to answer the questions about Autopilot (Tesla), Traffic Jam Assist ( Audi and Acura), Super Cruise ( Cadillac), Driving Assistant Plus ( BMW) and ProPilot Assist ( Nissan). The results show that folks misunderstand Tesla's Autopilot far worse than any other driver assistance system on the market. A chart of the results is pasted below. 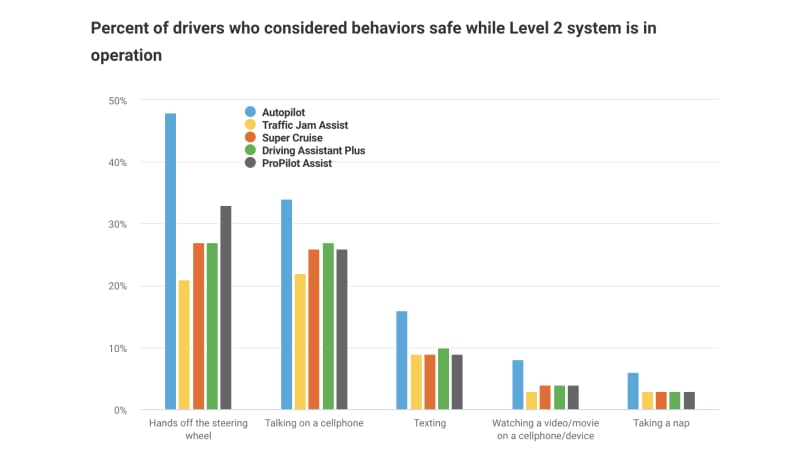 A huge 48 percent of respondents thought it OK to take your hands off the wheel while using Autopilot. Additionally, 6 percent thought it safe to take a nap with Autopilot active. This level of distracted driving is something we've seen time and time again on public roads. Interestingly, only 27 percent of people surveyed think it's alright to take your hands off the wheel using Cadillac's Super Cruise, and that's a hands-free system.

We should be concerned about the numbers for the other driver assistance systems, too. Drivers are confused about the capabilities of current systems, and what a manufacturer calls it appears to be contributing to the confusion.

The IIHS study went further to learn about how people are interpreting instrument cluster data as it pertains to these systems. This portion of the study used a 2017 Mercedes-Benz E-Class. It found a couple different bits of information eluded most of the study's participants. Most people "struggled to understand what was happening when the system didn't detect a vehicle ahead because it was initially beyond the range of detection." Also, many were unable to identify when lane centering was inactive. The IIHS suggested that audible alerts and more obvious visual signals could help improve the understanding of these systems.

Results from another IIHS study were also released today, and this one has to do with where people are using these systems. This study monitored people driving a Range Rover Evoque and Volvo S90 to see where and how often they use adaptive cruise control or the Level 2 Pilot Assist system in the Volvo. These systems are meant to be used on the highway, and are often detailed as such in a vehicle's owner's manual. The study found only a small percentage of driving off the highway was done using these systems, just 7 percent for the Evoque and 11 percent for the S90. Those numbers both rose considerably in highway use, with the Evoque's systems being used 40 percent of the time and the S90's for 28 percent of the time. You can check out the study here for more details if you're interested.