View All Specs
SOUTHERN GREECE – Nearly a decade after the model made its debut, the 2020 Range Rover Evoque still looks audacious and sleek, especially in the compact SUV class where awkward styling and proportions are depressingly prevalent. According to Land Rover design chief Gerry McGovern, the Evoque is the first Land Rover to sell primarily on its styling. So it's not surprising that for the model's redo, McGovern's team wanted to enhance rather than reinvent the look — and that neither the slow-selling two-door coupe nor the oddball Evoque convertible has resurfaced.

All the body panels are new, yet the model is instantly familiar as an Evoque. This despite the opportunity afforded by an all-new platform, Land Rover's so-called Premium Transverse Architecture, which was spurred by the need to accommodate electrified powertrains including an eventual plug-in hybrid (although we're told there are no current plans to sell the PHEV in the U.S.). Look closely, and one sees the evolution in the slimmer headlamp and taillamp units and the flush-mounted door handles borrowed from the Range Rover Velar. The characteristic fast-sloping roofline and rising beltline return, but the overall design further reduces unnecessary decorative elements to a bare minimum.

The model has been a hit for Land Rover globally, selling more than 100,000 units per year, in part because of its urban-friendly size. Buyers did not want to see the vehicle get larger, so while the wheelbase has been stretched by 0.8 inches, its overall footprint hasn't. The additional space between the axles has produced a welcome increase in rear-seat knee room, and redesigned mounts for the front seats allow for a bit more space for backseat passengers to wiggle their toes. A six-foot passenger can fit behind a similarly sized driver, but the Evoque remains less spacious than a BMW X1 or a Volvo XC40. A redesigned rear suspension yields a bit more cargo space, now 21.5 cubic feet behind the rear seats and 50.5 with them folded, which puts the Evoque's cargo hold about on par with the coupe-like BMW X2. 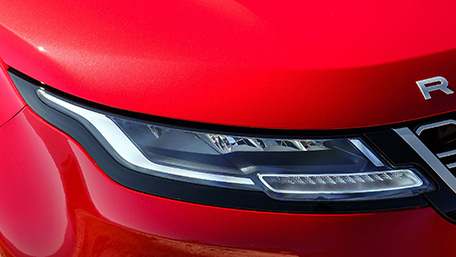 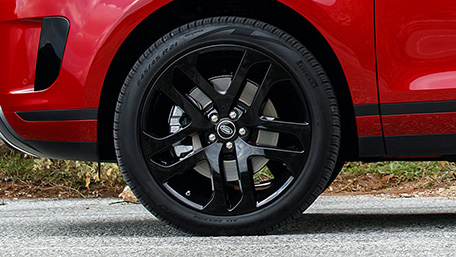 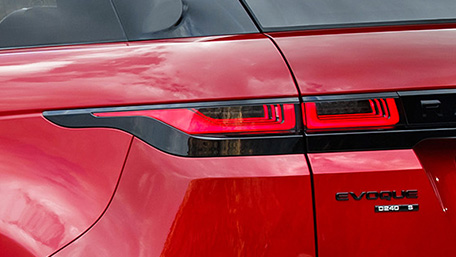 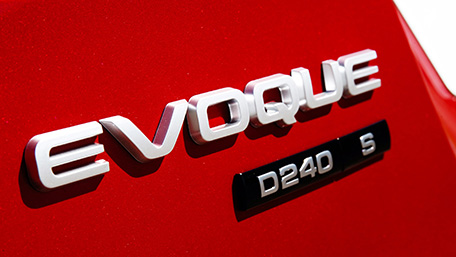 The new Evoque's interior is modern and minimalist. The central touchscreen is similar to that in the Velar, and affords dual functionality with a 60-40 split. Below it, the high-gloss center stack features all touch-sensitive buttons excepting a volume knob, and two large dials that primarily control temperature and fan speed. There are no other physical buttons, knobs, or switches. An available virtual instrument cluster offers an even more screen-based experience. Although sleekly handsome, the minimalism goes a bit too far by banishing the radio tuning knob, and the touch surfaces would benefit from some audible or haptic feedback.

Counteracting the constricted glass area is a dash that angles up and away, making the interior feel less claustrophobic. The instrument panel angles so sharply that the central touchscreen can be electrically tilted to be slightly more upright to make for less glare and an easier reach. The finishes and trim are upscale, with the dash, door panels, and center armrests were well padded even on our base-trim sample car. There's a new Eucalyptus fabric made from recycled plastic bottles, which it is not quite as rich-feeling as leather although it might assuage your green conscience. Leather and a wool-blend fabric are the other two choices. 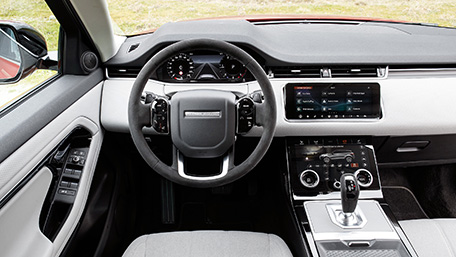 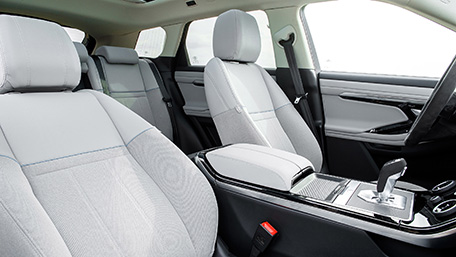 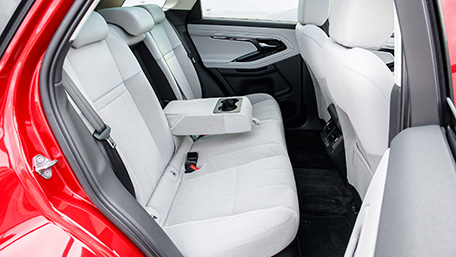 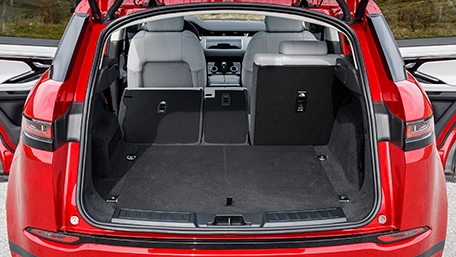 JLR's 2.0-liter turbocharged four-cylinder Ingenium gasoline engine returns in the same two strengths. The "P250" model makes 246 horsepower and 269 pound-feet of torque, and the "P300" makes 296-hp and 295 lb-ft. The names, by the way, derive from the engines' metric horsepower ratings.

The Evoque debuts Land Rover's first 48-volt mild hybrid system. It allows the engine to shut off when braking at speeds below 11 mph, and it smooths engine restarts. The starter/generator recovers energy under braking, which is stored in a 0.2-kWh battery located under the floor. It supplements the powertrain under acceleration but does not increase total horsepower or torque figures. U.S. Evoques will get the hybrid system only with the higher-horsepower P300 engine. Other markets get it with the 246-hp P250 engine, and that is the variant we drove.

With either engine, the transmission is a new nine-speed automatic that replaces the previous nine-speed. The new gearbox has the same ratios but sportier shift mapping that is less insistent on selecting the highest possible gear. That means calls for acceleration from the 246-hp turbo four are answered more readily without a long wind-up waiting for a multi-gear downshift and a slow-spooling turbo. The P250 feels adequately spry in around-town driving, it was only at highway speeds that we might have wished for the greater muscle of the P300. In all cases, the 2.0-liter's engine note is muted, and we found the Evoque to be a hushed freeway cruiser even at 80 mph or better. In city driving, the hybrid system effectively eliminated the annoying vibration from engine restarts. 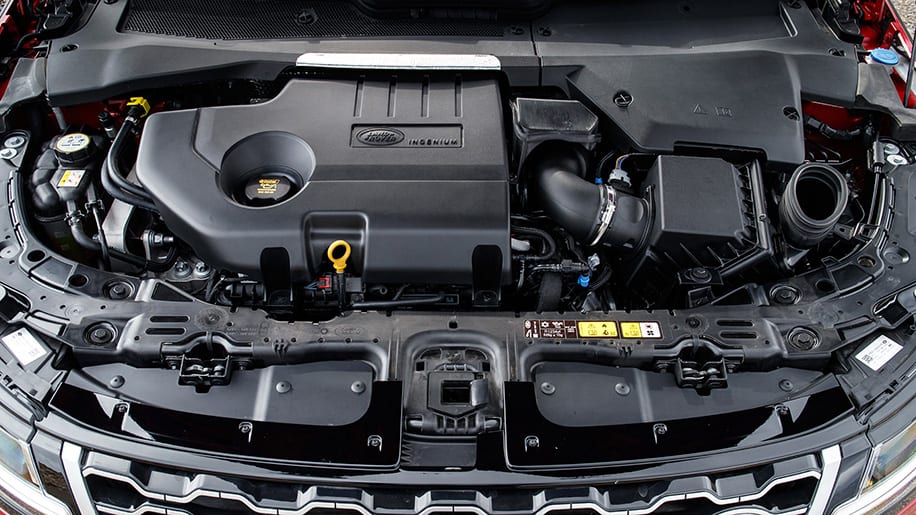 All-wheel drive is again standard but is newly able to disconnect the rear wheels to increase efficiency. Despite that innovation, EPA numbers for both the 246-hp version and the hybridized 296-hp model are down compared to the outgoing car. The P250 checks in at 20 mpg city and 27 highway (losing 1 mpg city and 2 mpg highway), while estimates for the higher-output engine are 21 mpg city and 26 highway (off by 1 mpg city and 3 mpg highway). We're told to blame the more responsive new transmission, and we wouldn't trade away the improvement in drivability. We do note, however, that the Evoque's EPA numbers fall shy of most competitors' including those of its stablemate, the Jaguar E-Pace, which uses the same two engines but without the hybrid assist system, and achieves up to 21 city and 28 highway mpg.

All Evoques use struts up front and a multilink rear setup, which has been retuned for improved ride comfort, with softer spring rates front and rear. The suspension capably dispatched with the modest potholes we encountered despite 20-inch rolling stock (18-, 20-, and 21-inch wheels are available). Pushing hard through winding corners in the rocky hills of Greece, the Evoque exhibited fairly resolute understeer and modest but not objectionable body roll, and over high-speed dips there were a bit more body motions than we would have liked.

Optional adaptive dampers — which in the U.S. are reserved for the P300 but were in one of the Euro-spec cars we drove — in their available Dynamic mode firm up the suspension nicely. Happily, the firmer setting doesn't materially diminish the ride. The Dynamic mode also alters the steering (although we were quite happy with the nicely weighted standard setting), the transmission programming, and throttle mapping — the driver can select which systems are affected. Consider the adaptive dampers a must-have, although even with them the Evoque is not as athletic as the E-Pace. 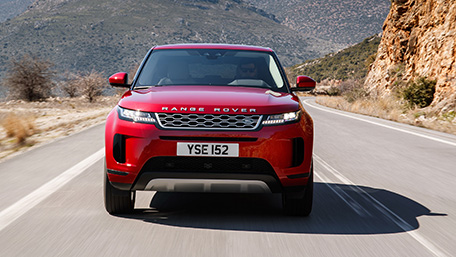 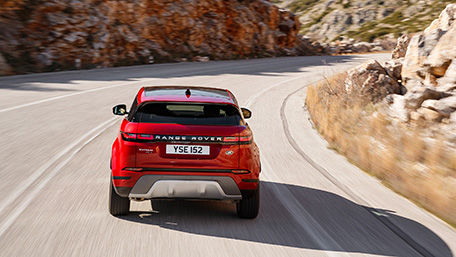 The Evoque's sloping roofline and high beltline made for blinkered rear vision in the outgoing model — or, as McGovern concedes, "that tiny window at the back that you can't bloody see out of." The new version gets around that situation by offering what Land Rover calls its ClearSight Rear View Mirror, which can be switched from a standard inside mirror to an HD screen that displays the feed from a rear-mounted camera. The camera offers a wider, 50-degree field of view but on our sunny-day drive, we were bothered by reflections on the glass that competed with the electronic image. That may be less of a problem on overcast days or at night.

Additional cameras, one mounted in the grille and two in the side mirrors, comprise the available ClearSight Ground View system, which stitch together a view of what is immediately in front of the car, as if the front sheetmetal were see-through. The Ground View feature might be most useful for wheel placement in challenging off-road driving but it also has value in the urban jungle when nosing into parking spaces with high curbs. Additional camera angles that can be summoned include a top-down view alongside the car to avoid curbing those stylish wheels, a forward view of cross traffic, and the standard backup camera. The phalanx of cameras is a welcome driver's aid in crowded urban environs.

As a Land Rover, the Evoque can't just be at home in the city, and indeed the Evoque is arguably the most off-road-capable vehicle in its class. Its 8.3 inches of ground clearance and steep approach and departure angles are buttressed by familiar off-road technologies including All-Terrain Progress Control (essentially ultra-low-speed cruise control), Hill Descent control, and a newly enhanced Gradient Release Control. When stopping on a steep ascent, this hill-hold feature will keep the brakes engaged even after the pedal is released until the driver steps on the accelerator — previously the system could hold the car for three seconds, now there is no time limit. It also can function as an auto-hold system in stop-and-go traffic, if the driver so chooses. Land Rover's all-wheel-drive system, now can automatically choose the ideal drive program — or the driver can manually select from General, Eco, Sand, Grass/Gravel/Snow, and Mud/Ruts. 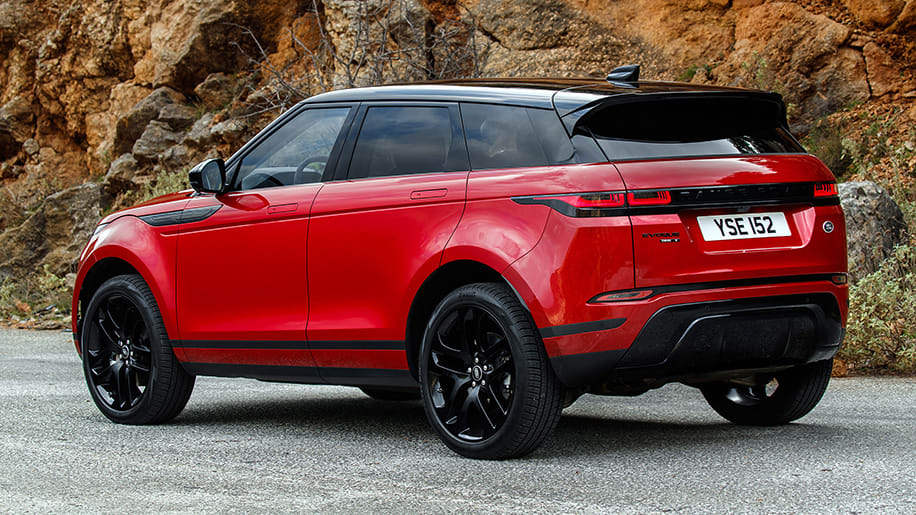 The Evoque's wading depth has been increased to 23.6 inches, a situation it seems unlikely to encounter, but with rising seas levels, who knows? Still, that begs the question: Are you really going to step out of the vehicle to poke a yardstick into two feet of water to check its depth? Technology comes to the rescue in the form of ultrasonic sensors in the side mirrors that can measure the depth of the water and display it on the central screen. Sounds neat, but it was not on the cars we drove, although we still managed to drive through a few streams even without it.

As ever, a Range Rover is not inexpensive. But the model also hews to the brand character with its unmatched off-road ability, sleekly urbane design, and rich interiors. The Evoque proved that the Range Rover idea can translate to size Small. New tech and a more polished driving experience help the 2020 model do so even better.