2018 Buick Regal TourX vs. wagon competitors: How it compares on paper

Joel Stocksdale
To the great joy of auto enthusiasts nationwide, wagons are back! Well, at least there's a few more of them. The latest is the 2018 Buick Regal TourX, which we just had our first drive of and found to actually be quite good with pleasant handling, solid power and plenty of space.

But, how does the TourX compare to other cladded wagons? Well, let's dive into the specs and fire up the ol' spreadsheet maker for Buick Regal TourX vs Subaru Outback vs Audi A4 Allroad vs VW Alltrack vs Volvo V60 Cross Country. True, some are from mainstream brands and others are from luxury marques, but Buick straddles both realms, so it's appropriate to look at them all.

Of course, there's more to these cars than just the numbers, but they're still important, and in the case of this class of crossover-aping wagons, can vary more than you'd expect. So check out the specs in the chart below, which are followed by more analysis and photos of each.

Discover and compare other wagons and crossovers with our Car Finder and Compare tools. 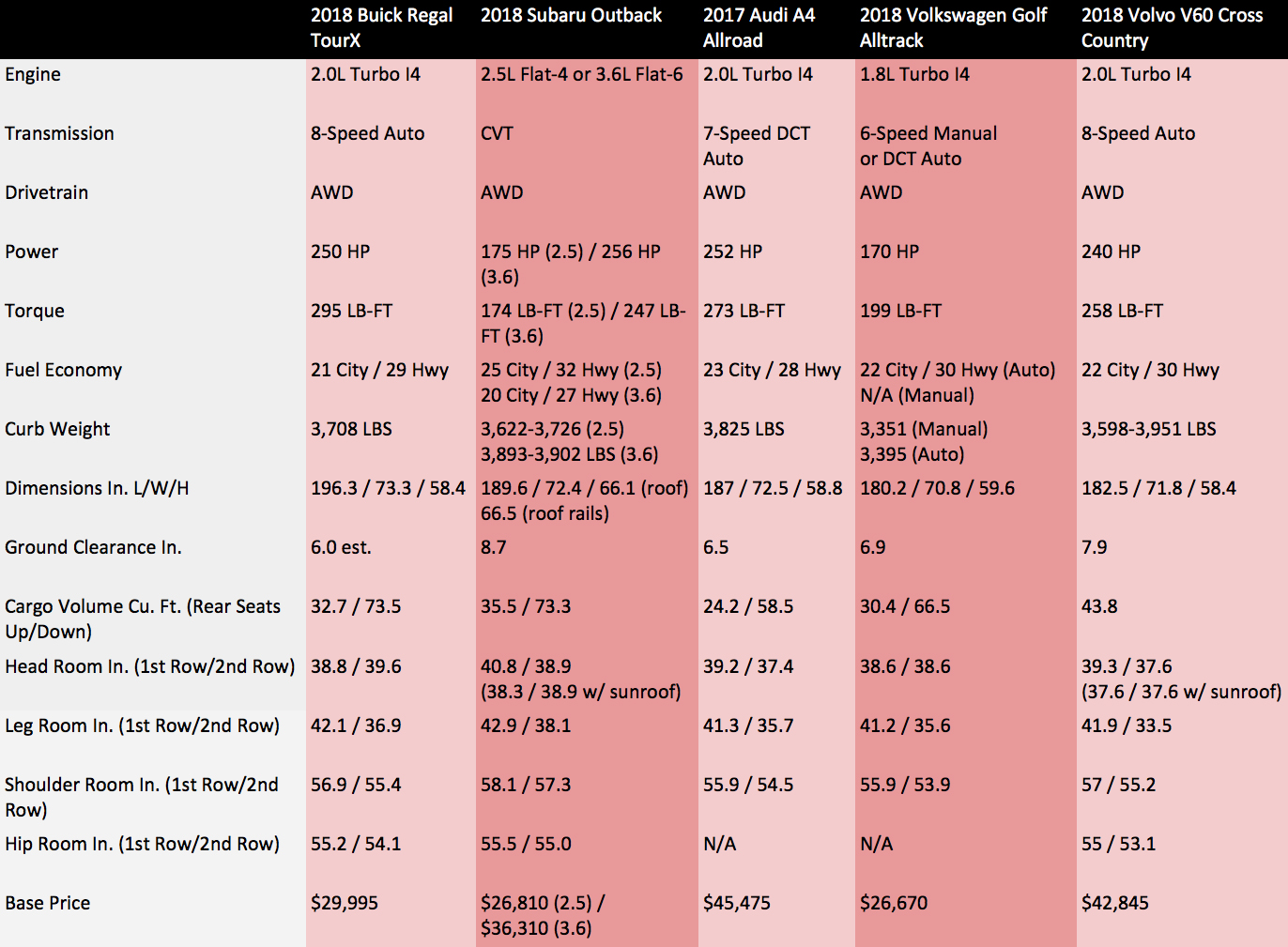 When comparing powertrains, the Buick is far-and-away the winner as far as torque is concerned, and is in a nearly three-way tie for horsepower. Its 295 pound-feet of torque is 22 lb-ft more twist than the next-most-grunty Audi A4 Allroad. And in regards to power, the Buick's 250-horsepower engine is only down 6 hp to the most-powerful Subaru and its optional naturally aspirated flat-six, and just 2 hp less than the Audi. At the bottom of the pack is the Subaru Outback with the standard naturally aspirated flat-four, which only makes 174 hp and 174 lb-ft of torque. That may not seem too bad compared with the VW Golf Alltrack, which only makes 170 hp and 199 lb-ft of torque, but the VW is much lighter by between 200 and 300 pounds.

Transmission-wise, there's quite a bit of variation in the group. The Regal TourX and the Volvo V60 Cross Country rely on eight-speed automatics, all Outbacks use CVTs, and the Alltrack and Allroad have dual-clutch automated manual transmissions with six and seven gears, respectively. But for people that want to shift for themselves, the only option is the Volkswagen, which offers a traditional six-speed manual transmission on the Golf Alltrack.

One of the main reasons to buy a wagon is for the body style's large cargo capacity. And for the most space for things and stuff, you'll want to check out the Subaru and the Buick. The Subaru's 35.5 cubic feet behind the rear seats wins that category, beating out the Buick's still-impressive 32.7. The two switch places when the rear seats are folded, with the Buick's 73.5 cubic feet narrowly overcoming the Subaru's 73.3. The least amount of cargo space is found in the Audi A4 Allroad and Volvo V60 Cross Country. The Volvo has the least amount of maximum space at 43.8 cubic feet. Because Volvo doesn't list the smaller volume, we're left handing that demerit to the Audi with just 24.2 cubes behind the rear seats (though having seen both side-by-side, the Volvo is almost certainly the real loser here). At least Audi furnishes the smallish cargo area with a standard cargo net/divider, that allows you to more safely load things to the roof without fear of them flying forward (it's good for dogs, too).

When throwing people into the mix, the wagons are all fairly close, but the Subaru generally has more space for heads, legs and shoulders. Another interesting note, although the Volkswagen is by far the smallest vehicle of the group on the outside, its cargo space is square in the middle.

There isn't a lot of variation in fuel economy among these cars. The most frugal of the bunch is the 2.5-liter Subaru Outback. It gets 25 mpg in the city and 32 on the highway. Close behind are the VW and Volvo, which get identical economy of 22 city and 30 highway. Funny enough, the least fuel efficient is also the Subaru Outback, but with the 3.6-liter flat-six. It only gets 20 mpg city and 27 highway.

The big variation in cost comes with pricing. The two cheapest cars are the four-cylinder Subaru Outback and the VW Alltrack, both starting at just under $27,000. So for those on a budget, the combination of low price and good fuel economy in these wagons make them highly appealing. Following those two is the Buick Regal TourX at $29,995, which makes for a strong all-'rounder with plenty of power, solid fuel economy, and loads of space. The six-cylinder Outback is next with similar power to the Regal, but worse gas mileage and the higher starting price of over $36,000. That being said, the sub-$30,000 Regal is very basic, so many will probably be priced closer to the Subaru. The Audi and Volvo are quite pricey, with the Volvo starting at just under $43,000, and the Audi starting at a group high of nearly $45,500 (a loaded Regal is thousands less than that). These are certainly the cars for people who want a prestigious badge, and at least in the case of the Audi, a luxurious place to rack up the miles.