Lexus jumps head first into turbocharging with its 2015 NX 200t

An In-Depth Look At The Lexus Of Turbocharged Engines

If Lexus is going to stay competitive, it needs to turbocharge sooner rather than later.

If there's anything that Lexus is experienced with, thanks in large part to its corporate parents at Toyota, it's hybrid powertrains. The automaker has hybridized tiny little four-cylinder engines, massive honkin' V8s and everything in between. So synonymous are hybrids and Lexus that it would be a shock to see a brand-new model released without an accompanying version with blue badging and a little "h" appendage to its name.

What Lexus is not known for, on the other hand, is turbocharging. Once a domain populated largely by smaller, higher-end niche European purveyors like Saab and Volvo, all realms of the automotive sphere are now turning to downsized engines with power levels restored through the use of forced induction. If Lexus is going to stay competitive with the likes of Audi, BMW and Mercedes-Benz, not to mention maintain a lead over less enthusiast-oriented rivals like Lincoln and Buick, it's going to need to incorporate turbochargers sooner rather than later.

And that brings us to the 2015 Lexus NX 200t. As the marque's first foray into gasoline turbocharging, the NX and its 2.0-liter turbocharged four-cylinder engine mark a turning of the tides at Lexus that we the media, automobile shoppers and competitors alike will be watching with keen attention. Keep reading below for more on this pivotal engine and some firsthand impressions of its performance. 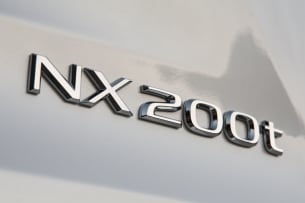 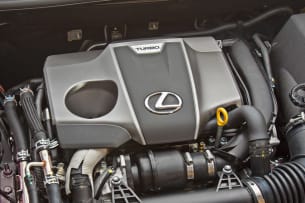 We'd be shocked if this new powerplant doesn't make its way into more products from the Lexus empire.

Let's talk specs. At its heart, the 8AR-FTS 2.0-liter twin-scroll turbocharged inline four-cylinder engine was designed with square 3.4-inch bore and stroke figures, a 10.0: 1 compression ratio and as much as 17 pounds of boost from a new turbocharger designed in-house by Toyota. There's a balance shaft to quell harshness and vibration, operated by resin gears. A maximum of 235 horsepower is produced between 4,800 and 5,600 rpm. Torque comes in at a relatively healthy 258 pound-feet between 1,650 and 4,000 rpm. Premium gasoline is required, and in the NX-shaped crossover wrapper it debuts in, Lexus estimates the mill will return 22 miles per gallon in the city, 28 on the highway and 24 combined (drop one city mpg if equipped with all-wheel drive) with a six-speed automatic transmission.

Lexus has baked quite a bit of new-think technology into its first turbo engine, starting with the cylinder head, which boasts water cooling and is combined with an integrated four-into-two exhaust manifold to bring the turbocharger as close to the intake induction system as possible and to split the engine's exhaust into pairs that feed into the twin-scroll turbo. Similarly, the liquid-cooled intercooler is an integral part of the engine. Finally, a variable wastegate valve improves efficiency.

We find it telling that Lexus chose to develop and manufacture a brand-new turbocharger itself, instead of sourcing one from any of the well-known suppliers like Honeywell, BorgWarner or Mitsubishi. If the automaker was less than serious about turbo technology, wouldn't it be more likely to outsource the component? We'd be shocked if we didn't see this new powerplant make its way into more products from the Toyota/Lexus empire, likely starting with the well-received IS sedan. 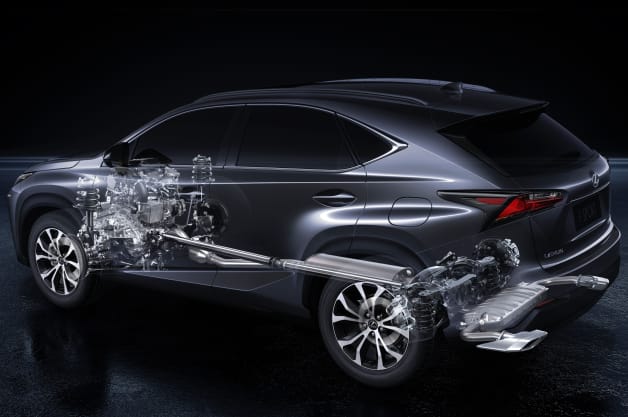 As is the case with many other Lexus and Toyota products, the 2.0 turbo mill features the company's so-called D-4S system that uses both direct and port fuel injection. The automaker claims that offering both high- and low-pressure injection results in optimal efficiency at all engine speeds.

VVT-iW technology is new for this engine, the added W indicating a wider range of intake cam timing control. This allows the timing to be advanced or retarded as required, and it means the engine can run in both Otto and Atkinson cycles, switching as needed in an instant. This is pretty interesting tech, and the best news is that it all takes place seamlessly and isn't noticed by the driver in any way – there's no off-putting engine note changes or anything else fishy to make the driver aware that the engine is saving fuel whenever possible.

In the 2015 NX 200t, the 2.0-liter turbo engine performs quite well, garnering a claimed 0-60 mile-per-hour run of 7.0 seconds with all-wheel drive. We're somewhat surprised that the AWD model is 0.2 seconds quicker to 60 than its front-drive sibling, as we never noted enough low-end torque to break traction. We confirmed with Lexus that gearing is identical for both the U661E (FWD) and U661F (AWD) transmissions, though the F Sport gets a numerically higher final-drive ratio for a bit more responsiveness from a dead stop. There must be some barely-there wheel spin that isn't obvious to the driver, but that's a good thing, as that means the electronic brains are all working properly and are most likely smarter than we are. 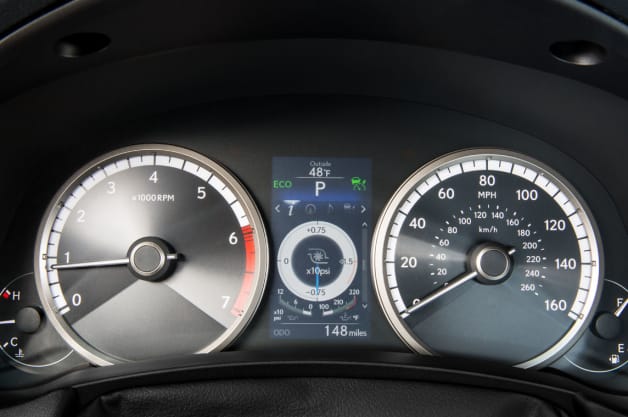 We're comparing the Lexus turbo against the base engine offerings from its most natural rivals.

In practice, the engine needs time to spin into its mid-range powerband before it feels particularly powerful, at least as equipped in the NX. Part of this, we think, is due to the six-speed automatic transmission. A greater spread of gears would seemingly allow Lexus to employ a numerically higher final gear ratio, thereby increasing the impression of torque when the driver calls on the full herd of stampeding ponies when the light turns green. Of course, adding gears also adds complexity and can introduce other drivability nitpicks, such as gear hunting at mid-range speeds, and Lexus tells us that it chose six gears on purpose and not just because that's what it had available. Even so, we'd be surprised if it didn't have a transmission with more speeds in its showroom soon. In any case, there's a good amount of power available once the engine is spinning at a few thousand rpm, and the NX is plenty quick enough on its feet for any situation it's likely to encounter in normal driving conditions.

It's important to note that the new 2.0 turbo is the only non-hybrid powerplant on the NX menu, which leaves the compact CUV unable to offer much competition to its six-cylinder competitors ( Acura, Audi, BMW, Mercedes, Volvo...) or even to the new 2.3-liter EcoBoost Lincoln MKC. When discussing like-to-like engine output numbers, we're comparing the Lexus against the base engine offerings from its most natural rivals. Just how many buyers Lexus is potentially missing out on, we don't know, but it's probably a small percentage. 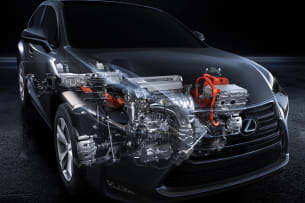 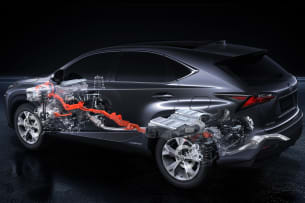 All motive force to the rear wheels comes courtesy of a unique electric motor.

While we're dissecting the new 2015 Lexus NX, a few salient tidbits from the hybrid powertrain in the NX 300h bear mentioning. The 2.5-liter Atkinson-cycle four-cylinder engine and main hybrid drive componentry is shared with models like the Lexus ES 300h, not to mention the Camry and Avalon hybrids from Toyota. But it differs in many key details, particularly due to the inclusion of all-wheel drive capability provided by the Q211 rear transaxle.

There are two motor/generator units that join in making the hybrid powertrain work in front-drive NX hybrids, as is the case in the ES hybrid. The Q211 rear transaxle adds a third motor/generator unit along with its own reduction drive mechanism to selectively power the rear wheels as needed. There is no direct mechanical connection between the front-mounted engine and the rear wheels; all motive force to the rear wheels comes courtesy of this unique electric motor. The NX is the first such all-wheel-drive hybrid vehicle from Lexus or Toyota, but again, we doubt it will be the last.

We'll have a full First Drive report coming up later today, where we'll discuss our full thoughts on the NX and our driving impressions. For now, know that a lot of unique engineering went into this first compact crossover from Lexus, and know that it all works very well indeed.