Jeff Sabatini
Owners of 2005-2007 Chevrolet Trailblazer, GMC Envoy, Buick Rainier and Saab 9-7X SUV models with faulty gas gauges now have some recourse. According to a report in The Detroit News, General Motors will cover half the repair costs for select vehicles with malfunctioning fuel level sensors. According to a GM spokesman, that should mean paying less than $200 for the fix, provided the SUV in question has less than 120,000 miles on the clock.

GM's offer stems from a National Highway Traffic Safety Administration investigation that was launched in April, after GM and NHTSA received thousands of complaints of gauge failure. According to the report, nearly 300,000 vehicles may experience premature wear on the fuel level sensor contacts. This can lead to incorrect fuel level readings, especially after filling the tank, when the gauge may still show empty. But it can also result in the gas gauge showing more fuel than is actually in the tank, leading to the inevitable running out of gas and engine stalling. A total of 867,337 vehicles were included in the investigation.

GM issued a service bulletin to dealers in August, as well as a notification to owners. So if your Trailblazer is running on empty, you might want to check your mailbox and start looking for change under the seats. 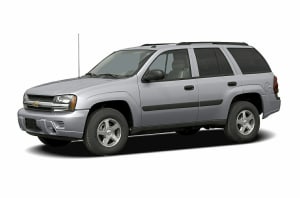