F Sport adds a smidge of sport to this small crossover The Lexus UX is a boldly-styled small crossover with impressively smooth and quiet road manners though it's low on power compared with other crossovers, and rear-seat and cargo space is a bit tight. The hybrid offers more power and impressive fuel economy.

The 2020 Lexus UX 200 is moving into its second year on the market, and we decided it was time to take a spin in the F Sport model. Similar to other F Sport models from Lexus, this one amps up the handling and styling, but retains the same powertrain as the base vehicle. That means we’re working with a naturally aspirated 2.0-liter four-cylinder engine making 169 horsepower and 151 pound-feet of torque, which is then paired with a CVT. With a 3,307-pound curb weight, this Lexus crossover/hatchback isn’t going to win many drag races in this segment. Lexus tried to improve the driving dynamics in other ways, though.

F Sport models get revised springs and more aggressive stabilizer bars in an effort to reduce roll and improve handling. Lexus says the 18-inch F Sport alloys are more rigid than the standard wheels, also aiding in the handling department. If sound is your thing, the F Sport also uses something called Active Sound Control that simulates the sound of up- and down-shifts. You know, since the UX is only available with a CVT. Both the grille and front bumper design are F Sport exclusive fittings. Same goes for the rear bumper and rear moldings, further separating itself from the regular UX 200. There are even more sporty touches on the interior. Lexus installs high bolstered sport seats it says were originally designed for full-on F models. Paddle shifters are placed behind the leather-wrapped steering wheel, too, allowing you to toggle through the simulated gear ratios. Aluminum pedals, scuff plates and an aluminum footrest all try and convince you that you’re in something sporty.

Since the UX is the smallest of Lexus crossovers, it’s also priced at the bottom of the Lexus barrel. Our F Sport model started at $35,025 after the $1,025 destination charge, but a few options brought the final price to $41,285. The most expensive of the extras was the upgraded 10.3-inch infotainment system with navigation and premium audio for $2,200. Ours also had the F Sport Premium package that added a moonroof, rain-sensing wipers and heated front seats. The head-up display was an extra $500; a power rear tailgate was $600, and the blind spot monitoring system added another $500. A few other accessories and cheaper options brought us to our over-$40,000 total.

Editor-in-Chief Greg Migliore: The UX is the style play in this segment. It’s certainly bolder than Jaguar, Audi, Mercedes, BMW and other small crossovers. The segment itself is red hot, and with its creased styling and prominent spindle grille, the UX makes the biggest statement. It’s also arguably the most polarizing. The X2, which almost looks slammed, is nearly as edgy, but the rest of the field gets generic fast. Automakers do need to make their small crossovers look premium, otherwise they’re just charging a lot of money for slightly lifted hatchbacks. In this sense, Lexus succeeds, and its design language translates to the smaller packaging. Indeed, I think the UX looks better than some of its larger brethren. The lines are accentuated, and the wheels really pop. It all creates a bit of a concept-car vibe.

Looks aside, the UX is mediocre. The hybrid version is actually fun to drive – the electric element gives the drive character juice – while the gasoline-only motor paired with a CVT is middling at best in the UX 200 model. The interior is so-so. I like sharp design on the outside, but inside it feels a little severe in such close quarters. I'm not a fan of the Lexus touchpad, nor do I like the infotainment interfaces. So yes, Lexus wins in the exterior design department, but the rest of the UX is just OK at best.

Associate Editor Byron Hurd: Saying I have a love-hate relationship with the UX is an overstatement at both ends of the spectrum. I don't actually feel strongly enough about this car one way or the other, and that's not praise.

The UX is much more interesting than the Toyota C-HR. I'll give it that. It's attractive and (in the burnt orange finish on our test car) even eye-catching. It also has nice seats, offering decent support and surprisingly prominent bolsters and high-quality surface materials.

This is where I start to think about another compact Lexus with good seats that just didn't deliver as a total package. Remember the CT hybrid? Of course you do. It was basically a Prius hatchback with a Lexus interior. Sound familiar?

Strangely, as Greg mentioned above, the hybrid part of that formula is maybe the most redeeming component of the UX. Sadly, the F-Sport model is not a hybrid, and the hybrid is the only way to get all-wheel drive.

What we're left with here is a buzzy little engine mated to a CVT, which manages to convert gasoline into noise at a very frugal ratio, but that's about it. The UX handles well, and the ride quality is decent on good surfaces, but on rougher roads, this little crossover starts to feel like a puppy that hasn't quite grown into its enormous feet.

Associate Editor Joel Stocksdale: My feelings toward the Lexus UX are a bit more "love" than Byron. The styling is quite good. It's well proportioned and has excellent design details, particularly that full-width taillight that curves up and away from the body at each end. It really just looks like a sporty hatchback with fender flares rather than an actual crossover, and that's a good thing in my book. Even the interior is stylish with its sliding instrument ring, angular dashboard, patterned speaker covers and piano key toggles.

But the UX's chassis is what really gets me. It strikes an excellent balance between handling and ride quality. It's soft and supple over bumps, but avoids body lean and turns in confidently and quickly. The steering doesn't offer much feedback, but it has a great heft. It's a surprisingly enjoyable car to drive.

But as the others have said, you really must get the hybrid version. It's about a $2,000 upcharge, but it gives you so much more. The rear motor gives you all-wheel drive and an extra 12 horsepower. It doesn't sound like much, but the torque from that motor makes it feel much quicker. And if you're feeling silly, you can turn the traction control off and get the back end to kick out a bit. More practically, the hybrid also bumps your fuel economy from 29 city and 37 highway to 41 city and 38 highway. Oh, and the hybrid makes the whole car more quiet and refined, since it isn't leaning as heavily on the gas engine.

Senior Editor, Green, John Beltz Snyder: I feel like every Lexus I get in has a different interface for its infotainment. This one has the trackpad touch deal to make selections — which is familiar enough at this point — but it also has buttons built onto a piece of the center console behind it: As you can see, that's also where the scroll wheels for volume and tuning are. It's kind of clever, and seems like it could be handy once you get used to it. The problem for me was that I could never get accustomed to it. I'd have to keep one hand on it to know which button I'd be pressing. Of course, I didn't dedicate a hand to it, so every time I went to use one of the functions, I'd have to grope around until I finally conceded to taking my eyes off the wheel to hunt for the proper button.

Keeping my eyes on the road, though, was the helpful head-up display. It's a good one, showing useful information in a clear and colorful way. That, paired with the driver assist systems, makes this an easy car to live in heavy traffic. In all, the tech in this UX is a mix of good/straightforward and creative-but-clumsy. 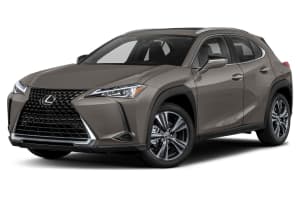