Compact crossovers are a license to print money, and the 2018 Toyota C-HR will no doubt benefit from that trend. It was originally meant to be Scion's savior, but then Scion folded, and this failed date with destiny sets the C-HR apart from other Toyota crossovers. It comes in two trims with zero available options and, most notably for a crossover, no all-wheel drive. Not since the introduction of the Nissan Juke nearly seven years ago has a compact placed such an emphasis on styling over customization and usability, but even the Juke can send power to all four wheels. Some will see it as a compromise, others won't care.

Most Scions were mono-spec vehicles, leaving a buyer to choose an exterior color and a transmission. Sure, dealers offered a number of optional accessories like lights, wheels, and body kits, but it was all just toppings. Likewise, choices on the C-HR are limited to paint color and trim. No all-wheel drive, no manual transmission, and a black interior. 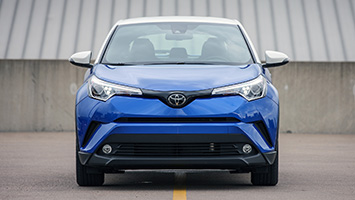 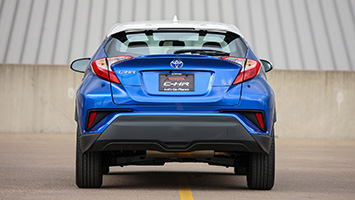 The C-HR comes in two trims, XLE and XLE Premium. What you see is what you get, and both trims come fairly well equipped. Standard features on the $23,460 XLE include a leather-wrapped steering wheel, a rearview camera, dual-zone climate control, and a touchscreen audio system with USB and Bluetooth. The $25,310 XLE Premium adds power lumbar for the driver, heated front seats, and keyless entry and ignition.

The C-HR's biggest selling point is arguably the inclusion of the Toyota Safety Sense P (TSS-P) active-safety suite on all models. No other vehicle in this class comes standard with the same level of safety tech. The two main features of TSS-P are collision mitigation with active braking and full-speed radar cruise control.

TSS-P works well enough, though it isn't perfect. The radar cruise is conservative and the lane departure didn't always notice when a tire or two drifted across the line. For obvious reasons, we didn't test the automatic emergency braking; the system will provide audible and visual notifications before taking control if it senses an impending accident. Blind-spot monitoring and rear cross-traffic alert are only available on the XLE Premium. Similar systems cost thousands to add, even on mid-tier luxury cars. 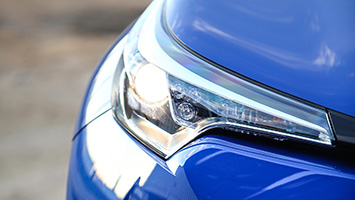 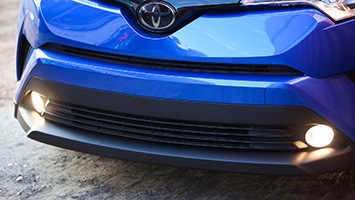 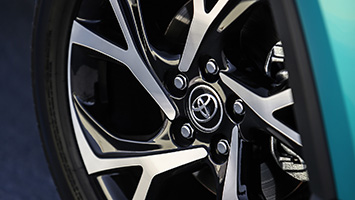 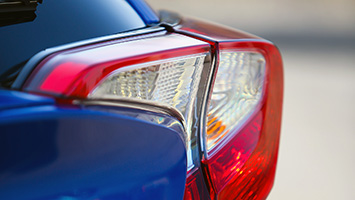 The C-HR - or Coupe High-Rider in Toyotaspeak - has some styling elements sure to turn off some customers. Toyota seems okay with that, as it wanted to bring the C-HR concept's striking looks to the road. It mostly works, with only the tacked-on, RAV4-esque front end spoiling the overall balance. From the profile, the C-HR has a severe underbite – it just doesn't match. The lower front fascia also negates any pretense of off-road prowess the C-HR might have had. But so does its front-drive-only nature.

The rest of the design looks rather chic. A sharp and distinct character line carries over the headlights, down behind the front wheel, and up through the tail light. Another cuts just below the windows, making the doors tight and muscular. It's as distinct in person as it is in photos, creating deep shadows as the lines shape and bend the light. While those lines may be unique, much of the rest feels old-hat and derivative.

That floating roofline and the C-shaped taillights have both been done before and arguably better, though the roof does work well in one of the three available R-Code two-tone paint schemes. The high-mounted rear door handle and small rear windows recall the Hyundai Veloster. The awkward placement means you're forced to pull the handle like you would a door knocker. At least it looks cool.

The rear glass is sharply raked, ending in a ducktail that almost gives the C-HR a split-spoiler appearance. It looks good in an overdone Japanese way, though the result is limited rearward visibility. Cargo space is ample, although the load floor is a bit high. There definitely isn't anything as boldly styled in this class, save for the Nissan Juke. 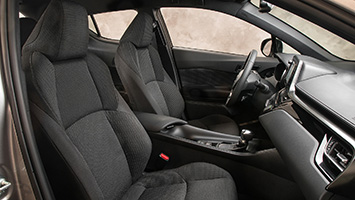 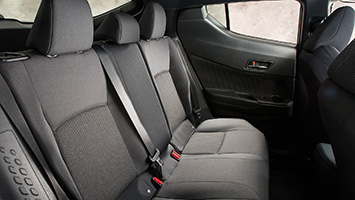 Sitting in the C-HR's back seat is akin to being trapped in an unlit basement, with just a small, high-placed window to see out of. The fact that the interior only comes in black doesn't help any. There is a giant plastic panel that covers most of the door, and shorter occupants will be left with only a view of the sky. Despite the poor visibility, the back seat is actually quite spacious. One 6-footer can sit behind another comfortably, with a surprising amount of arm and head room. That latter is likely owed to the lack of an available headroom-sapping moonroof (again, because Scion).

In contrast to the compromised rear, the front seat is mostly traditional Toyota. The gauges, infotainment, steering wheel, and switches are all straight from the Toyota parts bin. The console is deep and the cupholder height can be adjust to fit both short and tall bottles. While the seats look sporty and tight, they're actually really comfortable, with plenty of support all around. The steering column doesn't telescope very far, but at least it has some adjustability. The biggest letdown is the continued use of fingerprint-clinging piano black trim.

Toyota's infotainment system is serviceable bordering on disappointing. It's generally quick to respond, but the layout and design feel a generation behind. Worst of all, there is no navigation available in the C-HR. This might be forgivable given the prevalence of phone-based navigation, but the system doesn't support Apple CarPlay or Android Auto. That means finding a place to mount your phone, which is never as convenient as an integrated system. The infotainment also comes with Driver Distraction Secure Audio, a NHTSA standard that hides certain information like album art and track name while the car is in motion. 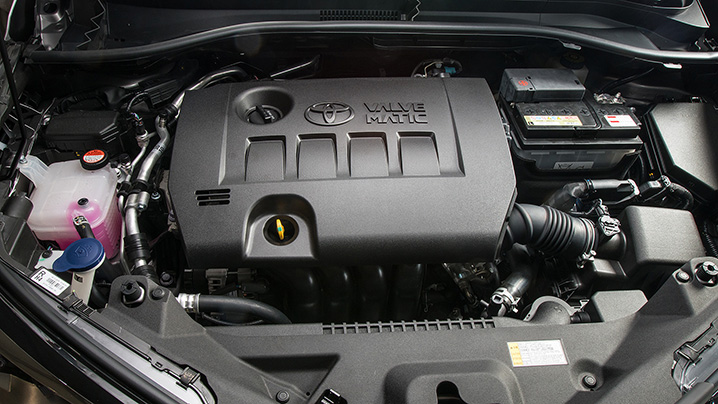 And in motion is where the C-HR prefers to be. For a crossover (that's a mighty big qualifier), Toyota's latest drives nicely. The steering is weighted well and makes the car easy to position in a turn. The wheel itself is larger than we prefer, but it's not school-bus big. The suspension keeps the car relatively flat and composed through corners. The brakes are tuned well and provide plenty of confidence – decent feel, good pedal length, and enough stopping power to carry you into a corner. Mind you, this is still no hot hatch.

The suspension and chassis tuning were handled in Europe, including multiple trips to the Nürburgring. The US-spec damping was changed to adjust for all-season tires. The C-HR's sporty suspension means a firm ride, which the standard 18-inch wheels don't help.

While the result is one of the better-driving vehicles in its class, most other brands weren't trying too hard. Two of its closest competitors, the Fiat 500X and the Honda HR-V, are tuned for comfort and practicality, eschewing any pretense of sportiness. The Jeep Renegade was made for dirt and mud. The Mazda CX-3 is as good or better to drive than the C-HR, but it's also significantly smaller.

The well-tuned chassis seems somewhat like overkill when you consider lackluster powertrain. The 2.0-liter naturally aspirated inline-four makes 144 horsepower and 139 pound-feet of torque, which is fine enough for the class. The US-only engine is mated to a fuel-efficient but soulless CVT. Despite making peak power at 6,100 rpm, the engine feels gutless at full bore. Sport mode helps by adjusting the throttle, but the "fake" gears it also enables probably hurt more than help in straight-line acceleration. Fuel economy hasn't been finalized, but Toyota expects the C-HR to net 27 city/31 highway/29 combined mpg, right on par for the class. 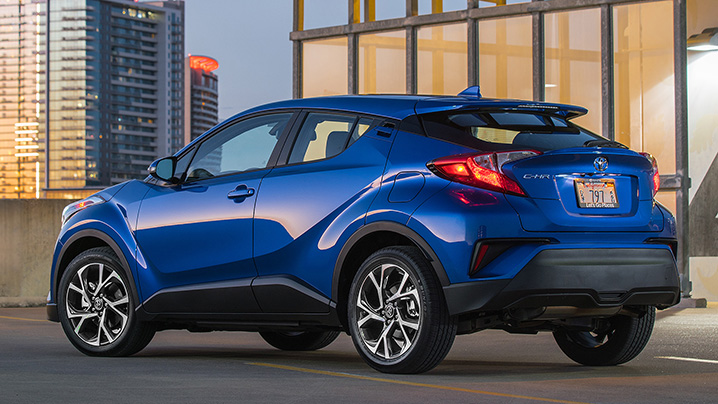 Like a good former Scion, the C-HR is aimed at millennials, the same group that Toyota's youth brand desperately wanted to attract. Toyota's ideal C-HR shopper is single or married without kids. Back-seat passengers of any sort would therefore be rare, which the company feels justifies the compromised second row.

People want crossovers for the looks, the high seating position, and the cargo space. Solid driving dynamics might be a bonus, but they're not the reason someone seeks out a small utility like this. That leaves the C-HR's unique styling and standard safety items as the big differentiators in a crowded segment. If those are priorities and you're a fan of the look, the C-HR is a good pick.

That said, Scion failed because people didn't care for what the company was selling. Sure, the fact this crossover now has a Toyota badge means it is going to sell by the literal boatloads (the C-HR is manufactured in Turkey); the company is expecting to move 30,000 units in 2017, ramping up to 60,000 in 2018. But it's still a vehicle built on Scion principles, and it's hard to overcome genetics. Those interested in options like navigation, leather, and a moonroof are going to have to look elsewhere.