The 2020 BMW X2 is the X1’s stylish and fun sibling. They share a common vehicle platform, including the same base engine and interior design, but diverge from there. Where the X1 succeeds at being a fun but utilitarian crossover, the X2 offers more performance, more distinctive style and more controversy. That extra performance comes courtesy of the sportier, more powerful M35i variant that's exclusive to the X2. The controversy comes from that style, which certainly won't be for everyone, and that, importantly, reduces the space and versatility many folks expect from an SUV.

That BMW offers choice in this growing segment can't be viewed as a bad thing, however. Some may like the X1, others may prefer the X2. Still, it's important to check out the segment's other strong entries, including the Volvo XC40 and all-new 2019 Audi Q3. Considering a non-luxury vehicle like the surprisingly luxurious Mazda CX-5 is a good idea too. Yet, the 2020 X2 remains a compelling entry for those who prioritize style and performance.

There are no noteworthy changes for 2020. The X2 was first introduced for 2018, with last year's key change being the introduction of the M35i variant. 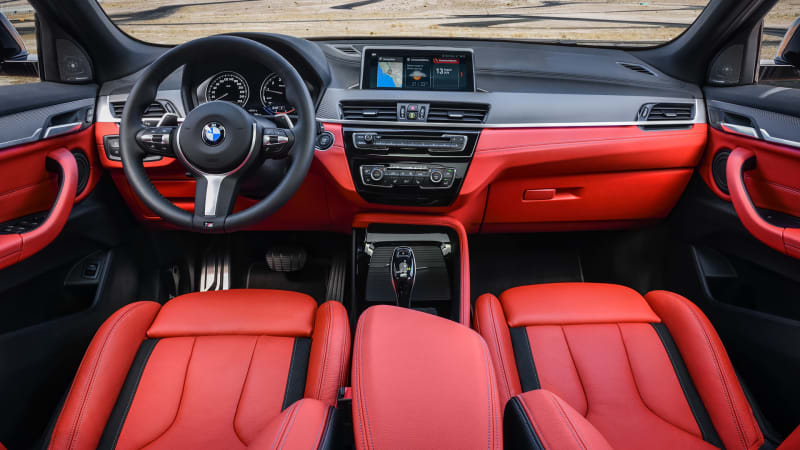 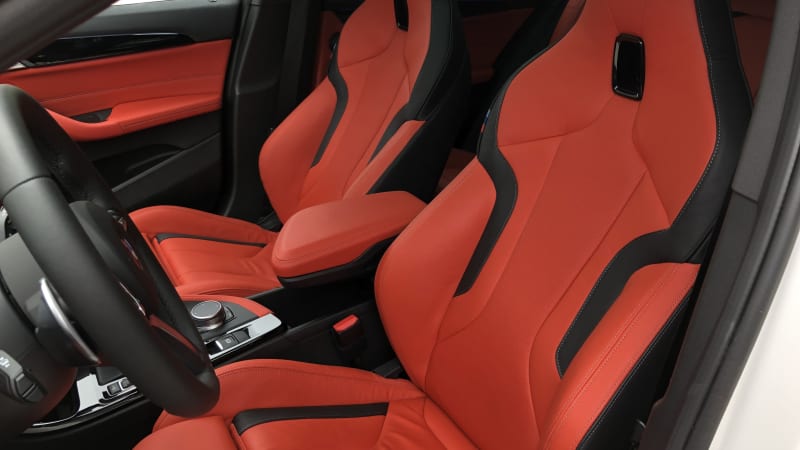 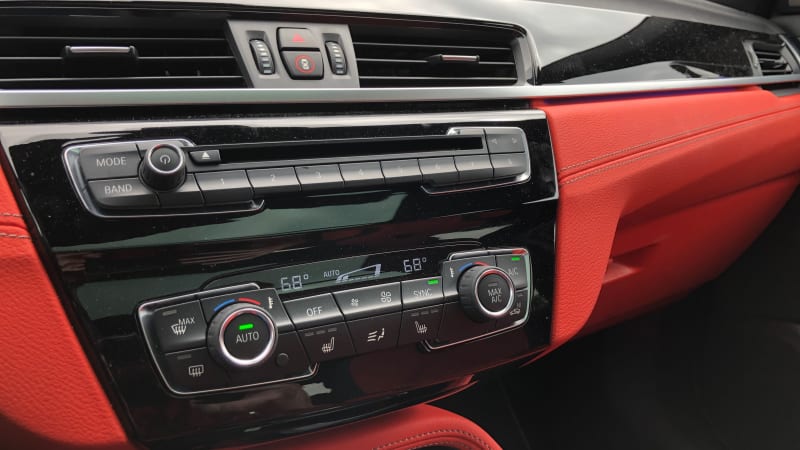 The 2020 BMW X2 has an interior that is fitting of a small, luxury crossover. It’s no 8 Series on the inside, but the high-quality materials and interfaces feel are appropriate for the BMW badge. It's not the most overtly luxurious atmosphere, but it can certainly be a stylish one with the right options selected. We're huge fans of BMW’s Magma Red interior color option, shown above. It’s a glorious red orange hue that pops against any contrasting exterior color.

One important aspect you should note is that the X2 doesn't have the high-and-mighty SUV-like seating position many expect from an SUV. Instead, it's lower and rather car-like. We didn't necessarily mind this, but it may not be what many crossover shoppers are seeking. At least know that the X2's X1 sibling comes closer to it. There's one nagging annoyance common with both small BMW SUVs, however: the offset steering wheel. They're not the only cars guilty of this, but it could prove to be a constant annoyance.

As for the tech, BMW equips the X2 with its iDrive infotainment system. It’s not the latest version you’ll find on models like the X5 and new 3 Series, which means its missing touchscreen functionality and several other features, but it’s still plenty sufficient thanks to a system that responds quickly to inputs via the rotary controller and surrounding menu buttons. Unfortunately, tech feature content is a bit thin. Android Auto is not available and BMW uniquely offers Apple CarPlay only as an optional subscription. Many cars that cost substantially less include both features as standard equipment. 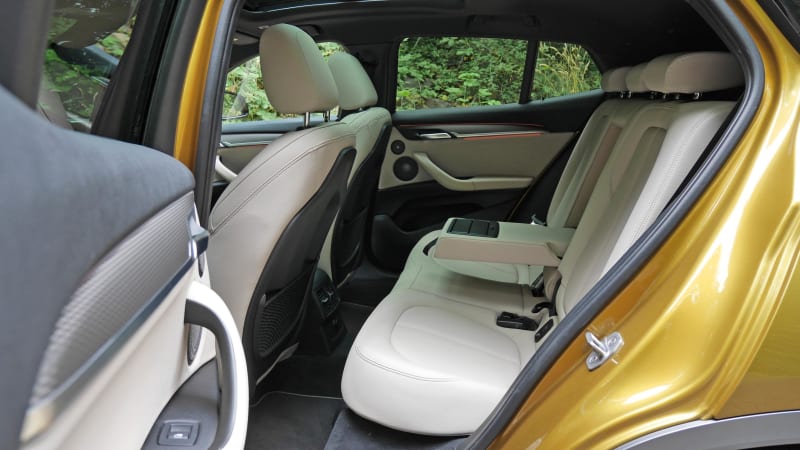 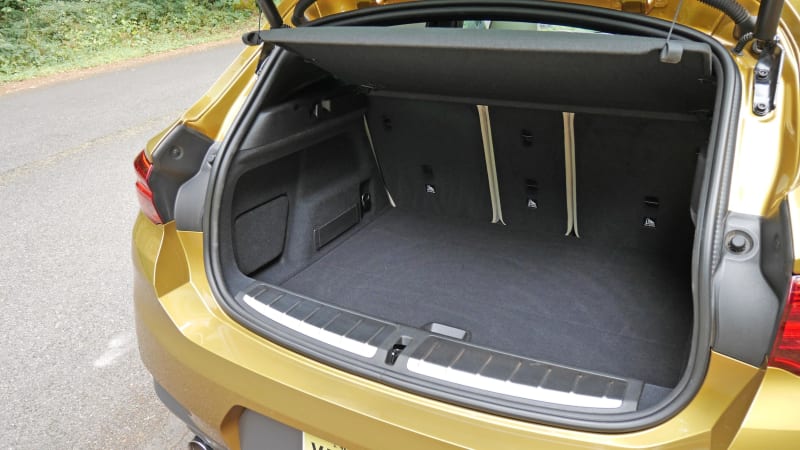 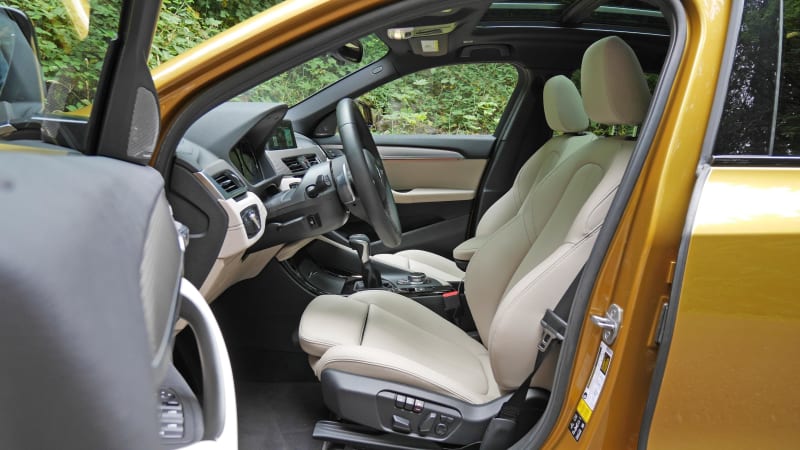 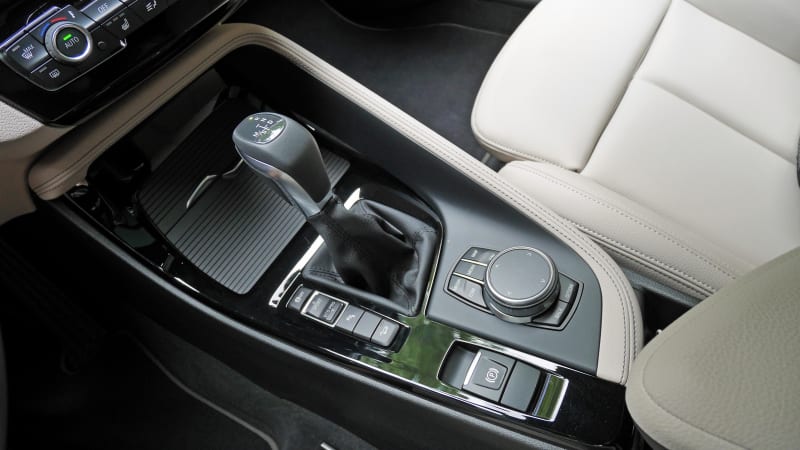 In terms of height, you're bound to notice how short it is from the get-go. It’s one of the few crossovers we can stand next to and see completely over it. This low roof does reduce headroom compared to the X1, but not so much that your head will be touching the headliner. It’s a little awkward getting back there with the small opening, but there’s plenty of space once settled with 36.7 inches of rear legroom.

In terms of cargo space, the X2 has a trick up its sleeve. At first try, we fit two medium-sized check-in suitcases and two roll-aboards behind its raised back seat. That's not great, but it's also pretty typical for a segment that doesn't exactly put the U in SUV. However, lifting up the cargo floor reveals the X2's full 21.6-cubic-feet of space, allowing us to fit another pair of roll-aboards and a small duffle bag, too. It basically takes the X2 from average to one of the best in the class. Just know that extra under-floor storage comes at the expense of a spare tire – if you opt for one that space disappears.

Both the X2 sDrive28i (front-wheel drive) and xDrive28i (all-wheel drive) come standard with a 2.0-liter turbocharged inline-four that makes 228 horsepower and 258 pound-feet of torque. It feels spunky at low speeds and is one of the strongest engines in the segment, but the M35i is the one to go for if you want real performance. The M-fettled four-cylinder puts out 302 horsepower, 332 pound-feet and drops the 0-60 mph time from the mid-6-second range to 4.7 seconds, according to BMW. That’s one quick crossover.

Fuel economy for the front-wheel drive X2 tops out at 23 mpg city, 32 mpg highway and 26 mpg combined. Opting for all-wheel drive drops those figures down to 21/31/25 mpg. The surprisingly efficient M35i only goes down to 23/29/25 mpg, according to the EPA. You’re likely to see the mileage start to drop when using all 302 horses in the M35i, though. 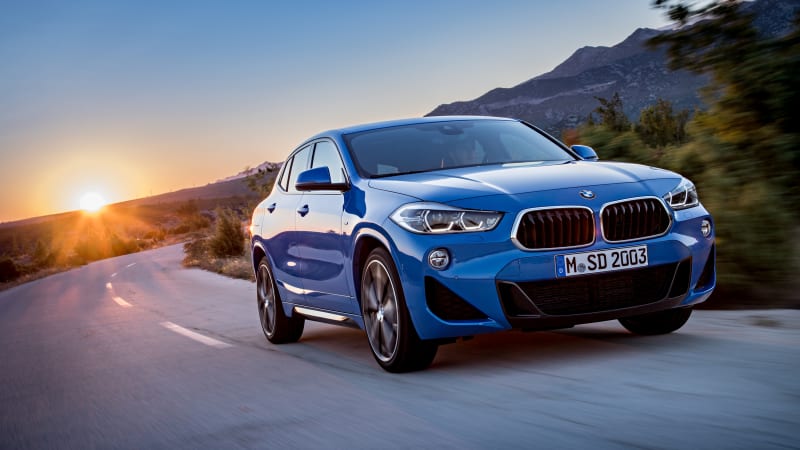 The 2020 BMW X2 xDrive28i looks a bit like a car and its lower driving position is similar to that of a car, so it shouldn't be surprising that it also drives more like a car than an SUV. We think that's a good thing, as it gives it a leg up in this segment. Although there's a bit more body roll than you'd get in one of BMW's sport sedans, this is still a fun vehicle befitting its badge. Things get even better when fitted with the $800 Dynamic Handling Package, which both stiffens and lowers the vehicle in addition to modifying the steering. It holds onto the pavement for far longer than you expect a subcompact crossover to and exhibits satisfying body control when attacking successive corners on a backroad. You can tell that BMW made a legitimate effort to make this small crossover agile and fun to drive.

The 28i engine is basically the same unit you'll find in a JCW Mini. It pulls plenty hard and is very smooth. It falls short of exhilarating, but you'll never feel left behind. The excellent eight-speed automatic transmission delivers fast shifts smoothly and always seems to be in the right gear.

As for the M35i, that’s where things really start to get exciting. The aggressive suspension setup is noticed over bumps and road imperfections, but it sure is worth it in the corners. If it weren’t for the car’s higher weight (3,721 pounds) and center of gravity, the X2 M35i would actually feel like a proper hot hatch. It changes direction quickly and with poise, especially when fitted with grippy summer rubber. The available drive modes (Comfort, Sport and Eco Pro) allow you to adjust the shock stiffness if you’ve tacked on the $500 Dynamic Damper Control option, and it makes a tangible difference in handling. Throwing it in Sport also makes the engine, transmission and exhaust more lively. We love the aggressive exhaust soundtrack that’s full of crackles and pops — the sound combined with how quickly it catapults you forward is impressive stuff. Call it weird or out of place, but the X2 wears the M35i badge well.

What more can I read about the X2?

Our editors share their impressions after spending time in the regular X2 equipped with all-wheel drive and a plethora of options. 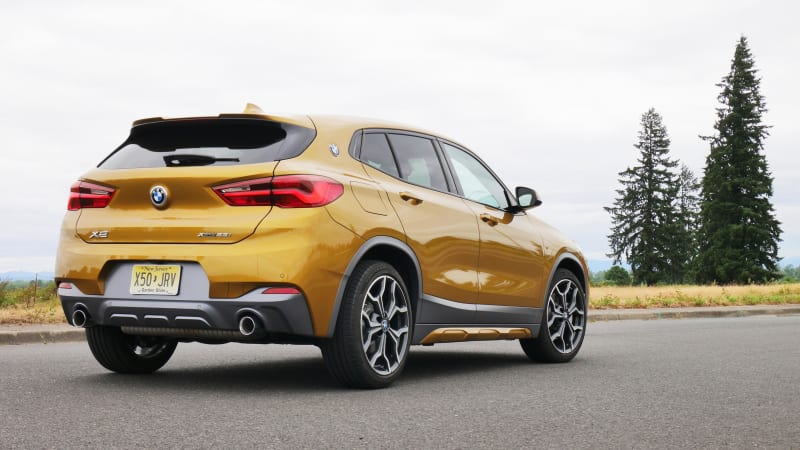 The 2020 BMW X2 sDrive28i starts at $37,395, including the $995 destination charge. BMW is big on offering a ton of options, but you get a fair amount of standard equipment for that price. It comes with 18-inch alloy wheels, LED headlights and foglights, power tailgate, a mix of glossy black and chrome trim, auto climate control, eight-way power front seats, "SensaTec" premium vinyl upholstery, ambient light, an 8.8-inch infotainment display with the iDrive knob controller interface and a seven-speaker audio system.

BMW doesn’t offer a bunch of different trims for the X2, but the all-wheel drive xDrive model bumps the price up by $2,000 to $39,395. The M35i performance model is considerably more at $47,445. In addition to its extra power and its M-tuned suspension, brakes and steering, you get a transformed exterior look with the M35i, as BMW paints most of the black plastic molding in body color and adds more aggressive aerodynamic elements. Tack on enough options, and the M35i balloons over $50,000. At that price, it starts to compete with larger, more luxurious SUVs, while making it awfully pricey for a hot hatch alternative. There’s plenty of performance, but BMW is asking a lot for it

You can read more about the features, specs and local pricing here on Autoblog.

What are the safety equipment and crash ratings?

BMW received a Top Safety Pick award from the Insurance Institute for Highway Safety, with "Good" ratings in all the crashworthiness sections. The government has not yet rated the BMW X2. 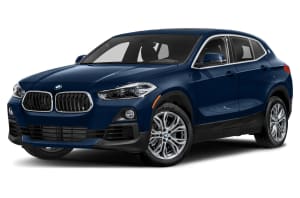