These first shots reveal a lot, but not everything

We just got our first look at the 2021 Ford Bronco, and to put it bluntly, it’s good. But after taking in the delightfully boxy shape and possible removable top – just as we were hoping for – it’s time to take a closer look at what’s underneath. We can’t spot every detail about the chassis and suspension, but there are a few things that stand out. 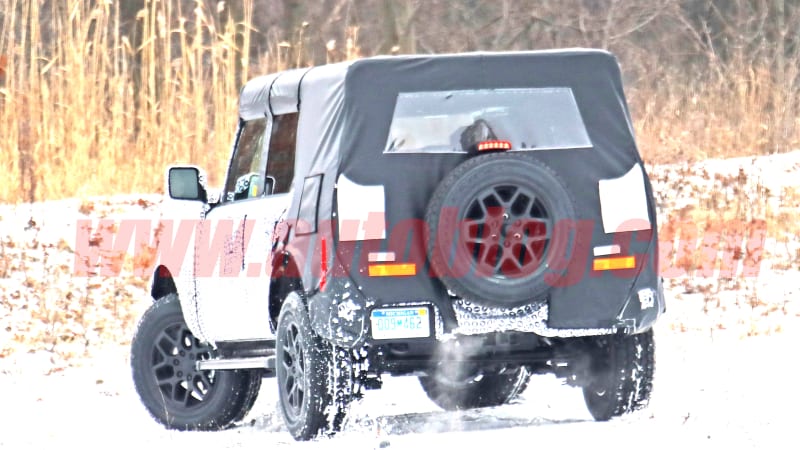 First of all, we can clearly see a live rear axle in the shot we've overexposed above, as we expected from a SUV that’s derived from the body-on-frame Ford Ranger. But unlike the Ranger, these spy shots add confidence that we’re looking at a rear coil spring setup, not a leaf-sprung axle. It initially appeared that we were looking at leaf spring shackles, especially on the left side of the vehicle from certain angles, but on closer inspection those look like trailing arms. That meshes with the previous spy shot set that appeared to show rear trailing arms. That mule, however, was wearing a goofy shortened Ranger body.

What’s it all mean? Like the Wrangler has utilized for a long time now, the Bronco will use coil springs all around. And as legions of Jeepers have proven on tough trails the world over, the setup works. We’re also liking the short overhangs and relatively compact wheelbase. Without being able to break out a measuring tape, we’re going to say it’s going to be a close match for the four-door Wrangler.

Up front, we can clearly make out an upper control arm in the driver’s side wheel well, which is no surprise at all. It’s also clear from the side shots that Ford isn’t skimping on braking duties. The front and rear calipers and rotors are generously sized. 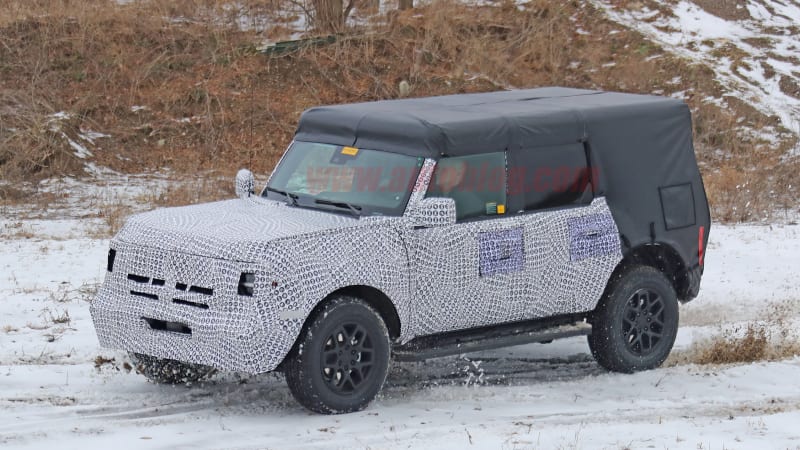 The front camo is heavy, but the sliver of headlight peeking out has a strong horizontal element, which squares exactly with the leaked Bronco headlight we saw late last year. The even smaller hint of orange peeking through the side of the housing also matches what we saw on that leaked unit.

The heavy padding obscuring the top almost certainly points to a removable roof system of some sort, and the rear door shape and size hints at its removability. We have earlier reporting on some patents that point to the same conclusions. So, while not a hard confirmation, consider this more evidence in favor of a removable roof and doors.

We also have some thin evidence that it'll pack the same EcoBoost 2.3-liter inline-four that the Ranger packs, courtesy of Canadian Tire. While that powertrain would make perfect sense considering the vehicle's relation to the Ranger, we won't take that as gospel quite yet given the source. Same goes for the Bronco Hybrid rumors.

The Bronco will be fully revealed this spring, according to the company. We can't wait to see the finished sheetmetal.