2020 Ford Bronco will have a hybrid version

This presents some interesting possibilities

UPDATE: Ford provided comment in response to our question about hybrid Bronco. The statement has been added to the text.

It seems Ford is quite serious about expanding its hybrid offerings. Beyond the recently revealed Explorer and Escape hybrids, the 2020 Ford Bronco is also getting an electrified powertrain. The news comes to us via Automotive News reporter Michael Martinez, who tweeted that Ford CEO Jim Hackett confirmed the variant during an investor meeting.


Hackett confirms the upcoming Bronco SUV will come in a hybrid variant as Ford focuses on electrifying its lineup.

We reached out to Ford to independently confirm the report, but were only given a broad statement saying that the company is adding many hybrids with more news to share later this year. The full statement is as follows: "We are on track to electrify our most popular vehicles, including launching the all-new Ford Explorer and Ford Escape hybrids this year along with the new F-150 hybrid in 2020. We also are on track to launch our all-new, all-electric Mustang-inspired SUV next year. We'll have more news to share about additional electric and hybrid vehicles in North America and globally later this year."

Naturally, we're curious what sort of hybrid system will be used for this Bronco. We would wager it will be a version of the hybrid unit used by the Explorer and Aviator hybrid. The 10-speed transmission and electric motor don't take up much more space than a conventional transmission, and it can clearly handle plenty of power and torque since it's coupled to the Aviator's twin-turbo 3.0-liter V6, which makes 400 horsepower and 400 pound-feet of torque without the hybrid system. If it isn't this system, we imagine it's a variant of whatever Ford is putting in its upcoming hybrid F-150, but we don't have details on that yet. For all we know, that could also be a version of the Aviator system.

The existence of a hybrid Bronco also leads us to believe that we'll see a hybrid Ford Ranger in the near future. The Bronco shares its platform with the Ranger, so it shouldn't be too difficult to adapt its particular hybrid system to the pickup truck. And considering Ford's push into hybrids and electric cars, it seems likely. The question will be whether it shows up on the current or refreshed model, or a more thoroughly redesigned version. 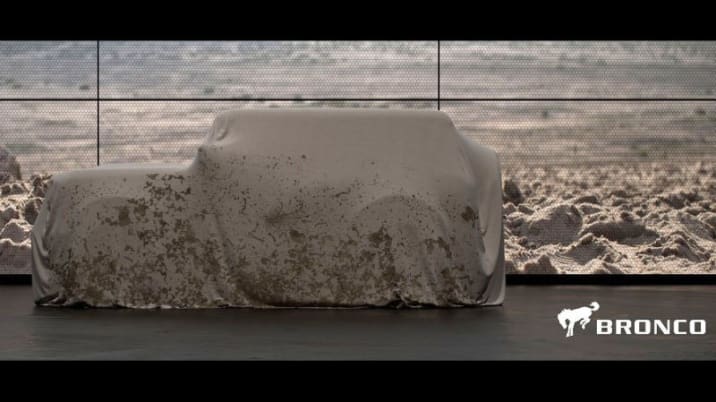 We're expecting the Ford Bronco hybrid to be launched alongside the normal one, so probably within a year for the 2020 model year. Other than the hybridization, the Bronco hybrid will probably be mechanically identical to the gas-only version, meaning a short wheelbase, independent front suspension, and probably a coil-sprung live rear axle. The Bronco hybrid will have competition soon after in the form of the Jeep Wrangler plug-in hybrid, a model that Jeep has confirmed for 2020. We expect that SUV to use a version of the Pacifica Hybrid's 260-horsepower V6 and electric motors, but naturally adapted to a longitudinal engine and traditional part-time four-wheel drive.