The 2020 Ram 1500 is a home run, plain and simple. From the humble Tradesman to the opulent Limited and every flavor in-between, this thoughtfully designed and well-executed truck impresses like none other. It possesses the capability expected of a half-ton pickup and dimensions that pretty much match its competitors, but it consistently goes above and beyond what's expected. Its coil spring rear suspension provides superior ride, handling and trailer control. Its interior is a model of quality, functionality and aesthetics, with user-friendly technology to boot. The breadth of engine options may not match its Chevy and Ford rivals, but the four available are fully competitive with ample power, strong fuel economy and advanced engineering in the form of the eTorque mild-hybrid system. If you're looking for a truck and don't at least consider the Ram, you're doing yourself a disservice.

The Ram 1500 regains its popular EcoDiesel engine for 2020, although this time around, its main competitors offer similarly powered engines as well. Also new is a Night Edition available for Big Horn and Laramie that adds blacked out trim, badging and wheels (it looks pretty similar to the truck above). The Rebel also gets access to a similarly blacked out appearance package and can also now be equipped with the Safety Group of driver assistance technologies. There are also three new colors. It's easy to be smitten by the Ram 1500 in its fanciest Longhorn and Limited trim levels, which are bedecked in soft leather, special color schemes and unique styling elements like the Longhorn emblem literally branded into real wood trim. There are unique features like the huge vertically oriented touchscreen and the ventilated reclining back seat. It's easily the most luxurious pickup ever made.

Crucially, however, we are actually more impressed by the basic Ram 1500 Tradesman and Big Horn trim levels. While the quality of plastics is typical for the segment (that goes for those ritzy Rams, too), the different textures and attractive design result in a cabin that looks and feels better than trucks that cost a comparable amount or more. For instance, the rich gray cloth upholstery in a Big Horn test truck contributed to a far more premium environment than the one found in a leather-lined 2019 Chevy Silverado.

The Ram doesn't just impress aesthetically. The five-passenger model's center console features clever, multi-configuration storage solutions thoughtfully designed for how people might use this space — it's not just some cupholders and a pair of differently sized bins. There's also a covered compartment under the rear floor and the RamBox bins that can be added to the bed walls.

In-car technology is exceptional as well. Even the most basic Tradesman has a perfectly useable 5-inch touchscreen and three USB ports, while the 8.4-inch Uconnect touchscreen found on other trims is one of the most user-friendly interfaces on the market and includes Apple CarPlay and Android Auto. Additional USB ports can also be added to the rear, including the USB-C type. The top three trims can step things up further with the aforementioned 12-inch vertical touchscreen.

The 2020 Ram 1500 is available with three body/bed configuration: extended Quad Cab with a 6-foot-4 bed, or a Crew Cab with either the longer bed or a standard 5-foot-7 bed. The exterior dimensions are similar to its competitors. Also note that while there are also two tailgate designs: the standard one and the optional multifunction split design demonstrated in the video below.

Interior dimensions are also similar to those of its competitors. The Quad Cab's rear legroom (34.7 inches) is the same as the Toyota Tundra's, but a bit more than a Ford F-150 Super Cab's (33.5) and a bit less than a Silverado Double Cab's (35.2). All of those figures equal cramped legs, and given the upright backrest angle they all share, none are exactly ideal for lengthy journeys. Neither is the six-passenger model's front middle seat, but at least its seat back is notably higher than any other truck's and should actually provide some head and neck restraint to go with additional comfort.

If you really need your truck to ferry passengers, though, an upgrade to the Crew Cab is a must. With it, backseat legroom grows to an indulgent degree to a whopping 45.2 inches. That's about 2 inches better than the Silverado Crew Cab and F-150 Super Crew, and 3 inches better than the Tundra Crew Max. Admittedly, all possess so much massive, stretch-out legroom that there'll likely be a full foot from knees to the front seat back. So yes, the Ram has more, but we're not sure it really matters. What could, however, is the available reclining back rest that increases comfort considerably. The Tundra is the only other truck that offers that.

The standard engine is a 3.6-liter V6 that is aided by a 48-volt mild hybrid system Ram calls eTorque. It adds a small amount of electricity while accelerating from a stop to increase power and refinement, as well as improving the automatic stop/start system and fuel economy. We explain it more in our Ram 1500 eTorque first drive. Output is 305 horsepower and 269 pound-feet of torque, and an eight-speed automatic is standard. EPA-estimated fuel economy is 20 miles per gallon city, 25 mpg highway and 22 mpg combined with RWD, and 19/24/21 with 4WD. It wasn't so long ago that V6-powered midsize sedans were getting that sort of fuel economy.

There are two versions of the optional 5.7-liter V8 available, both good for 395 hp and 410 lb-ft of torque. One has eTorque and achieves 17/23/19 with RWD, an estimate we confirmed during our test of a Ram 1500 Big Horn. The other version does not have eTorque and achieves 15/22/17 with RWD. The penalty for 4WD is negligible. While the differences in fuel economy with and without eTorque may seem small in terms of the mpg figure, they can actually equate to hundreds saved in gas every year.

For 2020, the EcoDiesel engine re-enters the Ram lineup. The 3.0-liter V6 produces 260 hp and a 480 lb-ft of torque that is tops among full-size truck diesel engines. It returns 22 mpg city, 32 mpg highway and 26 mpg combined with RWD, and 21/29/24 with 4WD. That's a smidge lower than the Chevy DuraMax diesel, but a smidge better than Ford's PowerStroke. Although your savings will largely depend on diesel prices where you live, the EcoDiesel could save you many hundreds of dollars at the pump every year compared to the eTorque V8. It'll also allow you to go much further on a tank. 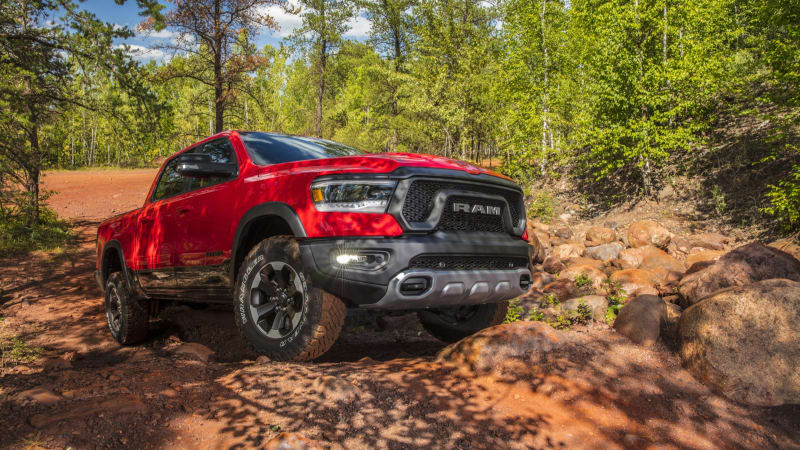 The Ram 1500 is so refined that it can feel like you're driving a large crossover rather than pickup. Thanks to its five-link coil spring rear suspension, its ride quality is buttery smooth in comparison to rival trucks that all have leaf springs. That suspension design also benefits handling and trailer control, and can even be upgraded with an available air suspension capable of raising to clear obstacles and lowering for easier loading. The steering possesses linear, consistent effort and is reassuringly precise on-center. It's not quite as sharp as the Silverado, but it doesn't feel as truck-like as a Ford F-150's.

Acceleration from the eTorque-equipped V8 is similarly buttery smooth and impressively quiet. You don't really notice the smidgen of power contributed by the 48-volt electrical system as you would in a proper hybrid, but you also don't notice noise or vibration coming from the automatic stop/start system. Even without eTorque, however, the Hemi V8 is still excellent and wonder if it'll be cheaper to maintain in the long term. Similarly, you'd be hard pressed to know that the base V6 possesses eTorque, and you'll be surprised at just how capable the Ram can be with only six cylinders. The eight-speed automatic certainly helps in this regard, especially while towing.

As for the new-for-2020 EcoDiesel, it impresses with its quiet and confident voice, steady power, easy response and smooth acceleration. Like other diesels, it starts to run out of steam higher in its rev range, but that's where the eight-speed automatic comes in handy once again. We towed with this engine, used it while off-roading in the Rebel and generally found it well-suited to truck duty. 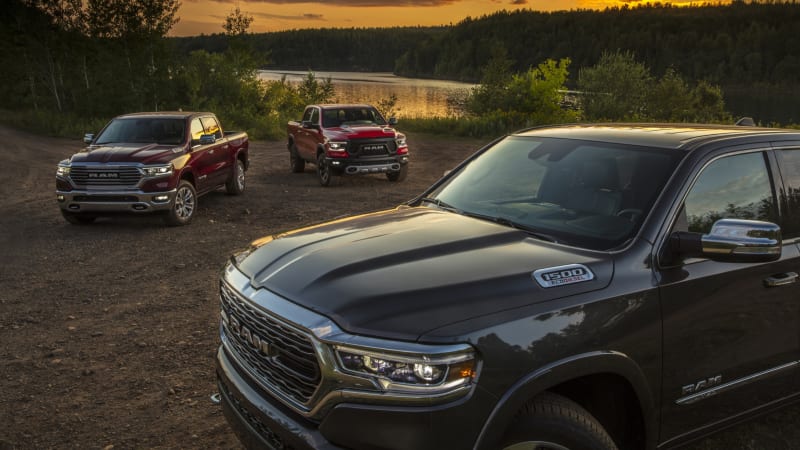 Our editors also got a chance to evaluate the basic Tradesman. It still impressed. Find out more about the V6 and V8 engines equipped with the eTorque mild hybrid system. Our most comprehensive first drive of the Ram 1500, including multiple videos and in-depth information about its design and engineering. There are six 2020 Ram 1500 trim levels: the volume-selling Tradesman, Big Horn and Laramie, the off-road-oriented Rebel, and the luxury-lined Laramie Longhorn and Limited. Note that the Big Horn is known as Lone Star in Texas and some surrounding states.

Pricing starts at $33,840 for the most basic Tradesman Quad Cab 4x2 with the base V6, but as is the case with all the trim level prices listed below (and for all full-size trucks, for that matter), sizable discounts are bound to significantly drop the price.

You can find a full breakdown of these trim levels' features, specs and local pricing here on Autoblog.

Front-, front-side and side-curtain airbags are standard along with a rearview camera. Blind-spot and rear cross-traffic warning systems are standard on the Limited and optional on all but the Tradesman. Unfortunately, forward collision warning, automatic emergency braking and lane-keeping assist are only available on the Laramie, Rebel, Laramie Longhorn and Limited.

In government crash tests, the Ram 1500 Crew Cab received five out of five stars for overall and side crash protection, and four stars for frontal protection. The Quad Cab differed with a four-star overall rating. Both cab styles received the best-possible ratings for crash protection and prevention from the Insurance Institute for Highway Safety. Those equipped with upgrade headlights received a Top Safety Pick award.