Time to see how a four-cylinder full-size truck performs

Excelent powertrains, from the new 2.7-liter turbo four up to the 6.2-liter V8. The Silverado is plenty capable, too, with a big bed and plenty of payload and towing. The interior just can't match the competition, especially on upper trim models.

A four-cylinder pickup truck is usually a sad-looking thing on tiny steel wheels with a lawn mower and some rakes sticking out the back. It's nothing someone aspires to. And yet, this 2019 Chevrolet Silverado 1500 LT Double Cab painted a brilliant red drew numerous unsolicited compliments of "Hey, nice truck" despite having a mere four cylinders taking up minimum real estate in its huge engine compartment. There's no badging on this Silverado to indicate it has the optional 2.7-liter turbocharged four-cylinder, and the LT is a chrome-clad, volume-selling model — not some gardener special with a face of black plastic.

So there's no visual tell, but there sure is an audible one. At idle and start-up, this is a much quieter truck than one firing twice as many cylinders. At full throttle, it has the warbling whir of a hot hatch rather than the roar of a V8. This is more a matter of cognitive dissonance than an actual problem — you expect a truck to sound a certain way, and when it's so profoundly different, you take notice.

Once underway, though, the not-so-little four-cylinder that could mostly fades into the distance. You don't really hear the engine when cruising, but you do hear the dual-volute turbocharger, and it's odd. Almost diesel-like. Although you don't really notice yourself making tiny throttle applications to maintain speed while cruising, you will eventually notice the turbo reacting to them. Initially I thought I was suddenly driving by some songbirds, or that there was some electronic interference on my podcast, but nope, it's the turbo waste gate. At best it's unusual, at worst, it's annoying. 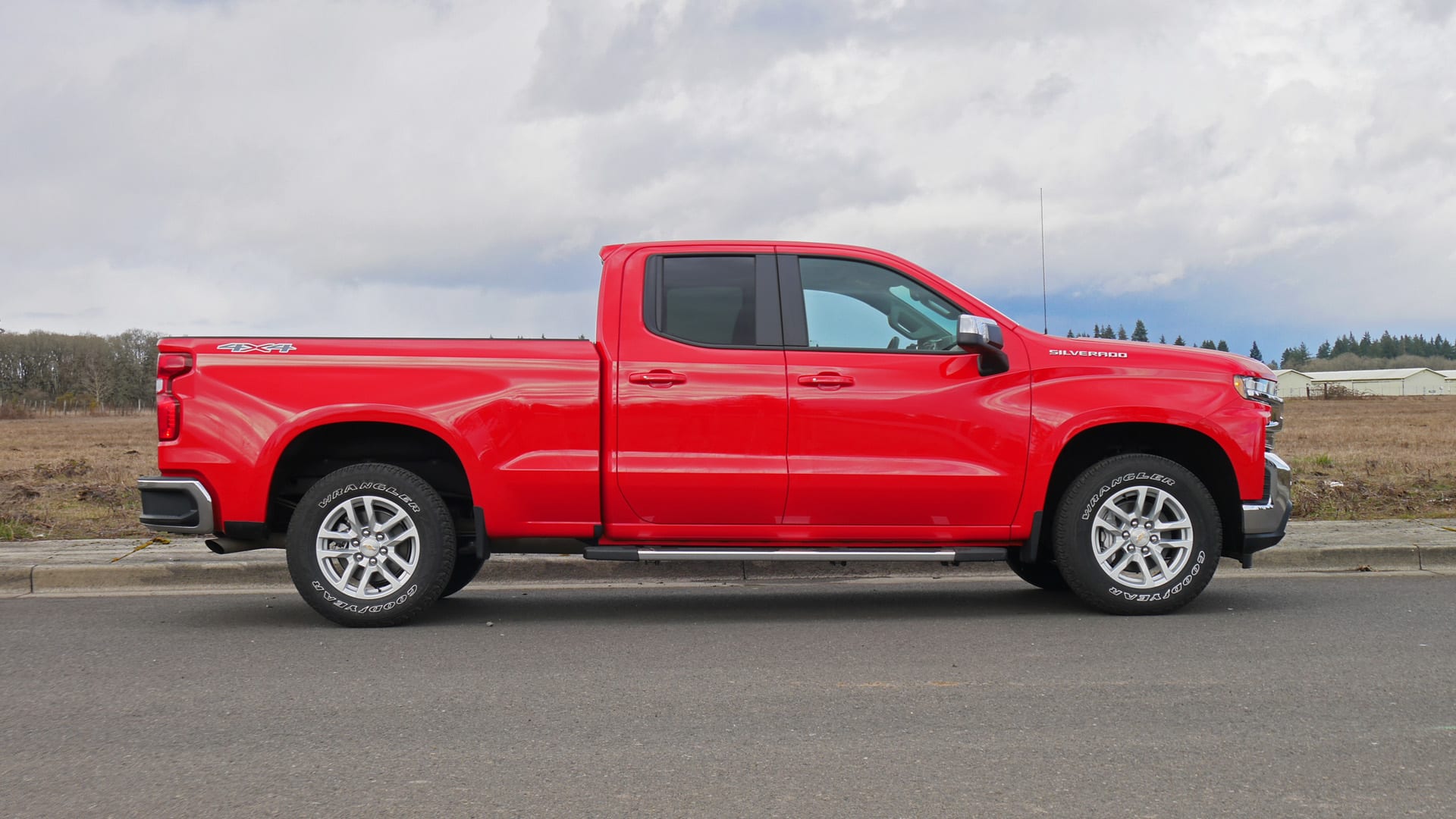 It's therefore difficult to doubt its capability, and thanks to having fewer cylinders, a smart eight-speed automatic and active fuel management (it can run on only two cylinders), the 2.7-liter Silverado achieves an EPA estimated 18-20 mpg city, 21-23 mpg highway and 19-21 mpg combined depending on cab and drivetrain. That's the best among non-diesel engines (such as the one eventually offered in the Silverado), and in theory, can save you an EPA-estimated $250 per year compared to a Silverado with the 5.3-liter V8, which achieves between 17 and 19 mpg combined.

On my 70-mile evaluation route that's a mix of city and highway driving, our four-wheel-drive turbo Silverado achieved 19.4 mpg. That largely confirms our specific truck's 20-mpg EPA combined figure, but a two-wheel-drive Ram 1500 with the Hemi V8 and eTorque mild-hybrid system managed 18.7 mpg on the same route. The EPA says that should get 19 mpg combined regardless of drivetrain. From this small sample size, it sure seems like a 48-volt mild hybrid system is a better way of achieving superior fuel economy without sacrificing capability than a giant turbocharged four-cylinder. 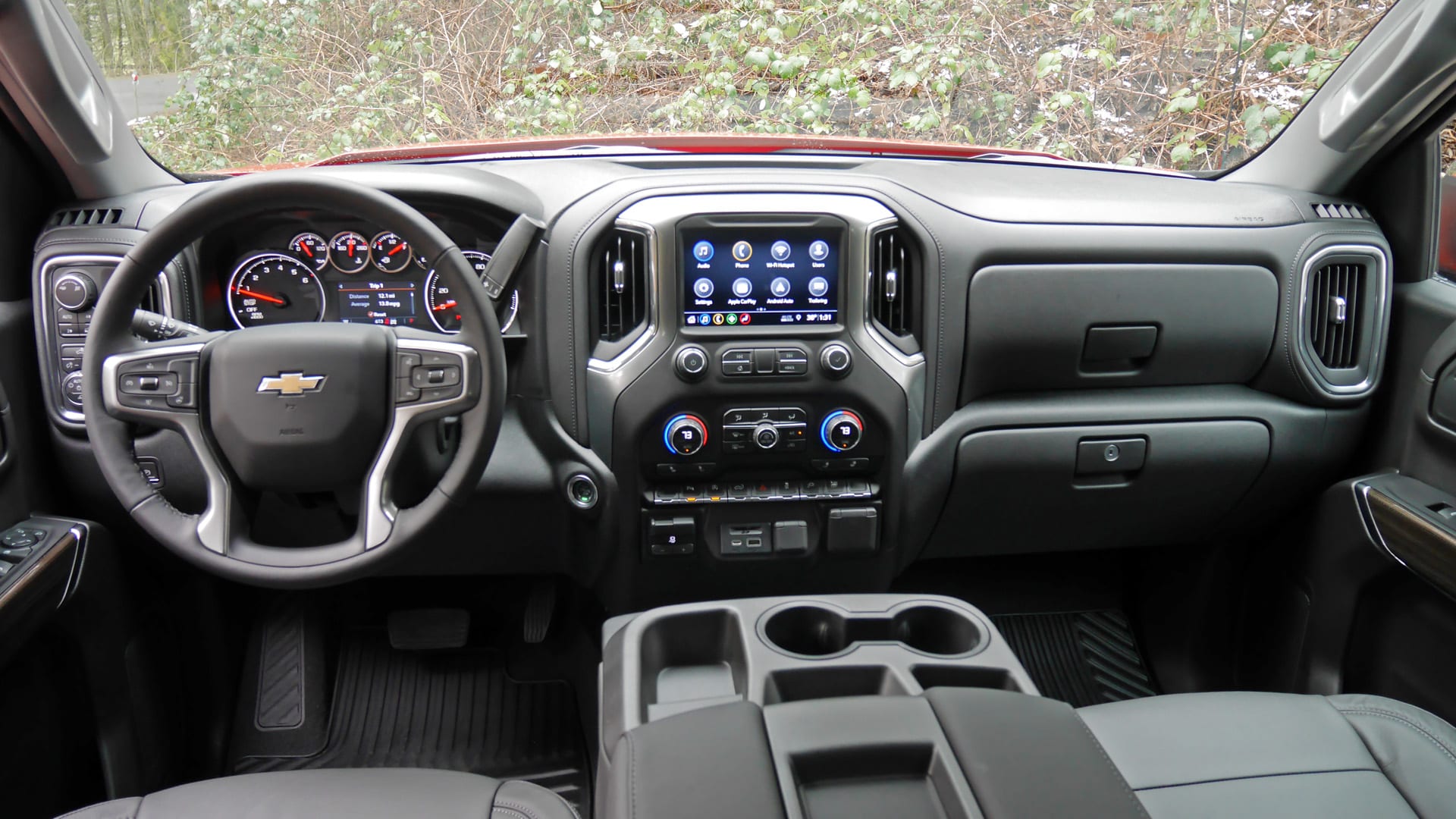 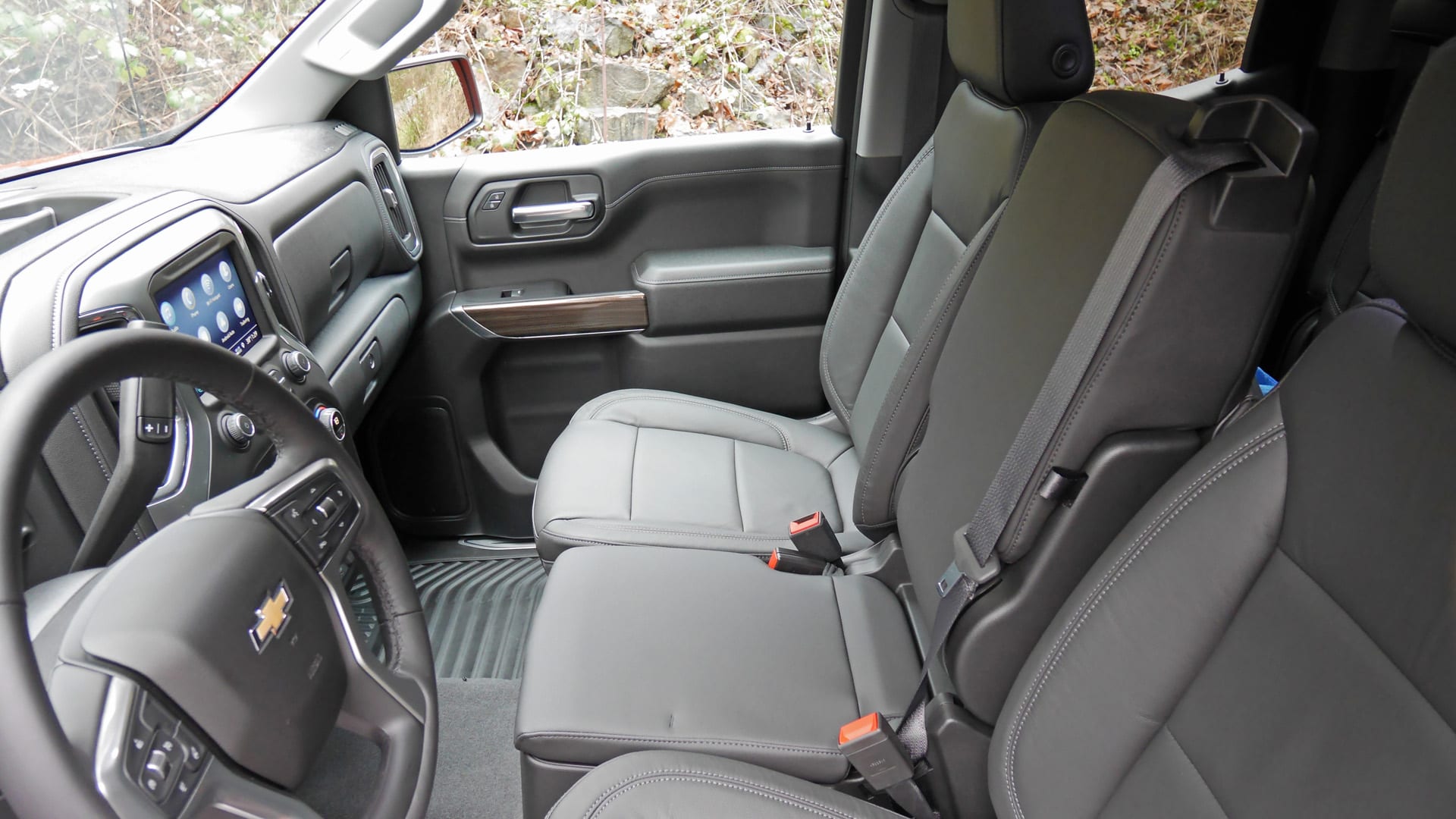 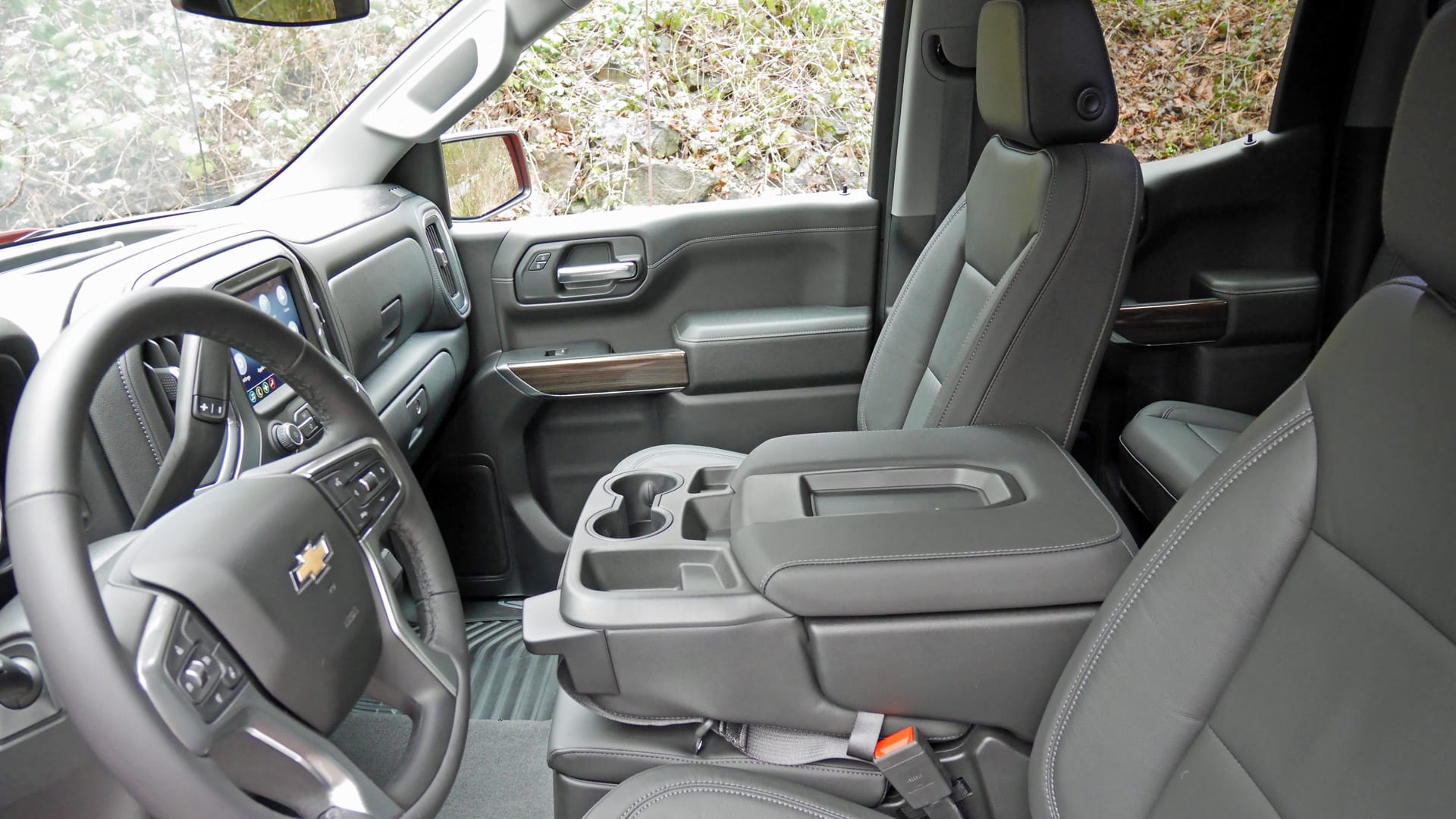 That's a problem, because besides packing a more appealing engine, the Ram is just a far nicer truck. It's not just a matter of the new Ram being superlative, it's the Silverado being disappointing. Although the quality of materials isn't notably worse, the Silverado's design is ugly, slab-like and dour. It gives off a low-rent vibe despite heated leather seating and plenty of other niceties. The Ram also has a more natural, crossover-like driving position, a multitude of clever storage solutions, and the superior ride. Much of the same can be said in comparison to a Ford F-150 Lariat, which when comparably equipped and packed with its 2.7-liter turbo V6, would be about $1,000 more than our four-cylinder Silverado.

In terms of ride quality, this Silverado LT had 18-inch wheels and ample sidewall, and thus avoided the harsh ride reported in Silverados with bigger rims. I found it to be quite comfortable, but I also discovered that certain circumstances can flummox its suspension. A bit of my evaluation route features broken pavement and a series of undulations in a 20-yard span typically taken around 40 mph. Most vehicles, including the Ram 1500, Ford F-150 and Toyota Tundra, just react in various degrees of harshness to the broken pavement. The Silverado, on the other hand, banged over the broken pavement while also nautically bounding over the undulations, springing up and down like the S.S. Minnow in chop. I actually LOL'd, having never experienced a reaction like that before. Odd.

One dynamic element that does need to be praised is its steering. It has linear, consistent weighting and is generally confidence inspiring, feeling more connected and responsive than those of its rivals. It feels more like it belongs to an SUV, and effort can even be increased a tick with a unique Sport mode. As a result, this Silverado felt relatively athletic. 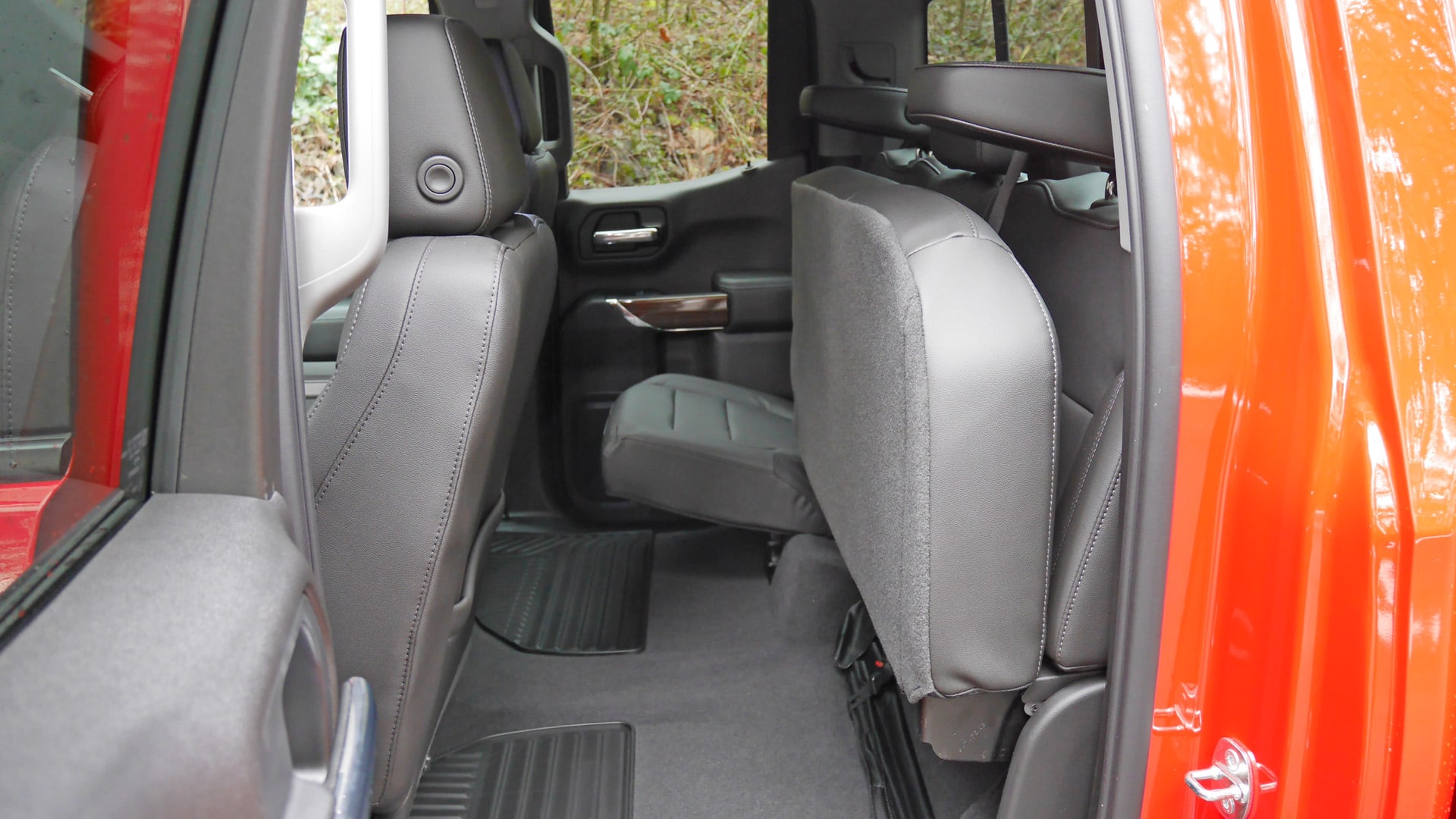 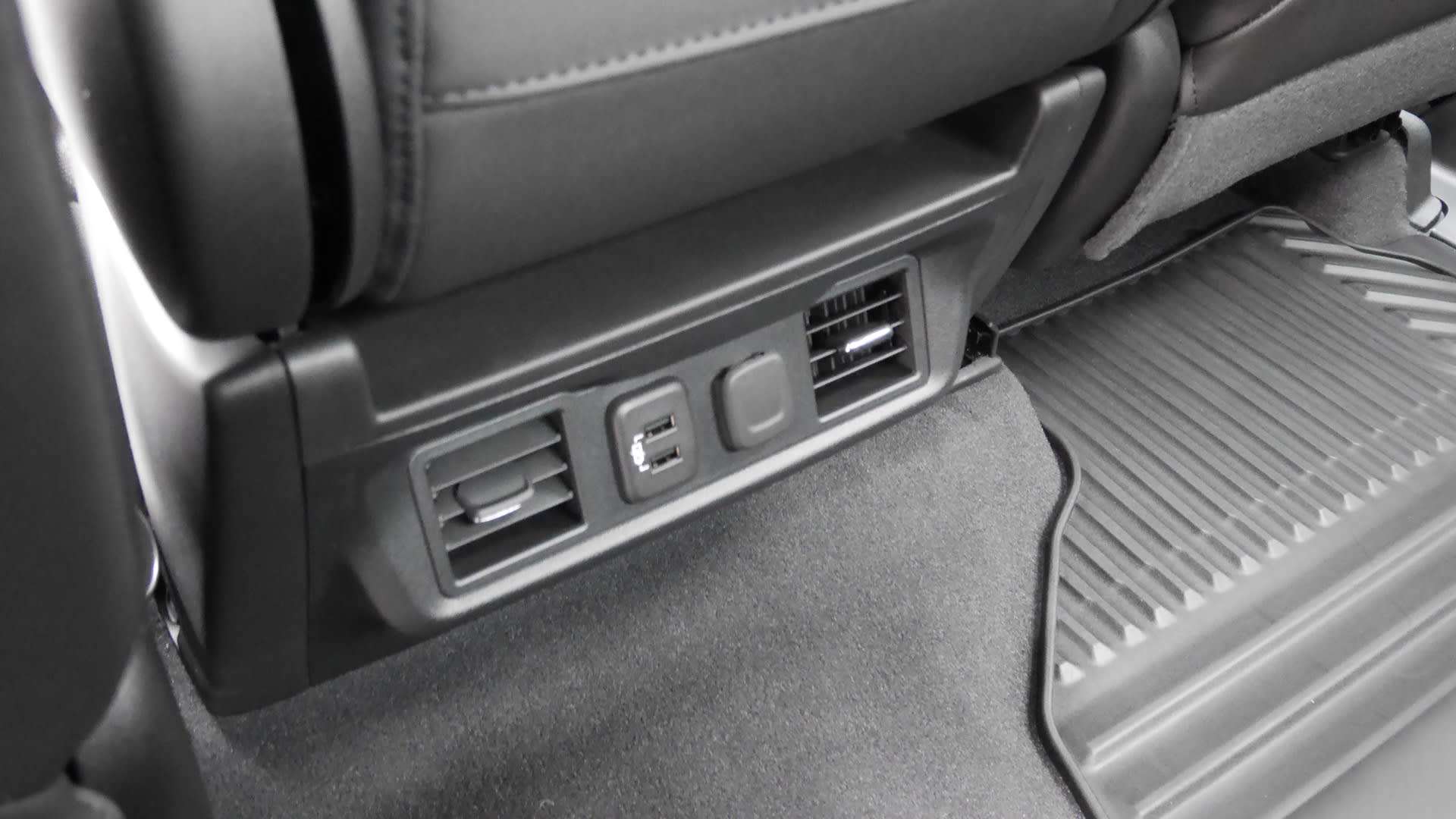 Now, what about the Double Cab portion of this review? As in other extended cabs, the rear seatback is more upright than what you'd find in a crew cab model. Legroom may be class-leading but it's still tight behind a tall driver, meaning the Double Cab's back seat is ultimately best suited for occasional use. At least its front-hinged rear doors are a better set-up than the F-150 Super Cab's annoying clamshells.

As in other trucks, the Silverado's back bench bottoms are 60/40-split and flip up for storage space. There are a pair of USB ports and air vents (photo above right), but the latter are located so low that they'll mostly be cooling your passengers' ankles. To be fair, that positioning is the result of this being a six-passenger truck with a front middle seat in lieu of the full center console. Those who find themselves in that central throne will find a shorter backrest than the one in the Ram 1500 that provides a modicum of head and neck restraint.

The Silverado does provide decent storage for a six-seater, however, including a bin under the seat, another under the armrest, a pair of sizable cupholders and a decent place to store your phone. You can plug it into the dash with the wire bridging the gap to the bin/armrest. Shifting is handled with an old-fashioned column stalk.

It's typical for manufacturers to present top-dollar, high-powered trucks for media evaluation, so it's refreshing to see a mid-grade choice like this 2019 Chevy Silverado LT pass through our garage. Extended cabs in particular are rare, as are the longer bed lengths they're attached to. This really did feel like the sort of truck the majority of buyers would take home, as opposed to this. However, the real question will be how much of that majority chooses the four-cylinder engine option. Saying "no" seems likely to be the knee-jerk reaction for many truck buyers, but given its stronger power and fuel economy (however negligible it might be), it's certainly more appealing than a base V6. But when compared to a Ford turbo V6 or a Ram mild-hybrid V8 for similar money, it's a much tougher sell. 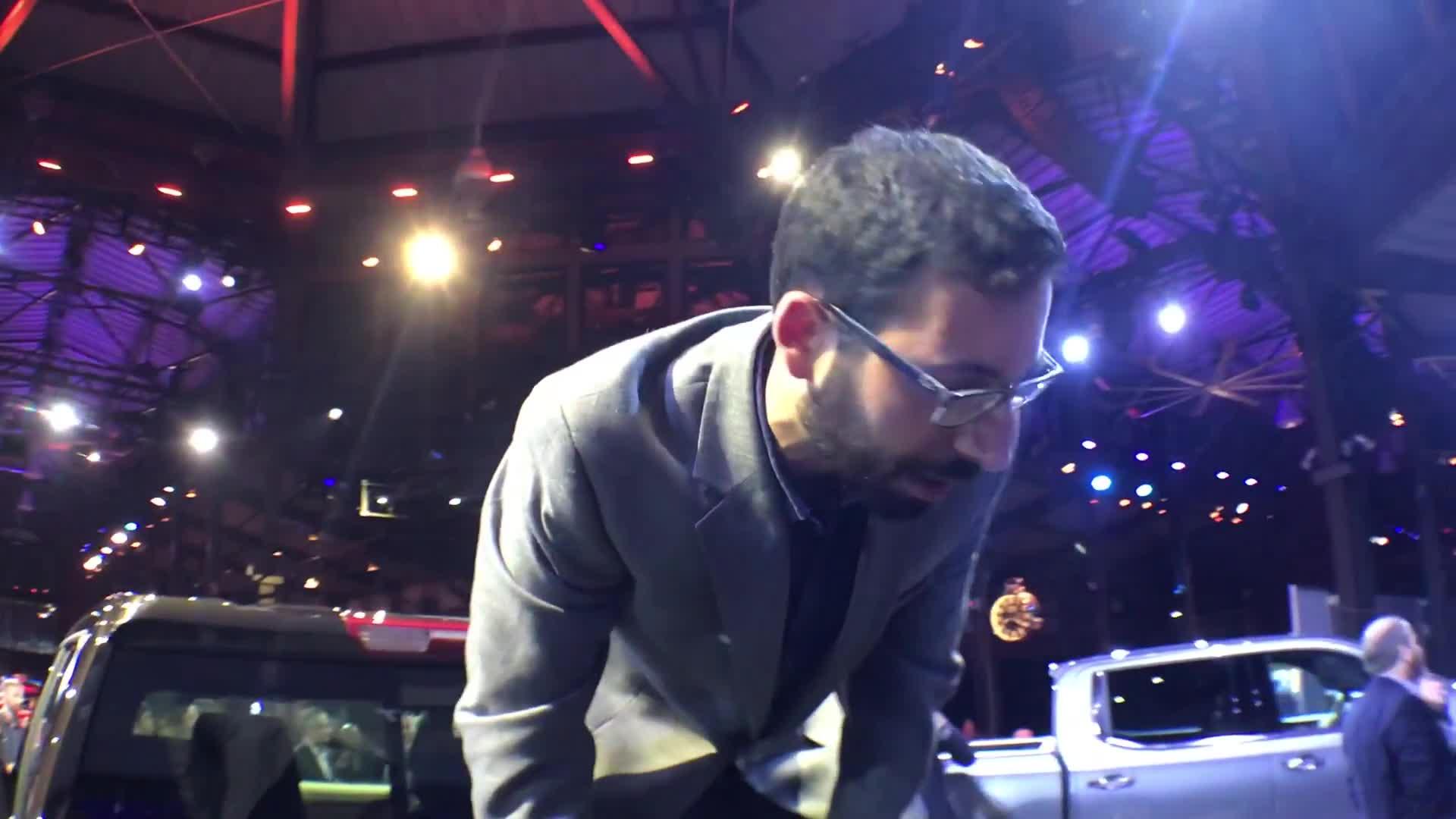