A pair of 2020 CR-Vs, including the all-new Hybrid, are tricked out for adventure

At SEMA next week, Honda will celebrate 60 years in the U.S. by bringing along a few tricked-out SUVs and trucks like the CR-V and a concept Ridgeline geared toward veering off the paved road.

The centerpiece will be a pair of 2020 CR-Vs — one the slightly refreshed combustion version, the other the all-new two-motor Hybrid variant. Both builds are by Jsport Performance Accessories, done in respective “overlander” and “weekend warrior” themes.

The overlander “Dream” build comes in a topographic map paint scheme. It includes a 1.5-inch lift, side steps, front bumper, rear tire gate and a modular roof rack from Jsport, plus 17-inch off-road wheels with all-terrain tires. The cargo area gets an organization cabinet and nifty slide-out fridge, while the whole thing is topped off by a Roofnest Falcon clamshell tent.

Meanwhile the CR-V Hybrid “Do” build gets the same lift kit package, wheels and Nitto Ridge Grappler tires, plus a Jsport roof basket with a Cannondale mountain bike mounted atop for show. 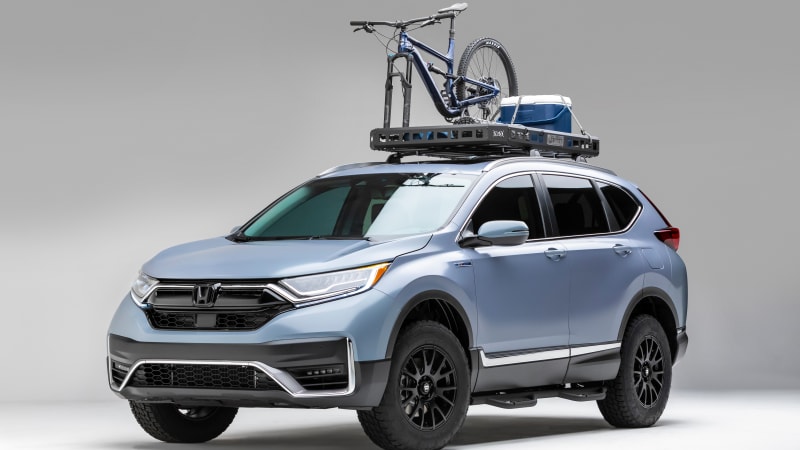 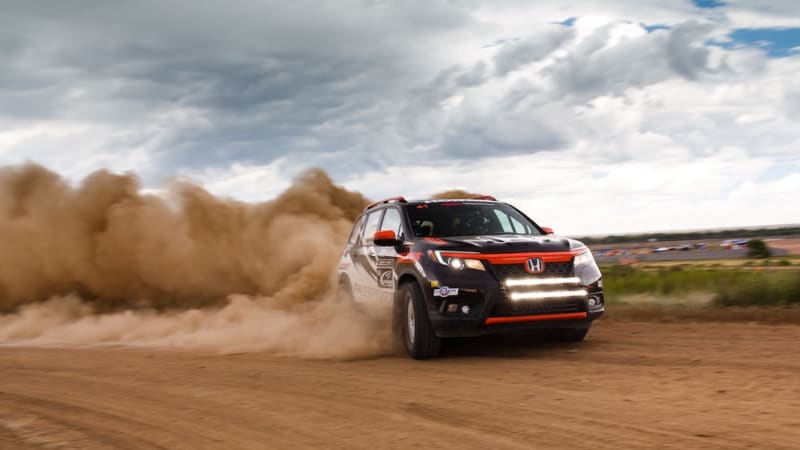 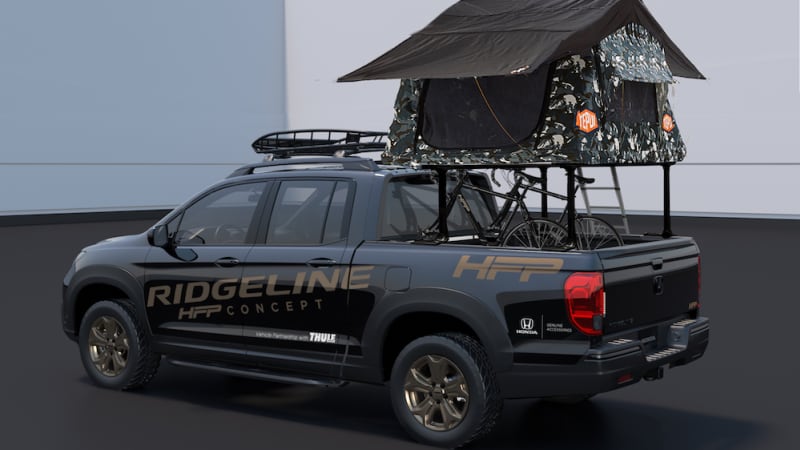 Honda Factory Performance will show its Ridgeline HFP Concept, a lifted version of the standard pickup with a widened stance, though just how much either measurement is increased Honda does not say. It has all-terrain tires wrapping 18-inch concept bronze-finish HFP alloy wheels and various Honda accessories. There’s also a bed rack from Thule, custom Fuji mountain bikes and a Siberian camo tent from Kukenam.

Honda’s Ohio R&D unit will show off the 2019 Rally Passport it built as a private, after-hours project to compete in stage rally competition in the American Rally Association’s Limited 4WD class, where it placed second in class and 12th overall in the Southern Ohio Forest Rally. Modification features include a roll cage and other safety equipment, Maxxis RAZR MT Tires on Braid Wheels, Carbotech brake pads, front and rear skid plates, and a hand-operated hydraulic brake.

Honda will also display the restored 1961 Chevrolet Apache pickup that it used to deliver motorcycles to dealers in its early days, and have several cars and motorcycles on display at SEMA. You can read about those here.

$1,080 - $2,046 Nat'l avg. savings off MSRP
See Local Pricing
I'm not in the market for a vehicle at this time. Please move this suggestion to the side for 30 days.
Huge Savings