RAYMOND, Ohio—As part of its long-running “Safety for Everyone” campaign, Honda has established the audacious goal of what it calls a “zero-collision society.” But rather than making big claims about developing a fully-autonomous vehicle, which Honda hasn’t done, the company is trying to chip away at the more than 37,000 vehicle-related fatalities that occurred in the U.S. in 2017 with a multi-pronged approach.

Here in central Ohio, engineers are working with state-of-the-art facilities and equipment to boost active safety systems like its HondaSensing suite of safety technology with old fashioned passive systems like structural steel frames or new airbag designs that protect passengers in a crash. Honda provided members of the press with a rare tour inside its Honda R&D Americas headquarters this week.

Honda officials say that increasingly, safety — and specifically, third-party ratings from the likes of the National Highway Safety Traffic Administration and the Insurance Institute for Highway Safety — figure into the top three factors consumers weigh when purchasing a vehicle. Honda and Acura have 10, 2019 models that have earned IIHS’s Top Safety Pick or Top Safety Pick+ ratings, and all 15, 2019 model-year Honda and Acura vehicles that have undergone NHTSA crash testing have earned a 5-star overall rating.

And Honda prides itself on its growing list of safety firsts, including the first upward-deploying front passenger airbag, in 1990 in the Acura Legend; first omni-directional crash-test facility, in 2000; and the first autonomous braking system, in the 2006 Acura RL. It hopes its new three-chamber airbag goes industry-wide and joins that list.

“It’s part of our company’s culture,” said Art St. Cyr, business head unit and vice president of auto operations for American Honda Motor Co. “We have a philosophy at Honda that we want to be a company that society wants to exist. That means we have to protect our customers. That’s part of the whole mantra of doing this.”

Opened in 1984, the 1.6 million square-foot Honda R&D Americas facility, located in the countryside about 45 miles northwest of Columbus, employs around 1,600 people and is Honda’s largest research-and-development facility outside of Japan. Its Advanced Safety Research facility opened in 2003.

Honda is also benefiting from partnerships, with both Ohio State University for the latter’s distracted-driving simulation laboratory, which Honda helps to fund, with NHTSA at the Transportation Research Center, which is adjacent to Honda’s R&D campus, and the state of Ohio at its Marysville smart intersection, where it is testing vehicle-to-everything (V2X) technology. 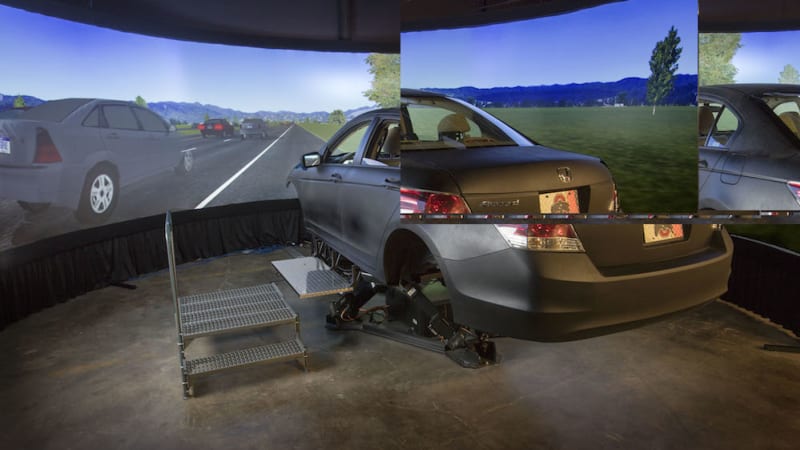 Located in a light-industrial strip of Columbus, Honda uses this facility to test and refine infotainment design and usability and conduct studies on distracted driving. The facility features a wraparound video-simulation monitor and the shell of a 2010 Honda Accord hoisted atop an electronic platform with hydraulic stilts that shift weight in the car and adapt to the simulated highway-driving conditions and driver inputs.

Honda runs between 10 and 15 test projects per year, with each driver at the wheel for between one and two hours being asked to perform driving tasks and operate various tasks using a current-generation infotainment touchscreen and center console.

One lesson the company has learned? “If you’re on a phone call, that your field of vision starts to become smaller. So you don’t see things in your peripheral vision as much as you do in your straight-ahead vision,” said Steven Felt, chief engineer for interior strategy. 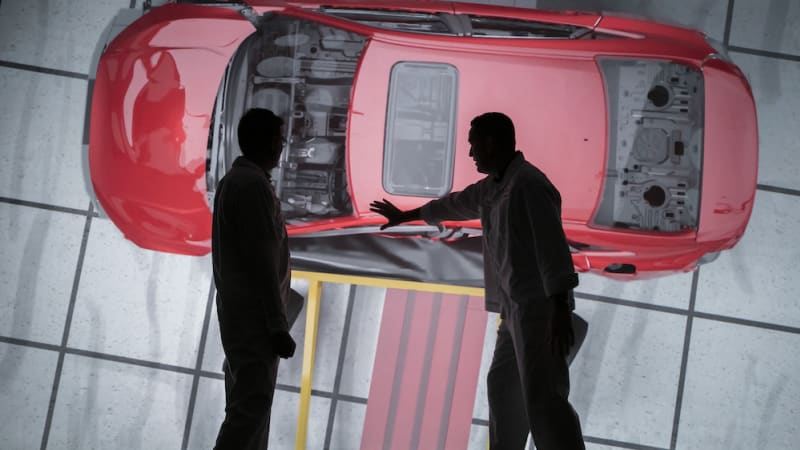 In its “Powerwall” crash simulation lab, Honda uses advanced software to conduct virtual crash simulations, with about 30,000 simulations conducted for every vehicle Honda builds. The software offers the ability to view thousands of different views of a simulated crash, compared to the 10 to 15 high-speed cameras that capture footage of crashes of an actual car.

That helps engineers figure out how to best build cars to withstand violent collisions, and it has led to Honda’s Advanced Compatibility Engineering "ACE" body structure, which uses different grades of steel, plus hot-stamped, low-ductility steel “soft zones” that allow the frame to bend at predictable, strategic points to absorb energy and divert it away from occupants in the cabin.

On the current-generation Honda Civic, for example, soft zones appear on the B-pillars and along both sides of the rear frame. 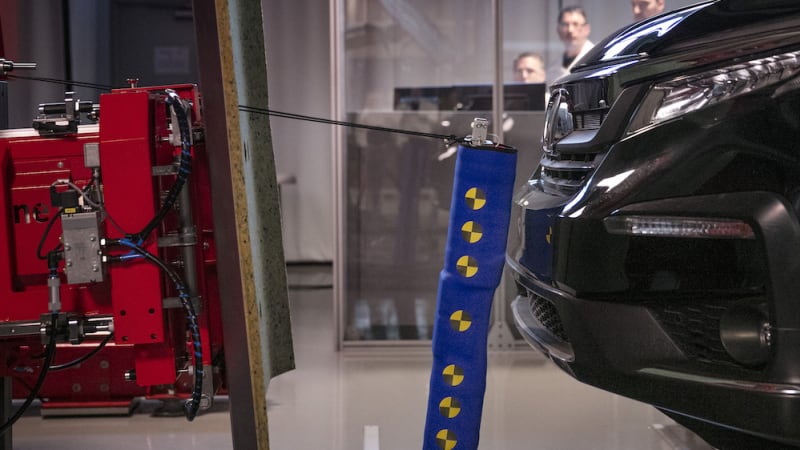 About 16% of all vehicle fatalities in 2017 involved vehicles striking pedestrians, with an additional 2% involving collisions with cyclists. Honda points out that there are no federal regulations requiring automakers to make or test their vehicles to minimize injuries to pedestrians.

Here, researchers drop what looks like a small bowling ball onto the hoods of vehicles to measure the impact of a pedestrian’s head after being struck head-on. They also ram the front bumper in a stomach-churning simulation with an upright, hinged cylindrical object meant to mimmic a leg, to measure tibia bending and affects on knee ligaments. Work at the lab has led to features like energy-absorbing fender brackets and hood hinges, and collapsable cowl structures to minimize injury to pedestrians. 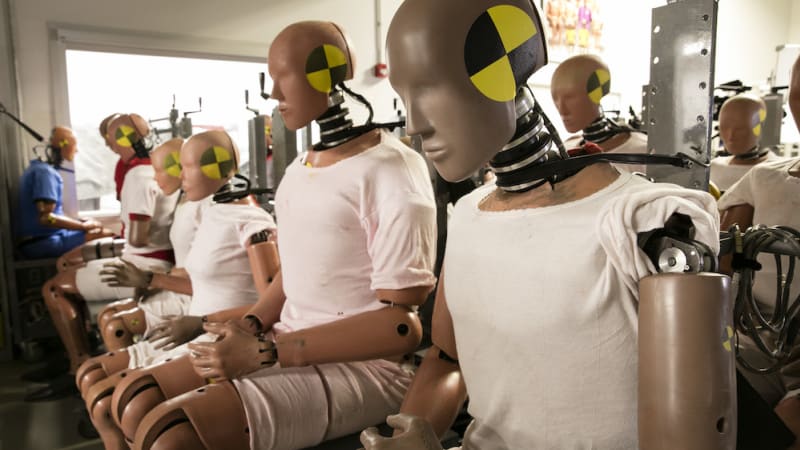 Honda maintains 48 full-scale dummies in multiple sizes, plus male and female versions, all with state-of-the-art biofidelity features to best mimmic the human body and its responses to impact. The most advanced version, called THOR (it’s short for Test Human of Occupant Restraints) is equipped with more than 130 sensors. It costs somewhere close to $750,000, officials said, and was heavily involved in the development of Honda’s new airbag.

Honda performs more than 2,400 tests per year just to maintain the dummies, which help the automaker to measure things like head drop, torso impact and knee impact in crashes. 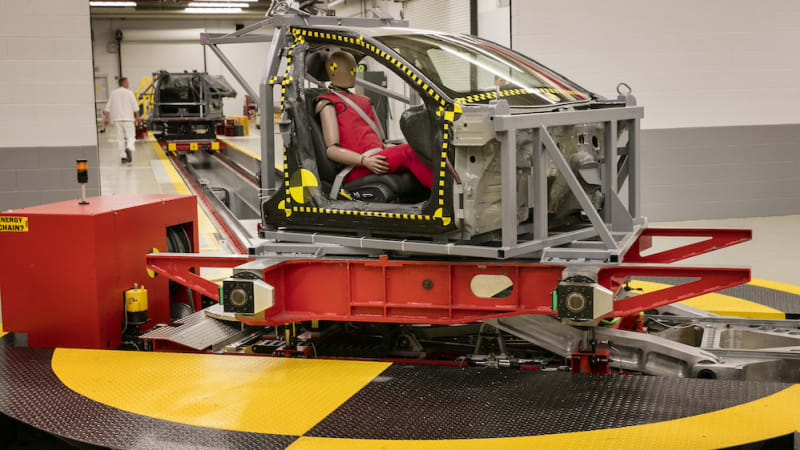 Honda’s "pitching sled," launched in 2002, is truly something to see.

It’s a cage-like vehicle structure built atop a platform that rides on a steel track and is fitted with seats, dashboard, a crash-test dummy and airbag equipment. It allows engineers to tune and verify restraint systems before undergoing full vehicle testing, with about 440 tests done per year.

The system uses nitrogen stored in six large accumulators to pressurize oil and push it through a valve, generating an incredible 555,000 horsepower — the equivalent of eight 747s at takeoff — in a short but powerful burst. Unlike the Crash Barrier lab, there’s no actual collision. Here, the sled is is pushed backward violently in a recreation of the force of rebounding from a crash. 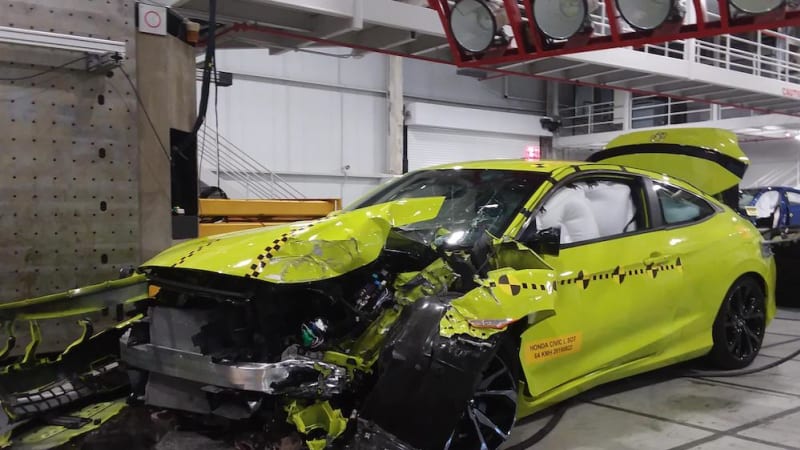 If you’ve ever watched a crash-test video, then this will look familiar. Honda’s crash barrier is a 90 metric-ton rotatable concrete block set on a turntable to conduct a full scale of crash tests of actual vehicles as the final step in verification before production. Honda conducts nearly 225 tests each year, which is nearly one every working day, and spends five days analyzing video of each crash and the smashed car itself after each test. 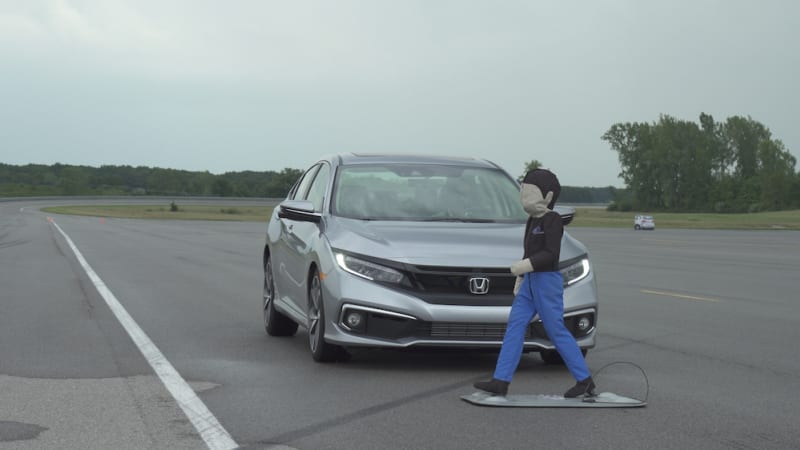 Unlike passive safety systems, which are designed to minimize injury in a crash, active safety is concerned with avoiding the crash altogether. Here, Honda has been working at the Transportation Research Center, which offers a 7.5-mile track and other facilities where it is working to develop or improve technologies like adaptive cruise control, autonomous emergency braking and lane-keeping assistance. Bundled together as HondaSensing and AcuraWatch, the semi-autonomous features first featured in 2014 in the 2015 Honda CR-V and are now available across Honda and Acura’s lineups.

Honda says the suite of driver-assist safety features will be standard across its lineup by 2022.

“Where we’re headed right now is a perfect direction of both active safety and passive safety,” said Brian Bautsch, manager and principal engineer for crash safety. “I think they’re gonna be needed together for quite a while where the passive safety side of what we do heavily relies on some of the active safety systems, being able to dissipate that energy in a potential collision.

“Slowing that car down 5, 10, 15 miles an hour is a huge energy savings and really puts a lot less burden on the passive system.”