Everything you need to know about pricing, specs, performance and fuel economy

The word "Sport" may be part of "SUV," and plenty of them claim to possess sporting credentials of some sort. Dynamic handling! 0- 60 in 5 seconds! That's all well and good, but few actually deliver a truly engaging driving experience that comes anywhere close to a sports sedan or sports car. The 2020 Porsche Cayenne, on the other hand, comes extremely close, besting virtually every other SUV when it comes to being fun to drive. It also offers a diverse selection of models, powertrains and, for 2020, body styles, thanks to the new Cayenne Coupe. Inside, there's easy-to-use technology, sensational build quality and an endless array of customization options (the counter to that is Porsche nickel-and-dimes you a bit on features). So if you're looking for a true sport utility vehicle and you've got the money, the 2020 Cayenne is a very good place to start.

There's a new body style this year: the Cayenne Coupe. It still has four doors, but it has a more rakish "coupe-like" roofline vaguely reminiscent of a 911. It provides a different look some prefer, but it comes at the expense of practicality and a higher price. Also noteworthy for 2020 is the new, range-topping Turbo S E-Hybrid model available in both body styles. This is the hyper-performance model that utilizes Porsche's plug-in hybrid technology to bolster acceleration as much as fuel economy.

Although better than past efforts, the Cayenne isn't as overtly luxurious in materials or ambiance as some may expect for its hefty price point. There are also commonly standard features you have to pay extra for, such as proximity entry and keyless start. Now, the options list can be utilized to rectify both situations (note the especially fancy extended leather interior below), but the price tag will inevitably start moving faster than the Cayenne itself.

That said, fit and finish is up to Porsche's usual exceptional standards, and the design certainly speaks to the Cayenne being different than the norm. The center console rises to meet the downward-sloping dash in a manner that evokes Porsche's sports cars. Apart from toggle switches for certain climate controls and a roller wheel volume control, the center console's various "buttons" are actually touch-sensitive with haptic feedback to confirm that you actually pressed what you intended to. Though such controls have a dubious track record of success, the Cayenne's actually work quite well.

Porsche's touchscreen interface is also exceptional – it's a wide 12.3 inches that's easy to reach and see. The best bit is the customizable home screen, which is divided into three tiles that you can assign to whatever controls or readouts you prefer. You can also subdivide those tiles in half or into quarters to add even more preferred functions and readouts. For example, we put radio presets on the left, radio info in the middle and the navigation map on the right. When using Apple CarPlay, the system automatically hijacks the two left-most tiles, leaving the right-most tile in place. However, there's also a menu gutter always on the left side providing quick access to standard functions like Nav, Media, Phone, Car, Climate and CarPlay. Basically, Porsche allows you to set up the infotainment system the way you'd prefer. That's how it should be. 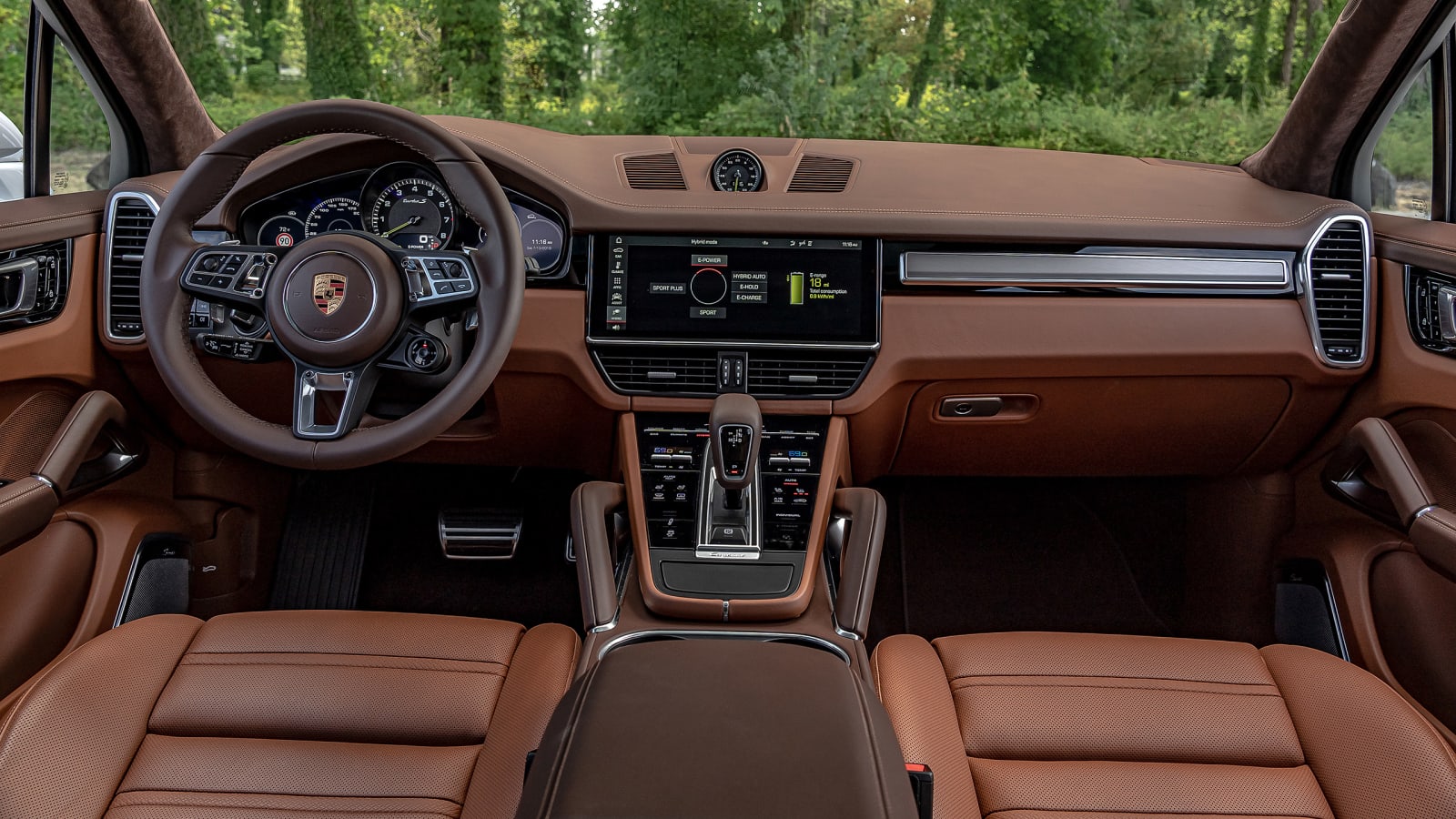 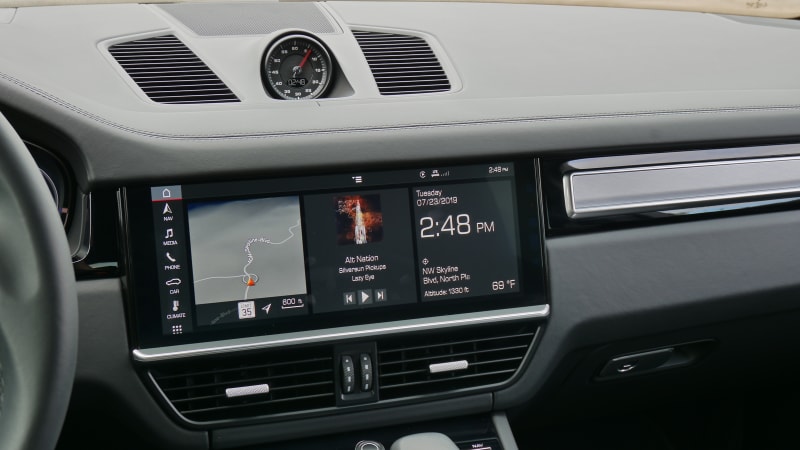 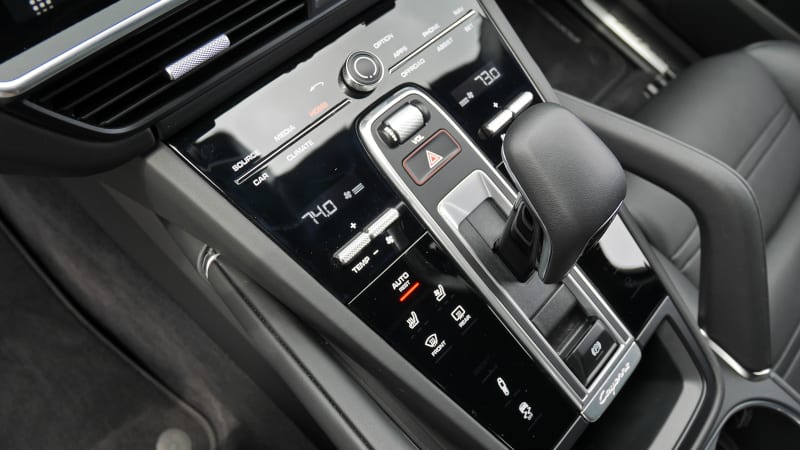 How big is the Cayenne?

For a Porsche, it's huge. For a midsize SUV, it's pretty typical on the outside. Its length and width are comparable to a BMW X5, but it's a little lower in overall height. Its curb weight is much lower, which certainly benefits performance. Inside, Porsche curiously doesn't provide passenger dimensions for either Cayenne, but in our experience driving it, there is sufficient rear seat legroom for a 6-footer to sit behind another. There's also more than enough space for a kid to kick about in their child seat without hitting the passenger up front. That said, we also like that the back seat slides forward to bring kids (or perhaps dogs in harnesses) a little closer to within your reach or to create extra cargo space. That applies to both body styles, but from there the conventional SUV and Cayenne Coupe diverge.

The conventional Cayenne has no shortage of rear headroom, and there is 27.1 cubic feet of space behind the raised third row. That's notably less than the BMW X5 (33.9 cu-ft) as well as the Range Rover Velar (34.4). Its maximum cargo capacity is underwhelming at 60.4 cu-ft, a number that's worse than many compact SUVs. The X5 has 72.3 cu-ft, and the Mercedes GLE more than 80. That said, it is a wide and deep space that gets deeper when you utilize that sliding second row, and it's also superior to what you get with the new Cayenne Coupe.

As for the Coupe, there's noticeably less rear headroom, and cargo capacity is reduced to 22 cu-ft and 54.3 cu-ft, respectively. It's basically just a trunk with a huge opening. BMW doesn't publish the cargo figures for its X6, and Mercedes has yet to do so for its redesigned GLE Coupe (although the outgoing model does have more than the Cayenne). 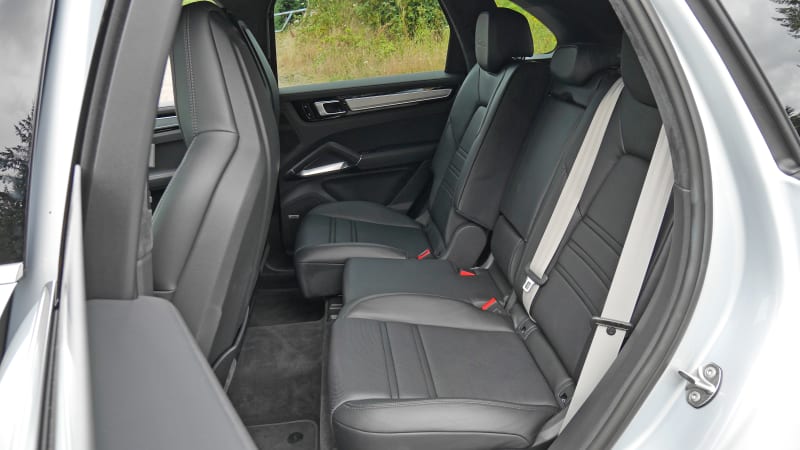 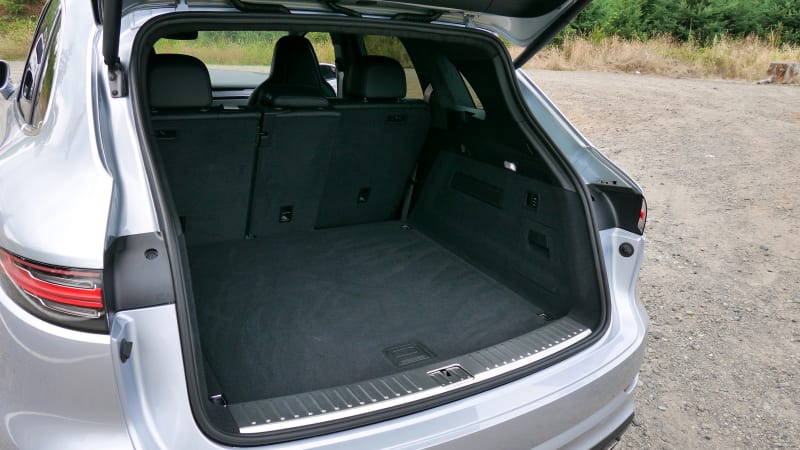 There are five Porsche Cayenne models, all of which correspond to a different powertrain. An eight-speed automatic and all-wheel drive are standard on them all.

The base Cayenne has a 3.0-liter turbo V6 that produces 335 horsepower and 332 pound-feet of torque. Porsche says the base Cayenne will go from 0-60 mph in 5.9 seconds (the Coupe generally shaves 0.2 seconds off the 0-60 time). That's a few tenths slower than the BMW X5 xDrive35i, but still plenty quick. EPA-estimated fuel economy is 19 mpg city, 23 mpg highway and 20 mpg combined.

The Cayenne Turbo has a turbocharged engine like everything else, but ultimately stands out with its 4.0-liter V8 that pumps out 541 hp and 568 lb-ft of torque. Porsche says it'll hit 60 mph in 3.9 seconds. EPA-estimated fuel economy is 15/19/17.

There are then plug-in hybrid models that exist on opposite ends of the Cayenne lineup.

The Cayenne E-Hybrid is a more fuel-economy-focused model, even if it still manages to hit 60 mph in 4.7 seconds. Between its turbo V6 and electric motor, it produces 455 hp and 516 lb-ft. It can go a modest 13 miles on electricity alone, and when its plug-in charge is depleted, it achieves 22 mpg combined when operating as a regular hybrid. The EPA gives it a 46 MPGe rating, but as with every plug-in hybrid, your fuel economy is highly dependent on the type of driving you do. If you have a short commute and can plug in at home, you should save even more gas than the EPA numbers indicate.

The new Cayenne Turbo S E-Hybrid is the new range-topping model that produces a monster 670 hp and 663 lb-ft. Its 0-60 time is 3.6 seconds, so not that much quicker than the regular Turbo (having 600 extra pounds of battery weight is a contributing factor to that), but all its electric torque should make it feel suitably quicker. EPA estimates were not available at the time of this writing, but we would expect them to be lower than the less performance-oriented E-Hybrid and better than the Turbo.

There are two key elements to consider regarding the Cayenne's driving experience. First, acceleration differs greatly depending on the model you get. Second, there are multiple options that can fundamentally change and generally enhance the driving experience. This includes four-wheel steering, a torque-vectoring all-wheel-drive system, Dynamic Chassis Control active roll stabilization, the Sport Chrono package and various wheel upgrades. You can probably skip the Ceramic Composite Brakes, though. Test driving many variations is highly recommended to make sure you're getting the Cayenne driving experience you prefer and to avoid paying for things you're unlikely to appreciate or notice.

Regardless of the model you choose and options you select, it's safe to say you'll be getting one of the most engaging and invigorating SUVs to drive. You don't even need to go extra-legal speeds to realize it. The crisp steering, just-right throttle calibration and the driving position that places every major control exactly where they should be are readily evident when dawdling around town. If you're inclined to performance-oriented, driver-focused vehicles, the Cayenne feels exactly like you think it should. It makes the driving experience that much more interesting regardless of how and where you're driving.

That was the case with a base model Cayenne we tested, as we found its 335-hp engine was amply powerful. On the other end of the spectrum, a Cayenne Turbo with the above roster of options appreciably turned up the speed and capability, further challenging the laws of physics by making a big midsize SUV accelerate and handle like a much smaller sport-tuned vehicle. It's still bigger, taller and comfier than Porsche's cars, though, for better and for worse.

What more can I read about the Porsche Cayenne?

It's down on practicality, but we find the Cayenne Coupe is perhaps more in keeping with Porsche's brand and history. We drive a Cayenne Turbo loaded with nearly every performance enhancement but few luxury frivolities. 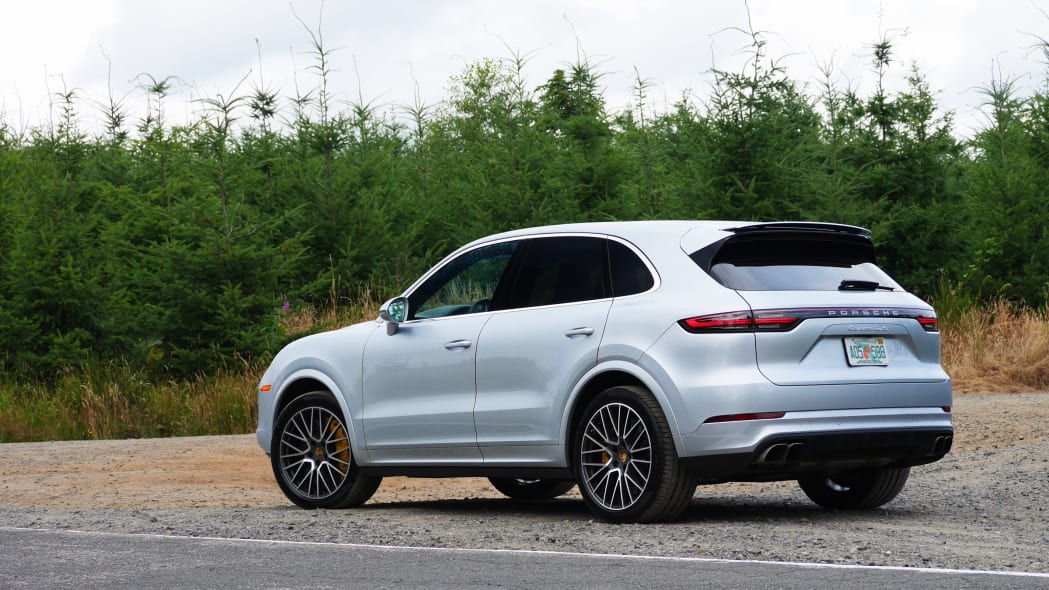 We also tested the opposite end of the Cayenne lineup, finding it a fun ride for a father-son outing. 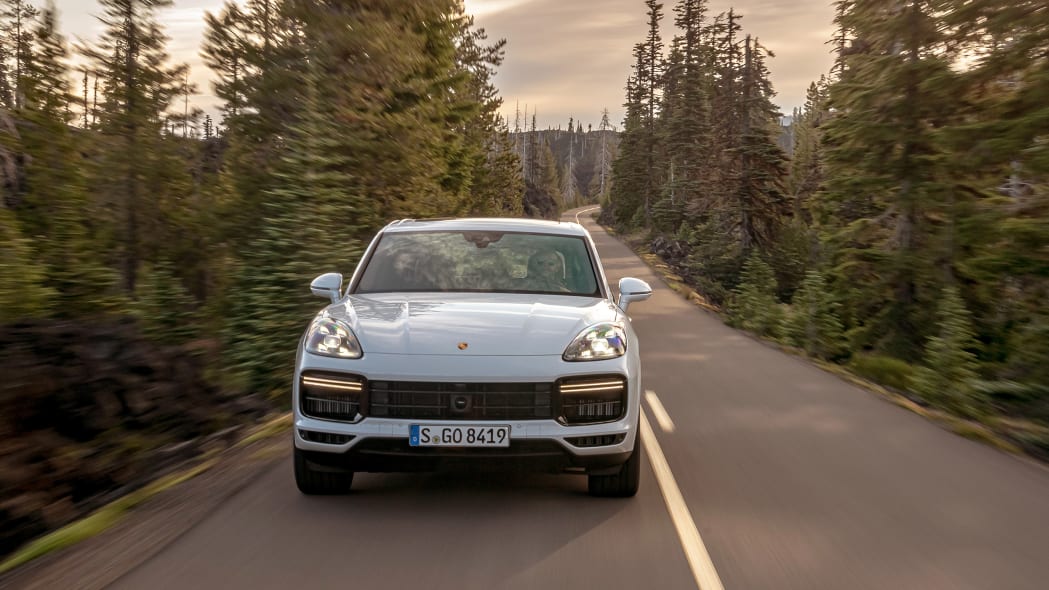 What features are available and what's the Cayenne's price?

Oh boy, if we tried to comprehensibly answer that question, we'd be here all day. You'll find the starting prices for each of the models below, all of which include the $1,350 destination charge. You'll be able to find a full breakdown of their respective features, specs and local pricing here on Autoblog and also here for the Cayenne Coupe. However, note that you generally don't get much equipment for your money with a Porsche, and although its options-intensive ordering structure is conducive to customization, it does skyrocket price tags.

What are the Cayenne's safety equipment and crash ratings?

The Cayenne comes standard with automatic emergency braking, but every other safety tech and driver assistance system is optional. That's not surprising given how Porsche traditionally packages its cars, but it's nevertheless disappointing by today's standards. Lane-keeping assist, blind-spot warning and adaptive cruise control are available as stand-alone options or within the $6,240 Assistance package along with other items.

The Cayenne has not been crash tested by a third party.