BMW's X1 crossover might've stirred the pot among hardcore enthusiasts who think all BMWs are meant to be rear-wheel drive. But despite moving to front-wheel drive for the second generation in 2015, BMW's cheapest crossover went on to become the automaker's top-selling SUV worldwide and the third most successful in the U.S. behind the X3 and X5. To keep the momentum going with its success, Munich's engineers just rolled out a mid-cycle refresh for the X1 for the 2020 model year.

As with most mid-cycle updates, the revised X1 mainly benefits from cosmetic and equipment upgrades. The only mechanical change for the X1 is the ZF-sourced eight-speed automatic, with gear ratio changes and software revisions that BMW says result in smoother shifts and slightly quicker acceleration.

On exterior appearance, the X1 gains some new front-end looks inspired by some of the other recent BMWs. Newly shaped headlights accentuate the outline of the hexagonal quad-headlight setup, the kidney grilles are larger, and a new front lower valance has larger air ducts and a new chrome insert.

The rear sees some minor changes, with redesigned taillights, in which the reverse and turn signal lights are relocated to the bottom of the assemblies, and slightly larger chrome exhaust tips. The M Sport package similarly sees some updates with more aggressive body color-matching front and rear bumpers, side skirts and wheel arch trim.

Complementing the revisions are new color options and wheel designs. The new hues on offer are Storm Bay Metallic, Jucaro Beige, and Misano Blue Metallic. Those looking for a flashback to some classic colors will be sad to learn that BMW dropped Estoril Blue from the X1's palette.

On the inside, the equipment changes are equally as minimal, with the X1's infotainment system still retaining iDrive 6 but getting bumped up from a 6.5-inch to an 8.8-inch screen. The larger screen also gets some new sat-nav software. Rounding it out is a new shifter for that adjusted ZF-sourced eight-speed automatic. 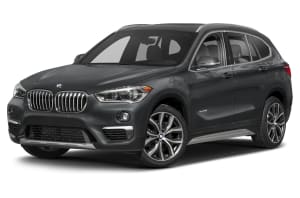