Last September, Mini revealed the Clubman John Cooper Works (JCW). It applied the same general JCW formula used on the regular three-doors to the longest Mini by giving it even sportier suspension and the potent 228-horsepower turbocharged 2.0-liter four-cylinder engine. But from there, Mini gave the Clubman JCW even more torque than other JCW models, and the most of any Mini model, with a total of 258 pound-feet. It also fitted standard all-wheel drive.

On paper, it sounds like the ultimate performance Mini, and it doesn't hurt that it's about the most practical model. So how did it hold up in practice?

First of all, this Mini has a serious weight problem. You might be tired of alarmist auto journalists whining about the increasing size of vehicles, but it's a major issue with this Mini. It actually weighs more than a V6 Chevrolet Camaro. The Camaro weighs 3,435 pounds, and the Mini weighs 3,450. That's for the manual transmission version, too. Our automatic-equipped test car weighed more than that. As a result, it feels noticeably slower than the competition, despite making 228 horsepower and the aforementioned torque.

There's an area in which the Clubman JCW could easily lose some weight, and that's in the all-wheel-drive system. It's a Haldex-style system that only kicks in when the front wheels start to slip, so it's only beneficial for traction in bad weather, not for improving the driving experience by, say, reducing the car's understeer. That's fine for more mainstream Minis, but the JCW line is all about performance and speed, so if the all-wheel-drive system doesn't improve the driving experience, it should simply be dropped to make the car lighter. 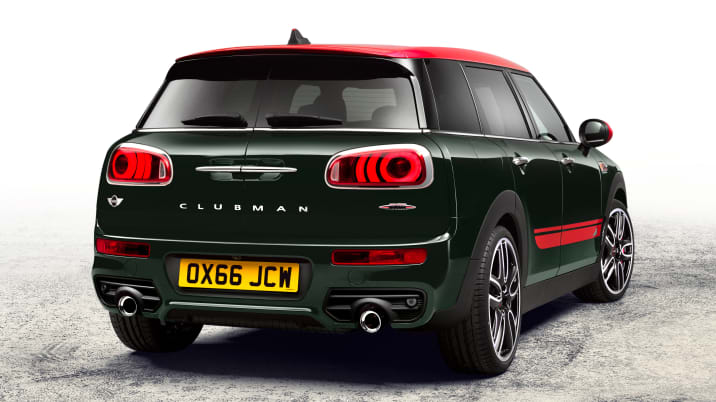 Despite the Mini's prodigious portliness, there are good points. The engine is very smooth, and power comes on almost instantly. In more aggressive driving modes, the exhaust pops and burbles almost every time you lift off the gas pedal. T he eight-speed automatic paired with this engine was equally up to the task. Shifts were fast and smooth. And it even worked well leaving it in automatic mode. It held gears smartly, and it would downshift while braking to ensure you had the right gear when taking off again.

The Clubman JCW also has the brand's trademark corner-carving skills. Body roll is nearly absent in the normal driving mode, and what little was evident is removed when switching to Sport mode. The car responds immediately to each steering input, and it has tenacious grip through corners. You'll get a bit of a workout on twisty roads, too, thanks to the heavy steering, which feels odd in a small car like a Mini, even considering the hefty curb weight. The superb brakes haul the car down fast, and the pedal feel is perfectly firm and easy to modulate. Though at the end of a vigorous backroad drive, I discovered that the front wheels had become a gunmetal color from brake dust, whereas the rears were still silver.

The tradeoff for the great handling is a pretty awful ride. In every driving mode, you'll be kicked and bumped everywhere you go. Even on reasonably smooth roads, it never feels as though the car quite settles down, finding the smallest imperfections to transmit to your backside. The seats are hard, too, so you won't find any relief there. 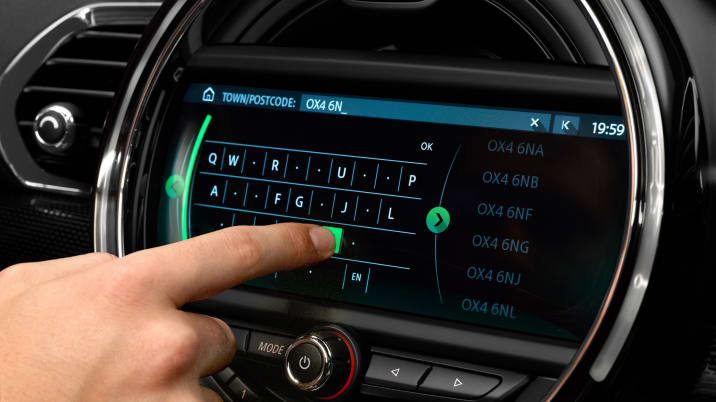 Aside from the hard seats, the rest of the interior is a mixed bag. The panoramic sunroof, diamond-pattern perforations in the leather, toggle switches, and light ring around the infotainment are all fun touches that make the interior a neat place to be. That light ring is particularly cool, as it functions as a makeshift tachometer at times when it isn't showing volume level or temperature settings. The rear seat is still cramped, though, despite this being the longest Mini, and most of the dash and doors are covered in mid-grade plastics.

The Mini Clubman JCW is fun in many ways, but it feels compromised in many more. It's too heavy to feel like a truly spry little hot hatch, and it would be difficult to live with on a day-to-day basis. It also has one more major issue: It's obscenely expensive. The Clubman JCW starts at $35,950, and our test car rang in at exactly $45,000. For just $1,000 more than the Clubman JCW's price, you could pick up a Ford Focus RS, which has about 125 more horsepower and 100 more pound-feet of torque. It's also more practical.

And for the sticker price of our test car, you could buy a BMW M240i with 335 horsepower and rear-wheel drive. It would also have a nicer interior and a prestigious badge. There are a few 3 Series options in this price range, too, if passenger and cargo space were important factors. They can be had with all-wheel drive, too. That being said, if you love the look and feel of the top-rung performance Minis, but need the extra space and all-weather traction, the Clubman is a good way to go.