Is there anything left to see on the 2020 Porsche 911? It seems Porsche isn't even trying to hide the next-gen model, save for some tape to cover up the badges. We've seen nearly every variant of the 992, including the new 911 GT3 earlier today. It's really no surprise, as the new car isn't that far of a departure from the current model, with most of the changes taking place under the skin. Still, it's always cool to get a peek at the new car, and we have some of our best photos yet. 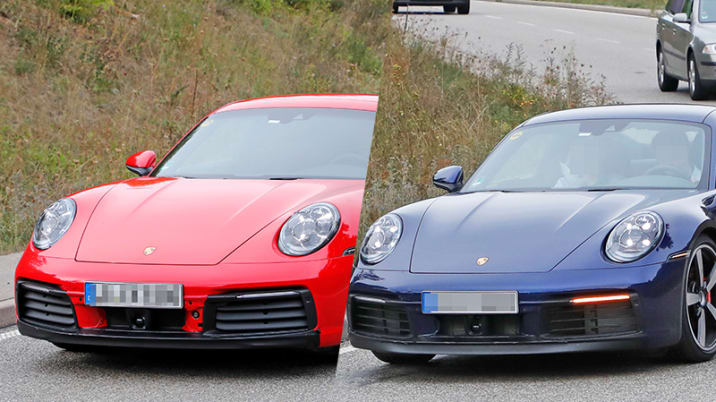 The two cars — a blue Carrera and a red Carrera S — look nearly identical from all but the rear. Both wear the same narrow bodywork, meaning both are likely two-wheel drive versions. The front bumpers both have the same intakes as well as a sensor for some active safety features. If you compare the intakes, it looks like the new 911 will have some sort of active aero, though it's unclear if this is used for performance or fuel economy. The current 911 Turbo uses active aero for improved performance. The front and rear spoilers on the Turbo expand and retract at certain speeds to improve downforce. It looks like the system on the 992 is more akin to active grille shutters, but it's hard to say for certain.

The rear is the only place where the two cars really differ. One has two large exhaust tips while the other has quad exhaust outlets. The red car is also fitted with an optional rear window wiper.

Like the current car, all 911s except for the GT3 are set to be powered by turbocharged flat-six engines. Look for upgraded versions of Porsche's PDK and manual transmissions. Based on what we've seen in other spy photos, the car's interior will draw influence from models like the Cayenne and Panamera with slick center consoles and digital displays in the instrument cluster. Look for a full reveal possibly this auto show season.