We examine the full-size pickup trucks' features, engines and more

Autoblog Staff
The full-size pickup truck market is seriously hot right now. Both Ram and Chevrolet have introduced completely redesigned trucks, the 2019 Ram 1500 and the 2019 Chevy Silverado, and as the companies slowly roll each one out, more and more information comes to light. We've put together this comparison post to help you keep track of all the features and specifications of each of these new models, along with the updated 2018 Ford F-150. Among the stats we'll take a look at are engines, power, fuel economy, trim levels, weight and more.

Both the 2019 Ram 1500 and 2019 Chevy Silverado 1500 have gone on a diet for the new model year, similar to the one the F-150 went on in 2015. The Silverado is the weight-loss leader, having shed 450 pounds when comparing quad-cab V8 models. The Ram 1500 lost 225 pounds compared to the current truck. Both trucks achieve their weight loss in part due to the use of aluminum parts. On the Silverado, the hood, doors, and tailgate are aluminum, while on the Ram, just the hood and tailgate are aluminum on the body. Compare that to the F-150, which uses aluminum for all exterior body panels for a total weight loss of up to 732 pounds, which makes the aluminum-intensive F-150 the weight-loss leader. There's only a bit of overlap in powertrains on the Ram 1500 and Chevy Silverado. Each has a V8 for the top engine. The Ram's is a 5.7-liter Hemi V8 making 395 horsepower and 410 pound-feet of torque. The Silverado will once again use a 6.2-liter V8 as its range topper with the same 420 horsepower and 460 pound-feet of torque as the current model.

Both of these V8s boast some extra fuel saving technology. The Chevy's 6.2-liter (and some 5.3-liters) comes with the company's latest cylinder deactivation system that can shut off any or nearly all of the eight cylinders. The Ram's V8 boasts an optional 48-volt mild-hybrid system that, in addition to likely helping fuel economy, can provide up to 130 pound-feet of torque right off the line. With the Ram, fuel economy sees an improvement of 2 mpg in the city and combined ratings for 17 and 19 respectively. Highway fuel economy improves by 1 mpg to 23 with two-wheel drive and 22 with four-wheel drive.

The Silverado's 6.2-liter V8 only improves city fuel economy by 1 mpg to 16, and actually loses 1 mpg on the highway. The new 5.3-liter engine with the fancy cylinder deactivation does see an improvement over the simpler version. The two-wheel-drive version jumps up 2 mpg in the city and combined areas to 17 and 19 respectively, and highway fuel economy increases 1 mpg to 23. The four-wheel-drive model just increases by 1 mpg across the board.

The Ram and Chevy' powertrains diverge with the lower-end gas engines. Ram offers a 3.6-liter V6 making 305 horsepower and 269 pound-feet of torque, and it comes standard with the 48-volt hybrid system, though in that application it only produces up to 90 pound-feet. This updated V6 is the second most efficient gasoline-powered full-size pickup, returning 20 mpg in the city, 25 on the highway and 22 in combined driving.

Chevy has two entry-level engines now. The 4.3-liter V6 effectively carries over, featuring the same 285 horsepower and 305 pound-feet of torque. It also has a version of the current cylinder deactivation system that can shut off two of the six cylinders. The other entry-level engine is an all-new 2.7-liter turbocharged four-cylinder making 310 horsepower and 348 pound-feet of torque. V6 fuel economy hasn't been announced, so the four-cylinder is the most economical engine available on the Silverado by default. It manages 20 mpg in the city and 23 on the highway.

Ford also has two low-end engines. One is a naturally aspirated 3.3-liter V6 that makes 290 horsepower and 265 pound-feet of torque. The other is a turbocharged 2.7-liter V6 making 325 horsepower and 400 pound-feet of torque. Properly equipped, the 2.7-liter engine is the most efficient gasoline powered fullsize truck with 20 mpg in the city, 26 on the highway, and 22 combined. A different version of the truck drops down 1 mpg in all categories.

Ford and Chevy each offer V8s in the middle of the engine lineup, too. Ford uses a 5.0-liter V8 that makes 395 horsepower and 400 pound-feet of torque. The Silverado gets a 5.3-liter V8 with 355 horsepower and 383 pound-feet of torque. Depending on the trim level, Chevy V8 can be had with either the current cylinder deactivation system that shuts off four cylinders, or the more advanced system featured on the 6.2-liter engine. To see which engine is available with which Silverado trim level, we've created a handy chart.

For the first time, all three of these full-size pickups will be offered with diesel engines. Chevrolet announced it would offer a 3.0-liter inline-six diesel, but has yet to reveal any other specifications. The Ford F-150's Powerstroke 3.0-liter makes 250 horsepower and 440 pound-feet of torque, so expect the Chevy engine to be in that ballpark. Ram says that the EcoDiesel 3.0-liter V6 will return, but no details were given. The current model makes 240 horsepower and 420 pound-feet of torque, so the new version will probably be close. Only one company has announced any fuel economy numbers for its new diesel engine, and that's Ford. The company said the F-150 should hit 30 mpg on the highway, 22 in the city, and 25 combined. The current diesel Ram 1500 manages 27 on the highway, 20 in town, and 23 combined. For the 2019 model year, Chevrolet has created a tough off-road variant to match the Ram Rebel. It's called the Trailboss. It goes a step beyond the regular Z71 off-road package, but includes that package's features. It comes with a locking rear differential, skid plates, Rancho shocks, a two-inch lift, and off-road tires. And of course, the Trailboss looks more aggressive with a black front fascia.

The Ram 1500 Rebel continues for 2019. In contrast to the Chevy Trailboss, the Rebel only gets a one-inch suspension lift. But like the Trailboss, it has a locking rear differential, skid plates and off-road tires. The Rebel also gets hill-descent control and upgraded shocks, but from Bilstein instead of Rancho. The Rebel can come with air suspension, too. And the Rebel will continue to get a unique black grille and bold Rebel badging. Between the two, it's probably up to your preference of style and brand.

Still, neither of those really stack up against the Ford F-150 Raptor, the king of full-size off-roaders. The Raptor is powered by a high-output version of the 3.5-liter EcoBoost V6, good for 450 horsepower and 510 pound-feet of torque. In addition to the bump in power, the Raptor gets beefy tires and wheels, Fox shocks, wide fenders and more. Ram has had a death grip on the lockable in-bed storage market with its RamBox, and that feature continues on the new model, but sees new competition from Chevrolet. The RamBox continues to work the same as it always has, fitting storage containers into the bed sides with lockable lids on the tops of the bed sides. On the Silverado, there are now available in-bed cargo boxes. They sit above the wheel arches and seem to take up similar space as RamBox, but they appear to be removable and not to require a special bed. The F-150 doesn't come with any lockable storage in the bed.

The Silverado seems to be the king when it comes to cargo capacity. The new truck bed is 6.75 inches wider than before and, thanks to taller fenders, is deeper, too. Still, it's not like the Ram or F-150 lag behind. It's small differences between the three models, though we'll have to wait for full specs to really compare.

All three trucks feature spacious, well-appointed interiors. For a while, the F-150 was the clear class leader, but it was also the newest. Now it seems like a tossup. For 2019, the Ram and Silverado appear to be an evolution of what came before. The design is clean and rugged, with large controls that should be easy to use while wearing work gloves. There are plenty of small pockets and cargo bins throughout the cabins. The Ram in particular stands out with a truly massive center console.

The infotainment is a tossup between the three, but once again Ram takes the cake on size. Upper trim models get a new 12-inch infotainment display that would give Tesla a run for its money. Still, the new Silverado and F-150 run on the latest iterations of Chevy MyLink and Ford Sync. All three have a number of USB ports for both charging and connectivity sprinkled throughout. We've finally had the chance to sample all of these trucks for varying amounts of time, so we can bring you some initial impressions about the trucks. The 2019 Ram 1500 has become a fast favorite in the office thanks to sharp steering, great all-around refinement, superb infotainment, and a charming burbly V8 engine. The only question mark left is how the V6 and V8 with the 48-volt hybrid assistance are, since Ram has yet to launch them and provide examples for testing.

As for the Silverado, we've had a couple of opportunities to drive the truck. Most recently, we tried out a few variations of the V8-equipped models. The truck overall feels very solid, is quite roomy and practical, and has some solid off-road capability. Unfortunately, the interior could use some serious polish. We've also had a brief amount of time behind the wheel of some pre-production prototypes to try out two of the new engines, the 2.7-liter turbocharged four-cylinder, and the updated 5.3-liter V8 with its elaborate cylinder deactivation system. The four-cylinder's acceleration and throttle response are impressively capable, but it did exhibit some classic four-cylinder thrashiness. The V8 is as smooth as ever, perhaps more so, and you can't tell what cylinder modes it's in. As for the rest of the truck, the driving position is improved, and the steering is light, quick and tight.

The one truck we know everything about is the F-150, since its biggest update is the diesel engine. And we quite like that engine. It's torquey, refined, and delivers impressive fuel economy. We've had a chance to test the Power Stroke's towing capability in an F-150 Platinum and its payload in an F-150 King Ranch. The gasoline turbocharged V6s, from the 2.7-liter to the high-output 3.5 in the Raptor, all are impressive performers, and even the 5.0-liter V8 still pulls hard. We're not totally won over by t he 10-speed automatic, though, and some editors aren't thrilled with the interior. 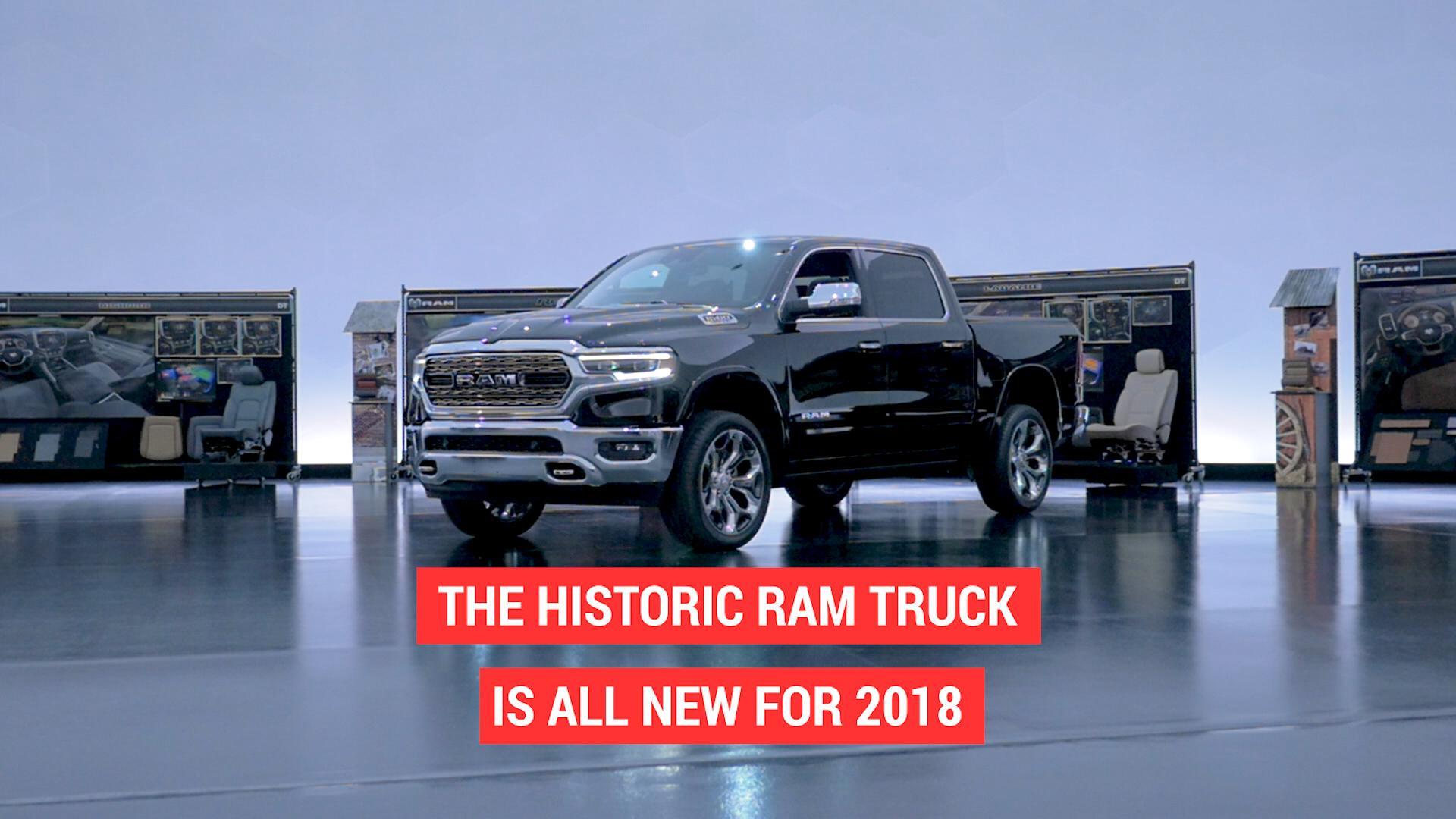