It seems like every other truck commercial includes a shot of some random heavy thing being dropped into a pickup bed: rocks, hay bales, giant novelty weights. Denis Leary is usually talking, or Bob Seger singing. That the truck in question doesn't collapse like a hot marshmallow under the strain is presumably meant to prove it's not a wimpy truck for wimpy guys who can't get girls. Truck, tough, grr.

Well, with commercial logic in mind, we can report the 2018 Ford F-150 King Ranch with the new Power Stroke diesel engine option is not wimpy. Even when resplendent in its extra chrome trim and stuffed with a Lincoln's worth of luxury upgrades like massaging seats, the fancy-pants King Ranch proved its tough-truck worth as a front-end loader dumped a half-ton of river rock into the bed. The resulting cloud of dust caught the searing midday sun. I remember it now in slow motion, as if living through one of those commercials. Yup, that's a tough truck.

After Senior Editor Alex Kierstein put a 2018 F-150 Platinum and its new Power Stroke V6 to the tow test, it seemed worth the effort to test the hauling capabilities while also sampling a different range-topping variant. Though the equipment levels of the Platinum and King Ranch are comparable, the King Ranch is, well, more ranch-y in its styling elements. The earthy, rust-colored two-tone interior accented by multiple King Ranch squiggle logos (a replica of the actual ranch's cattle brand) remain from earlier versions, but everything is toned down and classier inside and out. The real open-pore wood trim is lovely. I'm actually a big fan of the overall vibe despite not exactly being a belt-buckle, cowboy-boot kinda guy. 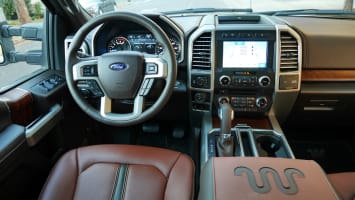 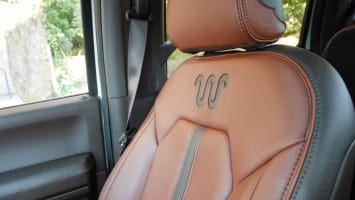 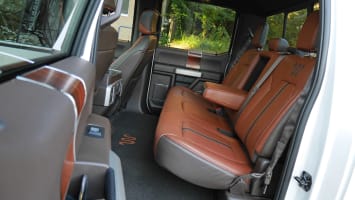 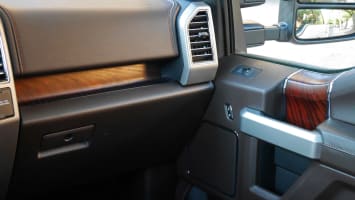 The new Power Stroke diesel engine is a 3.0-liter V6 built in Britain and related to a number of Jaguar/Land Rover products, including the Range Rover and Discovery. "Related" is the key word, as Ford changed the turbocharger, fuel injection system, connecting rod and main bearings, oil pan and crankshaft to make "Power Stroke" more than just a sticker attached to the engine cover. The end result is a diesel mill that produces a stout 250 horsepower and 440 pound-feet of torque.

As Kierstein noted, this is an astonishingly quiet application of a diesel engine. Heck, it's an astonishingly quiet engine/truck pairing, period, regardless of fuel. You can occasionally hear a tell-tale turbodiesel whine when the Bang & Olufsen sound system is muted, but the expected diesel roar is never there. You have to roll the windows down for that, and even then, it's not exactly Peterbilt in its decibel level.
Paired to Ford's new 10-speed automatic, the Power Stroke is smooth and responsive, and not especially diesel-like in its drivability, either. Clearly, this engine was meant to provide the capability and fuel economy (22 mpg combined as equipped) of a diesel engine without the negative side effects that might otherwise shoo people away. Job well done.

As for its hauling capability, the F-150 Super Crew 4x4 has a payload of 1,720 pounds with the Power Stroke. This means I was essentially maxing the truck out with the river rock. I don't have an exact weight of the load, but knowing the basic volume-to-weight measurements indicated I was definitely in the 1,700-pound ballpark.

So loaded, there was a slight stutter from the transmission when accelerating from a stop. Presumably this was between the 1-2 shifts, and it almost felt like a driver failing to apply enough throttle when driving a manual transmission. All other shifts were fine, and this was the only indication from the powertrain that we'd just dropped a 1996 Lotus Elise worth of rock in the back. There was no straining from the engine, it just hauled without fuss. 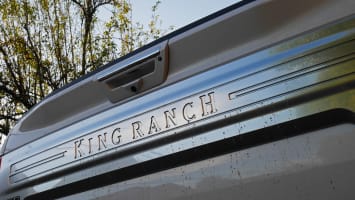 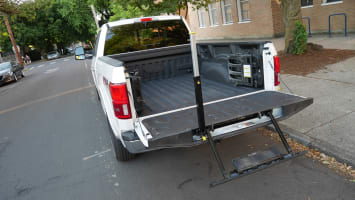 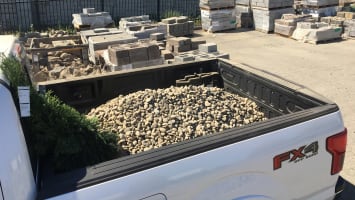 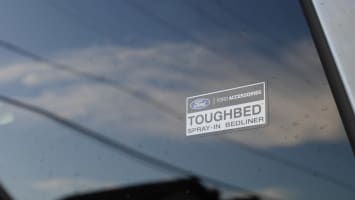 Moving beyond the powertrain, loading up the bed settled down the rear end and therefore improved the ride. When unloaded, the F-150's leaf-sprung rear end isn't as good as the coil sprung 2019 Ram 1500's. The steering also became lighter, but again, that's to be expected, and actually remained vastly better than the at-times spooky steering of past pickups.

Fitted to the test truck was the $495 spray-in Tough Bed bedliner option, which is absolutely worth the expense. Though I put down thick plastic sheeting to protect it further, it was no worse for wear after being emptied, swept and hosed out. Impressive. Careful piloting by the front-end-loader operator meant the military-grade aluminum bed exterior remained untested (though it probably would've handled it well).

I also had the opportunity to utilize the F-150's "man step" or whatever it's officially called, once again finding it to be a must-have feature. Despite Chevy's sour grapes ads about it, you're not a wimp for using it — it makes getting up to and out of the bed easier, but it also makes for a quicker and therefore more productive working experience. My 5-foot-0 wife was especially grateful for its existence. A guy in the Home Depot parking lot stopped me to note it was a great feature. So there. 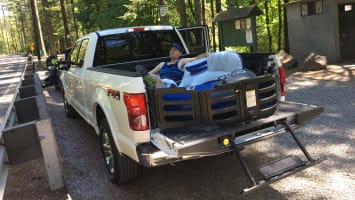 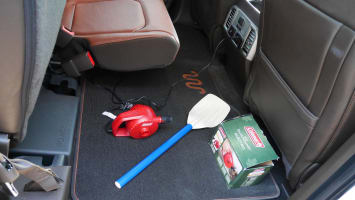 With the bed painstakingly unloaded, it was soon thereafter repurposed for a considerably lighter hauling task: a two-person river-floating inner tube. The reasonably priced $250 foldable bed-extender proved handy as it did its job extending the Super Crew's 6.5-inch Styleside bed to accommodate the raft, and therefore make it possible to transport it to the Washougal River inflated. Good plan in theory, except our friends' tubes still needed to be inflated and with the F-150's two house-style electric outlets aboard, a quicker, more powerful compressor could be used while still having an extra outlet available for a blender or hair dryer or some manly thing. Belt sander, sure, that works.

So whether using it as Denis Leary would narrate, or like a pampered city slicker who needs a $74,295 King Ranch to occasionally haul an oversized inner tube to a river, this F-150 got the job done. It's definitely not wimpy. Neither is the Power Stroke, but after crunching the numbers, the ad men may need to work some magic.