The Trail Boss is our top pick, but it needs a nicer interior

The life of a fullsize pickup truck used to be easy. Not because the workhorses weren't put to the test, pulling trailers, hauling loads, and schlepping through the mud, but because they were tools expected to perform one specific job. These days, pickup owners expect a lot more from their trucks and are just as obsessed with the grain of their leather interior as they are with a class-leading spec sheet.

It's into this quagmire of disparate necessities that Chevrolet launches the 2019 Silverado. Like its competitors — specifically the Ford F-150 and Ram 1500 — GM's latest fullsize truck has to be all things to all people. A commuter during the day, a luxury car at night, and a competent weekend warrior when it comes time to work and play. After spending some time with the 2019 Silverado, we think Chevy has done a pretty good job with its latest pickup. We fully expect that it will remain a strong seller that generates a steady stream of profit for the Bowtie. But not all is perfect in Silverado-land.

The 2019 Silverado is available in eight trim levels, starting with the most basic Work Truck for $31,290 and culminating in the leather-clad High Country for $55,990. The LT level is the bread-and-butter of the lineup, with a traditional exterior look highlighted in chrome and an interior that features an eight-inch touchscreen and optional leather seats. New models for 2019 are the $41,790 RST and $42,490 Trail Boss.

The 2019 Chevy Silverado RST is meant to appeal to the performance crowd with nearly all bits of chrome from the LT replaced with body-color trim. The monochromatic look works pretty well in bright shades and in black, but less so in light colors and white. We'd consider the optional 22-inch wheels a necessity to complete the muscle-truck look. Unfortunately, there isn't any actual added performance from the RST over any other Silverado. 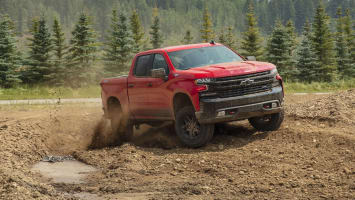 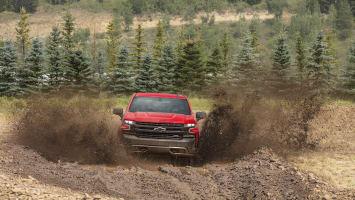 Much more interesting is the new 2019 Trail Boss, which is available as a package on the lower-cost Custom trim or the more fully featured LT trim. The LT Trail Boss starts at $48,890, and our optioned-up tester carried a $54,930 window sticker. With a blacked-out face punctuated by a beefy red pair of tow hooks, the Trail Boss is a ruggedly handsome truck. The Z71 Off Road Package comes standard on the Trail Boss, but the big selling points are the factory-installed two-inch suspension lift, Rancho shocks, and skid plates.

We spent most of our time with the LT Trail Boss, both on and off road. And when we got a crack at the makeshift off-road course that Chevrolet created using a backhoe, a truck full of logs, several tons worth of boulders, and, most important, a dedicated water truck, we didn't take it easy. You can see the results in the photos above, but what they won't show you is how solid the Trail Boss felt through all of these tests. And by the time we buckled ourselves into this particular truck, it had already made several hundred passes through the obstacle course and felt no worse for the wear — we listened carefully for squeaks, rattles, or any other indication that the truck was faltering after so much abuse and found none at all. That's a good sign for long-term durability.

Our Trail Boss was powered by the latest version of Chevy's tried-and-true 5.3-liter V8 engine. Two versions of this engine are available for 2019, and both of them churn out 355 horsepower and 383 pound-feet of torque. The first of these V8s carries over from the previous Silverado, is mated to a six-speed automatic gearbox, and features Active Fuel Management, which allows the V8 to run on four cylinders under certain circumstances.

The second 5.3 is hooked to an eight-speed automatic and benefits from a new technology called Dynamic Fuel Management that continuously shuts cylinders on and off as needed. GM says it fires on fewer than eight cylinders more than 60 percent of the time. And it all works seamlessly. We couldn't tell how many cylinders were firing while we were driving, and when we asked for full steam ahead we got it without delay. The EPA estimates the new 5.3 will deliver 17 miles per gallon city, 23 highway, and 19 combined. Depending on equipment, the 2019 Silverado with this new 5.3-liter V8 can tow as much as 11,600 pounds. 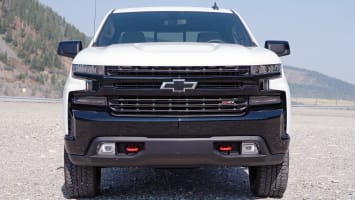 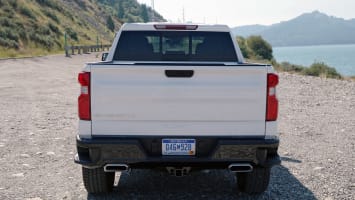 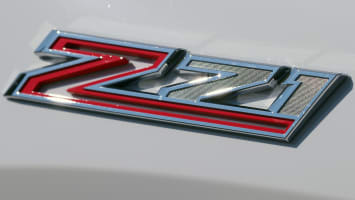 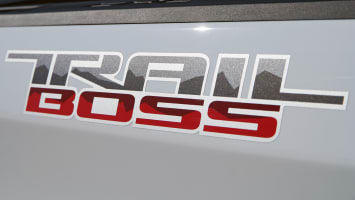 We also took a spin in an LTZ powered by Chevy's optional 6.2-liter V8, which for 2019 is hooked to a 10-speed automatic and is available only with four-wheel drive. With 420 hp and 460 lb-ft, this is the engine that allows the Silverado to tow its maximum rating of 12,200 pounds. From behind the wheel, the 6.2 and 10-speed feel a bit more sprightly than the smaller 5.3 V8. The 6.2 also gets GM's newfangled DFM technology, and it has EPA estimates of 16 city, 20 highway, and 17 combined.

If you want a Chevy truck with the absolute highest payload rating, you're going to need to choose the standard 4.3-liter V6, which can haul 2,500 pounds. With 305 horsepower and 285 lb-ft, base Silverado models can also tow as much as 8,000 pounds. A new 2.7-liter turbocharged four-cylinder that we didn't get to test will start hitting dealerships a little later this year.

Now would be a good time to mention that none of these towing or hauling figures are class-leading. The latest Ford F-150 can tow as much as 13,200 pounds with its 3.5-liter EcoBoost V6 and boasts a max payload rating of 3,270 pounds with a 5.0-liter V8 engine. F-150 models equipped with Ford's 2.7-liter turbocharged EcoBoost six-cylinder engine (which matches up against Chevy's 5.3-liter V8) have EPA estimates as high as 22 city, 26 highway, and 22 combined.

A good bit of credit for Ford's class-leading tow, payload, and efficiency ratings can be attributed to its aluminum-intensive architecture, which saves weight compared to steel. Chevrolet has gone down a somewhat different path with the 2019 Silverado, choosing to use lightweight aluminum for certain exterior panels while sticking with various grades of steel everywhere else, including the pickup bed. That means while Chevy wasn't able to cut quite as much weight as Ford did several years back with the F-150, a 2019 Silverado Crew Cab is still about 450 pounds lighter than the outgoing truck. And, since steel construction is cheaper than aluminum, it also means that Chevy can likely pocket a bit more profit from each Silverado sale than it could if it dove more fully into lightweighting measures. 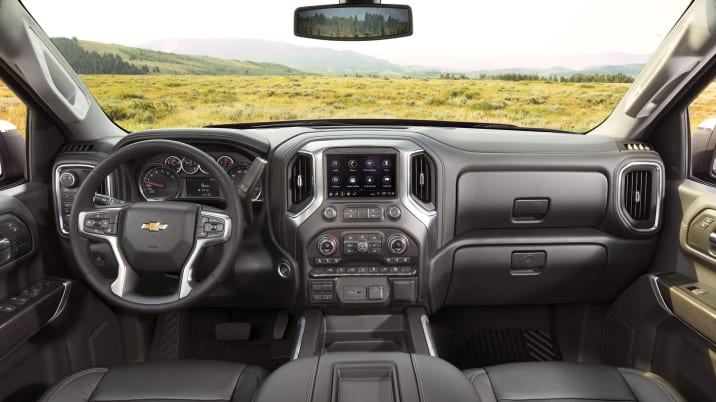 The most glaring deficiency of the 2019 Silverado is its interior, which just isn't up to snuff compared to the most recent Ford and Ram offerings. A seven-inch infotainment system that includes Apple CarPlay and Android Auto is a welcome piece of standard equipment, and optional bits like the segment's first head-up display, a surround-view camera setup and a rear-camera mirror are nice touches. But none of the materials have a premium feel, and the trim — faux wood in some models, an odd cross-hatch in others — looks cheap. Even the most expensive High Country, which replaces the aluminum-painted surround of the center stack with a bronze-painted surround, lacks the polish of Ford's Platinum and Limited trim levels. And there's no show-stopping technology centerpiece like Ram's vertically oriented 12-inch touchscreen, either.

Partly atoning for the lack of pizzazz is a focus on practicality. Chevy's engineers added 3.9 inches to the wheelbase of the 2019 Silverado versus the old truck. From the outside, the 2019 is 1.2 inches wider, 1.5 inches taller, and 1.7 inches longer. All that extra space adds up to a cabin that feels more roomy than the last Silverado, especially the rear seat with its 43.4 inches of leg room (a 3-inch improvement).

Just as important, Chevy was able to equip the 2019 Silverado with the largest truck bed in the segment. Compared to the last Silverado, the short bed increases from 53 cubic feet to 63, the standard box swells from 62 to 72, and the long box goes from 75 to 80. There are also 12 fixed tie-down points in the bed, each of which is rated to hold 500 pounds, up from the 250 pounds of the old truck. Accessing all that space in the bed can be made easier by a power-operated rear tailgate, but only on LTZ and High Country models. 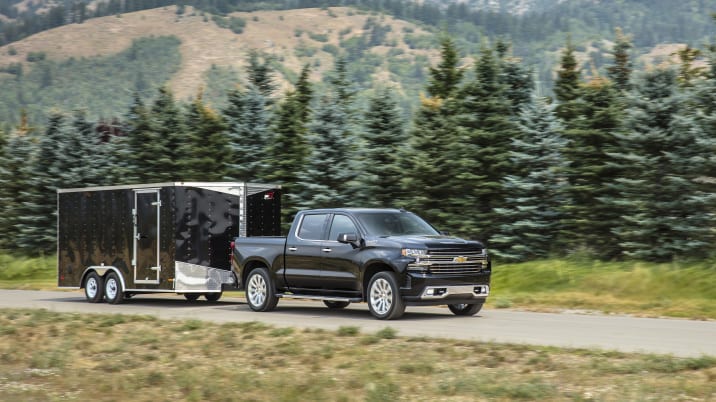 Out on the road, the 2019 Silverado behaves just as you'd expect from a modern pickup truck. The ride is solid and, considering the capabilities, pretty comfortable. The live axle at the rear causes some expected sidestepping at highway speeds over angled bumps and dips. We didn't expect much steering feel from the Silverado, but were pleasantly surprised by the slight tightening up of the wheel when the truck is switched into Performance mode using a knob on the upper left side of the dashboard. Performance mode, which is new for 2019, also adjusts the programming of truck's transmission for a slightly sportier feel.

We towed a 6,000-pound cargo trailer with a Silverado LTZ powered by the 6.2-liter V8. As you'd expect, considering that this weight wasn't anywhere near the maximum load the truck is capable of pulling, the Silverado basically just shrugged off the test. Even if we didn't have the chance to push the truck to its trailering limit, we did appreciate Chevy's latest suite of towing aids. Buyers can option up to four cameras to help line up a truck and its trailer, including one pointed straight down at the hitch. An app in the Silverado's LCD screen monitors the temperature and air pressure of the trailer's tires in real time, and it can also connect to a smartphone to conduct a trailer light test while the driver is outside of the vehicle. Up to five trailer profiles can be remembered by the app, and it will remind the owner of each trailer's regular maintenance needs. 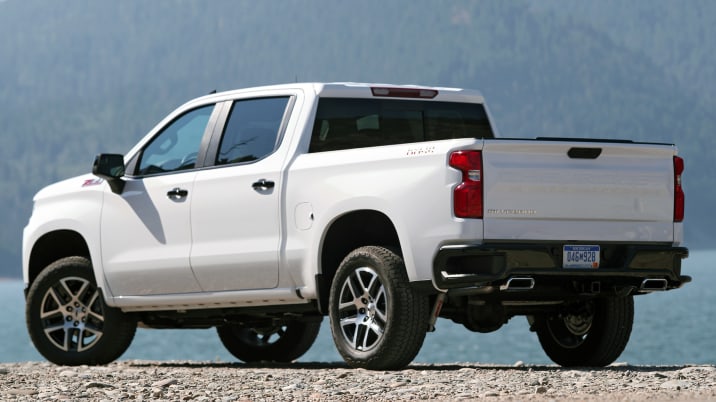 Targeting the heart of the pickup market by offering lots of mid-level choices is probably a smart play for Chevrolet. We really like the Trail Boss package, and appreciate that it's available at the lower-cost Custom or the more fully featured LT trim. A larger cabin, a bed that's 20 percent larger than before, a 14 percent improvement in payload capacity, a 5 percent gain in tow ratings, and a 5 percent increase in fuel efficiency are all welcome steps in the right direction. But none of the towing, payload, and fuel efficiency figures are enough to beat the Silverado's main competitor, the Ford F-150, despite Chevy having several years to catch up. Plus, the lackluster interior and the lack of a true luxury package are missteps that we can't overlook.