"Citroën: The Man, The Marque, The Mystique." As an American, it's easy to fall in love with automotive history and never spend a moment thinking about France. After all, we've got Ford, and General Motors. And Auburn, Checker, De Soto, Duesenberg, and Hudson. Packard, Studebaker, and Tucker, too. And then there are the people who made those companies what they are, mavericks and visionaries of myriad backgrounds. We got lucky. But let's not falsely assume that we were blazing the trail towards personal motorization alone.

One of the more influential and interesting countries in the early days of the autocar was France. Not only did France crank out some of the most beautiful cars of the era, but they dominated racing and excelled at engineering. A few you might've heard of: Bugatti, Voisin, Delahaye, Talbot-Lago, Renault, and, of course, Citroën.

While every carmaker has its stories, the history of Citroën is the stuff of legend. Groundbreaking vehicles, pioneering technologies, and the man himself, André-Gustave Citroën. Citroën the man in part responsible for mass producing and bringing steel double-helical (herringbone) gears into the industrial age where they were used on the Titanic and served as the inspiration for Citroën's logo. He was also the visionary and driving force behind using the Eiffel Tower as advertising. For nine years between 1925 and 1934, 250,000 lights were employed to write "Citroën" down a side of the overhyped easel. Even the name Citroën has an interesting story. When his grandfather graduated from selling fruit under the surname Limoenman in Amsterdam to moving jewelry, he changed his name to Citroen, Dutch for lemon.

And that's just a glimpse of why we're here today. And that's why, smack in the middle of an industrial park in Oxnard, California, Peter Mullin has dedicated his museum, The Mullin Automotive Museum, to Citroën until Spring of 2018 with "Citroën: The Man, The Marque, The Mystique". 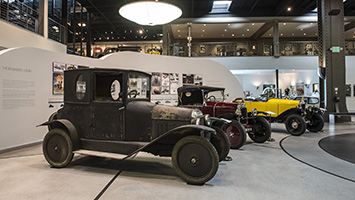 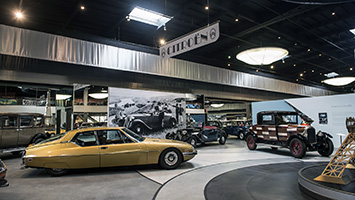 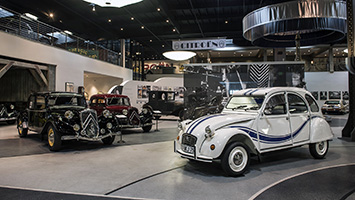 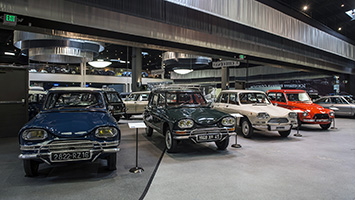 With photographer Drew Phillips in tow, we visited the museum for a docent-led tour the day we were scheduled to drive a lovely 1969.6 Citroën DS. Below are some highlights.

1919 Citroën Type A: Citroën's first car. Literally. Production number 1. At a time when European carmakers were selling bare chassis waiting to be shipped off to coachbuilders, Citroën went ahead and sold the whole car.

1952 Citroën 2CV: Produced from 1949 to 1990 (yes, 1990), the 2CV story is well known. It was designed to be inexpensive, big enough that the driver could wear a hat, and compliant enough that the car could be loaded with eggs and driven through a field with no breakage. While there was significant demand for the 2CV, preference was given to farmers, midwives, doctors and veterinarians — especially artificial inseminators. This particular example has a 9 horsepower, two-cylinder engine. 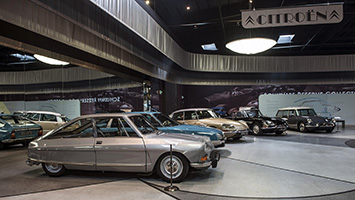 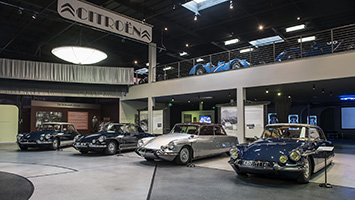 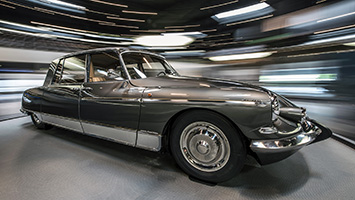 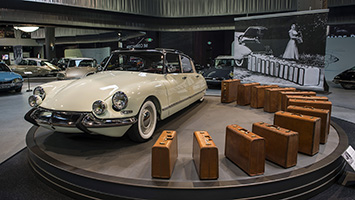 1966 2CV Sahara: One of only 25 Saharas left, this car features all-wheel drive by way of two motors. A 425 cc flat-twin sits at each end of this DS and a fuel tank sits under each of the front seats. Somewhere a NHTSA dork suffered a minor stroke.

1957 Citroën DS19 Berline: You know we loves us some DS. There's nothing crazy with this DS, it's simply a near-perfect, 30,000 mile history lesson.

1973 Citroën DS23 Prestige: One of a handful of coachbulit DS's via Henri Chapron, think of this car like the Maybach to the normal DS's S-Class but with an even better interior.

Of course, there are more. More DSs, SMs, prototypes, prototypes with rotary engines, art, historical photographs and fantastically detailed info plaques for every car. The people behind the Mullin geek out over the details.

The Mullin should be on every car-person's list of must-visit attractions. The care and detail put into every aspect of the museum — the cars, the lighting, the facility, the organization, the art, the information, and brilliant docents — is unparalleled. For this exhibit, Mr. Mullin purchased each of the 48 Citroëns on display specifically for this reason. This museum is a labor of love and fanatical respect for history. In truth, it feels less like a car museum and more like a private art collection, complete with tour guides and handy wall plaques guaranteed to turn you into a Francophile, too. Bon Voyage!