Has Daimler's Ultralux Brand Gone From Overpriced To High Value? View All Specs
Imagine the audacity: during the salad days of the early 2000s, the company that invented the automobile – already synonymous with class-leading luxury – sought to further expand its portfolio by crashing the ultraluxury party. Going up against the likes of Rolls-Royce and Bentley, Mercedes-Benz traded its unmistakable Three-Pointed Star for a Mighty Mouse-like logo, exhuming a stately, long-dead German marque originally founded in 1909. The long-wheelbase Maybach 62 listed at an epic $360,000, while later spinoffs included curiosities like the nearly $700,000 Zeppelin, and a roofless, seven-figure limousine dubbed Laundaulet.

By the time the financial bubble finally burst in 2008, the brand's fate was all but sealed, with US sales dropping into the double digits. It limped along another four years, but when the nameplate finally went kerplunk, it left behind it a trail of disappointed movers, shakers, moguls and rappers. The perfect postmodern metaphor for the brand's funeral pyre? Kanye West and Jay-Z's Otis music video, in which a perfectly fine Maybach is chopped and deconstructed, flames spewing out the tailpipes as it powerslides through an empty parking lot. 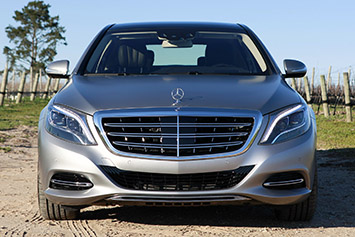 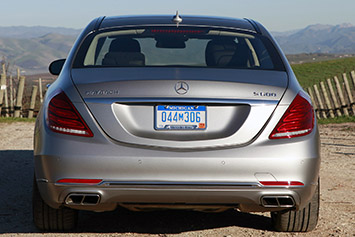 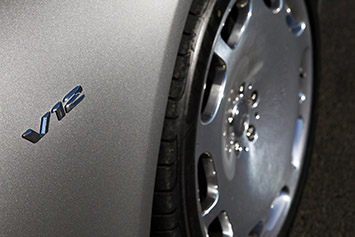 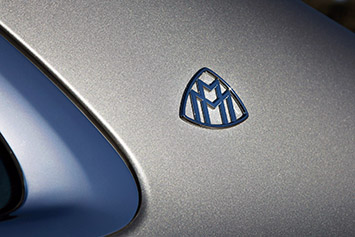 Rising from the ashes of hubris is the 2016 Mercedes-Maybach S600, a recalibrated stab at high-end luxury with a startlingly similar, yet different, approach to its forbear. Like the last go, the new sled features a significantly longer wheelbase, which stretches 8.1 inches over the standard S600. Additional sound damping helps it claim the quietest rear cabin in all of production automobiledom, and posher trim bits include a rim of wood surrounding the reclining rear seats. Among the livery-focused special features is a rearview mirror-mounted microphone to amplify the driver's voice, an available rear fridge, and an executive seat package with folding tray tables. The super high-end hallmarks are there – a twin-turbo V12 dispatching sub-5 second 0 to 60 times, a stunning 24 speaker Burmester sound system, double-M branded silver plate champagne flutes, et al. – but the hyperinflated price tag is not. Starting at $189,350, roughly half the cost of the old flagship, the new Maybach isn't even the most expensive Mercedes-Benz you can buy. That distinction goes to the S65 AMG Coupe, which empties your coffers to the tune of $230,900. Rounding out the revitalized sub-brand is a forthcoming V8-powered Mercedes-Maybach S500, and a Head of State-ready, block-long Mercedes-Pullman 600. 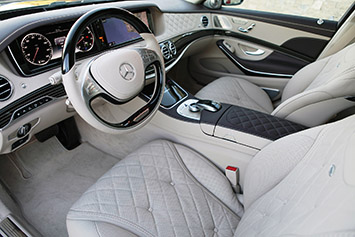 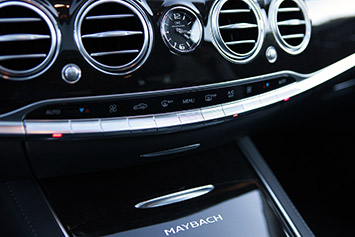 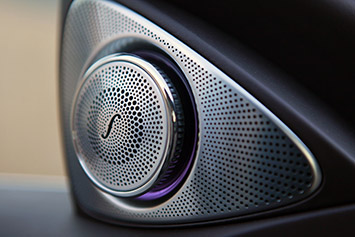 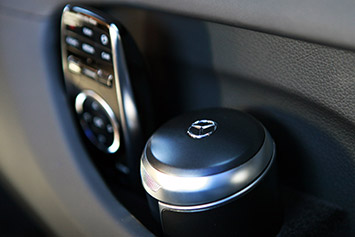 My first impressions of the Mercedes-Maybach S600 come, naturally enough, from the rear seat. The plutocratic role playing, orchestrated by Daimler's press department, involves a white-gloved driver, a ninety-minute cruise through the idyllic Santa Ynez Valley, and a demo disc showing off the rear multimedia screens. The 1,540-watt system is stellar, relaying thumpy lows and crisp highs via 24 speakers and 24 separate amplifier channels. But once the movie demo is done, the drive offers a chance to sample that most elusive quality every noise, vibration and harshness engineer aspires to: silence. The "world's quietest car" claim stems from a number of reworked structural pieces, including underbody and wheel arch lining insulation that reduces high-frequency tire noise. The Mercedes-Maybach's rear doors are actually shorter than a standard S-Class', since the small triangular windows have been moved to the c-pillar and treated with special bonding and sealing for sound deadening. Air ducts around the rear deck and sealed seatbelt inertia reels also keep the thrum out. Though you can still perceive a touch of muted road noise if you listen hard enough, this S600 is dramatically well-insulated and quiet, making conversation, contemplation, or napping remarkably easy tasks.

The rear seats are comfy thrones, with pillowy Alcantara head cushions and a recline function that tilts the backrest to 43.5 degrees. Calf support is available via an extending lower section, though taking advantage of the 12.8 inches of knee room – which is nearly double that of the standard S600's 6.5 inch figure –requires moving the front seat forward via the door-mounted seat controls. As you might expect, it's hard to find fault in the Mercedes-Maybach's rear cabin; the quilted leather surfaces are supple, the wood swaths are discreet but opulent, and virtually every detail is pleasantly executed, from the leather headliner to the alloy tray table, whose flat leather top surface makes it feel fancier than the First Class cabin of a Lufthansa 747-8. 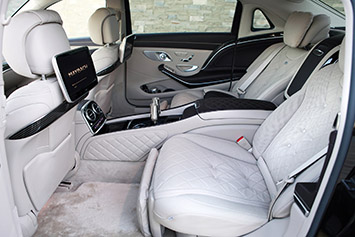 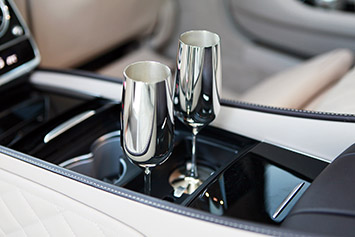 Behind the (Triple-Pointed Star) Wheel

Let's face it: nobody buys a long-wheelbase Panzerwagen for the driving dynamics, but we gave the Mercedes-Maybach a go anyway... you know, for science. Apart from some minor trim differences including Maybach logos on the armrests and center console, the view ahead is pretty much what you'll find in an S-Class, which is mostly a wonderful thing. Nifty details include aluminum tweeters that rotate and rise to attention upon startup, diamond-shaped perforations in the dashboard echoing the Nappa leather seating surfaces, and an analog IWC timepiece front-and-center between the Bentley/Roller-style slotted A/C vents. The Three-Pointed Star on the steering wheel remains, as it does on the hood ornament, the engine and the tail.

The 6.0-liter V12's 523 horsepower, 612 pound-feet output coupled with a seven-speed gearbox makes acceleration effortlessly whooshy, quiet and drama-free. Unlike the old Maybach, there's no rear-mounted speedometer, so Thurston is less likely to urge Jeeves to slow the hell down. But there is a deep, deep well of torque whose peak starts at 1,900 rpm, enabling seemingly endless tachometer spins with almost imperceptible shift points nestled between. Predictably, there's a bit of softness to the steering, and the ratio is slow to encourage smoothness. Body motions over surfaces of varying quality feel minimized, and the Magic Body Control suspension manages to smooth out the ride rather nicely, leaving only slight, slow heaves, sways and pitches that are perceptible to passengers. 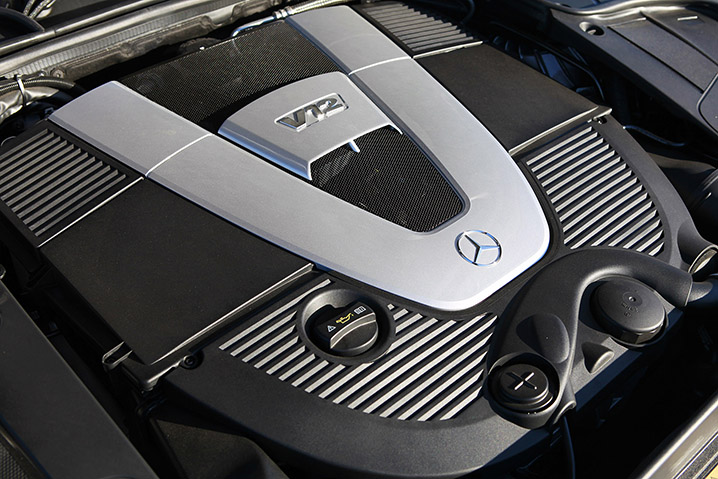 Though there's a ton of functionality embedded into the twin 12.3-inch screens, including a virtual tach and speedo that can scoot aside to display a thermal night camera view, the all-digital dashboard is a bit of a shame, given the classic loveliness of good old fashioned, jewelry-like analog gauges.

While 2003- to 2011-era Maybachs took a heavy-handed approach with their Japanese-like exterior styling and vertical expanses of wood and suede inside, the new edition is pleasant, understated, tony – and quick. The proportions have shrunk. The new car is nearly 11 inches shorter than old Maybach 57 and almost 30 fewer inches than the Maybach 62 – and although it's smaller, the accommodations are still spacious enough for seriously chichi lounging. Another pleasant upside to the passage of time is that the cost of techy options have dropped dramatically; not only do the standard safety and convenience items blow the older Maybach out of the water, things like the electrotransparent (a.k.a. Magic Sky Control) roof which once cost $15,500 now only adds $2,500 to the MSRP. 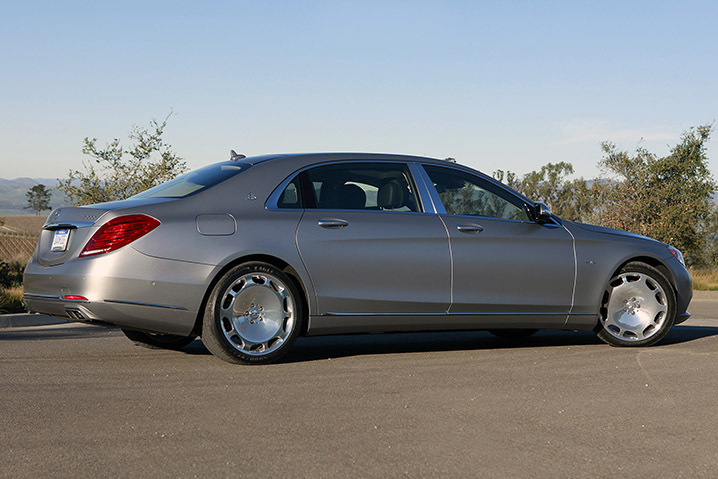 In contrast to its antecedent, the new Mercedes-Maybach S600 slashes the price of entry in half and makes the stretched, ultraposh sedan a relative bargain at $189,350. The lesson most vividly driven home by the 2016 edition of Mercedes-Benz's über sub-brand Maybach, which rides on the coattails of the S-Class which has already sold 100,000 units since its first year? This isn't just the golden age of horsepower, luxury, and technology; it's a new era in which that triumvirate is more accessible than ever.