I've got a serious case of the jim-jams.

I'm standing fewer than 20 feet from a 1969 (and a half) Citroen DS parked in the shade of Point Mugu Rock, just a few miles north of Malibu on the Pacific Coast. The owner of the car, Jeff Suhy (Instagram's Pynhead), is explaining the startup procedure and, instead of actually listening, I'm nervously shuffling from foot-to-foot, secretly hoping the iconic rock will lose from its eternal moorings, roll as rocks do, and crush enough of the car that I can go home early.

It's not that I want the world to lose another weirdo French car, but I'm about to drive my hero, a car I've loved for decades, and I'm petrified that it won't live up to my expectations. And if that happens, I don't know what I'll do with myself, or my eBay search settings.

Jeff hands me the keys and walks confidently over to the passenger side. His nonchalance is only adding to my stress. "How do I start it again? I forgot." Better he thinks I'm an idiot than learns the truth that I was trying to use telekinesis to destroy his baby.

I flop into the world's most comfortable seat and sink into what feels like 20 inches of foam and leather, click the key into the ignition, which is tucked between my legs right under the monospoke steering wheel, and reach for the starter button just to the right. Nothing can stop it now; I'm finally going to drive a Citroen DS. 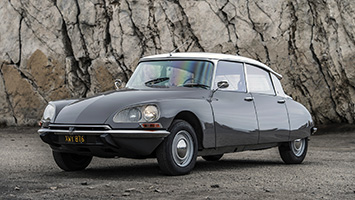 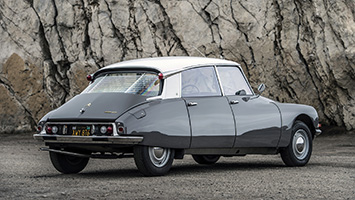 If you're looking for a full history on the DS, the rabbit-hole goes as deep as you want. It's a fascinating car from a truly fascinating company, so I'll be brief. It's October of 1955 and the Paris Motor Show is in full swing. Across the Pond this year, America saw the introduction of the straight-edges of the Tri-Five Chevy and Ford's Thunderbird. But even Europe, a little more daring that year with the Karmann Ghia and Mercedes 190, wasn't ready for what the French were about to drop. It would also help to remember at this time that Citroen was selling the snail-shaped, built-for-rural farmers 2CV and the Traction Avant which debuted in 1934 looking like something from 1929.

The sheets came off. The world's collective jaw dropped. Citroen recorded 80,000 pre-orders — with deposit — before the show closed.

It wasn't just that the DS was a visual stunner, either. The DS was front-drive with the engine mounted far behind the front axle and the transmission mounted in front of the engine. It featured inboard brakes. But the big news was the hydraulic system. Instead of simply assisting the brakes and the steering, the hydraulics on the DS gave life to the self-leveling suspension and the clutch, too. This is why Citroen DS ownership is so terrifying and exciting. 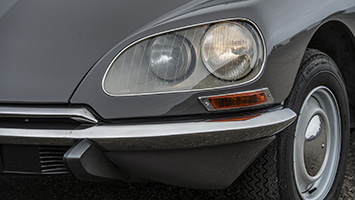 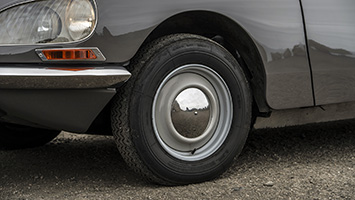 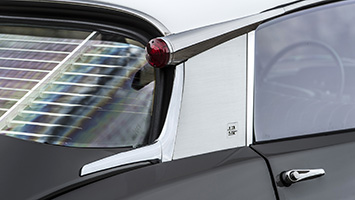 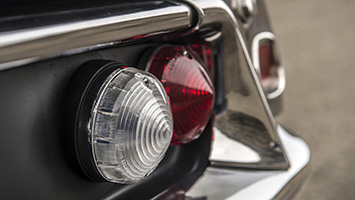 Owing in part to the importance and omnipresence of the hydraulic fluid, you can't just start up a DS and go. Once the car turns over, you wait for the pumps to stop whirring while the car re-levels. Then you wait for them to prime and stop whirring again. It only takes about 30 seconds, but the noises and feels as pumps pump and fluid finds its forced level are bizarre. It's like starting a boat and then waiting for the ocean to calm before you get going.

I've got the clutch buried in the carpet as I triple-confirm the retrofitted, '70-spec column-mounted five-speed manual – this car was born with a four-on-the-tree – is in neutral. None of the gears feels particularly positive, but neutral is even messier. There's probably 4-5 inches of lateral travel in this space. Shifting this quickly, even quickly enough to not get rear-ended in traffic, is going to be tricky. Take a large bucket and put your keys in the bottom. Now fill that bucket with bouncy balls. Now try and fish your keys out with a 1-inch dowel. That's what this transmission feels like. First is towards the driver and up. Up a lot. Maybe 3 inches. The motor's running, the pumps are done pumping and traffic's clear. Time to go. 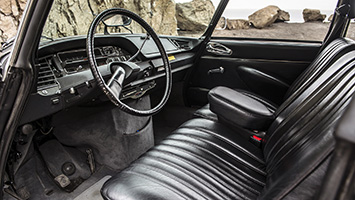 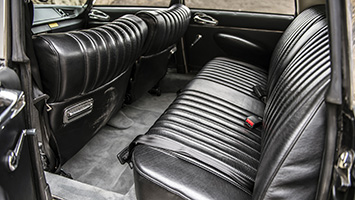 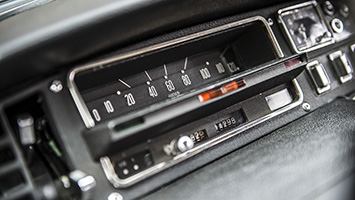 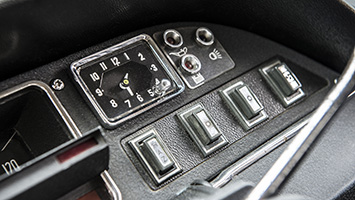 The clutch takeup is immediate; I haven't even touched the gas and we're rolling. So I roll into the gas and, well, it's not that different than idling. There's no tach, but at 10 mph, the 2.1-liter starts to fuss and the powerband's gone slack. From the factory, the DS21 made 109 horsepower. Now? Less. Probably. Not enough for sure. Second feels like a mile down and I'm worried I've snapped something. Jeff is a patient passenger and giggles a little "you got it" encouragement. I do not want to hurt his car. Especially not when my neck is so close to his hands. This shift takes approximately three seconds.

Second is a little sweeter and we've almost merged with pro-level cyclists before the engine does its death-grumble again and I reach for third. Third is the business. Cruising at 45 you can barely hear the crummy lump of French iron that helps explain why you can't name a single French engine family. Passing is a Miata-like affair where conservation of momentum and forward thinking is required. Floored, the engine feels buzzy, gutless, coarse – charming in much the same way that concrete furniture is.

Fourth brings up to highway speeds as I get more comfortable with the car. I get bold and shift up to fifth and smack my knuckles on the dash. This is a stupid place to put a manual transmission. Jeff says that if you don't check the speedo frequently, the car naturally cruises at 80 mph. I buy that. It's easy here in the low 70s and feels like it wants more. Sustained trips at that speed, he says, net fuel economy averages of 26/27 mpg. Not bad. 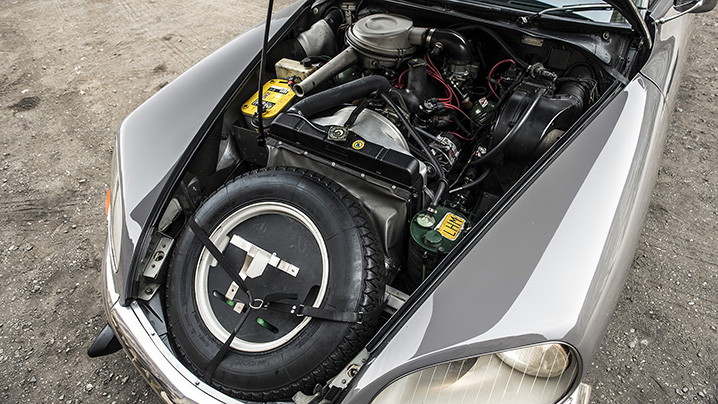 "Did you shoot the brake pedal?" I ask photographer extraordinaire Drew Phillips.

For those not in the know, Citroen went rogue with the brakes on the DS. Not only are the front discs mounted inboard, next to the transmission, but Citroen did away with the brake pedal entirely. Instead, you get a small rubber mushroom that covers a pill-shaped button on the floor. The action, too, is bizarre. There's, max, a quarter-inch of travel and then all of the braking power and finesse you do need is done via pressure. It's not unlike race car or go kart brakes just with 1/20th the travel.

I nearly launch us through the windshield when I first hit push the button. I was warned about the sensitivity and I couldn't remember if it had ABS or not. (It doesn't.) The brakes were more sensitive than I expected. I nearly gave up and walked home during a three-point turn on a hill. 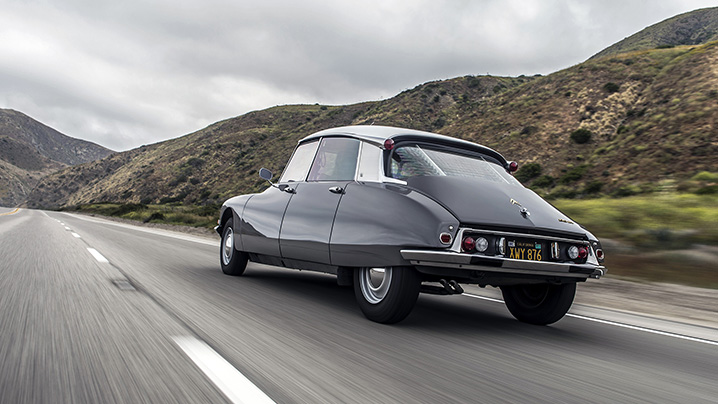 It's hard to describe just how good this car rides. It doesn't float and it's not sloppy at all. There's a bit of roll, sure, but it's a firmer sensation than expected. I was expecting something like a driving waterbed when in reality it rides quite a bit like a modern S-Class, just with more sidewall and more bump compliance. Even over rough pavement and dirt, the suspension kept everything out of the cabin.

"Whoa boy is my Subaru fast and uncomfortable!" I sent Jeff this text from a fuel stop about 20 minutes after driving his car and my brand-new, big-tired, softly-sprung, turbocharged crossover feels like a rocketship on wagon-wheels. I miss the cushy seat and vast interior space. I miss the goofy transmission and giant steering wheel. I miss the overwhelming Frenchness of it all.

I've been burned by classics in the past. We all have. It's why they warn you not to drive your heros. A Ferrari posted on your wall is a lot less of a headache than a real one in your garage. But the DS wasn't a burn. It was slow and fascinating and enchanting. Driving it only made me want one more.

If anyone needs me, I'll be on eBay.