Mercedes-AMG Petronas driver Nico Rosberg Rosberg doesn't attribute anything mystical to the form that got him ahead of teammate Lewis Hamilton. He said simply, "Before it was close in the other direction, now it's close in this direction."

Mercedes non-executive chairman Niki Lauda went further, saying Rosberg's "brain has switched." Under the desert spotlights it switched so far ahead that Lewis Hamilton qualified nearly four tenths behind the German. Kimi Räikkönen flew the scarlet for Ferrari in third position. Being three spots ahead of Valtteri Bottas gave Räikkönen a huge advantage in locking up fourth position in the driver's championship. Even if he doesn't care about it, as he's publicly stated, Ferrari probably does. Teammate Sebastian Vettel was classified 16th after the German slowed down after making a mistake on his final hot lap, and neither he nor his engineer realized how quickly times were falling on a cooling track. He'd be promoted to 15th when Lotus driver Romain Grosjean was penalized for a gearbox change.

Sergio Perez knocked it out of the park for Sahara Force India, claiming fourth ahead of Daniel Ricciardo in fifth for Infiniti Red Bull Racing. Williams driver Bottas was in sixth, in front of the second Force India of Nico Hülkenberg and the second Williams of Felipe Massa in eighth. Daniil Kvyat ensured both Red Bulls were in the top 10 with his ninth position, and Carlos Sainz got the upper hand in qualifying over his Toro Rosso teammate Max Verstappen for the final time this year, rounding out the top 10. 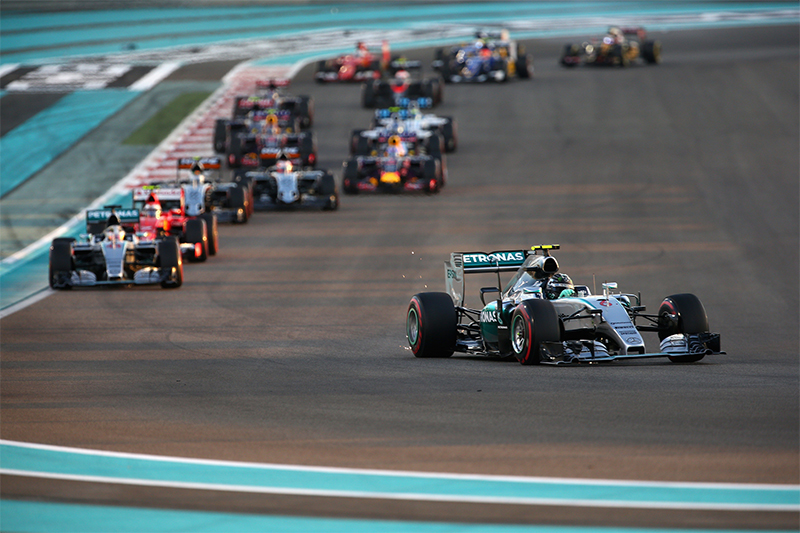 Beyond Nico Rosberg's mind, one of his weaknesses was his slow starts. Those are stronger, too, the German tearing off away from the field when the lights went out. Hamilton bogged enough to have to defend from Perez behind, the Mexican trying to slide between Hamilton and Räikkönen on the run to the first corner. Rosberg held the lead into Turn 1 and likewise held it through Turn 21 on the last lap of the race, only ceding it during pit stops. Rosberg's 14th victory gets him level with Graham Hill on the wins list – on the anniversary of Hill's death in a plane crash – and marks the first time in his 10-year F1 career that he's won three races in a row. More proof of his strength: the last few races we haven't heard Rosberg ask for regular updates about what Hamilton's doing, he just drives.

Hamilton gave it his best but that wasn't enough. He asked to change tire strategy late in the race when it was clear he couldn't catch Rosberg conventionally, and we were puzzled by the team's strategy. His side of the garage kept him out 10 laps longer than Roberg, and Hamilton – leading at this point – wanted to stay out until the end of the race. His engineer said it couldn't be done, they couldn't bank on the tires being safe through 44 laps. But instead of putting on the super soft tires with 14 laps to go, they put on the slower soft tires, afraid the super softs would go off quickly and leave Hamilton vulnerable to Räikkönen. To win, then, Hamilton had to outpace his teammate by one second per lap for 14 laps, and actually pass him. That wasn't going to happen, so he settled for second. 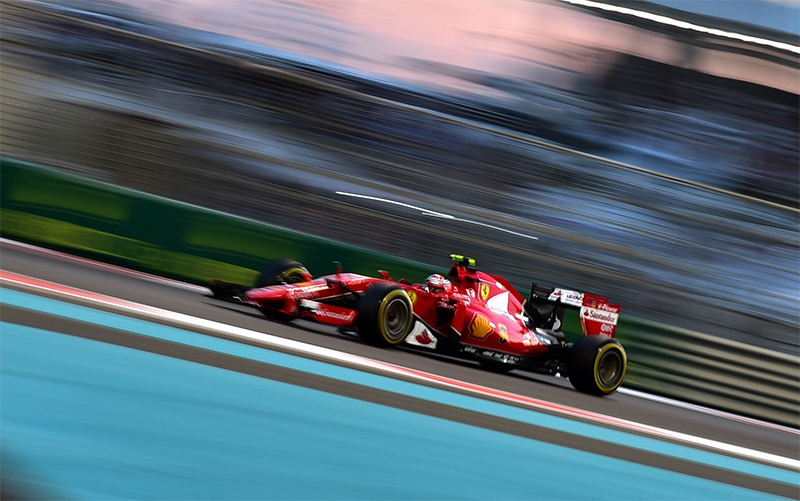 Räikkönen got on the podium for the third time this year, after keeping the Mercedes' honest during the race. Even after a 6.6-second pit stop and slowing down in the final laps, he finished 'only' 20 seconds behind Rosberg, 11 seconds behind Hamilton. The only passes for position that he made were when teammate Vettel let him through, Vettel being on a different strategy in order to get the best run through the field after starting 15th.

The German still remembers how to carve through the field, up to 12th place at the end of the first lap, in seventh on Lap 8, running third on Lap 15 before allowing his teammate through. His first long stint got him into fourth on Lap 16, and he'd clinch the position by passing Perez on Lap 45. 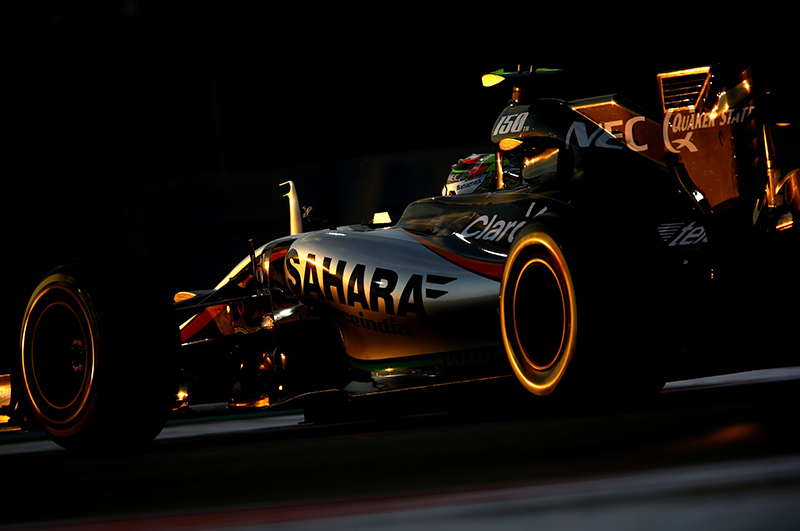 Perez followed him to the flag in fifth, giving Force India the title of Best of the Rest in the desert. He was shadowed by Ricciardo in sixth, coming in just over a second behind. Hülkenberg made it another nice points haul for Force India by finishing seventh. It used to be that the Indian team fell off at the end of the season, this year the B-spec car they brought to Belgium turned the wick way up: they scored 97 of their 136 points after the summer break, and outscored Red Bull in that same period 97 to 91.

Massa and Grosjean crossed the line almost nose-to-tail in eighth and ninth; Grosjean had pitted on Lap 44 to make a charge to the end of the race, and probably would have cleared the Williams driver if he'd had one more lap. Kvyat rounded out the top ten in the second Red Bull.

That, then, is the season. Mercedes finished one-two 15 times this season out of 19 races, a record for the sport. It also took the largest share of the available points; McLaren took 82.5 percent of all the points on offer in 1988, Mercedes vacuumed up 86 percent of this year's points. The Anglo-German's team's 703 points in the constructor's championship is the most ever won in a season. 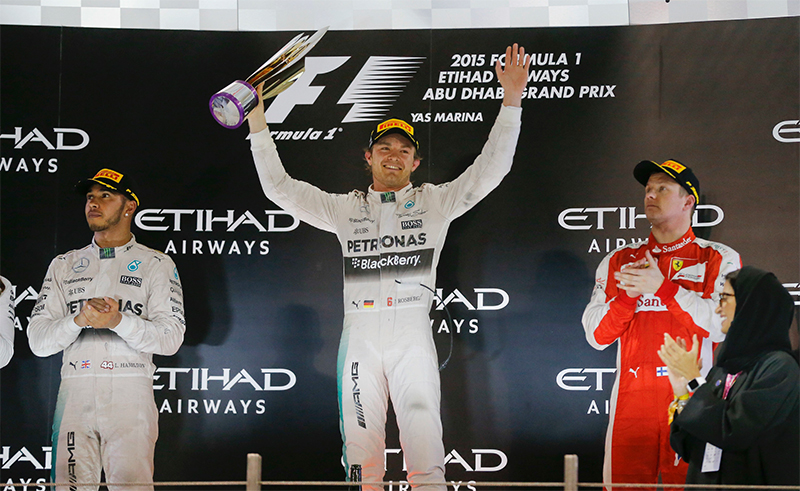 Now we look forward to an off-season that has true potential to shake things up. If Rosberg really is mentally stronger, and Hamilton's late-season form isn't a matter of changes to the car, as Hamilton has said, then we might see some real fighting at the front even if it is between two silver cars.

Vettel got on the podium 13 times this year and won three races. If Ferrari can make the same kind of progress over the winter, we might see more red mixed with silver at the pointy end. Red Bull is going to have more development leeway with its engines next year, we'll see if it's as good with power units as it is with aerodynamics. In spite of Alonso's passive-aggressive radio calls, the Honda power unit had its best outing in Abu Dhabi with Jenson Button finishing 12th and actually passing a Ferrari-powered car on track. We'll learn what Lotus reserve driver Jolyon Palmer can do with a race drive, what a Renault manufacturer team if it indeed completes its takeover of Lotus, whether the totally revamped Manor Marussia can move up the grid, and whether the totally new Haas F1 can make a mark its first year.

There will be only two pre-season tests in 2016, the first four-day session at the Circuit de Catalunya February 22-25, just 85 days away. The second test is March 1-4 at the same venue, and the first event of the 21-race season goes down in Australia on March 20. The tilt for the title in 2016 has officially begun now, we'll see you next year.