Return To The Era Of Feeling

Something has happened to sports cars over the past 15-20 years. While reaching ever-higher levels of quantitative dominance the driving experience continues to become more sterile. Stability control, torque vectoring, variable electronic steering racks, lightning-quick dual-clutch automatic transmissions – all these make it easier to harness more power and drive faster than ever before.

And yet too often it feels like something is missing. There is a growing divide between the capabilities of the modern performance car and the driver's sense of connection to the experience. In an era like the one we're in now, the Jaguar Lightweight E-Type hits you like a slap in the face.

The story of the Lightweight E-Type goes back to 1963, when Jaguar set aside eighteen chassis numbers for a run of "Special GT E-Type" cars. These were factory-built racers with aluminum bodies, powered by the aluminum-block, 3.8-liter inline-six found in Jaguar's C- and D-Type LeMans racecars of the 1950s. Of the eighteen cars slated for production, only twelve were built and delivered to customers in 1964. For the next fifty years, those last six chassis numbers lay dormant, until their rediscovery a couple of years ago in a book in Jaguar's archives. 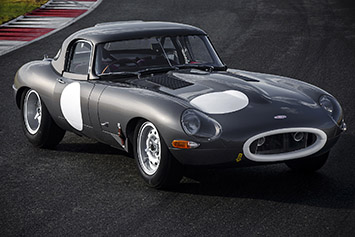 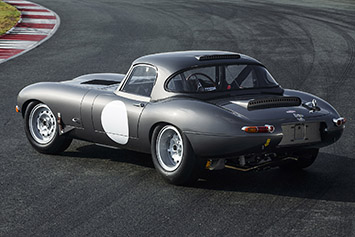 In an era like the one we're in now, the Jaguar Lightweight E-Type hits you like a slap in the face.

Jaguar Heritage, a section of Jaguar Land Rover's new Special Vehicle Operations (SVO) division, took on the task of researching the original Lightweight E-Types and developing the methods to create new ones. Every aspect of the continuation Lightweight E-Type, from the development of the tools and molds used to build the cars, to the hand-craftsmanship, reflects doing things the hard way. They may not build them like they used to, but with these six special E-Types, Jaguar comes awfuly close, if not better.

Working alongside the design team, Jaguar Heritage made a CAD scan of one side of an original Lightweight E-Type body. That scan was flipped to create a full car's worth of measurements. That ensured greater symmetry and better fit than on the original Lightweight E-Types (which could see five to ten millimeter variance, left-to-right). The scan was also used to perfect the frame, while Jaguar looked through notes in its crash repair books to reverse-engineer the Lightweight E-Type's suspension. The team repurposed a lot of existing tooling for the continuation cars, and developed the rest from analysis of the CAD scan. 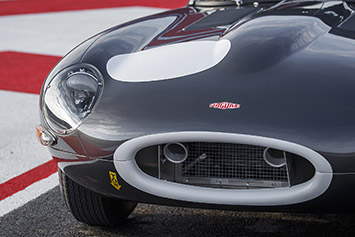 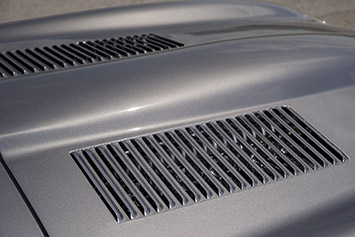 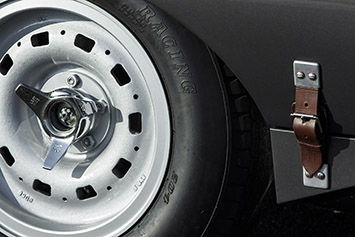 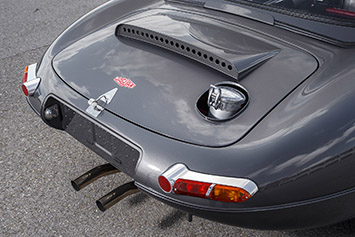 The build process is intense: 120 hours to make one scuttle panel, for instance.

The build process is intense: 120 hours to make one scuttle panel, for instance. Stress areas predicted by CAD scan modeling mirrored those complained about by owners of E-Types, and were thus reinforced. The aluminum used for the surface panels and structure is nearly identical to that found in the original vehicles. About 75 percent of the panels are made in-house at the JLR facility in Whitley, England, with some larger panels coming from outside specialists using Jaguar-designed tooling. The rest of the build takes place between JLR's Coventry facility (for paint), and the Jaguar Heritage facility at Brown's Lane. Unlike the production of the 1960s Lightweight E-Types, the sheet aluminum for the continuation version has tabs that secure each panel onto its corresponding jig. Then, the tabs are cut off and sanded so you never knew they were there. In a nice touch, Jaguar sends the scrap aluminum to the Bremont Watch Company, which uses it to make a custom watch to go along with the car.

About 500 people make up the he JLR Special Vehicle Operations division, including those working for Jaguar Heritage. In addition to the continuation E-Type Lightweight project, it also handles the restoration and service of classic Jaguars. You can get a Heritage Center health check on any old Jaguar, making it possibly the coolest place on the planet to get a pre-purchase inspection. 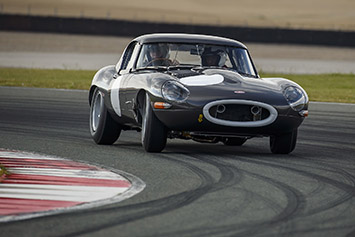 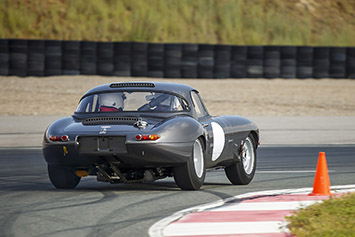 Everything in the Lightweight E-Type is alive with mechanical function.

So after the years of planning (including over 50,000 man hours spent getting the body right alone), how is the continuation Lightweight E-Type to drive? We'll spare you the hyperbole typical of automotive reviews: it was literally life changing. For all but the six lucky owners, driving this car is a once-in-a-lifetime experience. You can drive an old racecar, but this is a new old racecar, refined and built to the highest standard by the very company that first built it in 1963. It's a time machine that takes you back to an era where the quest for ultimate performance and driving feel were one in the same. The only concessions to modernity in this car are the updated roll cage and fuel lines, done to bring the Lightweight E-Type in line with FIA homologation regulations for historic racing purposes.

Everything in the Lightweight E-Type is alive with mechanical function. The thin, wooden steering wheel feels like it could break under intense use, but doesn't. You can sense the throttles opening when you press the accelerator. Stepping on the brakes feels like you're putting your foot down directly on the pads. Stopping means you have to plan ahead compared to modern ABS setups, and slowing from triple-digit speeds requires extra movement from the hips to get the job done. Similarly, it takes some shoulder grease to move the shifter, but you can feel the mechanics in the transmission below as you manipulate the heavy steel gears. 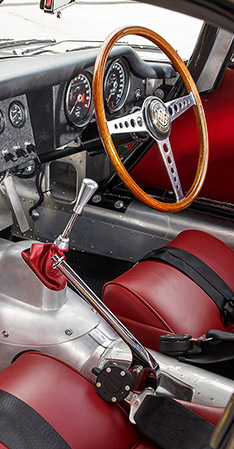 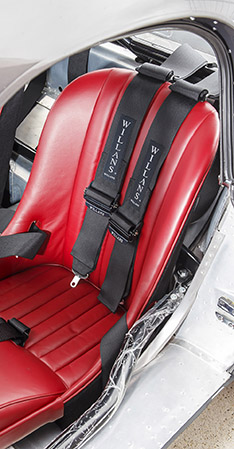 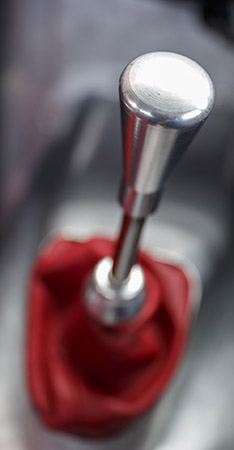 Driving the Lightweight E-Type is a reminder that, once upon a time, it took work to get the most out of a sports car.

Because the Lightweight is so communicative, it's easier to place on a track than many modern cars. You get to know the car and your limits within it quickly. The smell of gas in the cabin mixed with the Connolly leather (produced to the same specs as the 1960s cars, of course), add to the euphoric sensation.

Power comes from an aluminum-block, 3.8-liter inline-six producing 340 horsepower at 6,500 rpm and 280 pound-feet of torque at 4,500 rpm. As with the '60s Lightweight E-Types, you can have yours either with a period-correct Lucas fuel injection system (mechanically driven from the camshaft), or a triple Weber 45 DCOE carburetor setup. The major difference between the two that the carburetor-equipped version is more tractable across the rpm range, where the fuel injected version needs to be in the higher revs to get the most out of it. Basically, you have to drive the injected car like a racecar or it's less than smooth. Not the worst fate.

Driving the Lightweight E-Type is a reminder that, once upon a time, it took work to get the most out of a sports car. Staring is a three-step process: turn the key, switch the fuel pump on, and push the ignition button. The car has to "take a set" in corners, thanks to the high-profile rubber that flexes before reaching its hold point. You rev and blip the throttle on pit lane because you legitimately have to pile on the revs if you're going to get moving without looking like you're trying to stay on a bucking bull. Double clutch shifting is pivotal to getting the car right, and when you get it right, it is so right. This is what driving is supposed to feel like. 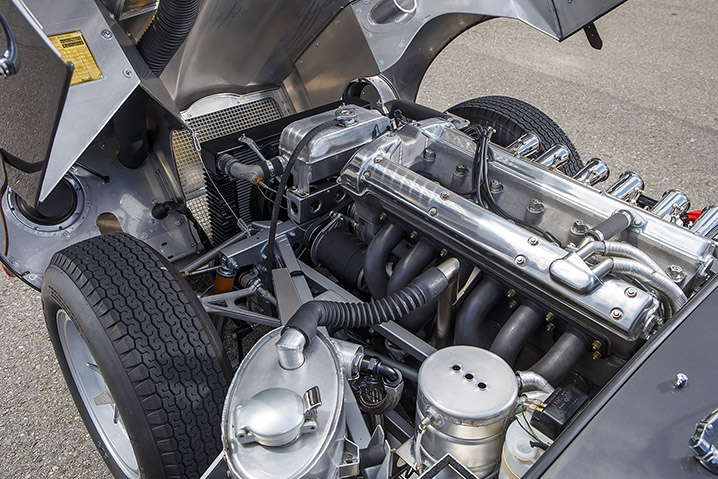 Double clutch shifting is pivotal to getting the car right, and when you get it right, it is so right.

Cars have evolved dramatically since the last original Lightweight E-Type was delivered in 1964. Used to be, if you were building the highest performance car possible you were also building one that offered the highest level of feedback possible through the wheel, the pedals, and the driver's seat. Because the human being was the ECU, the more information you could give him (or her, of course) the faster the car could go. Road feel was a necessity. But the march of technology created an unintentional fork in the road. Cars don't have to be communicative to offer tremendous performance anymore. As far as carmakers are concerned, the goal was always ultimate performance. Ultimate feedback was often a side benefit of that quest.

To be clear, we're not here to make a Luddite argument: improved emissions, fuel economy, safety, and infotainment technology are all very good things. But, speaking strictly about performance-minded cars, there was a shift (we'll make the case for the late 1990s) where the automotive world decided it was okay to give up a big part of what once made cars great. This is where we share some of the blame for the death of feedback. We simply don't demand it. We want Nordschleife times; 0-60 times once reserved for superbikes; ever-bigger horsepower numbers. Carmakers are just building what we (journalists and car buyers alike) want. So wait, we are here to make a Luddite argument. Few cars are made to bring smiles to faces as a top priority (yes, Mazda, we see you), despite what any marketing campaign might tell you. 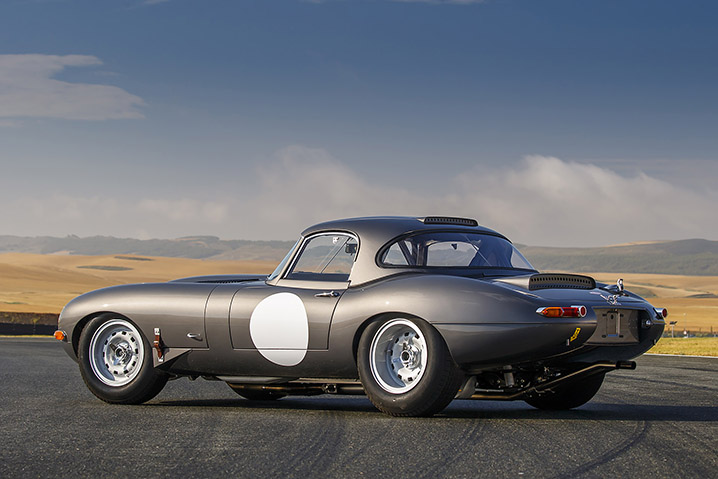 The Lightweight E-Type costs around $1.5 million and was sold out five times over.

In the past, driving enjoyment came from the feel of a car, rather than just its speed and capabilities. Today it's sold to us in convenience items: cooled seats, high-wattage stereo systems, WiFi. For good or bad, spending some time in the continuation Lightweight E-Type illustrates just how far the auto industry has come, and how much we as car enthusiasts have both gained and lost in the process.

Demand for feel obviously still exists: The Lightweight E-Type costs around $1.5 million and was sold out five times over. That is, 30 people waving money at Jaguar, but only six took delivery. The insane prices for vintage sports car and the cult followings developing for anything built before electronic steering and onboard computers show that feel still matters. Most among that group will have to find ways to make their own fun, as the era of feedback is long gone, while the lucky six get to take their brand-new factory-built Jaguar Lightweight E-Type out on the track. For just a little while, they'll get to know the joy of the absolute connection that used to be the pinnacle of the motoring experience.