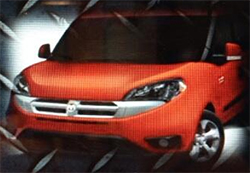 Ram Trucks CEO and President Reid Bigland got his turn among the executives elucidating the near-term futures for brands in the Fiat Chrysler Automobiles umbrella, laying out the plans for both Ram trucks and Fiat Professional. After Bigland said that the company "will continue to invest heavily in commercial vehicles" for the Italian arm, he didn't give many specifics as to where that investment would go. What we do know for now is that a new Fiat Doblo will come next year - that's the truck we've been catching spy shots of and that will be the basis for the Ram ProMaster City.

In 2016 will come the next-generation Fiorino, a small cargo van sold in markets outside the US as a Fiat, as the Citroën Nemo and Peugeot Bipper. The European and South American markets will also get a new midsize pickup that same year.

Bigland's goal for Ram Trucks and Ram commercial is just a touch more ambitious: "Build the best pickup trucks and commercial vehicles in the industry" and increase NAFTA-market sales from 463,000 in 2013 to 620,000 in 2018. The waypoints along that road include a refresh for the Ram 1500 in 2015 and then a brand new 1500 to come two years later in 2017. Bracketing that, a refresh for the Heavy Duty lineup happens in 2016, and two years later it will also get an all-new generation.

In the same timeframe the commercial models will get called in for a mix of updates. The ProMaster gets fitted for a diesel – a different oil-burning powerplant than the 3.0-liter in the Ram 1500 EcoDiesel – later this year. The ProMaster City also bows in Q4 of this year, and you can see a rendering of its face that we caught during the presentation. The Ram Chassis Cab is due for a minor update in 2016, major updates headed for both the Ram Commercial Light Duty line in 2017 and the Heavy Duty and Chassis Cab line in 2018.