As Sergio Marchionne flies back and forth between Turin and Auburn Hills, he doesn't just bring Chryslers back with him to Italy to sell as Lancias. He also brings Fiat products to sell Stateside under various Chrysler labels, chief among them Ram.

The former Dodge truck brand launched the Fiat Ducato as the Ram ProMaster earlier this year, giving it 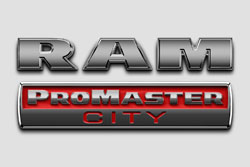 a greater foothold in the commercial vehicle market and a replacement for the Sprinter which Mercedes-Benz took back from its Chrysler-partnership days. Now Auburn Hills has announced that Ram will begin selling the Fiat Doblo on this side of the Atlantic as the Ram ProMaster City.

The Doblo, which was twice named International Van of the Year, has sold over 1.3 million units worldwide. Whether that includes the rebadged version which Vauxhall and Opel sell as the Combo is another matter, as is the question over how much longer Fiat and General Motors will continue that particular partnership as the ties between Fiat and Chrysler deepen.

Joining the larger and highly capable Ram ProMaster as an additional van offering, the 2015 Ram ProMaster City will compete with small commercial and passenger vans.

"The Ram ProMaster City further expands the Ram Commercial truck lineup, which includes everything from vans to pickups to Class Four and Five trucks," said Reid Bigland, President and CEO - Ram Truck Brand, Chrysler Group LLC. "As Ram Commercial continues to gain share and grow sales in the market, we will be aggressive in our goal of expanding our commercial vehicle offerings."

"Our successful relationship with Fiat Professional, one of the world's foremost commercial truck manufacturers, gives Ram a competitive advantage with access to proven products and technology that will resonate with our U.S. and Canadian customers," added Bigland.

Based on the successful Fiat Doblo, a two-time International Van of the Year winner with more than 1.3 million units sold, the Ram ProMaster City will encompass familiar Ram Truck styling cues and offer features and powertrains preferred by North American commercial customers.