If the Bahrain Grand Prix was a bounty for the fans, the Chinese Formula One Grand Prix returned to the script entitled "Displays of Dominance" yet still offered a fair bit of action throughout the weekend. After not being completely comfortable in the car during the three practice sessions, Lewis Hamilton put his Mercedes AMG Petronas on pole – again, passing Alain Prost and Jim Clark on the all-time list – in a wet qualifying session that no one expected to be a good study for a dry race.

So far every weekend, Daniel Ricciardo has proved Infiniti Red Bull Racing made the right choice in calling him up from the junior squad, the Aussie taking the second spot on the front row in his Red Bull, ahead of teammate Sebastian Vettel. Nico Rosberg, suffering with brake and telemetry problems in qualifying, took fourth. Fernando Alonso predicted the best showing yet for Ferrari, a team in turmoil, and grabbed a fifth grid position he knows well, followed by the Williams duo of Felipe Massa and Valtteri Bottas, Nico Hülkenberg in the Force India, and Romain Grosjean getting Lotus into the last spot in Q3. Heartening for Lotus is that Grosjean said he thought he could have got into the top five if not for the rain.

When the lights went out, you could almost hear plenty of other drivers thinking, "I could get onto the top spot on the podium if not for the Mercedes'." 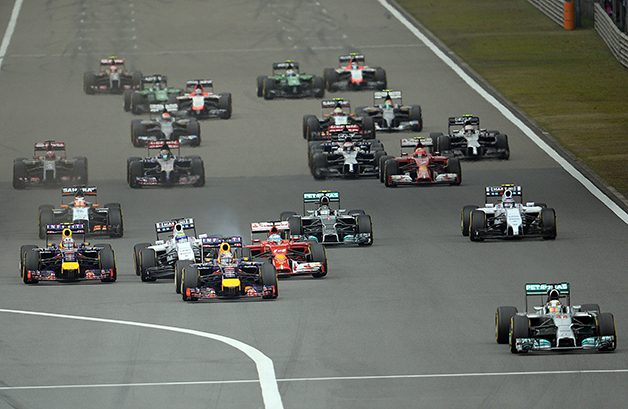 Once Hamilton hit Turn 1 in first place, the Mercedes engine and chassis are so strong that, barring a collision or a breakdown – mechanical or mental – the race would be his to lose. It was a bit of a mess behind him, though, with Vettel jumping into second place, Alonso taking third after some bump-and-grind with Massa, Ricciardo losing his way down to fourth, and Rosberg – whose telemetry failed completely while on the grid – falling back to seventh behind Massa and Hülkenberg.

Immediately, Hamilton began distancing Vettel by more than a second a lap. The only real action he saw is when he went wide at Turn 6 on Lap 17, having run his soft tires far longer than expected and graining the left front. Pitting on the next lap, it seemed like the only thing he had to do was figure out how big he wanted to keep the gap to second place, deciding on 14 seconds by the time the checkered flag waved at the end of 55 laps.

Rosberg followed him home. The German began working his way through the field on the first lap, but spent the majority of the race running down the drivers in front and working a bit harder in his car to get the job done. Yet that he did, passing a few of them with pit strategy and others, like Vettel and Alonso, on the track, claiming second place on Lap 42 and then pulling away.

Alonso gave Ferrari the gift it desperately needed, earning third place and getting on the podium for the first time this season. Hard driving and an excellent first pit stop got the Spaniard into second place on Lap 13, and despite everyone figuring the two Red Bulls had the performance advantage on the straights, Alonso kept Ricciardo and Vettel at bay with one pitch-perfect lap after another, neither one of them able to get close enough to even attempt the pass. One wonders if Stefano Domenicali would still have a job if he could have made it through this weekend. 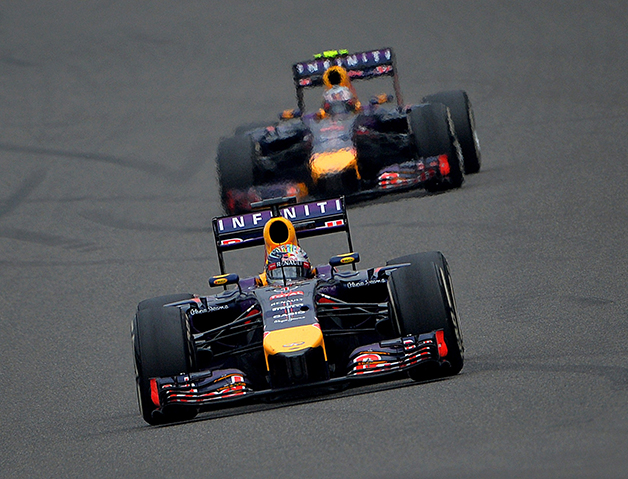 Vettel, of late, could be wondering if his job is to move over for Ricciardo. The reigning World Champion was again asked to move over for his faster Aussie teammate, and after finding out that he and Ricciardo were on the same tire he initially told the team "tough luck." The team then told him that the two were on different pit strategies and he 'let' Ricciardo by on the next lap, but – conspiracy theorists, unite – both drivers would end up on the same two-stop strategy. Ricciardo, once by, kept the pressure from Alonso even from a distance, but the Ferrari driver never gave him a chance to be an opportunist. Ricciardo finished fourth, ahead of his teammate.

Mr. Top Ten Midfielder Hülkenberg had a quiet race to sixth place, followed by a stalking Bottas in the Williams. The team from Grove, England will probably spend the next three weeks before the Spanish Grand Prix working on pit stops and polish, after giving away almost-certain points when Massa endured a terrible pit stop and fell to last place on track, coming home in 15th. 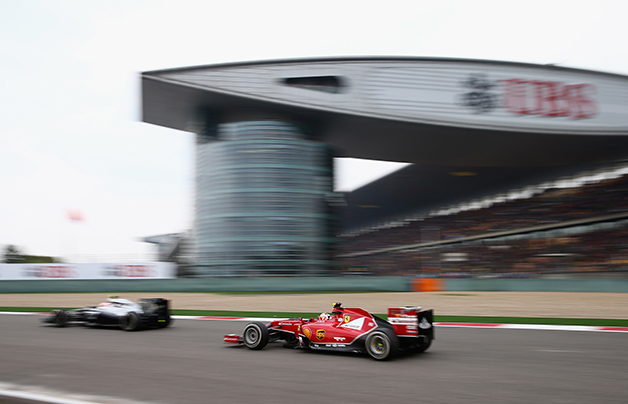 After explaining the troubles he's having with the Ferrari T14, Kimi Räikkönen won't be too upset at a quiet race in which he managed to turn an 11th-place grid position into an eighth-place finish. The Finn's driving style doesn't suit the car, his inability to get the front tires up to temperature and keep them there leading to a host of follow-on problems. The same issue is apparently plaguing Jenson Button at McLaren, the two cars from Woking finishing 11th and 13th. Button has been saying that McLaren is better than it looks, but could only characterize his pace in China as "painful."

Sergio Perez earned more points for Force India in ninth place, and Daniil Kyvat does a lot more talking with his Toro Rosso than with his Russian-accented English, scoring another point for tenth place. He's tied with his teammate Jean-Eric Vergne on four points in the Driver's Championship standings, but Kyvat has scored in three of four races this year, Vergne hasn't scored since the first race in Australia. 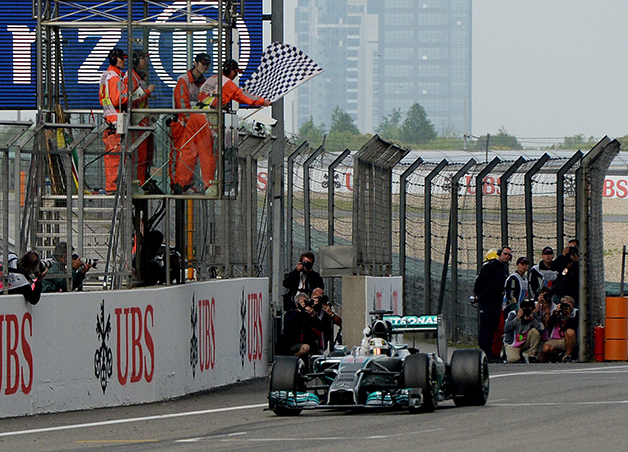 Hamilton's win gives him three in a row for the first time in his career, and it hasn't been since Ferrari did it in the summer of 2004 that a constructor has won three consecutive races. The race results won't be marred by an asterisk, but it will probably live in F1 trivia for yet another reason: the officials waved the flag a lap early, ending the race on Lap 55 instead of Lap 56. FIA rules dictate the results are then taken from the end of the previous laps, so the finishing order is a snapshot of the race at the end of Lap 54. Shaving that single round off the end robbed Kamui Kobayashi in the Caterham of a position after he passed Jules Bianchi in the Marussia on Lap 55.

Hamilton is now just four points behind Rosberg, 75 points to 79, Alonso trailing in third with 41. Mercedes is taking a broom to the Constructor's standings, already at 154 points, ahead of Red Bull with 57 and Force India with 54. This time last year, 2013 Constructor's Champion Red Bull were only 16 points ahead of second place – Lotus, believe it or not – not 97. 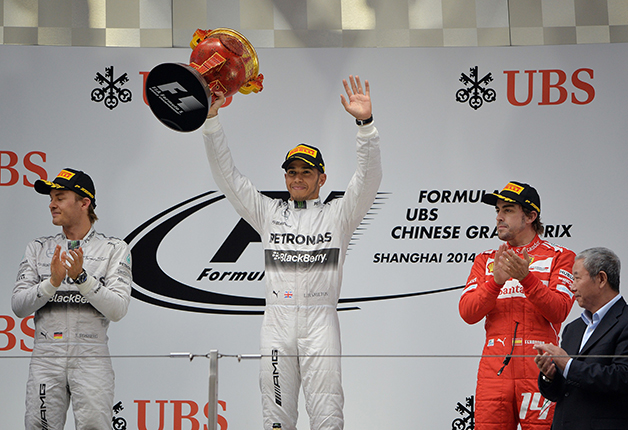 Every team will be anxious for the return to Europe with the Spanish Grand Prix in three weeks. Mercedes made the most of the flyaway races, Red Bull has come from six feet under in the pre-season to being arguably the best of the rest, the fruits of the Ferrari shake-up will begin falling from the tree, we'll find out if Lotus can start getting both cars to the finish and whether McLaren's got a cure for its sluggish start and lack of a title sponsor. We'll see you then.