The Volkswagen Group has already revealed or put on sale a broad slate of new electric vehicles: the E-up, the E-Golf (shown above), the Porsche 918 Spyder, the Panamera S E-Hybrid and the XL1. In 2014, there will be at least six more models, including the A3 Sportback E-Tron. And after that? Well, to hear Rudolf Krebs, Group Commissioner For Electric Vehicle Drive Systems, tell it, VW's future is full of plug-in goodness. "With our platform strategy, it is quite easy to bring a lot of electrified vehicles to the market for the different brands in a very short time," he said.


"We try, with a minimum of those components, to produce a maximum number of variants of cars"

That strategy starts with three platforms: MQB for small cars, MLB for midsize models and MSB for sporty and premium products (there's also the NSF for cars like the E-up). Speaking to AutoblogGreen, Krebs said VW has designed modules, things like engines and electric components (think: AC compressor, on-board chargers and battery management systems), to be used across all three platforms and across all brands all. "We try, with a minimum of those components, to produce a maximum number of variants of cars," he said. "This is only possible if, at an early stage of the design of new vehicles, we implement the idea that these cars are not only designed for gasoline and diesel powertrains but that we can also include CNG concepts, flex-fuel concepts, pure electric vehicles or plug-in hybrid vehicles. With minor changes in the body in white, we can produce those vehicles, bumper-to-bumper, in one factory." 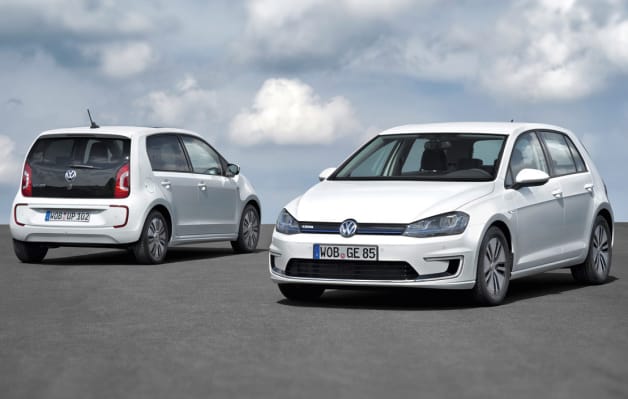 "VW wants to be the leader in the electrification of vehicles"

In this way, customers can choose the powertrain that they want, or whatever powertrain their local regulations demand. Politicians have already put a lot of pressure on the automotive industry, with ever-stricter CO2 regulations coming into effect in all of the major markets. In the US, the fuel economy regulation numbers require the equivalent of 101 grams of CO2 emissions per kilometer by 2025. Europe, it's 95 grams by 2020. And China, which is asking for 118 grams by 2020, will be a tough scenario, Krebs said. Today, by optimizing conventional technologies and supporting things like CNG and biofuels, more than 300 VW Group models emit less than 120 g/km. A hundred of those are even under 100 g/km. But this is not sufficient, and VW admits that conventional powertrains will not be not enough. The writing is on the wall: plug-in vehicles, including pure EVs and plug-in hybrids, will be required. VW has obviously invested a lot in diesel technology and the Group is not ignoring hydrogen by any means, but when the company looks forward, Krebs says he sees batteries and plugs leading the way.

"We decided on the most comprehensive strategy," Krebs said, "because we want to be the leader in the electrification of vehicles." To do this, the board of management decided years ago to comprehensively rethink its approach to EVs. The Group spent a lot of money developing EV knowledge in-house. When it comes to batteries, for example, VW buys cells from a supplier, but assembles the battery packs in-house. VW hired 400 "top experts" to build up its knowledge on electric drive, something Krebs said was a "very strategic investment in the future of our brands." The Group has also trained about 70,000 current employees in EV technology.

It it important to remember, Krebs said, that "Electromobility is comparatively young. Nobody knows where the market will go." Everyone is trying to read the tea leaves, but "the answer will not be simple. There is no blockbuster solution."