Chris Shunk
The Jeep Grand Cherokee has proven to be a rock-solid off-road-capable SUV with a dose of civility on public roads. But while the top Jeep has a terrific reputation and a long list of accolades, at least one model apparently didn't have the chops for the Teknikens Moose (or Elk) test over in Sweden.

The moose test is a lighting-fast emergency lane change maneuver that takes place at a relatively staid 40 miles per hour. While most vehicles clear the obstacle with little fuss, the below video shows that a Grand Cherokee Overland got up on two wheels and very nearly rolled. Teknikens Värld tester Linus Pröjtz points out in the Overland model comes standard in Sweden with 20-inch wheels, rollover protection and electronic stability control.

The Swedish car magazine (translation: "World of Technology") goes on to call on Chrysler to put a stop sale on the Grand Cherokee in Sweden until this issue is addressed, and they claim Chrysler has yet to provide an explanation as to why the vehicle performed so poorly.

Here in the States, the National Highway Traffic Safety Administration awarded the Grand Cherokee four stars, including a five-star score for side impacts. However, in rating the SUV's rollover resistance, the GC only managed three stars in rear-wheel drive configuration, while four-wheel drive models netted four stars.

Scroll down to take in the press release from Teknikens, followed by the one-minute video that shows the GC Overland going all Dukes of Hazzard.

*UPDATE: Chrysler brand fan site Allpar has published an article that alleges that the rollover test was rigged, arguing the test was conducted in an intentionally overloaded vehicle. Further, it reports that the magazine conducted the test again – with Chrysler engineers standing by – in three different correctly loaded Grand Cherokees over eleven separate runs, but they were "unable to reproduce" the wheel lift condition.

**UPDATE: Chrysler confirms it is actively investigating the test and has just furnished Autoblog with an official response which you can read by scrolling down.

Chrysler Group engineers are investigating a Swedish magazine's evaluation of the 2012 Grand
Cherokee. During the evaluation, the publication was able to capture images of a Grand Cherokee on two wheels as it performed an extreme maneuver in an overloaded condition.

The uncharacteristic result was obtained using a vehicle loaded beyond its weight specifications. The Grand Cherokee's weight limitations are clearly stated on the vehicle and in the owner's manual. Also, the extreme maneuver performed by the magazine is not certified by any regulatory agency, nor is it used to establish any sanctioned safety ratings.
Chrysler Group takes seriously any safety concerns and engineers are examining the event to better understand the magazine's claims.

A "Top Safety Pick" of the U.S. Insurance Institute for Highway Safety, the 2012 Grand Cherokee is an award-winning SUV that features Electronic Stability Control and Electronic Roll Mitigation as
standard equipment. It meets or exceeds all government safety mandates and its outstanding
performance has made it the most awarded SUV in history. 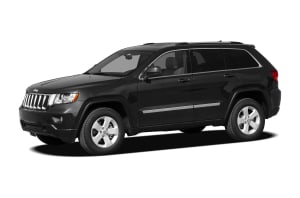