Any car that heavily commits to a certain goal is instantly intriguing. Some chase the fastest lap time. Others aim to accomplish the highest top speeds. For the original Honda Insight, that goal was fuel efficiency. With original fuel economy ratings of 61 mpg in the city and 70 mpg on the highway, it completely obliterated expectations for what a fuel efficient car was capable of at the turn of the millennium. Of course, the EPA has since adjusted ratings for older vehicles, leaving the Insight at 49 mpg city and 61 mpg highway. Regardless, those numbers are nothing to scoff at.

What is easy to forget about the Insight is that it beat the Toyota Prius to production as the first gasoline-electric hybrid vehicle to be sold in the U.S. And that’s not all. It crushed the Prius in fuel economy, too, as the Toyota achieved 42 mpg city and 41 mpg on the highway. These figures may have gone in one ear and out the other a year ago as oil prices dipped below $0 and gas prices fell through the floor, but gas is back to a more normal price now. Maybe you’re thinking about the eventuality of a commute again as the vaccine continues to be distributed. Or perhaps you liked not spending money on fuel over the last year? If so, let’s take a ride on the Insight express. 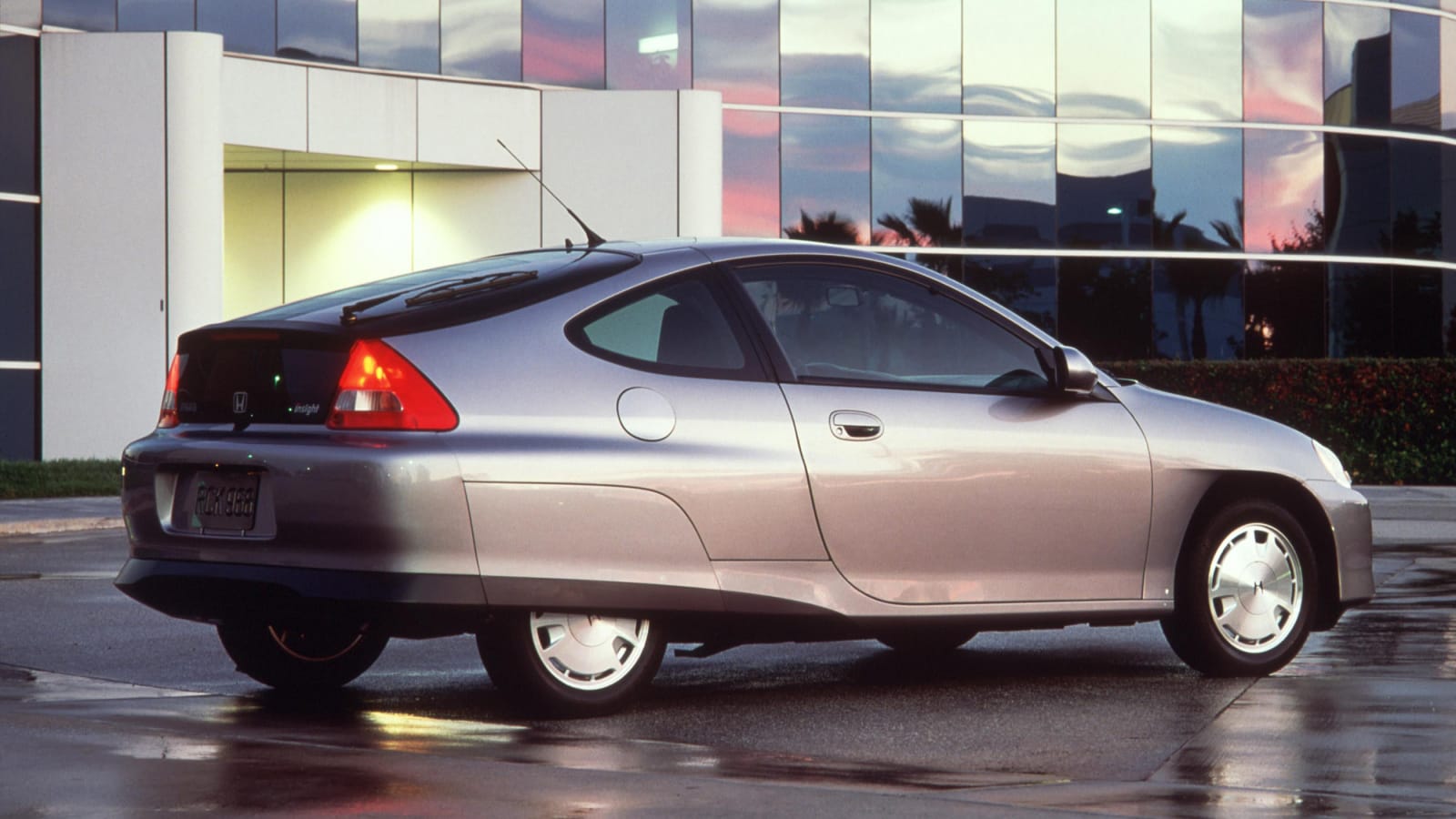 Well, we half-answered that question already. The easy response is fuel economy. But I’d argue there’s more to it than just hypermiling. The Insight can be had (and was initially only available) with a manual transmission. Electronic continuously variable transmissions (like those found in most hybrids today) are typically soul-sucking bits of work without any hint of engagement or fun to them. Honda decided to give folks a five-speed manual transmission to row through instead, so you can actually have fun shifting while you put up big fuel economy numbers. It being a Honda, you’re sure to enjoy the shifting process, but don’t think it’s going to be a fast car. The Insight had a 1.0-liter three-cylinder engine that produced 67 horsepower. It was aided by a small electric motor that put out only 13 horsepower.

The Insight is also a two-door, two-seat hatchback, which instantly makes it cooler than the four-door Prius. Another cool fact: It used the same steering wheel design as that on the Honda S2000. The Insight’s relationship to other Honda/Acura sports cars doesn’t stop at the steering wheel, though. Honda says in its original press release that it used its experience in engineering the all-aluminum NSX to craft the Insight’s nearly all-aluminum body, too. The only exceptions are its plastic front fenders, rear fender skirt and trim pieces. Because of this focus on weight reduction, Honda says the Insight’s body is 40% lighter than it would me if it used its traditional manufacturing processes. And for those looking for the curb weight, know that the 2000 Insight weighed a featherlight 1,847 pounds. If you wanted air conditioning (and of course you do), it weighed 1,878 pounds. 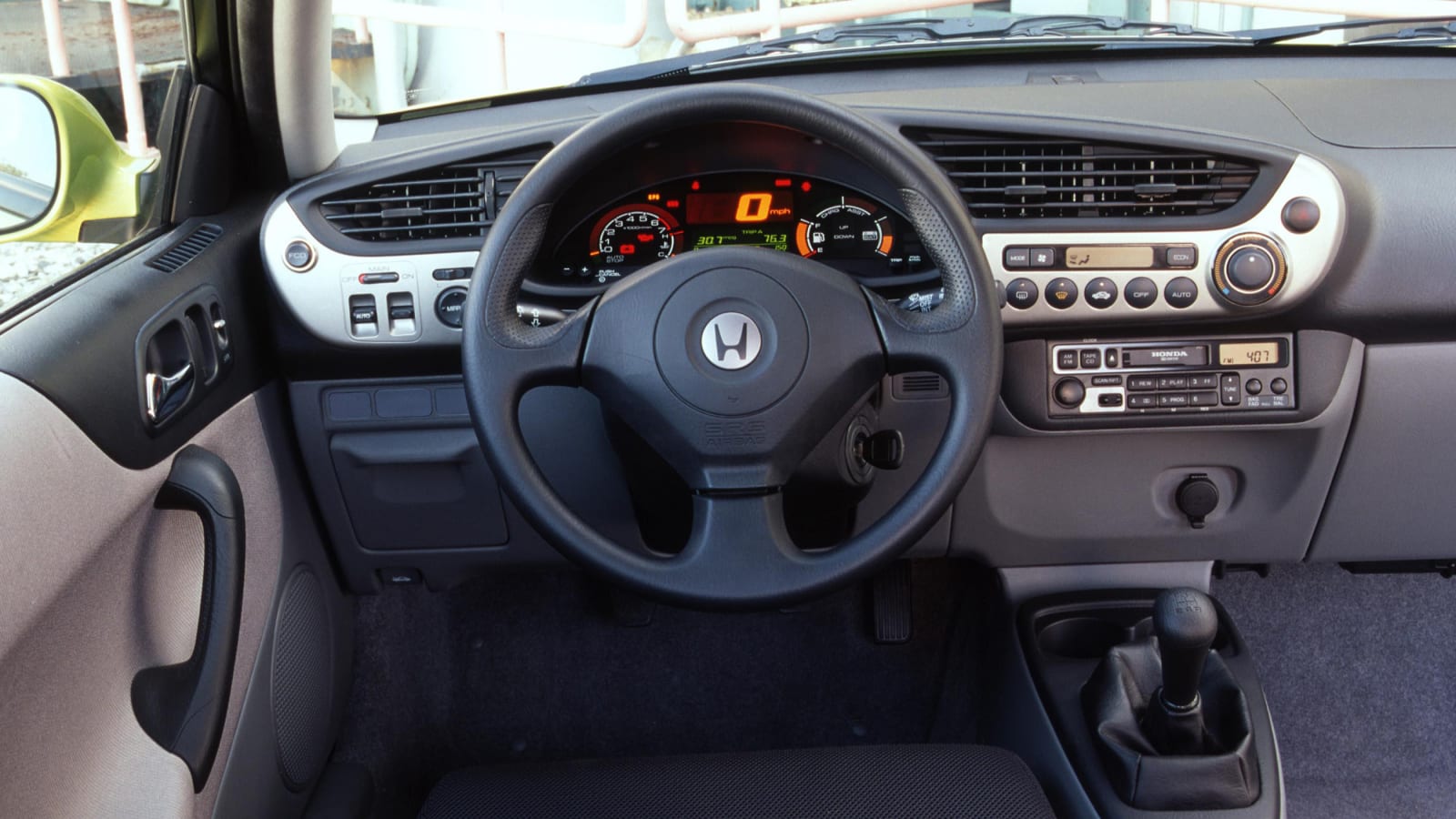 What options do I want?

Unless you enjoy sweating in cars, I’d recommend finding one with the aforementioned air conditioning. Honda introduced an automatic transmission option (CVT) partway through the 2001 model year, but that’s a good one to skip. It got significantly worse fuel economy (45 mpg city and 49 mpg highway), and it will be far less engaging to drive. It’s wildly simple beyond these couple of decisions, as Honda didn’t give people any choices.

There are some color options, though, a few of which you can see here. Notable shades include green, blue, red, yellow and silver. 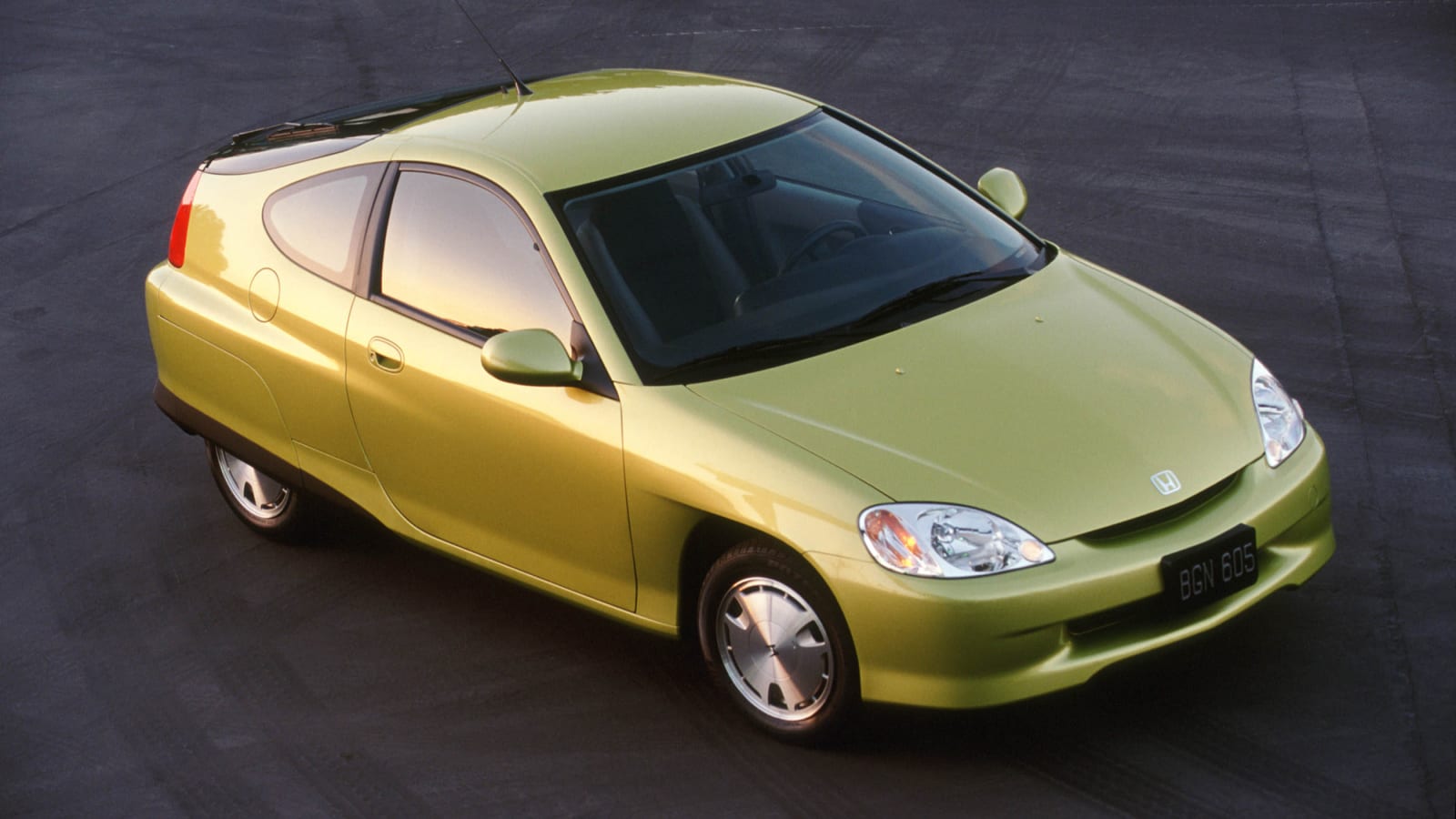 You won’t find a plethora of first-gen Honda Insights on sale today, but there is always a halfway decent assortment to choose from. The car’s limited scope when new made sure it never took off in sales like the Prius did over the years. It requires a buyer of specific taste to be accepting of or enjoy the Insight’s design, too. The wheel spats and ultra-aerodynamic styling (leading to a 0.25 coefficient of drag) made it look quirky and a bit unordinary. For some, that’s a plus.

If an Insight does appeal to you, prices tend to range between $2,000-$10,000 depending on miles and condition. Performance-focused Hondas of its vintage like the Acura Integra Type R and 1999-2000 Honda Civic Si have been on an upward trajectory in value over the past few years, but the Insight has skipped any such rise. The Insight could see a return in popularity one day as the years go by, but most of them are just priced like a used car today.

Our used vehicle listings can be helpful to find a good deal near you. Narrow the offerings down by a radius around your ZIP code, and pay attention to the deal rating on each listing to see how a vehicle compares with others in a similar area. Also note that since the Insight is a semi-rare vehicle, finding one could take significantly more work than picking up an Accord from the same era. 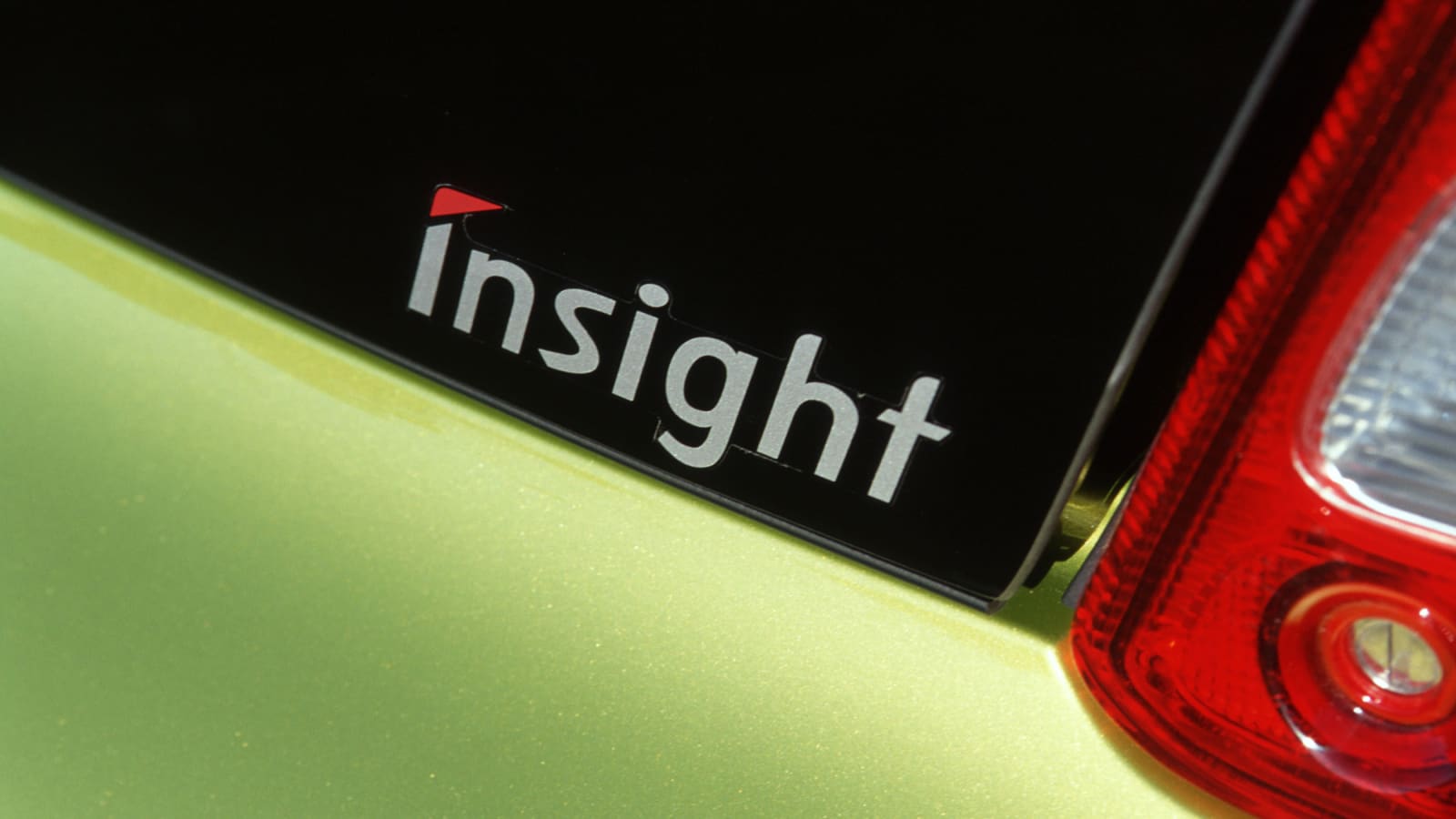 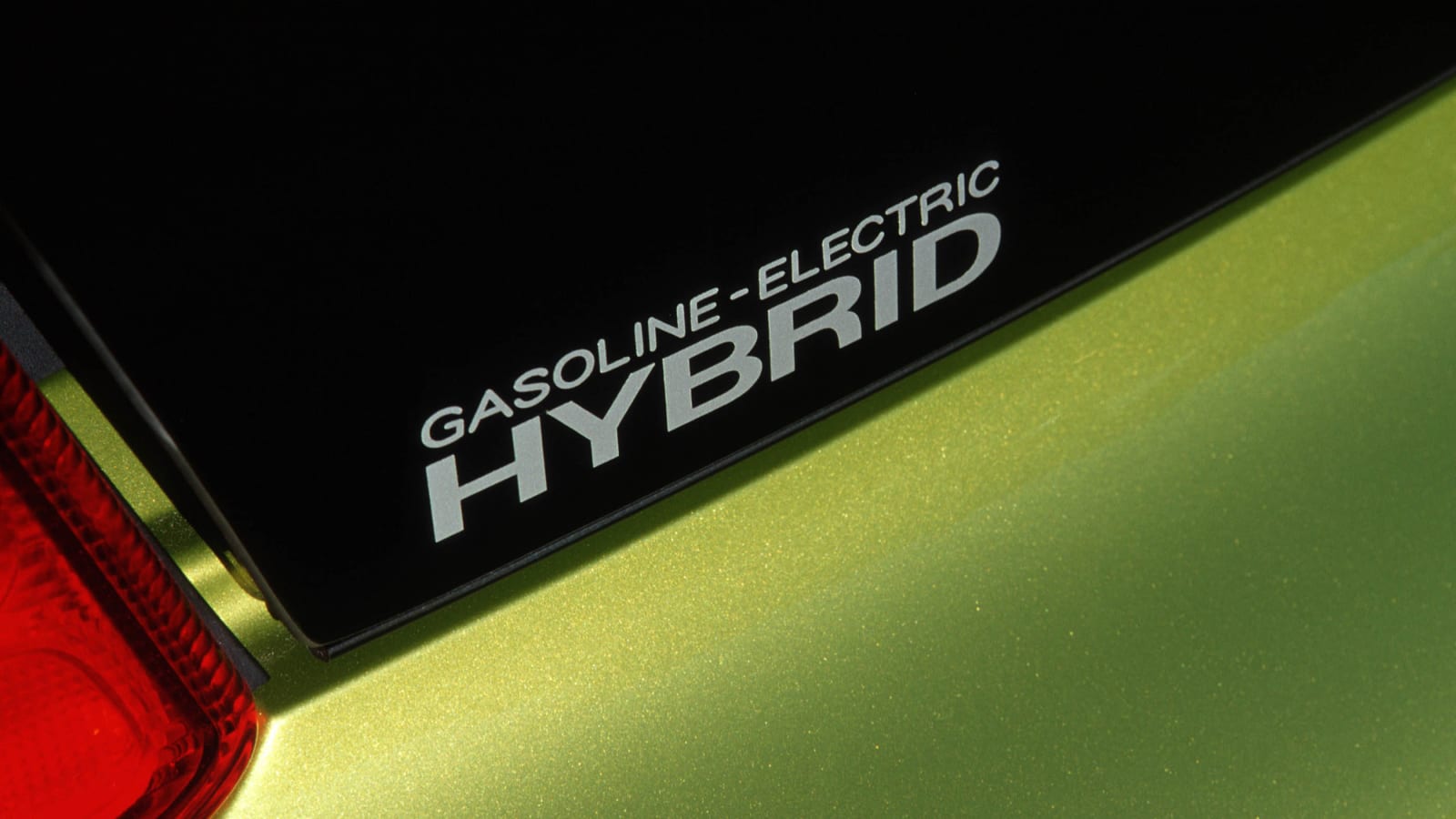 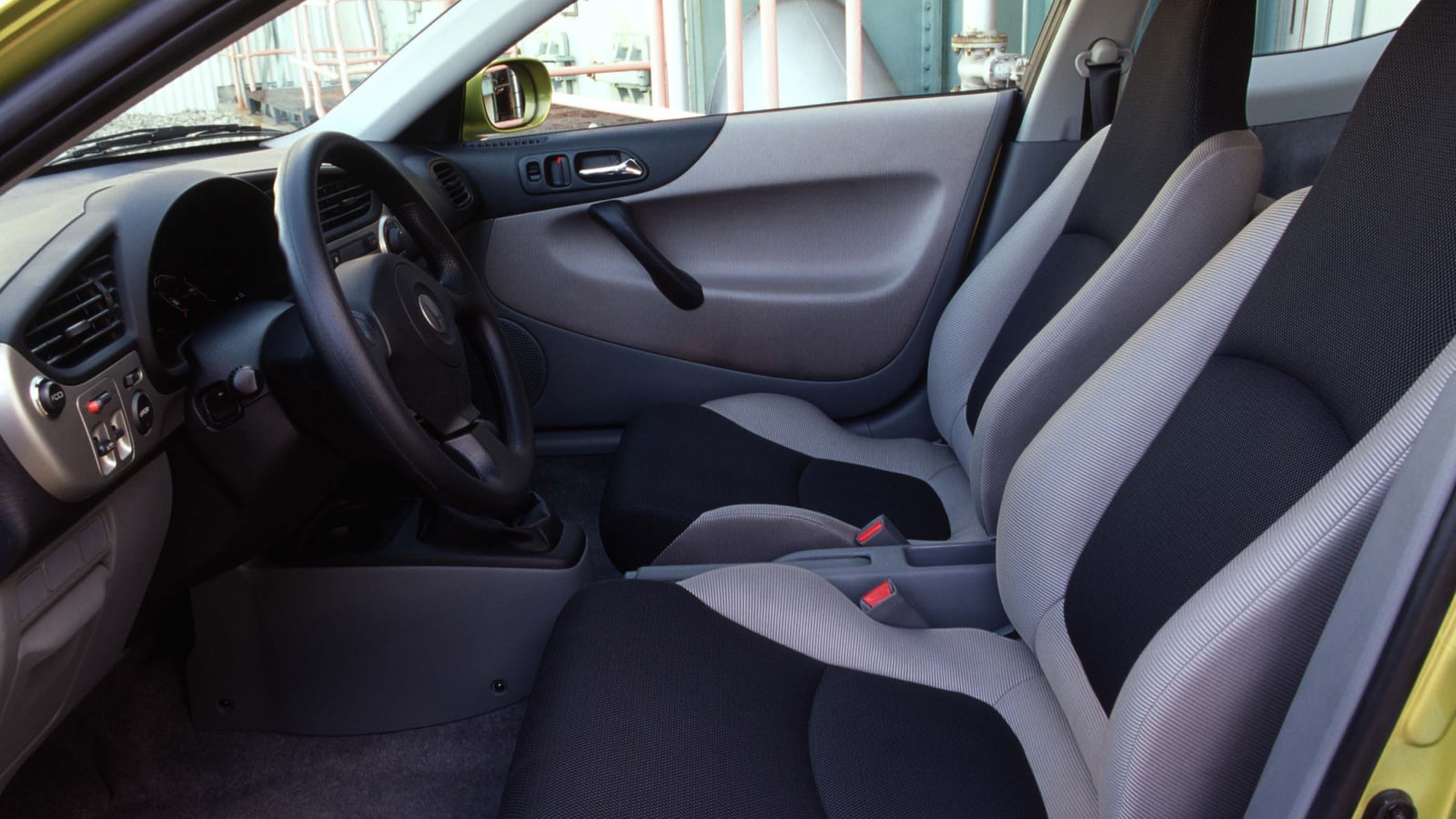 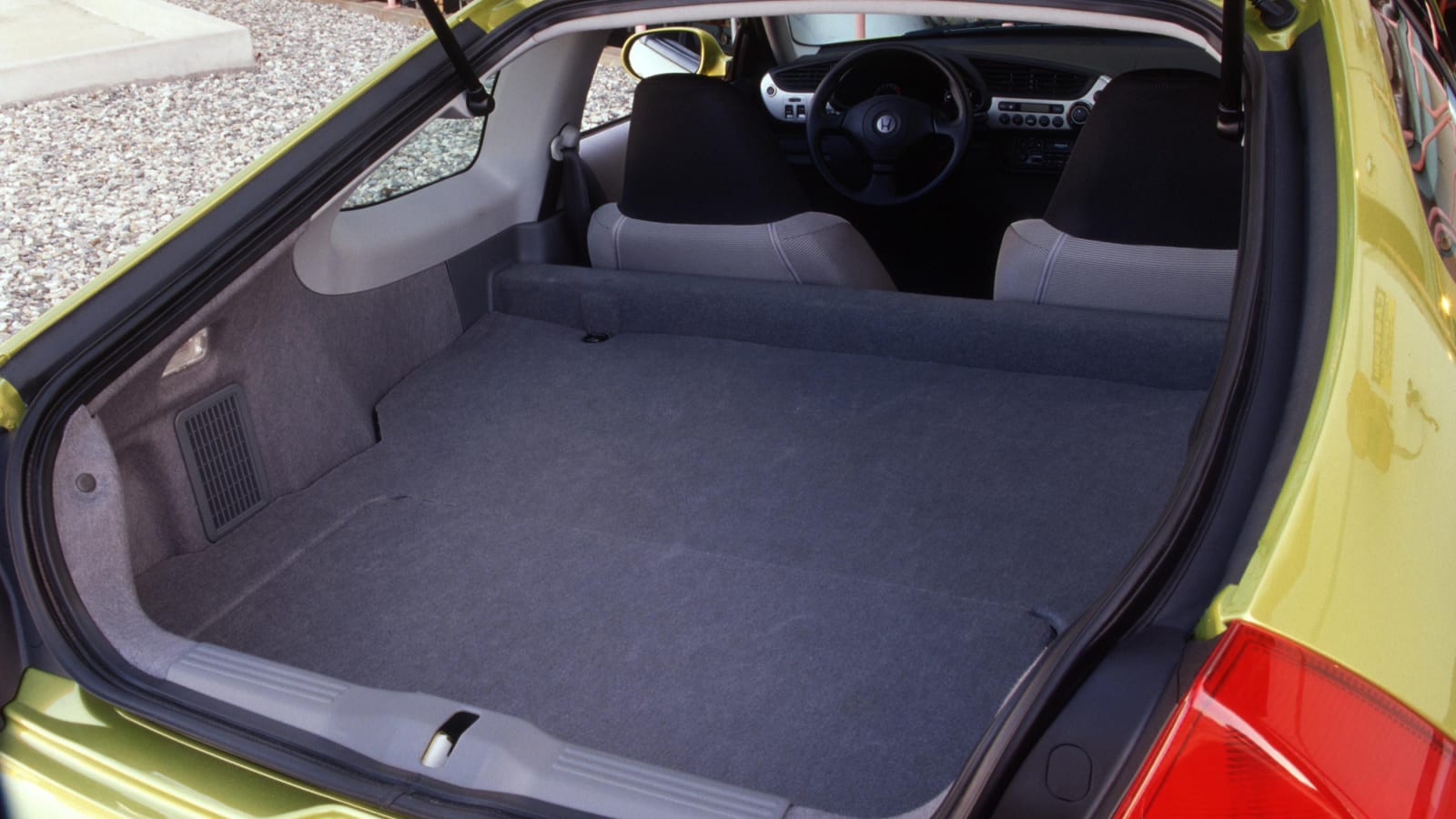 What else to consider?

If you’re in the market for something efficient and cheap, a used Toyota Prius is always one of the first vehicles to come up. Finding something that has actual personality and charm is a little more difficult, but can also be found in the Honda family in the CR-Z. It’s another two-door hybrid coupe from Honda that can be had with a manual transmission. Unlike the Insight, though, the CR-Z looks like a sporty two-door coupe. You can find them online for as little as $5,000 for higher mileage examples, and they’re not a bore to drive!

Very few cars can compete with the Insight from a pure fuel economy standpoint, but if you’re really into going green, an old Nissan Leaf could also be appealing. You’ll have limited overall range, but it could easily be enough for the daily commute. If you do end up going Insight, in addition to the mega mileage, you’ll have a piece of history. It being the first gasoline-electric hybrid car sold here is no small feat, and the car’s appeal, value and longevity will certainly endure. 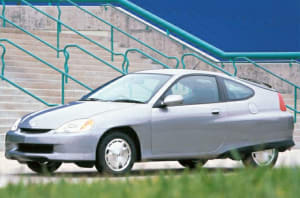