View All Specs
The Dodge Viper is not a comfortable car. Livable, yes. The interior is covered in fine materials. But you still climb over a hot door sill to enter the tiny cabin. And the frequency range of the engine's noises seem specifically designed to cause headaches.

What happens, then, if you remove all pretense of civility from a Viper and add equipment solely aimed at improving lap times? You would have the 2016 Dodge Viper ACR. In terms of achieving its purpose, this car is a absolute success. In many ways it's also the most honest Viper of the current generation.

Prices start at $121,990 (including $2,100 gas-guzzler tax and $1,995 destination), or $32,900 more than the least expensive Viper. In ACR trim, the Viper loses the under-carpet padding, 9 of 12 speakers plus amplifier, carpet and trim from the cargo area, and sound deadening in front of the rear wheel wells. The parts of the interior still covered add healthy amounts of Alcantara or optional carbon fiber. That weight loss is compensated by the addition of go-fast bits like the giant rear wing (or the larger "x-wing" on the Extreme Aero Package), 10-way adjustable Bilstein Motorsports shocks, Brembo carbon-ceramic brakes, a rear diffuser, and a front splitter. Total claimed curb weight is 3,392 pounds in Aero trim (standard ACR trim is 18 pounds lighter), which is within a few stone of the rest of the Viper lineup. The diffuser strakes and leading edge of the splitter are removable, made to be replaced after rubbing on track tarmac and make street driving slightly more practical. 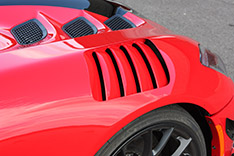 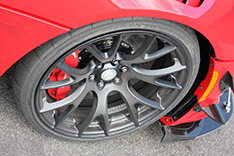 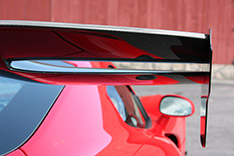 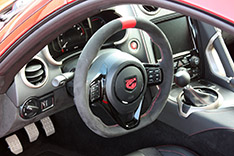 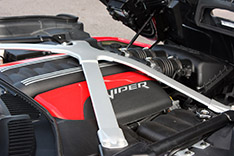 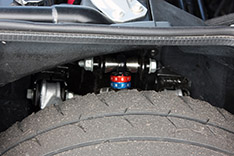 Not that you'd want to drive the ACR on the street, with the lack of noise insulation and spring rates twice as stiff as the Viper TA, but it is street-legal. Dodge claims the DOT-approved Kumho Ecsta V720 tires on the ACR allow faster lap times than some race compound tires.

Our test was limited to on-track shenanigans at Virginia International Raceway. Which is fitting because we wouldn't have anything good to say about driving the car on the street. The ACR is, essentially, a race car sold in the showroom, although with the Viper's 1 of 1 customization program, your custom build can include as many creature comforts as you like.

Lined up in pit lane at VIR, the Viper ACRs for our evaluation blur the air with heat shimmer. All of the test cars have air conditioning, but that shuts off at full throttle with a six-second reset. Even with the Viper's 645 horsepower and 600 pound-feet of torque there is a lot of full throttle at VIR. And on days like this you really don't care about the temperature, at least not in our three-lap stints.

Few road cars produce downforce like the ACR - a claimed 1,228 pounds at 150 mph - and fewer still live up to the cliche of glued to the road. In slow corners the Viper ACR feels like it's crawling, even if the howling tires say you're on the limit. The sensation in fast corners is more proportionate to speed, but the car is so stuck to the track it feels like all reward, no risk. Full disclosure, your intrepid writer lifted entering VIR's famous climbing esses in a self-preservation reflex. Safely through, we wished we'd gone in ten miles per hour faster.

Much of the Viper ACR's magic is due to the tires. Kuhmo worked with Dodge for two years to develop the compound. Jeff Reese, who heads up vehicle development on the Viper, explained that the rubber is designed for maximum g's, admitting that the turn-in is less sudden than in the Viper TA. For those keeping score at home, the TA is also faster in a straight line. Drag-limited to 177 miles per hour, though, the ACR has the slowest top speed of any Viper.

The TA might out-pull the Viper ACR on VIR's main straight, but the ACR can brake a whole lot later. Brembo six-piston calipers clamp down on pads with the largest swept area of any Viper brakes. The carbon ceramic rotors are so big they necessitate a one-inch increase in front wheel diameter. Combine the aero, tires, and unlimited fade resistance and the ACR takes corners deeper than an Ice Cube rhyme. 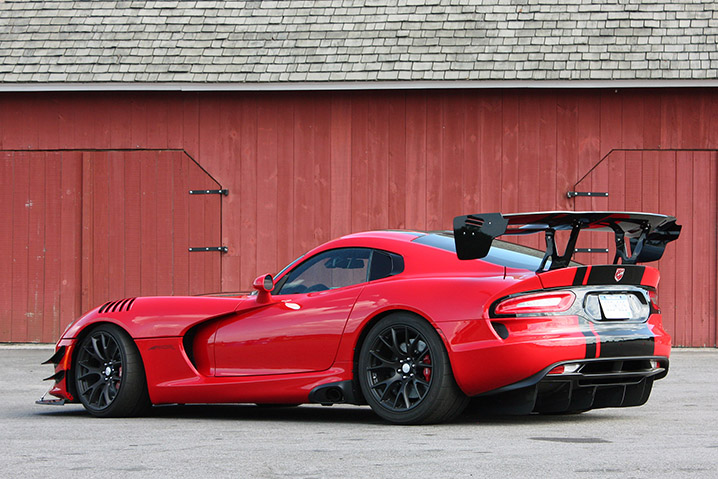 Going back to the turn-in statement, the ACR does not lack for responsiveness. We'd describe it more as a car that moves with a cohesive fluidity, which seems odd for something so brutal. Our last session around VIR's Grand Course brings to light an important characteristic of the Viper ACR: it's adjustable. It's fast in any configuration, but get the settings right and it goes even faster. For our final laps Dodge removed the louvers above the front tires and flattened out the adjustable rear wing by one notch, both steps to switch the aerodynamic balance forward. Those small changes made the front end more eager to change direction with no apparent loss in stabilty.

Stripping down the Viper to track-specific elements reveals the car's true nature. Driving fast in this Viper feels more rewarding than the numb sports cars of the high-tech modern era. On track, the ACR is amazing. You could drive it on the street, but that would be a waste of both your time and the Viper's.