This is a dynamite car. Shocking speed, sublime handling, interesting design and plenty of comfort make this EV turn heads and raise pulses. Yes, we’d pick this over a Tesla Model 3.

The dog was patient enough as she waited for her human companion to finish his inquisitive orbit of the Polestar 2. The guy had no idea what it was. The badge, finished in the same paint as the rest of the car, was unknown. The car's name, appearing only on stickers on the front doors accompanied by "Battery Electric Vehicle," wasn't any more illuminating.

"What the hell is a Polestar?" he was quite clearly pondering to himself. "And this is the sequel? What was the first?"

And such will be your life should you take the plunge and bring home a Polestar 2. Be prepared to answer questions about this unknown mystery car you've bought. Yet unlike other startup electric car companies, of which there are many, Polestar isn't really a new thing. There's history behind it and a solid corporate foundation underfoot.

Polestar was previously to Volvo what AMG is to Mercedes, a separate high-performance tuning firm eventually brought under the corporate wing. And while range-topping Volvos today wear the "Polestar Engineered" badge, the name has been applied to a new, all-electric, performance-oriented luxury brand. Its engineering and design facilities are adjacent to Volvo's in Gothenburg, Sweden; the cars are made in China, home to its parent company, Geely.

The Volvo connection is best recognized in the Polestar 2's styling, most notably the Thor's Hammer headlight treatment. There's a much greater visual separation than was the case with the Polestar 1, which was essentially a coupe version of the Volvo S60 sedan, but there's certainly common DNA. In fact, the design started as a quirky concept for a new Volvo that was deemed too radical by company brass, only to be resurrected when Polestar CEO (and former Volvo design chief) Thomas Ingenlath sought something that could work for an entry-level Polestar. This, after the decision was made to make the brand more attainable and not like a Scandinavian Aston Martin as was originally planned. 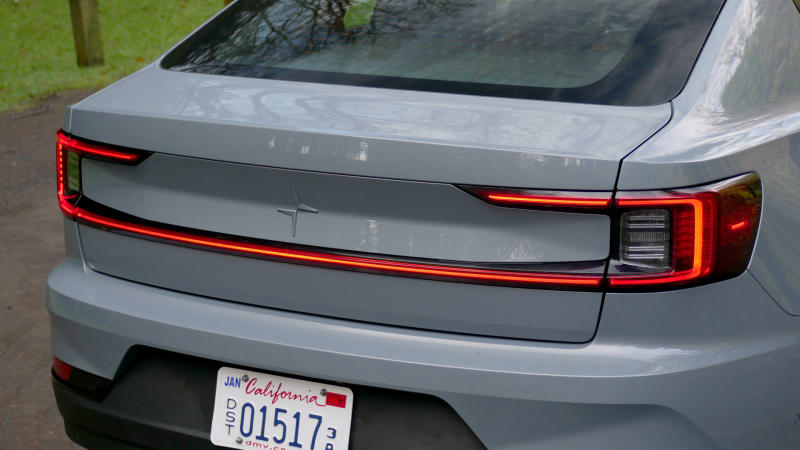 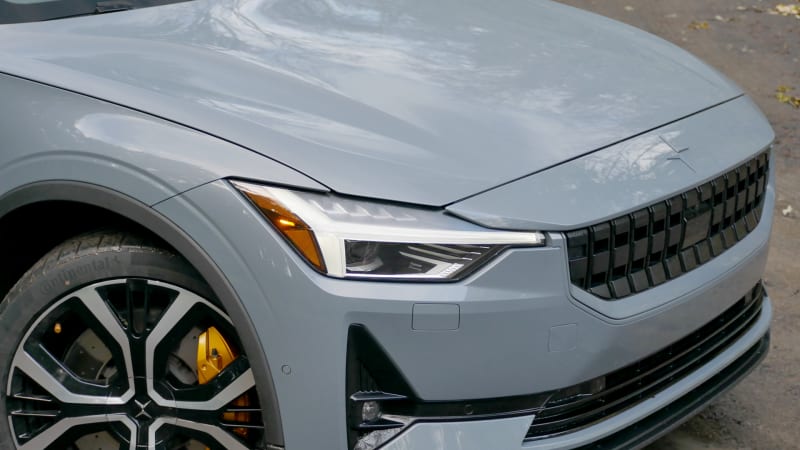 There's really nothing to indicate the Polestar 2 is powered solely by electricity, apart from those stickers (likely just for press vehicles) and an elevated ride height that not only provides a masses-pleasing whiff of crossover, but allows for the battery pack's under-floor placement. That pack, the only one available, has 75 kilowatt-hours of usable capacity (78 kWh gross total) and an EPA-estimated 233 miles of range. Efficiency is rated at 37 kWh hours per 100 miles.

As just one comparative data point, the Mustang Mach-E AWD Extended Range I recently reviewed has the exact same efficiency rating, but an estimated 270 miles of range due to its bigger battery. Driven on the same driving route in similarly chilly conditions, I saw an effective driving range of 174.4 miles in the Polestar and 220.6 in the Mach-E – a bit wider than the EPA differential. In terms of efficiency, the Polestar 2 got 43.0 kWh/100 miles while the Mach-E got 39.9 kWh/100 miles. So, the Ford was more efficient.

What's the deal? Well, besides the battery difference, I'd have to imagine it's because I was able to drive the Polestar 2 much quicker in the mountains thanks to it feeling like the lighter and lither car (more on that in a moment) and its big-time power that just begs you to stay heavy on the throttle. Be it gasoline or electrons, a heavier foot will result in worse efficiency. Its motor puts out 408 horsepower and 487 pound-feet of torque, which blows all four doors off the Mustang (346 hp/428 lb-ft), and results in a 0-60 time of 4.5 seconds. Unlike the Ford and much like most Teslas you'd like to compare, the Polestar delivers intense, punch-to-your-chest acceleration. I could actually feel my lungs reacting or compensating or doing whatever lungs do after momentarily finding themselves strapped to a Saturn V. In other words, yeah, it's fast.

And it keeps it up when you want to continue going fast around corners. After all, that is part of Polestar's mission statement as a performance car brand – it's worried about more than just a 0-60 time. The steering, with multiple settings, was just left in "Firm." It's appropriately weighted, linear in its build-up and just feels natural. It's also superior to what you'd get in a Volvo, the Mach-E or a Tesla Model 3. 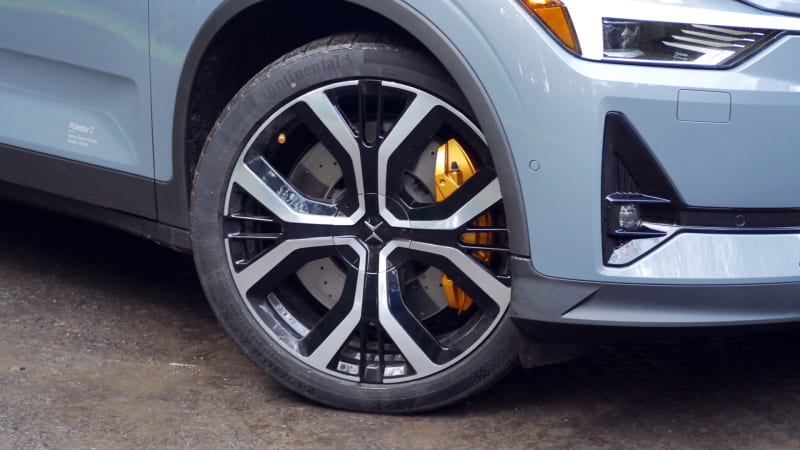 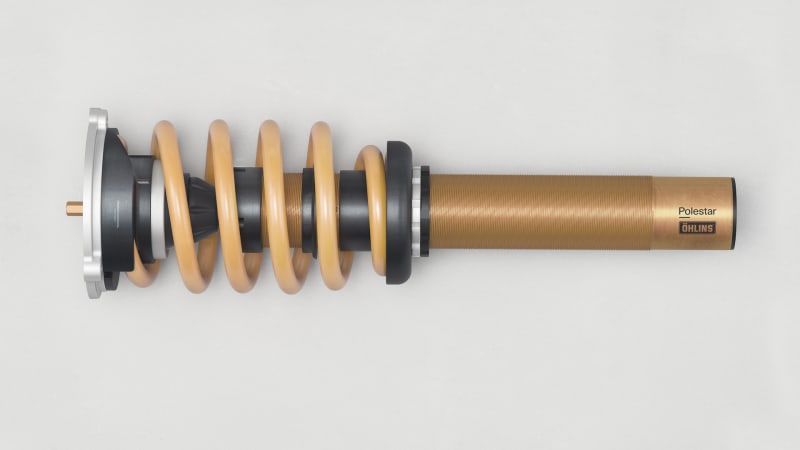 The test car came equipped with the $5,000 Performance package, which includes 20-inch forged alloy wheels, Brembo front brakes and Öhlins Dual Flow Valve dampers not unlike those found in, ahem, the Ford GT. All of that, plus Polestar's general tuning efforts and a low center of gravity collectively result in a car that stays remarkably flat and composed through corners. I might have been leaning a bit in my seat, but the car sure wasn't. Grip is tremendous, too – I kept being able to push faster and faster through tight corners and carousels despite damp roads. This is a serious sport sedan, full stop, no need to add "for an EV" as a qualifier.

But, here's the catch. Those trick Öhlins dampers may be adjustable with three settings, but rather than simply pressing a button, you literally have to climb under the car, remove a panel and turn an actual knob. Now, some people will go, "Sweet, something to wrench!" Most others will say, "I will never do that."

Before I got the Polestar, a company rep said the car would show up with a "pretty stiff setting" to show off the handling. I asked them to instead set it to the more comfort-oriented mode (one of three), knowing that Volvo's past attempts at sportier suspension on big wheels usually results in a firm, nervous ride. Managing Editor Greg Rasa would later drive this very car with that "stiff" setting up in Seattle and confirmed that it lived up to its name. It's not jittery and won't beat you up over broken pavement, but he was also being more attentive than usual to avoid it. As such, I'm comfortable in declaring that the "comfort" setting is perfect. It's not some land-yacht setting; it's more like an old BMW. It's on the firm side, but well-damped, tolerable on broken pavement and you'd have no problem driving it for a very long time. And again, the handling with that setting is exceptional. I guess it's not a bad thing that the dampers are adjustable, but I'd highly recommend making sure they're set for comfort. Sadly, no Autoblog editor has sampled the non-adjustable base suspension to know where on this spectrum it lies. 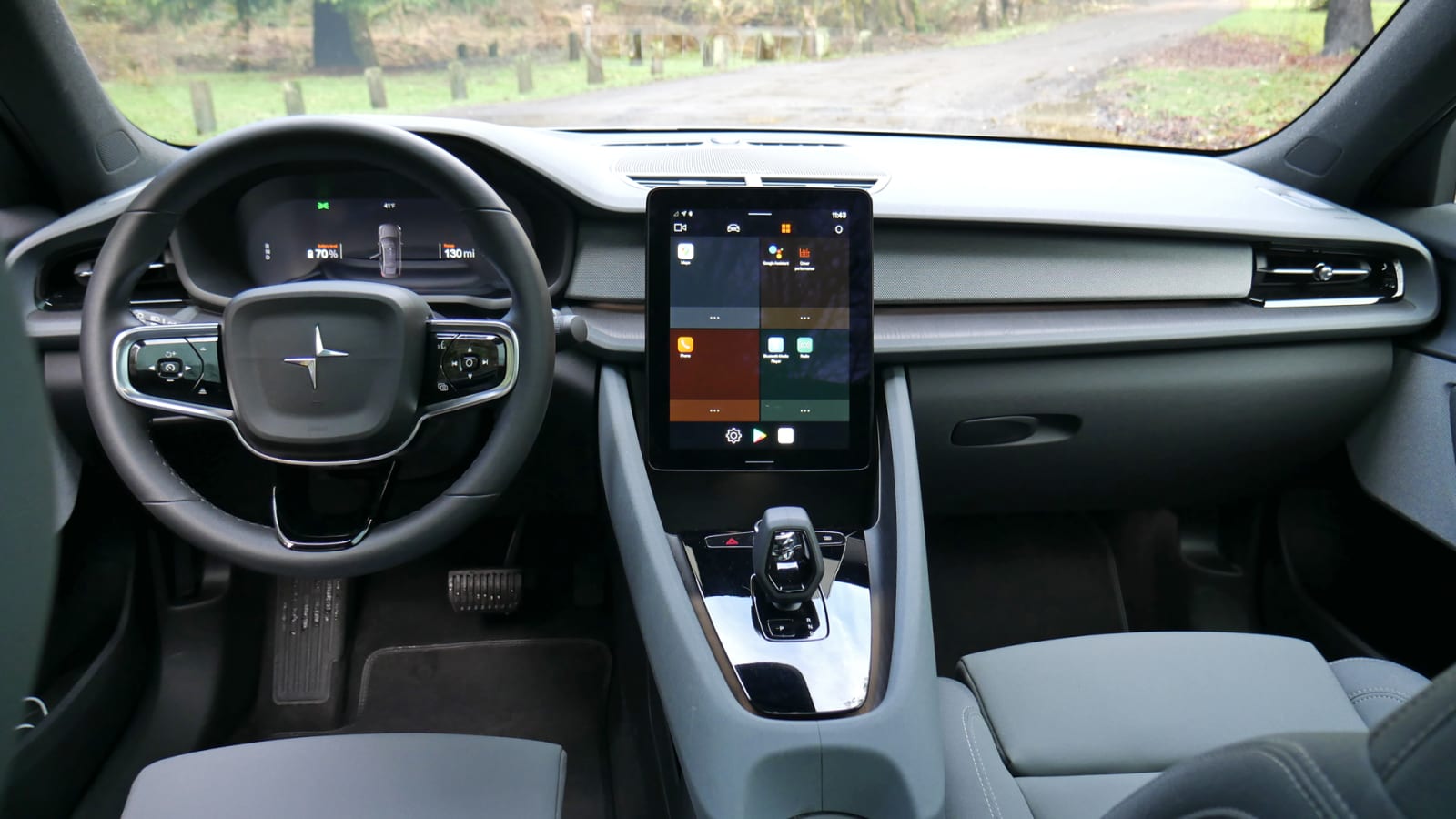 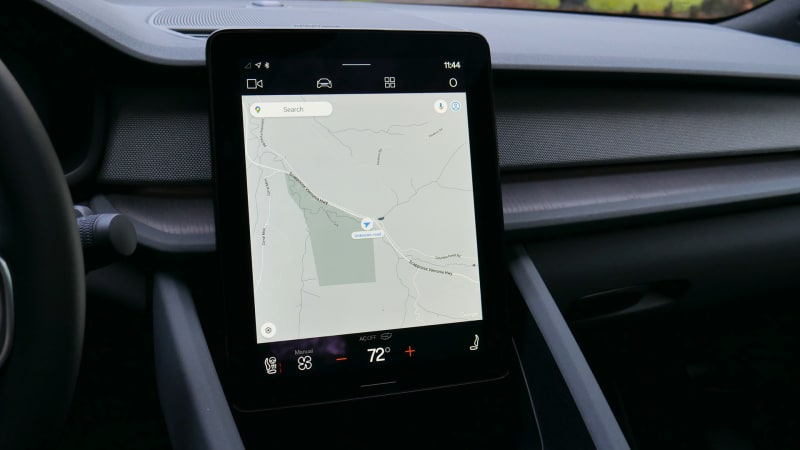 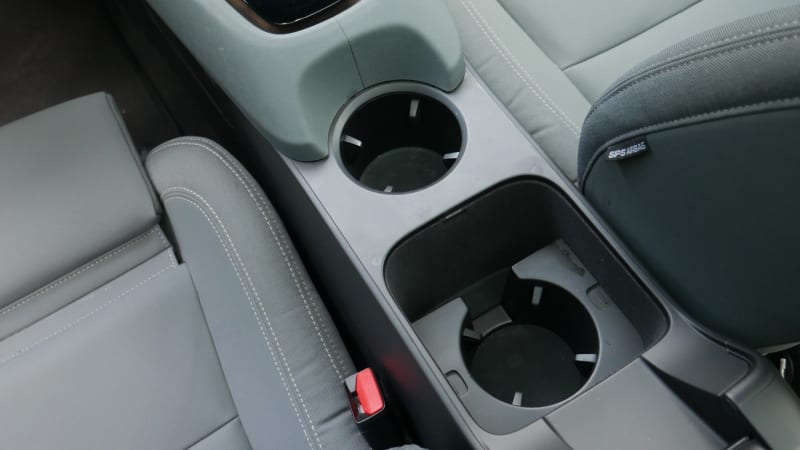 Like other EVs not named Porsche or Audi, the Polestar offers one-pedal driving. Besides it being great for driving in traffic, it surprisingly adds some extra involvement when driving on a mountain road. You start to challenge yourself to lift off the accelerator at just the right moment and just the right amount to maintain a good rhythm and speed. Similarly, around town, you learn to perfectly time lifting off when approaching red lights. It may sound nuts, but it's oddly engaging. And cars are increasingly less engaging these days. Anything extra is a good thing.

Which is something the interior could use: something extra. There's some switchgear borrowed from Volvo and a shared minimalist Scandinavian aesthetic, but unlike the Polestar 1, the 2's interior is unique. The design is certainly attractive, especially in our test car's distinctive blue/gray hue. It's also the first car, period, to run Google's Android Automotive Operating System, which it does through an 11-inch vertically oriented touchscreen. Though a totally new system to me, it was far more intuitive to quickly understand than the typical infotainment system.

Interior storage is not great, though, and some materials are suspect. The rising center console in particular is hard and rough in texture. There's even flaring around its inner edge. The Polestar 2 starts $61,200, including destination, and our test car rang in at $67,400. Even with at least $7,500 in tax incentives, the cabin is just not indicative of a car at that price. In fact, a comparably equipped Volvo S60 has a much nicer cabin despite costing thousands less.

And indeed, that price tag is the Polestar 2's biggest hangup. The Polestar has less back-seat and cargo space than the Mustang Mach-E; and cabin quality that certainly isn't better, to the tune of tens of thousands of dollars. Then there are comparisons to the Tesla Model 3. Sure, its build quality is very suspect, but it's much cheaper, will go much farther and apart from its base model, is quicker in a straight line.

Now, is the Polestar 2 ultimately the superior performance car to them both? Absolutely, and that generally warrants a heftier price tag. At the same time, though, its stealthy design and subdued color palette don't sufficient convey its performance credentials. I'm not suggesting an M3's snout or a Cadillac Blackwing carbon package, but it needs something more to provide someone like my dog-walking neighbor with a clue that this mystery car is really a punch-to-your-chest, mountain-road-carving sport sedan. Otherwise, I'm afraid this brilliant car gets lost in translation. 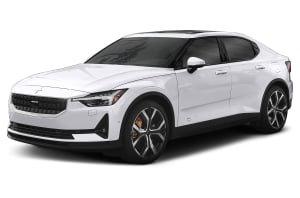