The Volvo V60 T8 Polestar Engineered has a lot going for it right out of the gate. First, Volvo styling is hard not to like, and its wagons are quite possibly the best examples of the automaker’s current exterior design. Second, this is the T8, the plug-in hybrid, which adds electric range and power to the mix. Third, this is the Polestar Engineered model, which means this is the performance version that very few customers will get their hands on. Hard to argue with a sexy, plug-in, hot wagon with 415 horsepower and 494 pound-feet of torque, at least on paper. The one possible downside is the $68,295 entry fee. We were able to get one at the Autoblog office for a week to see if it all comes together as hoped, and if it lives up to the price tag.

The styling is already familiar, but I sure love the way it looks in my driveway. I found myself cracking open the front door to gaze at that long roof and sculpted front fascia. The little touches like the flat, square Polestar badge on the grille and the gold brake calipers peeking out from behind the wheel spokes helped to draw my eyes a bit longer.

Inside the car, it’s a similar story. I’ve spent some hours inside V60s, and while this one’s gold seatbelts are the only real novelty (and a Polestar-specific flourish), I still find the tidy interior design refreshing and thoughtful. We’ve talked a lot about Volvo’s infotainment system here in the Autoblog offices – and the same praise and complaints remain here – but for the first time that I can remember, I actually plugged my phone in and recalled how good the Apple CarPlay interface is in this system. The screen’s size and vertical orientation help, too. With CarPlay on, the Apple interface uses the bottom half of the screen, while the top half features a miniaturized version of the Sensus main menu. You don't have to back out of CarPlay to play with any vehicle functions.

Despite the seeming complexity of its electric all-wheel-drive system (with the gasoline engine motivating the front wheels and the e-motor powering the rear, and not always at the same time), in practice, the T8’s various drive modes are simple to use. "Hybrid" is the default drive mode, maximizing efficiency when possible, and providing extra power from the gas motor up front when necessary. "Constant AWD" mode is what it sounds like, keeping the car in all-wheel drive, with the only drawback being that this requires constant operation from the gas engine. 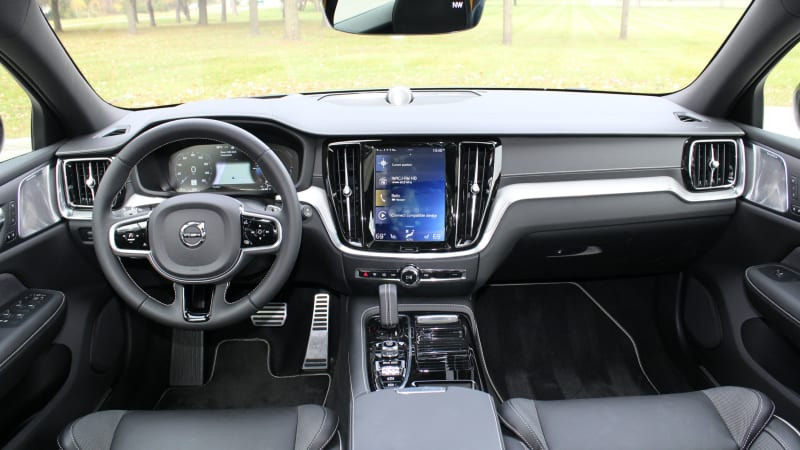 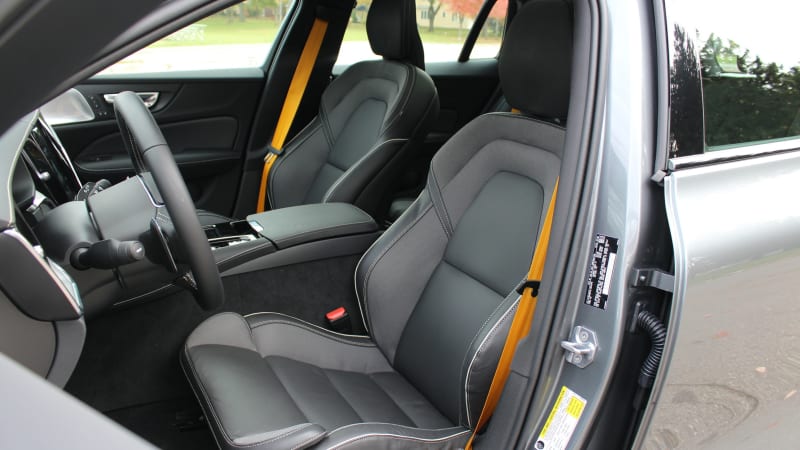 "Polestar Engineered" is the performance mode, and it’s a riot. As you’d expect, it uses the gas and electric motors for maximum power, efficiency be damned. Acceleration is brisk, and there’s no hesitation as the electric torque and supercharger provide power down low, with the turbocharger keeping the power coming higher in the rev range.

The one thing lacking is a pleasant engine note as the internal combustion motor's sound is rough. Shifts are buttery smooth, but something with a crisper action for spirited driving would be preferable. There are paddle shifters on the back of the steering wheel if you’d like to change your own gears, and they respond quickly but don’t provide that snappy satisfaction in the resulting low-drama shift.

"Pure" is the setting you use to atone after you’ve had your fun with the "Polestar Engineered" mode. This relies on the electric motor alone as much as it possibly can. We found it difficult to keep the gas engine from kicking in — cutting through a gap in cross-traffic is a surefire way to ruin the quiet, electric experience. Sometimes, the system would quickly deactivate the gas engine a few seconds later, but other times it kept running long enough that we switched out of and back into "Pure" mode to get it to settle down. 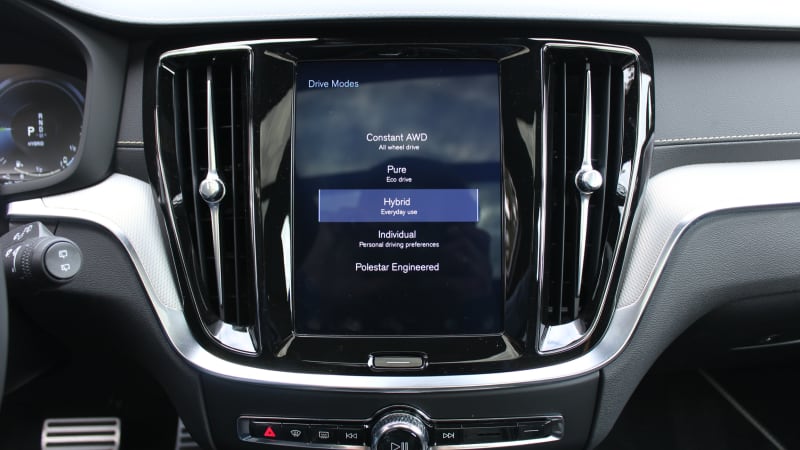 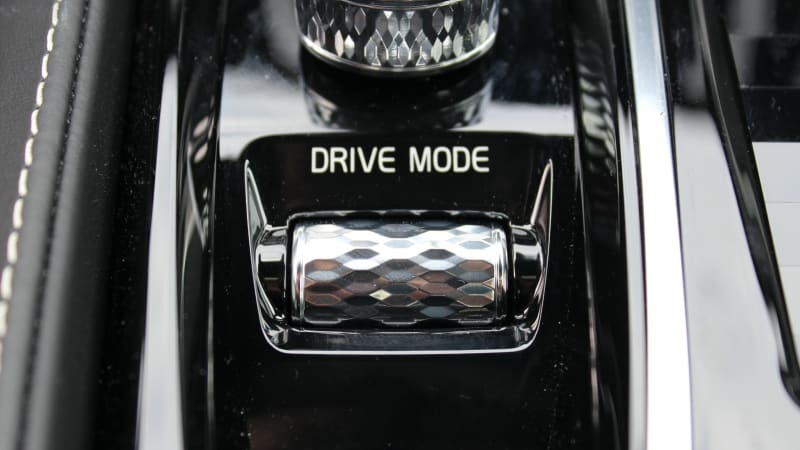 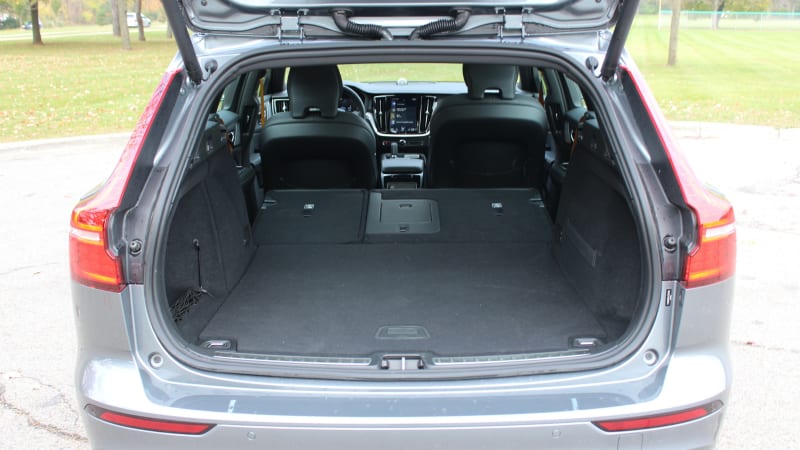 With very little tire sidewall, a lot of the road surface gets transmitted into the cabin. The V60 on 19-inch wheels and sport rubber would be quite punishing on Michigan’s pocked roads if it weren’t for that comfy interior. That said, the tires are incredibly quick to settle down once past the imperfection, and the Öhlins suspension works expertly at allowing the tires to maintain traction seamlessly between bumps and divots — luckily so, as tweaking suspension settings means manually adjusting the dampers from outside the vehicle.

If you recall Joel Stocksdale’s first drive of the Volvo S60 T8 Polestar Engineered, he noted an issue with the brakes as they blended — or rather failed to blend — the regenerative feel with that of the mechanical brakes, resulting in an unsmooth and rather jarring experience. As Alex Kierstein pointed out in his drive of the XC60 T8 Polestar Engineered, Volvo tended to that problem by switching all 2020 T8 models from vacuum-boosted brakes to a hydraulic system. The result in the V60 is a brake feel that is unburdened by any of that weird hybrid unnaturalness you might feel in other cars that use regen. The brakes were developed with Brembo, and the stopping power is definitely there provided you’re willing to use the force required. The pedal is stiffer than you’d expect, but a little muscle memory fixed that after a couple days of driving. 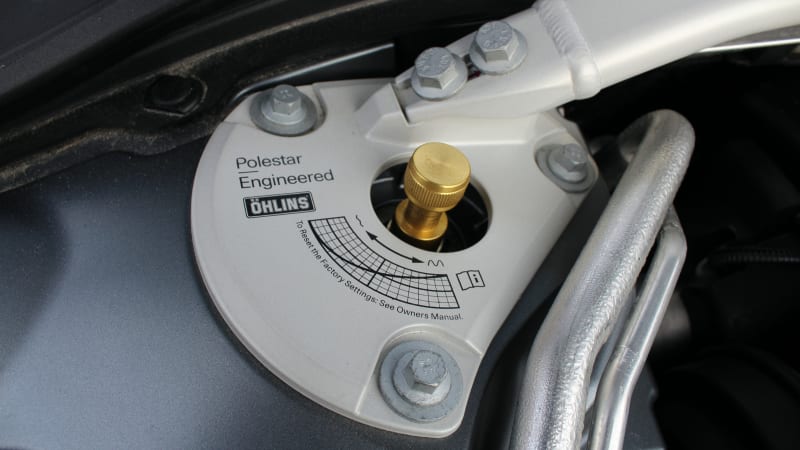 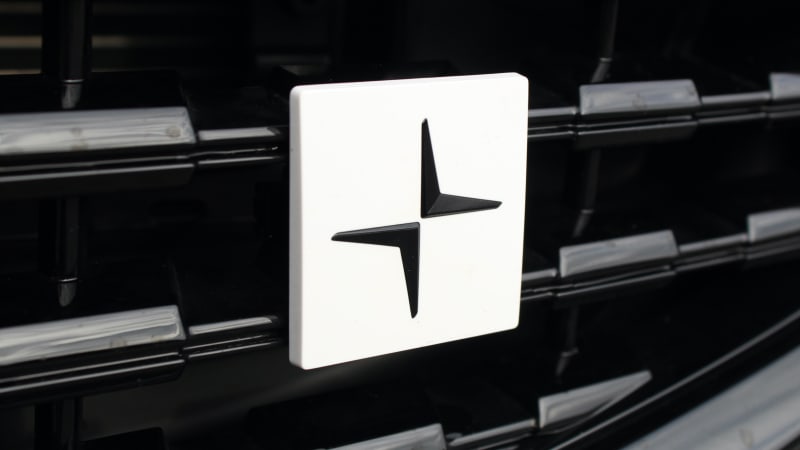 Despite the anticipation for its arrival, I haven't missed the V60 since its departure. Its performance and plug-in powertrain are still a plus in my book, being Senior Editor of Autoblog Green, but the Polestar Engineered variant as a whole is flawed. For example, the rough ride — at least as tested on Michigan’s perennially crappy roads — is fine for hardcore fans, but doesn’t bring enough of a handling advantage to justify itself. Pushing $70,000, the price is hard to swallow, too, especially since it doesn’t fix shortcomings like the rough gasoline engine. And for a PHEV, I’d prefer something that offered more of the EV experience, without the internal combustion engine inevitably butting in. That issue’s not exclusive to the Polestar version, but it is what keeps this from offering the best of both worlds, ICE performance and EV smoothness, at the driver’s command.

The idea that this isn’t a crowd-pleaser is fine for Volvo, if a little unexpected from the brand. The V60 Polestar Engineered obviously isn't meant to be a volume seller. Instead, it showcases the lengths Volvo is willing to go to indulge a subset of buyers who, like the folks at Volvo, don’t necessarily approach cars the same way as the rest of the world. Now, how about the rest of us?

Sadly, Volvo doesn’t offer a non-Polestar V60 T8 like it does for the S60 sedan, as that’d be the one I’d most like to own. Give me the plug and an extra dollop of acceleration, but let me keep the comfortable ride and clean looks, as well as the difference in price. As someone who has lived with Volvos in the past, that seems like the more Volvo thing to do. 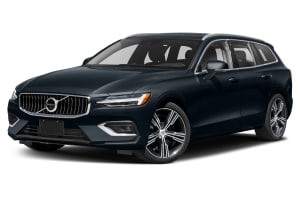